After standing in Bitcoin’s shadow, Ethereum and its native cryptocurrency Ether (ETH) are finally in the spotlight of the crypto market again, recently reaching a new all-time-high. You might be wondering why ETH is suddenly taking off, so we are sharing some of the reasons for Ethereum’s growth.

Before we dive into Ethereum’s rise, here’s a quick background story. Basically, Ethereum is an operating system for decentralised applications such as smart contracts. It was launched by Vitalik Buterin in 2014. Ether is a cryptocurrency running on the Ethereum network. One of the goals of Ethereum is to further advance use cases for blockchain technology. You can learn more about the technical background of Ethereum in this Bitpanda Academy lesson. As you can see in the price chart below, ETH - like so many other digital assets – has experienced noticeable growth in the past few months. But let’s figure out what has led to this week's record levels. 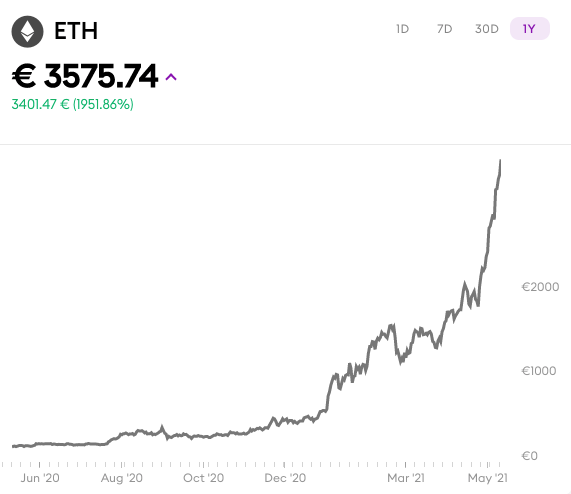 1. Ether is benefitting from the NFT boom

As mentioned before, one of Ethereum’s objectives was to drive the usage of blockchain technology. Non-Fungible Tokens are a current example of how blockchains can be applied in a more mainstream way. NFTs are secured by the Ethereum blockchain and bought and sold via Ether. Hence, Ether’s price has been driven by the buzz around NFTs in the arts, sports and celebrity world.

2. Hype around the Berlin Hard Fork

In March, the Ethereum foundation announced its next hard fork (which in basic terms means software upgrade) called “Berlin”. One of the main aspects of the Berlin hard fork was to improve security. When it was launched in April, ETH’s price peaked, indicating growing trust in Ethereum as a blockchain ecosystem.

The 14th of April was not only the launch of the Berlin hard fork, but also the day of Coinbase’s direct listing on NASDAQ. One of the biggest crypto platforms being listed on the stock exchange pushed digital assets like Bitcoin or Ether even more. Both cryptocurrencies reached all-time-highs in the days leading up to the Coinbase listing.

Cryptocurrencies as a whole are on the up, as you can see by the development of our Bitpanda Crypto Index 25. This index consists of the top 25 cryptocurrencies based on their price and market cap and clearly illustrates the rise of digital assets in the past months. Part of that can be attributed to the overall growing interest in personal finance and investing, but also thanks to Bitcoin and other crypto-assets making their way into the mainstream world. Ethereum is riding this current wave and strengthening its position as the second-most popular cryptocurrency after Bitcoin. 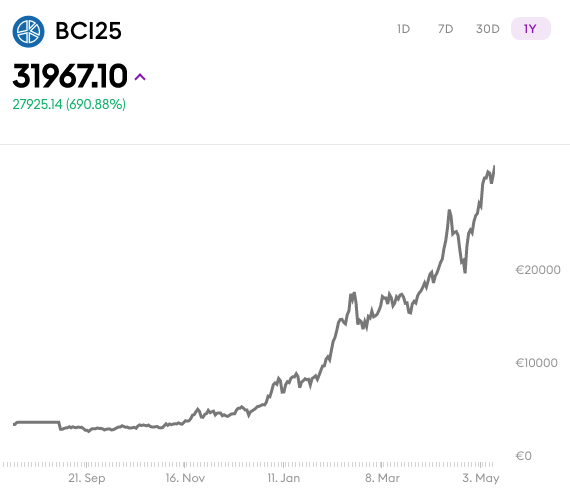 Should you invest in Ether (ETH)?

With its strong focus on blockchain applications, Ethereum and its native asset Ether have gained a lot of trust in both the crypto community but also from retail and institutional investors. However, as with Bitcoin and other popular coins, ETH has seen lots of volatility. Nonetheless, there are a lot of applications, especially with the DeFi space running on the Ethereum blockchain and with more and more sophisticated players entering the arena. There are, of course, other smart contract platforms out there who are more or less aiming to do the same as Ethereum. Ethereum has still managed to stay relevant over the years. If you want to take advantage of the cost averaging effect, you could set up a savings plan in your Bitpanda account and learn more about Ethereum here.