Arweave, the pioneer of distributed data storage in the spotlight

Since the foundation and demise of the Library of Alexandria in Egypt in the late 3rd century BC, humans have been trying to create information archives that can survive forever. The Arweave project is a community-operated, distributed data storage protocol based on Blockweave technology that has set out to remedy the shortcomings of digital storage as we know it. Just recently, the project made global headlines when Arweave set out to build a censorship-resistant ledger of history to document the political events in Ukraine.

Arweave in a nutshell

Arweave was originally founded in 2017 as Archain; a protocol that allows users to permanently and sustainably store data with one low upfront fee. The project is designed to store files on a distributed network of computers by matching participants in the network who need to host content or store data with those who have hard drive space to spare.

All data stored is backed by sustainable funding, ensuring the stored data is available to users, ideally forever. Arweave is well aware of the challenges inherent to any type of preservation, as they state on their official website:

“All technologies come in cycles. While the Arweave’s mechanism design is generally engineered to promote adaptivity to new circumstances, the core Arweave team does not expect that the network as it is currently formulated will continue to produce blocks in true perpetuity. This does not, however, mean that we expect that the information stored inside the weave will be lost after the final block is mined. It is our expectation that when eventually a permanent information storage system more suited to the challenges of the time emerges, the Arweave’s data will be ‘subsumed’ into this network.”

See the essential features of the Arweave project in its crypto ID: 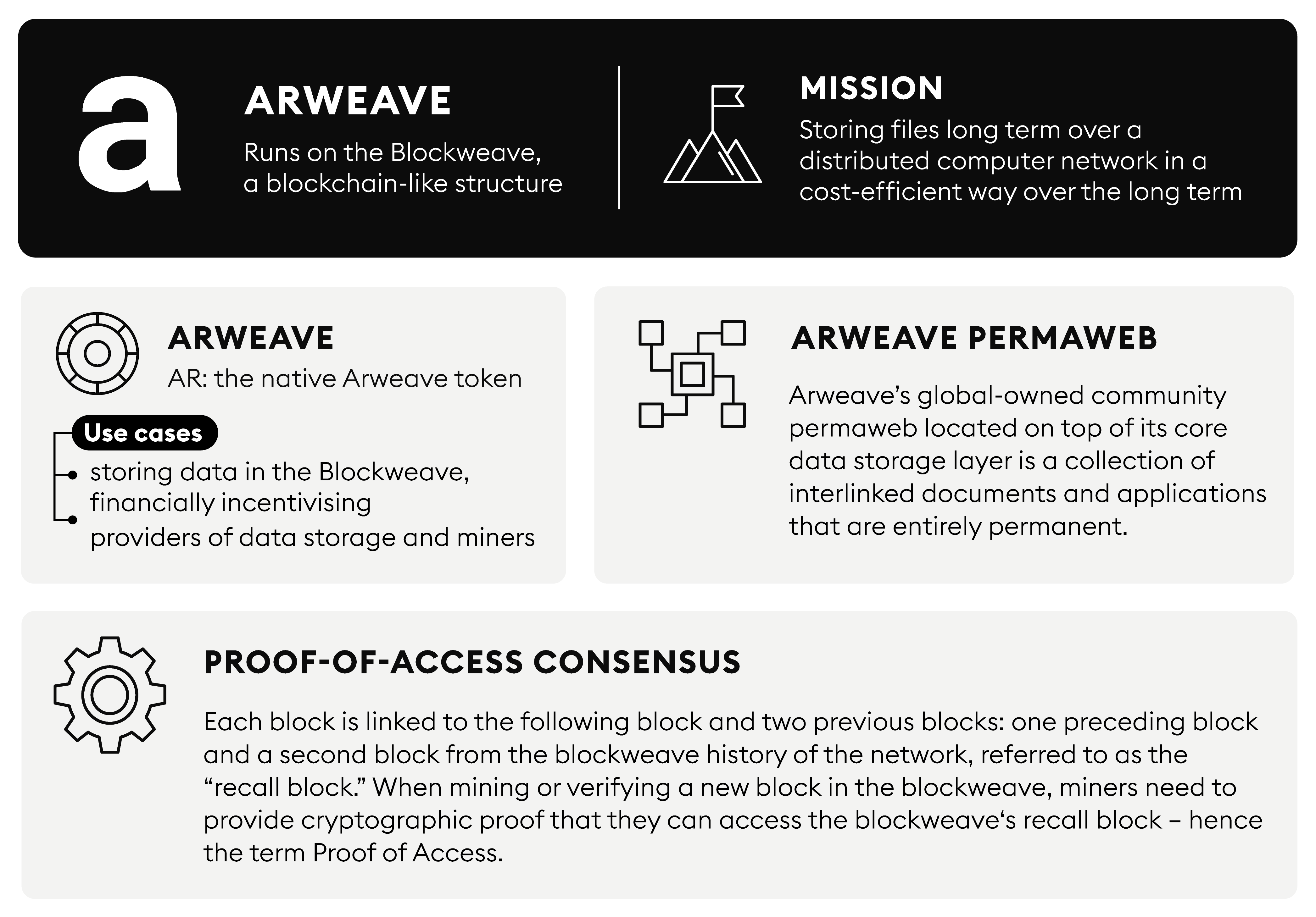 Building the web for perpetuity

The internet in its traditional form, among other things, had the purpose to create a gigantic collection of almost everything known to mankind. This data and information set out to be accessible to everyone who wants and needs access. Evidently, the concept proved highly successful, however, there is one inherent problem in the present structure of the web: once someone removes content from a server within the network, the information is no longer hosted online and therefore no longer available to users.

Arweave intends to tackle this predicament by providing an environment for users and developers where they can utilise a resilient knowledge base. It is perpetually replicated in vast numbers all over the network, with the objective of storing data indefinitely.

Thanks to this community's work, >6.5 million artifacts from Ukraine have been permanently stored so far.

This horrific moment in history will not be forgotten.

Reinventing the way we store information

Unlike the blockchain of Bitcoin, where blocks are connected to form a chain, Arweave is a community-owned storage platform that is set up around Blockweave, a web-like structure. Numerous applications that support users in building the network have already been developed by the Arweave community as well as libraries for integrating the protocol with programming languages such as PHP, JS and Python.

You can see Arweave as a gigantic web spinning itself. Its permaweb runs atop the “Blockweave” storing its data in a graph of blocks. Validity of a new block in the Blockweave is confirmed via a Proof of Accessibility consensus, proving that one of the interconnected blocks in the structure, called the “recall block”, can be accessed.

Just like in the traditional internet, the permaweb is a collection of interlinked applications and documents, but all content stored is entirely permanent. Also, just like the protocol of the traditional web, the Arweave network itself is based on the hypertext transfer protocol (HTTP). Therefore all the data stored on the network - videos, web applications, PDFs and more - can be accessed with regular browsers from anywhere.

Once uploaded, data can never be altered, thus increasing integrity and ensuring verifiability. Newly added content is carefully monitored via democratic moderation built into the core of the Arweave protocol. This serves to prevent potential abuse of the permaweb and to put control of the new web back into the hands of the community.

The Arweave (AR) token is the network’s native currency, supporting all Arweave applications. The total supply of AR tokens is capped at 66 million tokens and they are used to incentivise miners, to pay distributed data storage providers and for payment by users who want to store data. Payments are collected in a pool and distributed gradually, hence the fee pool gains value over time, similar to interest accrued on a bank account.

Recently, Arweave announced that the community behind the project has archived over 5 million documents from Ukraine to ensure the generation of a permanent record of historic events in the country that cannot be altered.  This ensures records such as press releases, tweets, photos and videos documenting geopolitical developments will not get lost and are also resistant to censorship.

As always, before you decide to invest in an asset, there are a number of things you need to consider:

Where can you start investing in AR?

On Bitpanda, you can invest in AR and more than 1,000 other assets, including cryptocurrencies, crypto indices, precious metals and more from just €1, 24/7 and even automate your investments with Bitpanda Savings.

You want to open a Bitpanda account? Registering is fast, simple and secure via Bitpanda’s desktop app or our apps for iOS and Android. Go ahead and verify your account, make your first deposit using your favourite payment method - including SEPA Instant - and start investing right away.