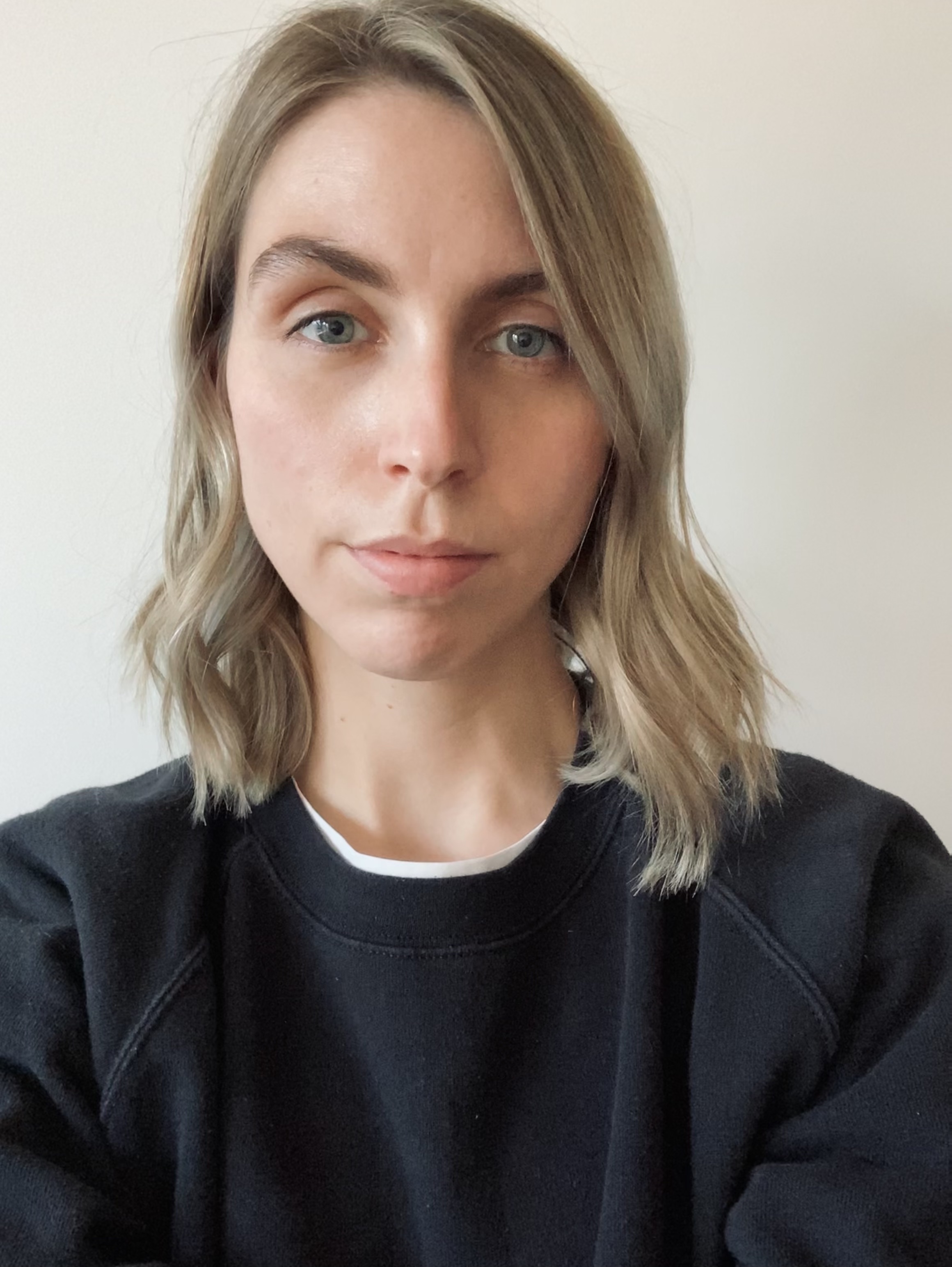 Today we have two crypto projects battling for the title of best Ethereum competitor: In the red corner we have Avalanche (AVAX), the fastest transaction processor in cryptoland, and in the other, pinker corner we have Polkadot, the master of interoperability. What do these two have in common? Where do they differ? And which is the better crypto? Let’s find out.

Ethereum may be one of the most popular crypto projects in the world, but it’s certainly not perfect. Two common criticisms are that it’s slow and not optimised for scale – though it must be mentioned that Ethereum is trying to tackle both of those issues in their current upgrade to Ethereum 2.0.

Still, these flaws leave room for other platforms to compete in the space that Ethereum usually dominates. Two powerful challengers have already emerged from the Altcoin pack: Avalanche and Polkadot. Both were created to solve the slow transaction speed and scalability issues plaguing the Ethereum network. Their solution? Spreading the workload across multiple blockchains, improving speed and overall functionality. Both projects also claim to be safer than Ethereum thanks to their shared security systems. But which one is the best solution? Let’s get into it.

Similar to Ethereum, Avalanche has a native cryptocurrency, the AVAX token, as well as a decentralised, open-source smart contract platform that can run decentralised applications (DApps). Developers can use Avalanche to build their own virtual machines and launch their own private and public blockchains called subnets.

AVAX is the native currency of Avalanche. AVAX is hard-capped, meaning there will only ever be 720 million AVAX tokens in circulation. It’s used for paying transaction fees, as part of the platform’s proof-of-stake validation process, and also provides a basic unit of account between the multiple subnets created on Avalanche. 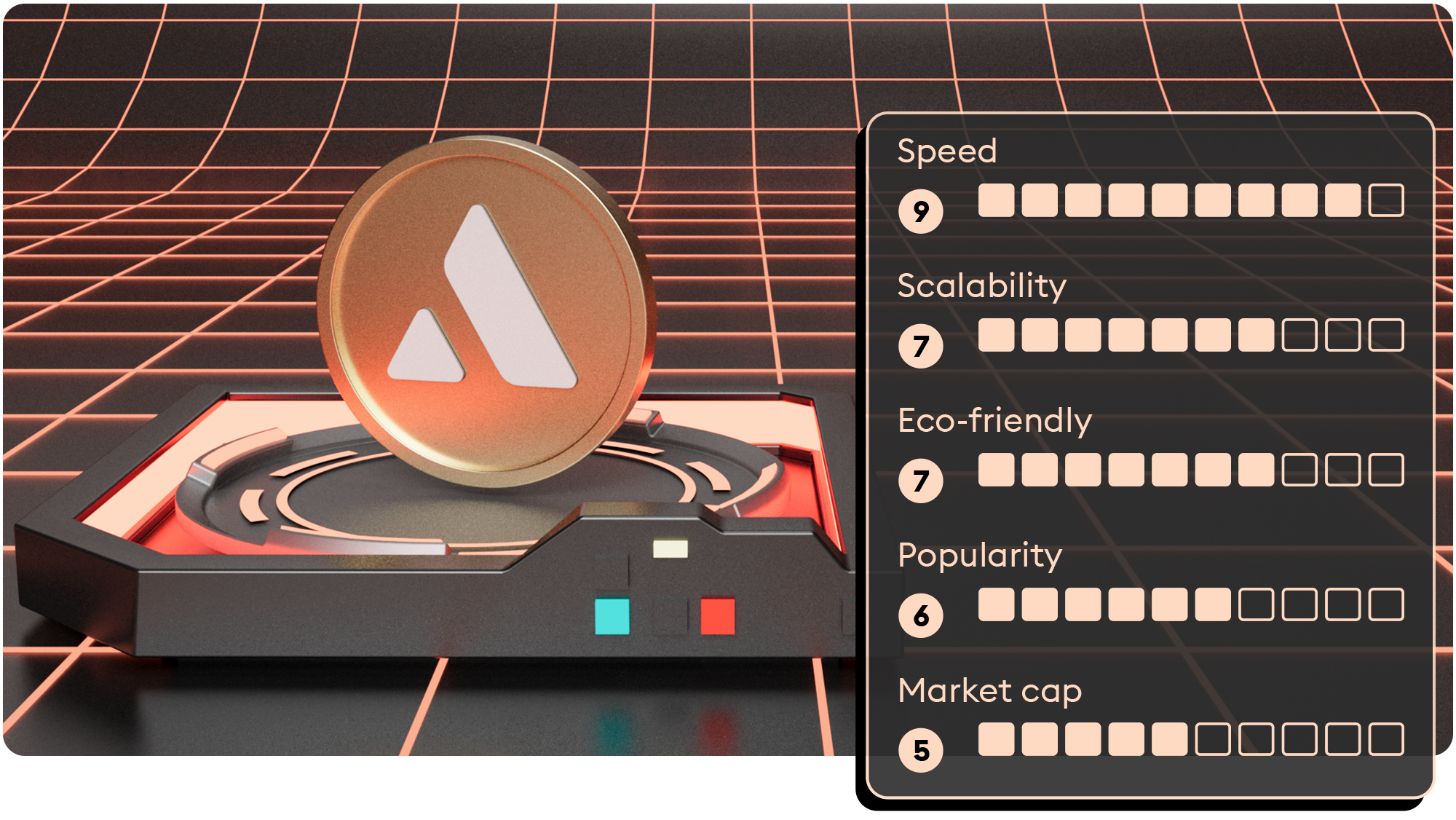 Speed, low costs, and eco-friendliness - these are the apparent advantages for developers who build their DeFi apps on Avalanche. Avalanche claims that it can process transactions “blazingly fast” - 4,500+ per second - and that it confirms transactions instantaneously. For comparison, Ethereum currently processes about 15 transactions per second. Thanks to its energy efficiency and proof-of-stake validation process, Avalanche is also more eco-friendly than proof-of-work-based cryptos like Ethereum and Bitcoin.

What’s Avalanche used for? Many different things by many different types of people. DeFi developers can create decentralised exchanges (DEXs) or Automated Market Makers (AMMs). Governments, businesses and institutions use it for asset issuance & trading, digital identity verification and document tracking. NFT fans and creators can launch their digital art and collectables. The possibilities are nearly endless.

In early 2021, the Avalanche price hovered between €2.00 and €4.00 until growing exponentially. After dropping in the middle of the year, AVAX continued its growth well into 2022, reaching its all-time high of €142.69. The value then decreased rapidly in the summer of 2022, currently experiencing an average daily high of €25.68 and an average daily low of €22.98. At the moment there are 283.9M AVAX in circulation, 39% of its total supply. Also, just a little reminder that the crypto market is known for its volatility, so past performance shouldn’t be considered indicative of future performances.

Created by one of the co-founders of Ethereum, Polkadot is an open-source, decentralised protocol that connects many specialised blockchains called parachains into one, interoperable ecosystem. Apps and services that are developed on the Polkadot network can communicate with each other across the various chains. For example, Polkadot can enable secure data transfers between the Bitcoin and Ethereum blockchains.

The native token DOT is used by holders to vote on issues concerning the Polkadot network in a process called governance. DOT is also used for staking to verify transactions and in bonding to make sure that new parachains are useful and safe. 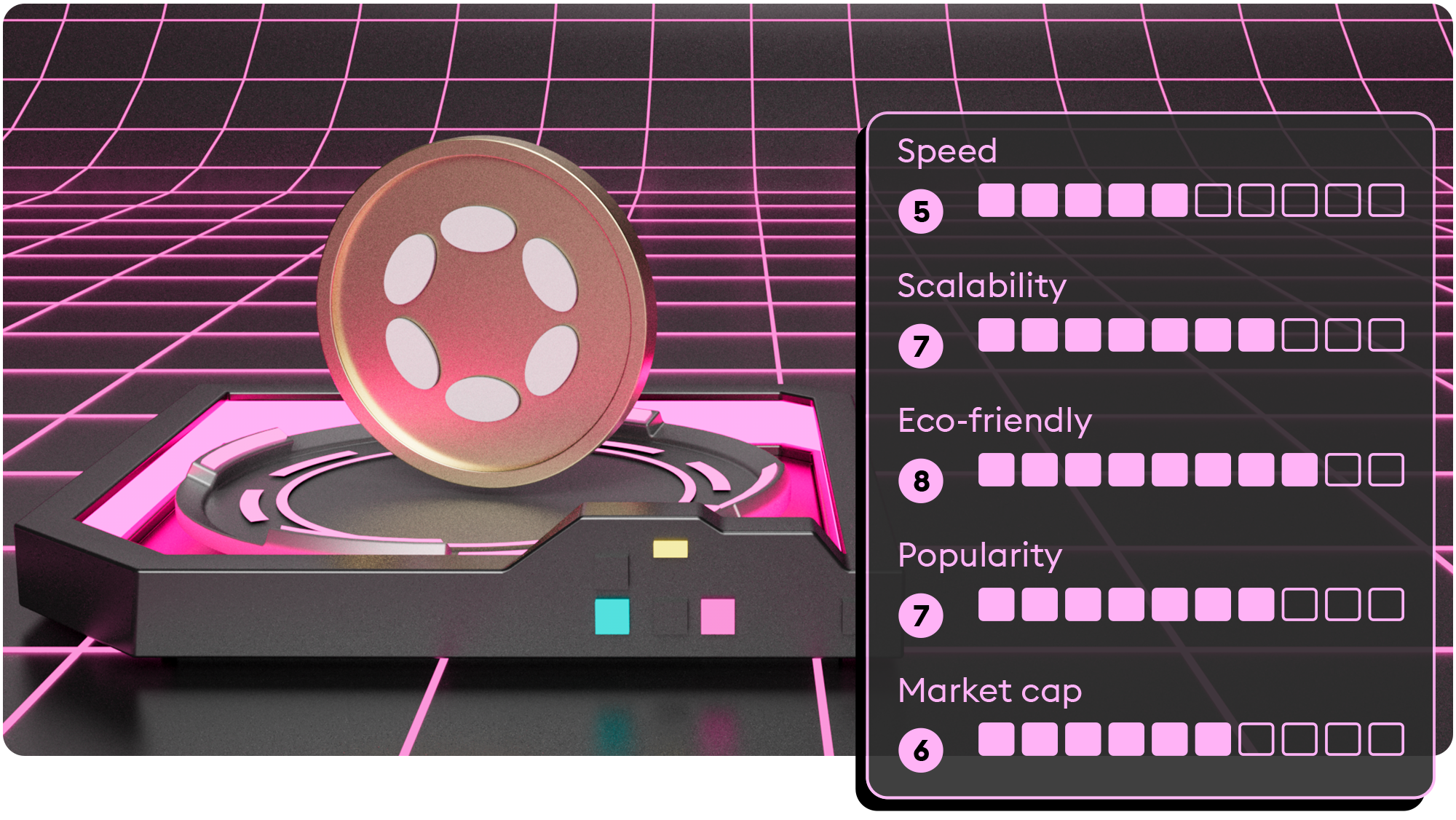 Polkadot promises to be a kind of middleman between various blockchains, enabling smooth cross-chain transfers regardless of asset or data type (not just tokens!). By spreading the transfer workload across multiple chains, Polkadot is on the same mission as Avalanche to significantly improve the scalability and increase speed for the developers who are building and connecting their apps and services to the Polkadot network.

Polkadot was conceived by an all-around blockchain dream team. One of the founders of Polkadot is Gavin Wood, who is also one of the founders of Ethereum and its former CTO. Wood is considered to be the inventor of basic blockchain components, including proof-of-authority consensus. One of Polkadot’s other founders is the Technology Director of the Swiss Web3 Foundation, which provides grants to continue the development of apps and services on the platform.

Just like other cryptocurrencies, DOT’s performance relies heavily on market demand. For most of 2020, the Polkadot price hovered steadily around the €4.00 mark, before jumping rapidly in the early months of 2021 and reaching its first all-time high of €47.12. The value came crashing down again in the latter half of 2021, then saw another significant climb upwards, rounding out 2021 at its current all-time high of €52.52. Starting in January 2022, DOT began another decline, with the current average daily high at €7.86 and the average daily low at €7.06.

The environmental impact of Avalanche and Polkadot

It’s important to understand that the process of validating crypto transactions and creating new crypto expends a lot of energy and creates electronic waste in the process, especially those that rely on a proof-of-work (PoW) system, like Bitcoin. Both Avalanche and Polkadot, however, use a proof-of-stake (PoS) consensus mechanism, which consumes significantly less energy than PoW.

According to the Crypto Carbon Ratings Institute (CCRI), thanks to proof-of-stake, Avalanche consumes only 0.0005% of the amount of energy that Bitcoin expends and just 0.0028% of that of the Ethereum network. Avalanche’s total yearly energy consumption is 489,311 kWh, compared to 89,780,000,000 kWh for Bitcoin and 17,300,000,000 kWh for Ethereum. Polkadot’s proof-of-stake system keeps it equally low in energy consumption, at around 70,237 kWh.

AVAX vs. DOT: Which crypto is right for you? 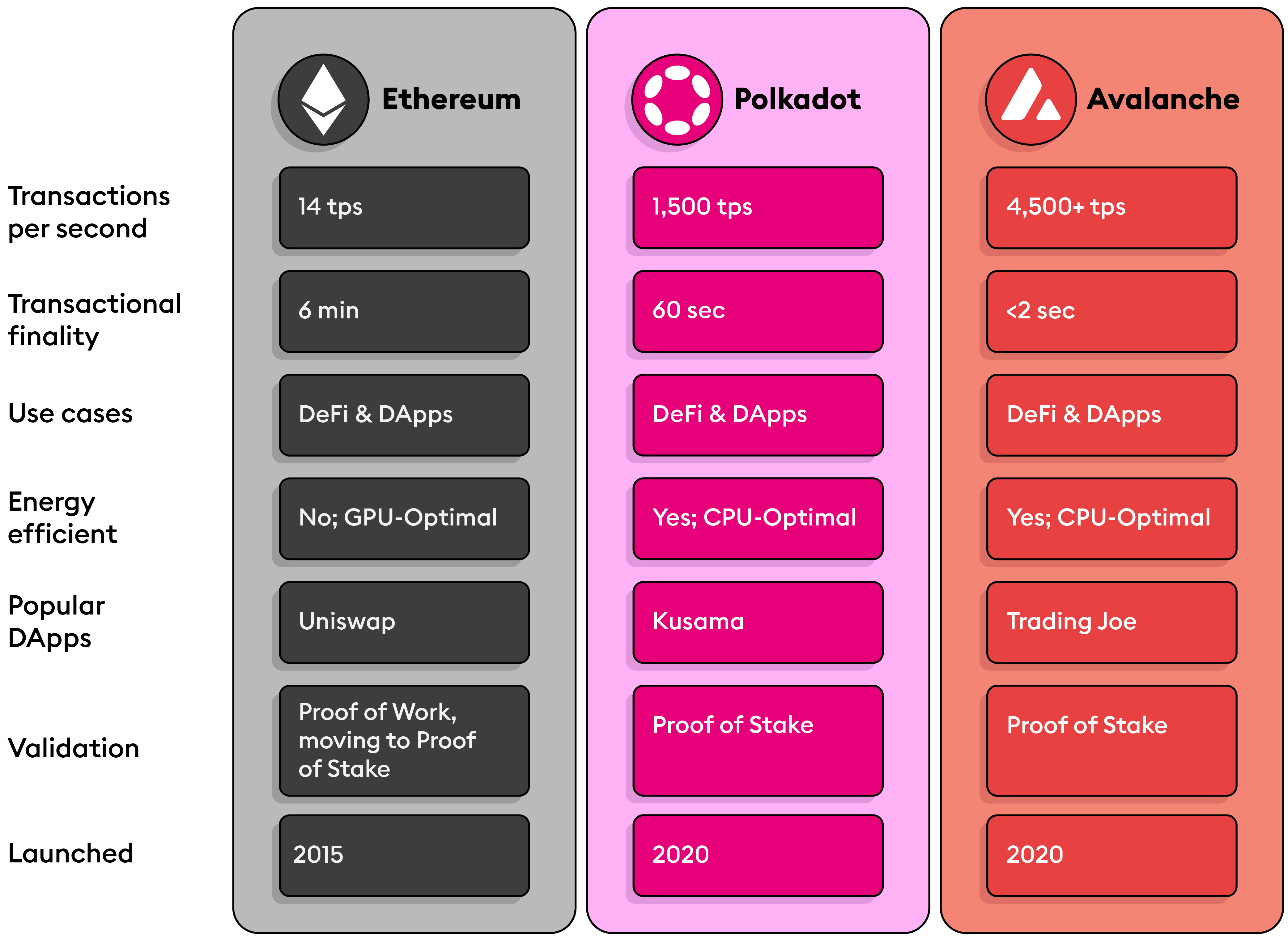 Avalanche? Polkadot? Or something entirely different? Which cryptocurrency is right for your portfolio depends on your interests, values and investment goals. AVAX and DOT are just two of countless cryptocurrencies available. We encourage you to do your own research and to reflect on what you want out of your investments before conducting any transactions, especially in turbulent times.

Once you’re ready to invest

Investing carries risks. Make sure to conduct your own research before making any investment. Past performance is no indication of future results.