It’s the battle of the biggies: Bitcoin and Ethereum are the world’s two most popular cryptocurrencies, inspiring die-hard fans and plenty of memes. But there are several differences that set them apart, leading investors to ask which one is right for their crypto portfolio. To answer that question, we’re taking a closer look at the histories, past performance and unique features of both BTC and ETH.

Even if you’re completely new to crypto, there’s a high chance that you’ve already heard of Bitcoin or Ethereum. They are the world’s two most popular cryptocurrencies by brand awareness and trading volume, and the currencies that most newbie investors turn to when they’re first dipping their toes into the cryptoverse.

Both Bitcoin and Ether, (Ethereum’s native currency) are decentralised, digital currencies that are bought and sold online through crypto exchanges and stored in cryptocurrency wallets. Though they both rely on blockchain technology, their algorithms are slightly different and, as of 2022, so are their accounting systems.

To get a better understanding of what makes BTC and ETH so popular, let’s take a closer look at both of these projects.

Bitcoin (BTC) is one of the original cryptocurrencies, and currently, it’s the most popular digital currency in the world. A compound of the word bit (in computing, the most basic unit of information) and coin, it was developed to create a decentralised payment system. This means that the Bitcoin currency is not owned or controlled by a central authority, like a bank or a government. Instead, Bitcoin is stored and exchanged securely online through an encrypted digital ledger known as a blockchain. All Bitcoin transactions are verified and recorded on the blockchain network.

Bitcoin transactions are processed peer-to-peer, without the need of a third party like a bank to validate the transaction. Like many other cryptocurrencies, Bitcoin relies on the “proof of work” (PoW) principle to create new Bitcoin and  process transactions. Basically, with PoW, computers must prove that they have expended computational power to reach a common agreement across the decentralised peer network that the transaction is valid. Though it’s resource-intensive, proof of work makes it extremely difficult to make any changes to the blockchain.

Bitcoins can be divided into smaller currency units called Satoshi. The supply of Bitcoin is limited to 21 million BTC. As of January 2022, the current circulation supply is 18.9 million BTC.

How many commas of satoshis does it take to be a #Bitcoin dragon? 🐲 @KJovian @DemonykCrypto @brandon2410

The origin of Bitcoin

Back in 2008, a person or a group going by the name of Satoshi Nakamoto - their real identity is still unknown - conceived the idea of a decentralised digital currency and published a white paper titled "Bitcoin: A Peer-to-Peer Electronic Cash System." On January 3, 2009, Nakamoto started mining (the process of issuing new coins) the first block of the Bitcoin blockchain, which is now known as the genesis block. A few days later, on January 9, 2009, the first Bitcoins went into circulation, with the first Bitcoin transaction completed on January 12.

Unlike fiat currencies, such as the Euro or the US-Dollar, the value of Bitcoin is not defined by a single entity. The value of BTC depends heavily on the supply and the demand of the market, as well as the current demand for competing cryptocurrencies. Industry news can and has impacted past performance, as have times of economic downturn and major global events, such as the Covid-19 pandemic and the war in Ukraine.

This might be the million dollar - or million Bitcoin - question, especially for crypto newbies. What is it about Bitcoin that inspires legions of loyal fans, countless news stories, and high-profile celebrity endorsements, not to mention an entire catalogue of memes?

Being the first and therefore oldest cryptocurrency certainly helps. Unlike newer cryptos, Bitcoin has had time to “prove itself”, thereby attaining widespread acceptance. Early adopters enjoy having been there right at the start, which explains their loyalty to the coin. And as mentioned, having celebrities like Elon Musk invest in and talk publicly about the coin lends it even more credibility. All of these factors contribute to Bitcoin’s evolution from more than just a digital currency, to becoming a kind of lifestyle.

Before jumping into Ethereum, let’s first take a look at the difference between coins and tokens, because, as we will see, it’s an important one.

Cryptocurrencies like Bitcoin, Ethereum and Ripple are coins because they are built on their own blockchain. A majority of the most popular cryptocurrencies are, in fact, coins.

In contrast, a token is a cryptocurrency that doesn’t have its own blockchain but instead is built on top of an existing blockchain. Examples here are decentralised applications (DApps) that are built on the Ethereum network. These DApps can have their own token - referred to as ERC20 tokens (Ethereum-based tokens) - and include tokens like Aave and Chainlink.

Ethereum is the world’s second most popular cryptocurrency after Bitcoin in terms of market capitalization. The native currency of Ethereum is called Ether. Like Bitcoin, Ether is an open-source currency that is not controlled by any central authority. Ether can be bought and sold securely online via crypto exchanges and can be stored in a cryptocurrency wallet.

What sets Ethereum apart from Bitcoin is that it also functions as a decentralised and secure computing platform that can run a number of decentralised applications, services, games and databases. This is enabled through smart contracts, which are a type of computer protocol that exists to offer a secure and trustworthy way for contracting between strangers on the Internet. Smart contracts support Ethereum’s aim of moving beyond peer-to-peer payments into a full-blown network for developers and businesses to create programs. Whereas Bitcoin’s primary focus is on being a digital currency, Ethereum’s is a platform for developing applications.

Our Q2 roadmap is (finally) out! Check it out & get involved 🚀https://t.co/dvaN6bXJut

The history and future of Ethereum

Ethereum was conceived by Vitalik Buterin, a programmer and co-founder of Bitcoin Magazine, and launched by Buterin and a few others in 2015. Buterin’s vision was to create a new platform for decentralised applications after he suggested the implementation of a scripting language in Bitcoin. He outlined the foundational concepts of Ethereum in a whitepaper titled “A Next-Generation Smart Contract and Decentralised Application Platform.”

As with Bitcoin and any other cryptocurrency, the Ethereum price depends on supply and demand and therefore tends to fluctuate in response to events happening in the market. In 2015, the price for one Ether averaged around €0,88, increasing steadily until reaching its first all-time high of €1.039,27 in January 2018. After decreasing and hovering between €146 and €195 for a year and a half, Ethereum skyrocketed in 2020, climbing rapidly to reach its all-time high of €4.310,99 in November 2021. Currently, Ethereum is experiencing a daily high of around €1.125,01 and a daily low of around €1.011,62. 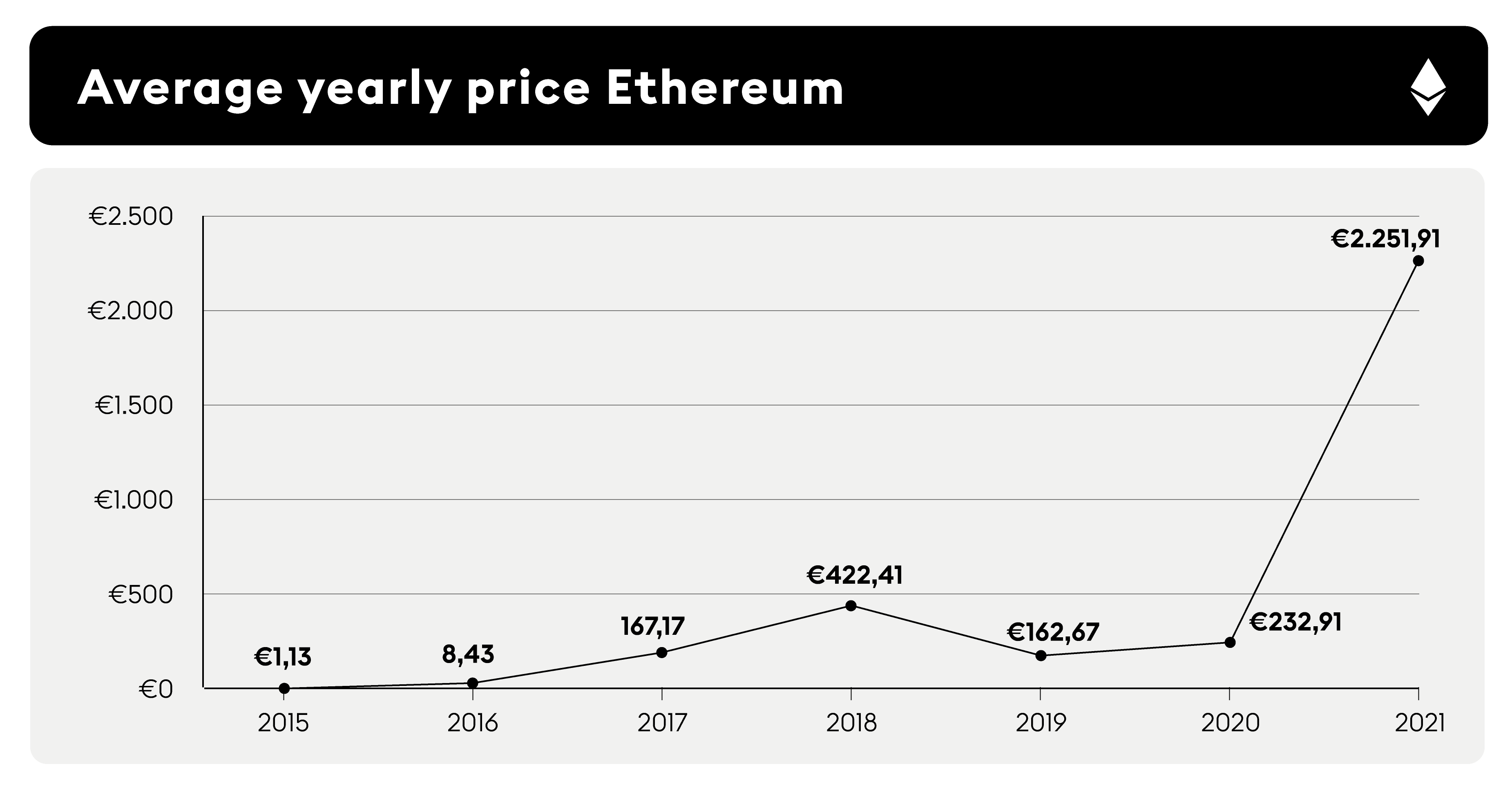 Since Ethereum is the second largest cryptocurrency after Bitcoin, these two cryptos are often pitted against each other as rivals. Yet what differentiates Ethereum from Bitcoin is that it offers more than one use case.

Though both BTC and ETH are digital currencies, ETH doesn’t strive to be an alternative to traditional currencies and instead exists to monetize the Ethereum platform and to keep it running. Some of Ethereum’s other use cases include hosting a decentralised swap for Ethereum-based tokens, providing a decentralised identity ecosystem, and simplifying real estate transactions. There are about 1,000 applications already running on Ethereum.

The environmental impact of Bitcoin and Ethereum

The simple truth is that the process of creating Bitcoin requires a huge amount of energy - an amount that exceeds the energy consumption of many countries, including Belgium and Finland. This is because the computers needed to solve the mathematical problems for mining expend a lot of computational power. 36 kilotons of electronic waste are produced annually as a result of mining for Bitcoin. Bitcoin transactions are also energy-intensive: It is estimated that validating each Bitcoin proof-of-work transaction uses the same amount of energy that the average American household does over 50 days - around 1455.8 kilowatt-hours of electricity.

Though Ethereum is in the process of switching to proof-of-stake for its validation system, which consumes significantly less energy than proof-of-work, at the moment it still consumes as much electricity for mining as the entire country of Switzerland. Each Ethereum transaction uses as much energy as an average American household does in 5.51 days or 163 kilowatt-hours of electricity. 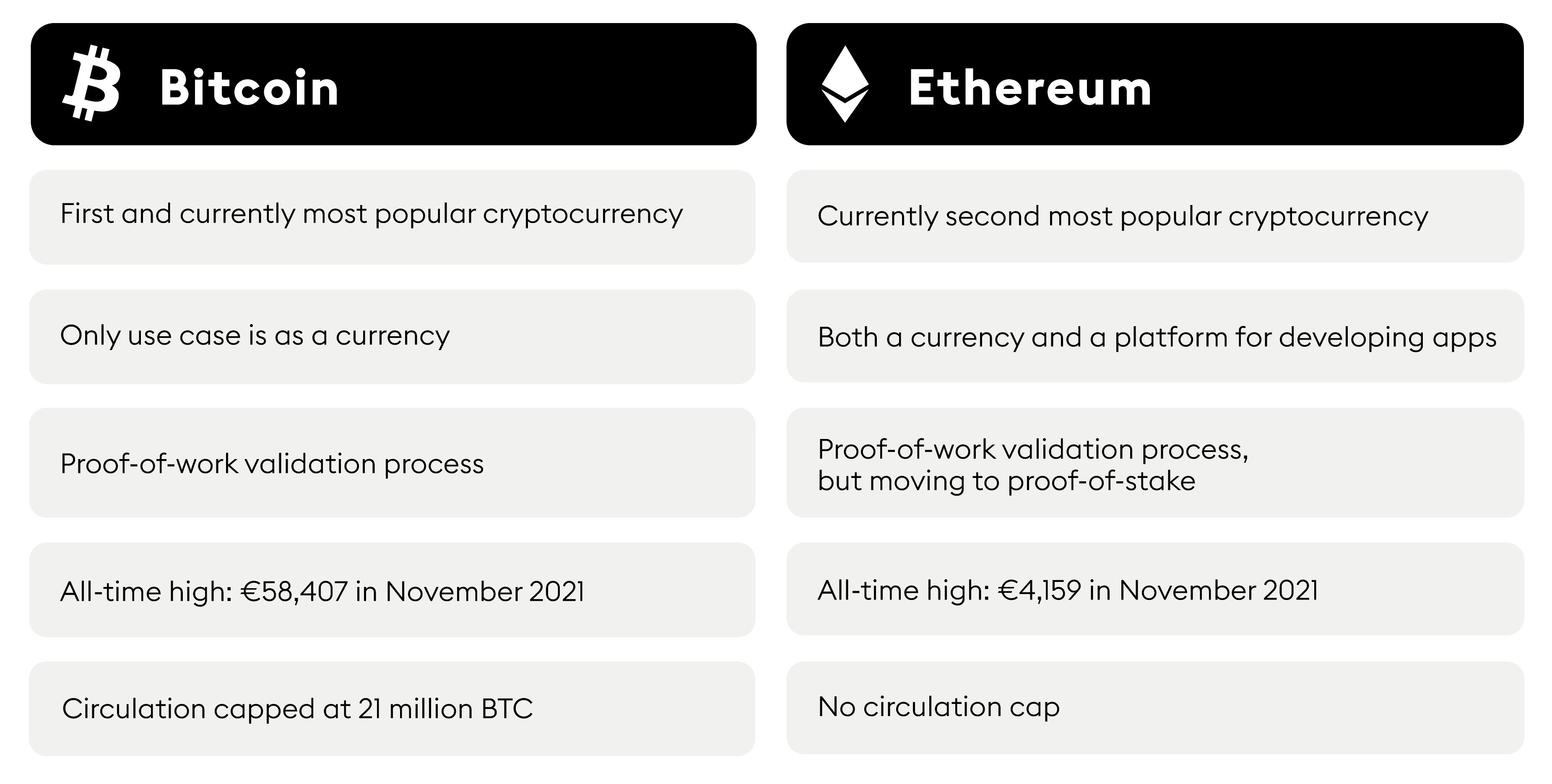 Bitcoin or Ethereum? Here are the highlights of each crypto at a glance.

Bitcoin vs. Ethereum: Which crypto is right for you?

That depends on you! Bitcoin and Ethereum are just two of countless cryptocurrencies available. We encourage you to do your own research and to reflect on your personal investing goals before conducting any transactions.

Average yearly values of Bitcoin and Ethereum were calculated with data sourced from coinmarketcap.com.

Investing carries risks. Make sure to conduct your own research before making any investment. Past performance is no indication of future results.

5 considerations to make the most out of earnings season

As the second quarter of the year has just passed and markets remain...

DigitalBits (XDB) has recently been listed on Bitpanda. A blockchain...