Bitcoin’s Taproot upgrade - what you need to know

While both Bitcoin and Ethereum are based on cryptography and distributed ledger technology, until now, Bitcoin’s utility has been limited to serving as a store of value and an alternative to fiat currencies. Could Taproot change this?

From its inception, one of the main limitations of Bitcoin has been its lack of smart contract flexibility which is the reason why Ethereum, as well as other similar projects, are the blockchains of choice for running smart contracts. Currently, hundreds of projects such as NFTs, DApps and ventures in the DeFi space run on Ethereum, Cardano and others. Why is this?

In the Bitcoin whitepaper, Satoshi Nakamoto states they are creating a network that “is robust in its unstructured simplicity”, hence Bitcoin was developed as Turing-incomplete blockchain. This means that it cannot perform all the computations that any other computer may be able to perform. A machine that is considered “Turing-complete”, on the other hand, is universally programmable. This is the case with Ethereum.

However, the next Bitcoin upgrade by the name of Taproot, which is the most significant one since 2017, is scheduled to take place via a soft fork in November 2021 and is bound to bring significant traction to the original design. Taproot has already been approved by miners all over the world following a general consensus regarding BIP 343 (Bitcoin Improvement Proposal) as it sets out to expand the utility of the Bitcoin network and to lay the groundwork for future functions such as smart contracts.

Beyond the throes of SegWit

Bitcoin’s last major update, SegWit, took place in 2017. Some will still remember the huge rift this upgrade caused in the Bitcoin community. Basically, SegWit decreases the weight of transactions in blocks on the blockchain by segregating each transaction to two sections. The update also resulted in the creation of Bitcoin Cash, which was supported by opponents of SegWit in the scope of a hard fork and implemented an increased block size.

In contrast, it was smooth sailing for the Taproot BIP, with consensus on the Bitcoin Taproot upgrade scheduled for November 2021 having already been reached on the 12th of June this year. Taproot will be the most significant Bitcoin update since 2017 and plans are underway to add a number of functions to Bitcoin.

What does “Taproot” mean? In the world of plants, a taproot is a type of long root that develops from the source of the root into the main root and that grows straight down into the soil. A carrot or a dandelion are examples of plants with taproots. Side roots emerge from the taproot itself.

First proposed by Bitcoin developers Gregory Maxwell, Andrew Poelstra and Pieter Wuille in 2018, let us try to explain it simply: Bitcoin has a scripting system with the ability to specify all types of conditions where coins can be spent.

For example, said conditions are that a public key represents an address and anyone who signs a transaction with the matching private key can spend the coins, alongside many other possible conditions. Currently, all conditions are stored, revealed and validated on the blockchain, although ultimately, there are only a few that matter: the amount, the sender and recipient and when the coins are spent.

By introducing Taproot, all these different conditions are packaged into a hash tree (Merkle tree) based on the MAST (“Merklized Abstract Syntax Tree”) principle - this way, only one condition needs to be revealed. The hash tree bundles many hashes in the “root”, thus decreasing the size of the transaction - “a thick central path and small alternatives,” according to Maxwell.

Taproot also sets out to change multiple key functions for transactions that are signed by several senders. When Bitcoin was created as a permissionless and open system, the ECDSA (Elliptic Curve Digital Signature Algorithm) was elected as its security signature scheme because of its properties, such as being lightweight, open-source and secure.

Now, the Taproot upgrade is set to replace ECDSA with Schnorr signatures, which have the advantage of being security-proof and non-malleable.

Schnorr signatures also enable key aggregation for multiple parties that want to produce one signature together while the multisig transaction still looks exactly like a normal transaction. 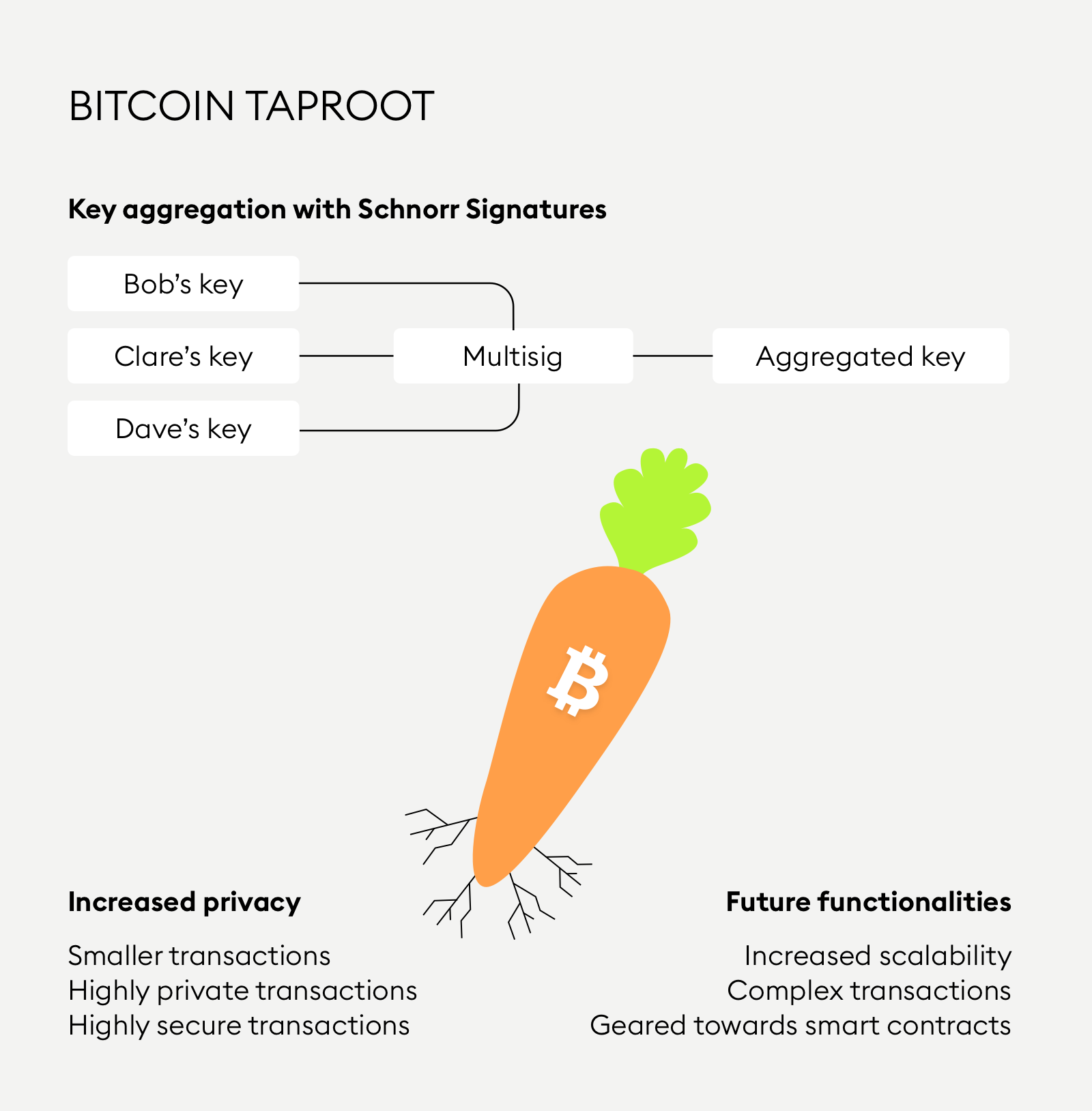 What happens when you use Schnorr signatures? Even very large multisig transactions - in which, for instance, 36 out of 71 participants are required to sign - become just as small as ordinary transactions as a “master signature” is included in a transaction transmitted over the network, improving transaction privacy and reducing storage and bandwidth, thus providing ample room for more transactions on a blockchain at a lower cost.

Paving the way for smart contracts

While running smart contracts on the core protocol layer of Bitcoin would still be expensive and time-consuming, with a lot more work needed for them to actually function, Schnorr signatures are an essential prerequisite for scaling the Bitcoin network and providing leverage for addition to the Lightning Network.

Taproot will enable tying a key to a hash of data, such as timestamps, into a regular transaction with a high level of privacy while improving the technology behind Bitcoin in order to lay the groundwork for future smart contract functions. It will take time to get there but, in the meantime, private and flexible cooperative spending is on the way.