In general, Bitpanda will not blindly support any fork, the reason being the great uncertainty behind most newly created versions of Bitcoin.

In general, Bitpanda will not blindly support any fork. The reason being the great uncertainty behind most newly created versions of Bitcoin. Below we will take a quick look at the important past and upcoming forks of this year and our view towards them.

To understand Bitcoin forks, you must first be fully enlightened about Bitcoin itself. Bitcoin is an open technology, based on a model of consensus between various parties, such as Bitcoin miners, developers, users and platforms. Each party has the right to propose a certain update to the Bitcoin network, but is not entitled to implement the proposal without the consent of all the other parties. Through this, the Bitcoin network improves through various great minds with diverse visions, proposals and ultimately updates.

Most of the time the model of consensus works just fine. However, as mentioned, Bitcoin is an open technology with various parties involved. This means, that there will be many diverse proposals on how Bitcoin should operate, which could cause a dispute between the parties. For example, whether an implementation of a certain proposal is necessary or not, or if the agreed upon problem is solved like this or like that.

Should it not be possible to find an agreement, developers could simply fork from the current Bitcoin software and create a new version according to their visions, ideas and rules. As a Bitcoin owner, you must not worry though, as seen with Bitcoin Cash in 2017, after a fork you receive just as many of the newly created coin in addition to your Bitcoins.

So, it theoretically is easy to create a new coin based on the Bitcoin system, but simply by creating a new coin the job isn’t quite done yet. For the new coin to make any headway at all, it needs the trust and acceptance of the community. Numerous of the proposed Bitcoin forks just create another Altcoin with low or no value at all and several security issues.

Only when the new coin has over stood a thorough due diligence process, where it has proven to be safe and trustworthy, it will be implemented by the well-known blockchain service providers, such as exchanges, marketplaces and merchant systems.

Hence, we will only act when it is in the best interest of our users, so that your digital funds can be kept safe and secure at all times.

As mentioned, Bitpanda will not initially support any new version of Bitcoin which has arisen from a fork. Primarily, we will carefully watch its market acceptance to guide and protect our customers through these essential moments accordingly.

However, should a new network become stable and safe in addition to a growing market, we will consequently take actions on our platform. Bitcoin Cash for example, receives a hybrid solution. We have enabled the option to either sell or withdraw BCH, but there is currently no plan for a full integration as an Altcoin on our platform.

In particular I would like to make a clear statement with a few sentences commenting on the two upcoming forks of Bitcoin Gold and Bitcoin2X: 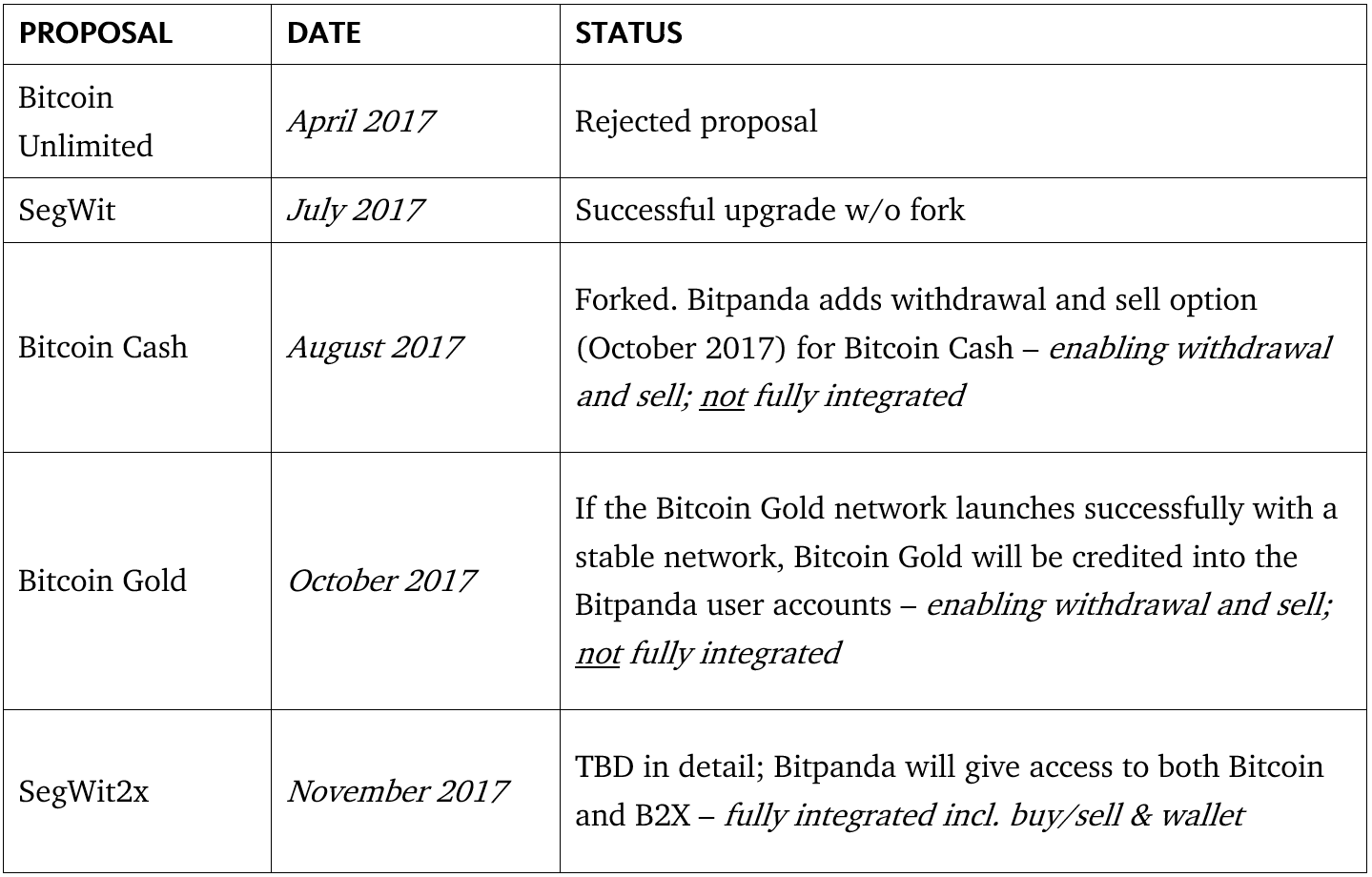 Many more forks are bound to come, and we assure you, that we will always try to help and bring some clarification regarding this complex topic. Please keep in mind, that the safety of our customer’s funds has always been and always will be our number one priority. We are constantly working on offering the best service on the cryptocurrency market and hope you stay tuned for further news and updates.