Enjin, the builder of blockchain-based gaming communities in the spotlight

250,000 gaming communities with almost 19 million registered gamers: the Enjin platform combines online games with decentralised technologies and has set out to offer users the ultimate NFT experience in the gaming industry with its native token Enjin Coin (ENJ). Is ENJ bound for long-term success? Read on to learn more.

Enjin in a nutshell

Enjin was actually founded as a regular gaming community platform in 2009 and broke into the blockchain space after their ICO in 2017. The project is set to offer game developers a broad range of services for building on the Enjin network to promote the decentralisation of gaming. It was Witek Radomski, one of the founders of Enjin who was behind the proposal and integration of a new ERC token standard, ERC-1155, for multitoken management and transactions, which you will read about further down. The project cuts to the chase:

And as always, let’s run through Enjin’s crypto ID for all the details: 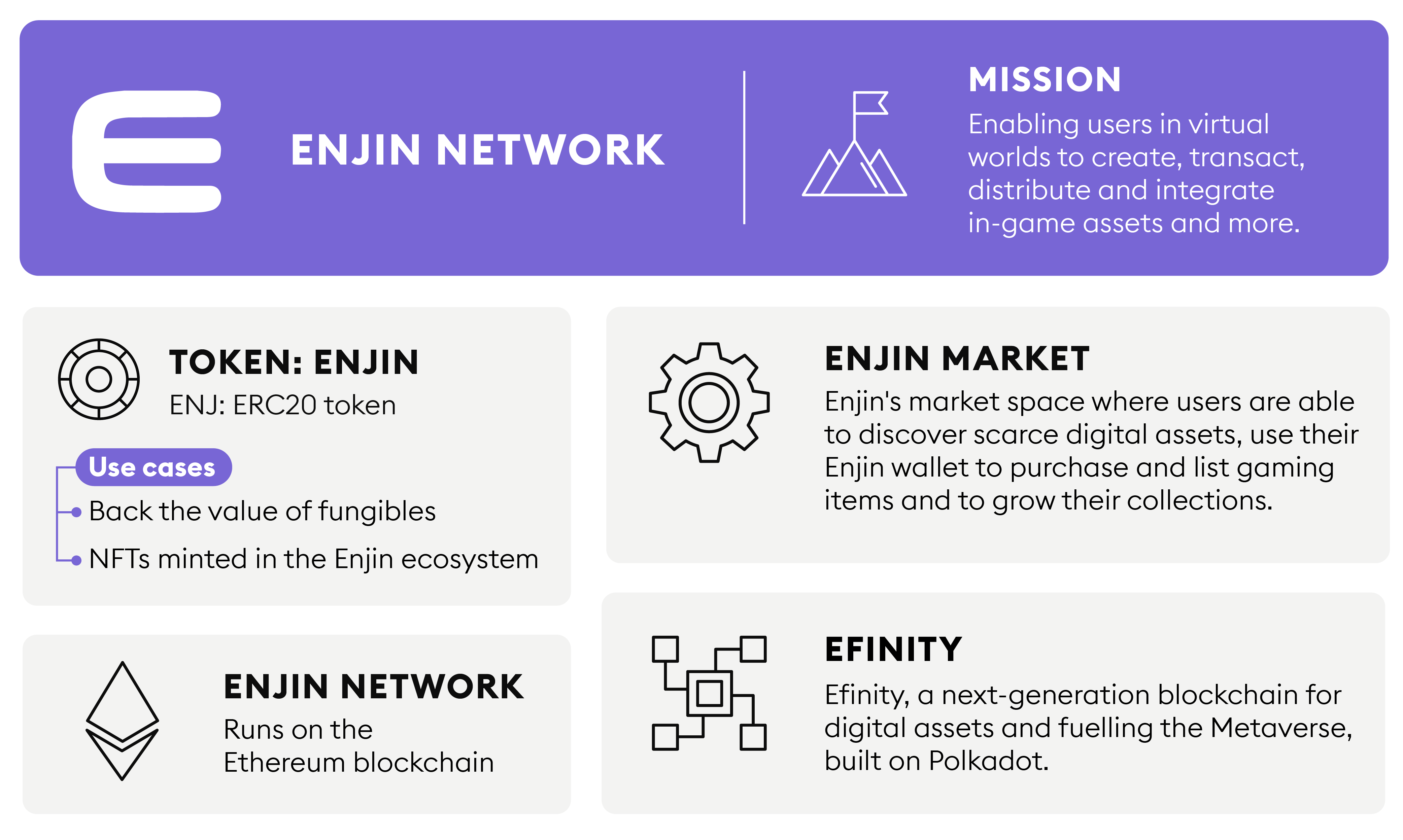 While Web 2.0 increased interactivity and utility in the internet, users footed the bill of centralisation while using the services offered under the heel of tech giants. Web 3.0 is transforming these structures and giving the web back to the users by bringing transparency, decentralisation and much improved access to content, user participation and monetisation.

The Metaverse of the Enjin platform is a force to be reckoned with in this evolving space, converging your experience with the real world and offering you a space where you can establish your identity and interact with other users.

Create your own personal avatar, play to earn with your favourite games and manage your personal assets from more than 10 million digital unique and rare blockchain assets you can buy and sell on Enjin marketplace in a virtual economy that is rapidly growing.

With 7.7M $DOT contributed by over 20,000 community members, @efinityio has won the 6th @Polkadot parachain auction! 🎉

Thank you to everyone who has supported us in our endeavor to bring #NFTs to Polkadot.

To Efinity and beyond! pic.twitter.com/n2ffJEr53C

Taking NFTs to the next level

A token has a specific function or value such as the digital representation of an asset. It can be fungible (exchangeable for another token of the same type or like fiat money bills) or non-fungible.

A "non-fungible" token (or “NFT” for short) is a unique digital asset that cannot be exchanged one-for-one for another. Assets such as digital works of art, music rights, sports collectibles and more can be tokenised to digitally represent ownership and to transfer rights and obligations associated with this ownership to an NFT (non-fungible token). How is it unique? Ownership of an NFT is verified and coded in through smart contracts via alphanumeric codes.

Imagine the following: a gamer buys a sword, an in-game item that belongs to them and that they can use in different games or also sell to someone. This sword has been created by another player as NFT and the player received ENJ for creating this sword.

Using their Enjin wallet, users can manage, list and store their NFT collectibles. Digital collecting is taking the world by storm and Enjin is at the hub of the trading hype. The platform can be used for creation, distribution, integration and trading of tokenised assets in a broad range of industries.

Building your own projects

The Enjin platform provides you with everything you need when it comes to creating your own products based on blockchain technology - including tools, structures, wallet and a marketplace - no matter if you are a gamer, developer or entrepreneur, no coding skills are required.

It’s easy: install your wallet, create an account on the platform, use the API to integrate your creations with your own project and check out what other projects have been up to.

Hundreds and thousands of in-game items are used, bought and sold on the marketplace within seconds. This is possible thanks to the ERC1155 token standard we mentioned in the beginning. ERC1155 allows gamers to send any number of their (non-fungible) items to many recipients in the scope of just one transaction instead of a separate smart contract and transaction for each item (as with the ERC 721 standard). Registration of fungible tokens is possible as well.

This ERC-1155 feature is of the essence as Enjin Coin (ENJ), the network’s payment currency, is fungible and runs on the ERC20 token standard. Each NFT contains ENJ as the minting resource locked inside. The amount is minted during the creation process and a reserve value is allocated to the item. At the same time, this removes the respective amount of ENJ from circulation, increasing the scarcity of ENJ. If a user wants to liquidate an item, they can “melt” the asset via their Enjin wallet and retrieve the ENJ backing.

Building the NFT highway with Efinity

Finally, the Enjin project has been working on developing the Efinity parachain, a blockchain exclusively for NFTs, running on Polkadot relay chain validators. This is to improve the user experience and to allow NFT transactions at reasonable fees. The Efinity token (EFI) is Efinity’s native token used for the payment of transaction fees, facilitating liquidity, in governance voting and for rewarding network participants.

Before investing in an asset, as always, here are some things to bear in mind.

Where can you start investing in ENJ?

On Bitpanda, you can invest in ENJ and more than 1,000 other assets, including cryptocurrencies, crypto indices, precious metals and more from just €1, 24/7 and even automatically with Bitpanda Savings.

Content Creation Expert at Bitpanda writing on blockchain and personal finance for everyone no matter their background, breaking down the barriers of investing.