Fantom, the smart contract and DeFi platform in the spotlight

With aspirations to become a fast, reliable and secure platform for smart contracts, Fantom recently hit the headlines by making its way up the rankings of the top DeFi ecosystems by total value locked. For many, Fantom constitutes a serious competitor to Ethereum, for others it could even be the next Solana. Read on to find out more about Fantom and its native token FTM in this week’s spotlight asset.

Fantom in a nutshell

Fantom is a fast, highly scalable blockchain platform for smart contracts, decentralised finance (DeFi) and decentralised applications (DApps). The Fantom Foundation was founded in 2018 by Dr. Ahn Byung Ik and the project mainnet was officially launched in December the following year. Fantom was designed to be a platform for smart contracts that could evenly prioritise security, decentralisation and scalability, without compromising any of these features.

Developers can build and implement their DApps in a highly user-friendly environment: Fantom Opera. Opera is a permissionless blockchain built by the Fantom Foundation. It is powered by the same consensus mechanisms as Fantom and allows developers to build their DApps, DeFi applications or to implement smart contracts exactly as they would do on Ethereum, as Opera is compatible with the Ethereum Virtual Machine (EVM).

Before deep-diving into some of the features of Fantom, let’s take a look at its Crypto ID and get a clear overview of Fantom and FTM. 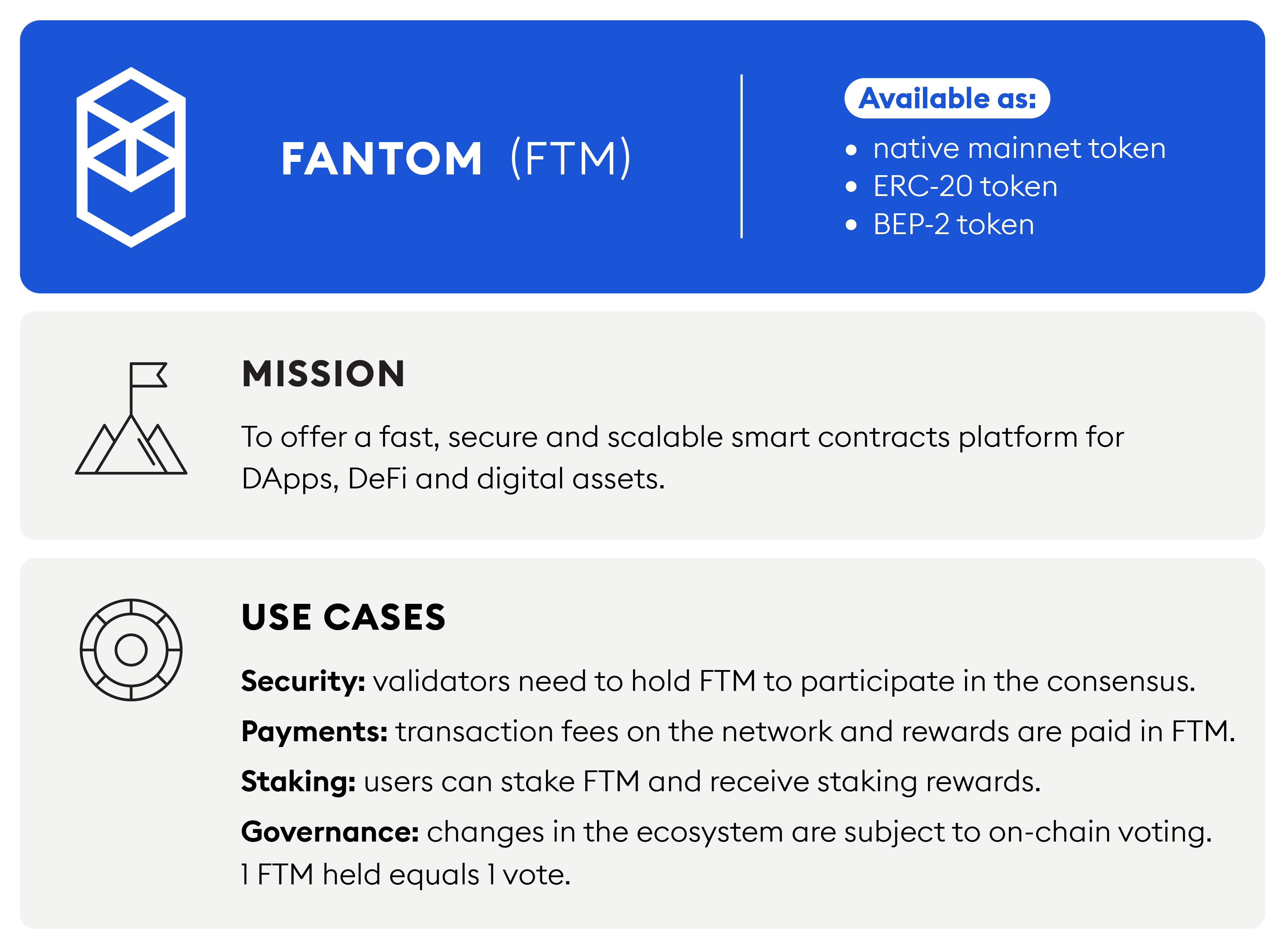 One of the most relevant and known features of Fantom is probably its consensus algorithm that is considered the real backbone of the network, which allows Fantom to reach the speed, reliability and security that it promotes.

“to overcome the limitations of previous consensus algorithms”.

Lachesis is also described as:

“the ideal option for applications that need high-throughput, fast finality, and bank-grade security”.

Lachesis is an asynchronous consensus mechanism, which means that the participants can take part in the consensus freely and at different times.

It is also leaderless: there are no individuals with special roles, as can be the case with other consensus mechanisms.

Another quality that Lachesis brings to the network is the near-instant finality: the time to finality required is significantly smaller than the one needed with Proof of Work or Proof of Stake. Thanks to Lachesis, transactions on Fantom are confirmed in a matter of seconds.

The asynchronous Byzantine fault tolerance allows the nodes in the network to reach consensus independently. This way, the transactions can be processed without following a specific order, increasing the speed and the throughput of the network.

The nodes store local acyclic directed graphs (DAG) made of event blocks, which also contain transactions. These event blocks are then divided into confirmed and unconfirmed blocks, where the new ones are initially the unconfirmed. The confirmed ones continue the process and get ordered by the honest nodes in the network. The finalised blocks composing the final chain of the consensus are each made by separated buckets of confirmed event blocks.

Thousands of transactions can be processed with Lachesis within seconds with very low transaction fees and without compromising the security of the network.

FTM is the native token of Fantom. It is also available as an ERC20 token and as BEP-2 token. FTM has four main use cases:

Where to start your research

Learn more about Fantom on the official website, fantom.foundation. There you will learn more about the status of the project and its mission. Take some time to think about how tolerant to risks you are, how your portfolio is looking in terms of diversification and what results you’d like to achieve when you invest. When you’re done, see how this altcoin will fit in your portfolio and investment strategy.

Where can you buy Fantom?

After careful consideration, are you thinking about buying FTM? We got you! On Bitpanda, you can buy FTM in a matter of minutes. Create and verify your free Bitpanda account, deposit your funds with your preferred payment method - SEPA Instant included - and you’ll be ready to start investing in cryptocurrencies but also crypto indices, precious metals and many other digital assets.