Claiming to be a fast, carbon-negative alternative to blockchain, Hedera is an open-source public distributed ledger looking to shape the digital future using a hashgraph consensus algorithm.

Launched in 2018, Hedera is unlike most projects in the crypto industry as it doesn't run on a blockchain. Instead, Hedera employs an alternative technology, which is a new type of patented distributed ledger called the “hashgraph distributed consensus algorithm”. Hedera’s mainnet was launched in September 2019 and it was an immediate success, reaching around 2.2 million transactions in a week. It took around 18 months after its launch for the Hedera mainnet to reach one billion transactions - an impressive feat for a relatively new project.

The open-source public hashgraph network provides a safe and secure space to build and implement decentralised applications for its users while positioning Hedera as the leading distributed ledger platform. The network supports the potential for an exceptionally wide range of applications from music-streaming services and pharmaceutical supply chain management to energy microgrids and multiplayer online games.

Hedera has also adopted environmental sustainability as a core value, with the network’s energy-efficient hashgraph algorithm and Proof of Stake consensus mechanism laying the foundations for a sustainable network. Hedera went a step further than most by officially committing to carbon-negative network operations and purchasing carbon offsets every quarter in a move they hope will “serve as inspiration for other public networks to adopt sustainable operating practices.” 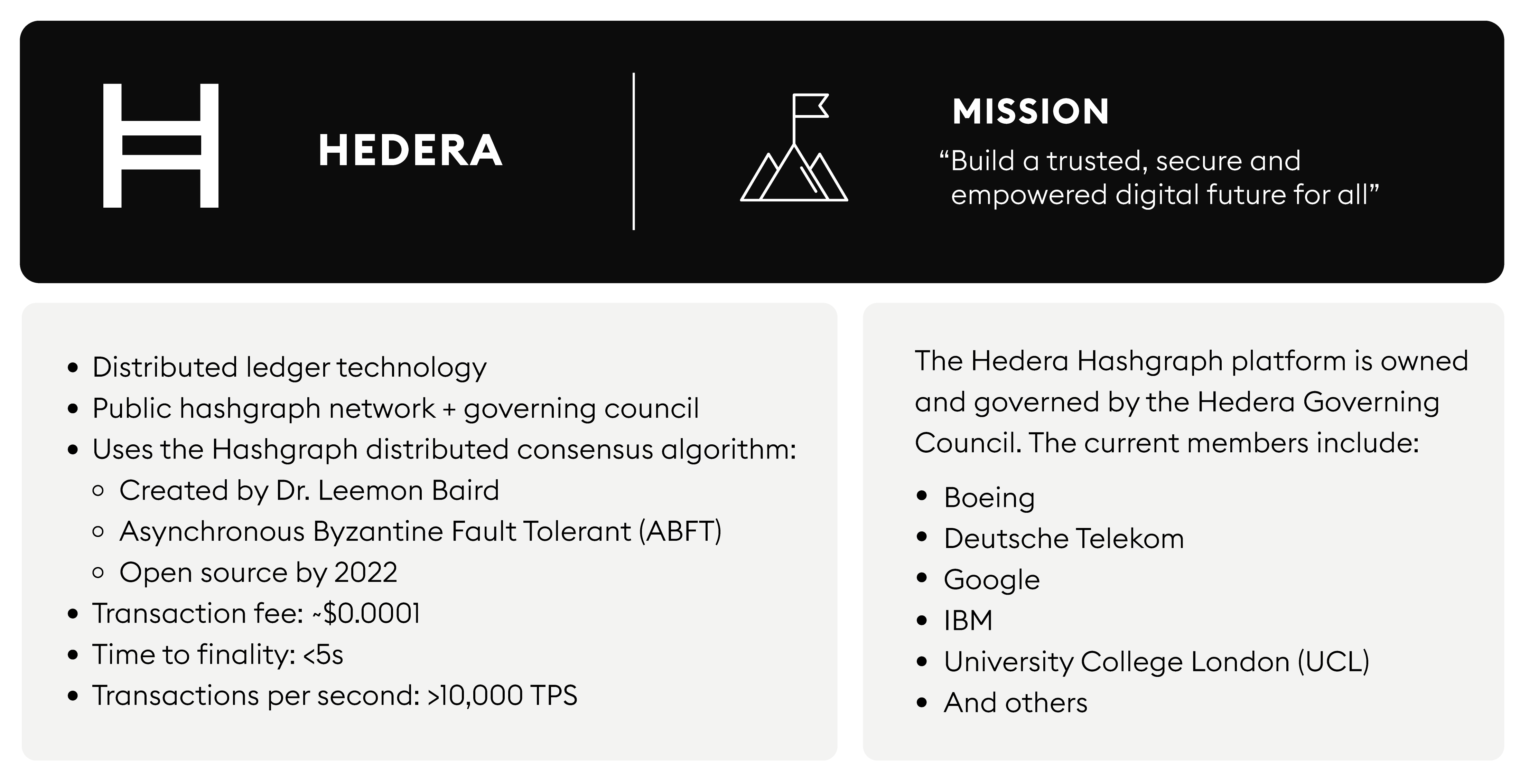 HBAR is the native token of Hedera and has a fixed supply of 50 billion tokens that can be used for various payments on the network: for peer-to-peer micropayments, applications’ transaction fees, services such as smart contracts, and for powering DApps.

“Weighted voting with HBARs makes it difficult and expensive for a bad actor to maliciously affect consensus — it would require them to own and stake over one-third of the network’s total supply of HBAR, which will not be possible for the first 5 years.”

What are the main features of Hedera?

Hedera users and developers can make use of four key features of the platform:

How does Hedera work?

Hedera is built on the hashgraph distributed consensus algorithm created by Dr. Leemon Baird, Hedera Co-founder and Chief Scientist. The two core components of this consensus algorithm are the gossip protocol, known as “gossip about gossip”, and virtual voting.

When a node receives information, they will communicate it to another random node. Then, they will gossip together about it, an event called gossip sync. Both the nodes will keep a record of the gossip sync, which includes a set of data - a timestamp, two hashes of two events below the gossiping, transactions, and a digital signature. All the records about who gossiped with whom and in which order is collected in the hashgraph. By giving information about this order, the transactions can be inserted in the ledger without the creation of blocks. However, all the nodes must agree.

This is when virtual voting comes into play. Even though the gossip protocol ensures every node knows about events taking place in the network, they still need to agree on the order. Instead of sending votes to each other in single or multiple rounds, the nodes can find the others’ votes by looking at the copies of the hashgraphs they have and apply an algorithm - the virtual voting algorithm.

Due to the collaboration of the “gossip about gossip” and virtual voting, the network can reach a consensus by agreeing on both the validity of every transaction and its timestamp in a short time, which allows thousands of transactions per second to be processed by the network.

Hedera wants to achieve a decentralised governance model but without anonymous or unknown leading groups. Instead, the network is governed and owned by the Hedera Governing Council, a committee of leading global enterprises. The Council doesn’t take part in the consensus on the network but acts to maintain the network’s stability and to decide on Hedera’s direction and roadmap. There can be up to 39 members of the Council. Each has an equal vote and can have up to two consecutive, three-year maximum terms.

To maintain transparent governance, council meetings are made available on the website within 30 days of their approval. At the moment, the Hedera Governing Council consists of 26 international companies from diverse industries, including; Boeing, Deutsche Telekom, Google, IBM, Chainlink Labs, Ubisoft and the University College London (UCL).

How to buy Hedera?

You can buy Hedera through cryptocurrency exchanges like Bitpanda using fiat currencies, e.g. euros or U.S. dollars. It’s a good idea first to get familiar with the Hedera price history and the current exchange rate. Once purchased, your Hedera investment can be viewed and accessed in a digital wallet similar to a banking app. You then have the option to hold on to your HBAR coin or sell it again via the exchange.

What is the Hedera price history?

Like other cryptocurrencies, Hedera is considered a highly volatile asset; its price has fluctuated through many highs and lows throughout its existence, and there’s no way to make a guaranteed HBAR price prediction. As always, it’s important to do your own research before investing in crypto.