China made headlines yet again when the government announced that it is going to ban Bitcoin mining in major regions. What impact will this move have on the mining industry and does it affect BTC? Let’s dive into it.

Why Bitcoin mining is energy-consuming

Mining is a vital part of Bitcoin, it’s the process of verifying transactions, securing the network and reaching common consensus without requiring a central authority. That means that mining is needed to ensure that only legitimate transactions are verified in the blockchain of the cryptocurrency and keep the network running. As an incentive to keep investing in specialised hardware and, of course, the energy that is needed, miners are rewarded with newly-minted bitcoins. In Bitcoin’s early days, miners used their private computers, but over the years, the industry got more and more professionalised and less attractive for individual miners.

Bitcoin mining is known to have high levels of energy consumption as miners are solving mathematical puzzles - and this process requires high computational power which, in turn, requires lots of energy.

This process is also called “proof of work” and illustrates that Bitcoin’s high energy demand is an intended feature rather than an unwelcome side-effect. The reasoning behind it is simple: the stronger the network gets, the more expensive it gets to attack it (eg. via a 51% attack). 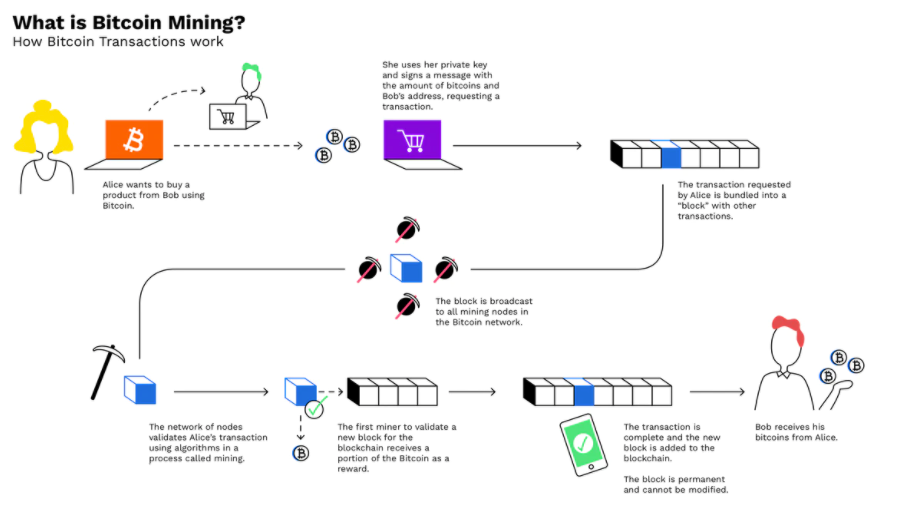 This is where the recent news about China’s Bitcoin mining shutdown comes into play. According to several estimates, up to 75% of Bitcoin mining power is located in Chinese regions. In May, China’s State Council announced that it’s going to ban mining in some provinces. This caused BTC’s price to drop and soon after, some local miners decided to shut down. In June, China extended its Bitcoin mining ban to the province of Sichuan, the second-biggest mining region after Xinjiang. Several theories are floating around as to why China is cracking down on crypto mining, one being its effort to go carbon neutral by the year 2060. The fact that Bitcoin mining used to be heavily reliant on cheap coal energy could impede reaching this target. The State Council explains its moves against cryptocurrencies and mining with concerns about financial risks and money laundering,\ and it is worth noting that China is working on its own central bank digital currency (CBDC) which they can control - Bitcoin would pose a threat to such a fully-centralised digital currency.

What does a lower hash rate mean for investors?

Whatever the actual reasons may be, recent developments already have had a major impact on the mining industry. By the end of June, the hash rate had dropped to its lowest level since May 2020. The hash rate reflects the amount of processing and computing power used in the whole Bitcoin network. Experts suggest that the hash rate will remain low until miners affected by the recent bans have relocated. A lower hash rate does not have an immediate effect on BTC holders and investors, but the network could be more prone to attacks than with higher hash rates.

For Bitcoin miners on the other hand, a lower hash rate means that it’s more lucrative again for them to mine, as they earn more BTC for the same amount of energy invested in the network. While the hash rate itself does not necessarily have a direct impact on BTC’s price, recent discussions about mining and hashing power have likely fuelled Bitcoin’s volatility in the past few weeks.

Where Bitcoin miners are moving to

So where are Bitcoin miners heading now that China is shutting down the local mining industry? The United States seems to be welcoming miners as analysts suggest Texas would be a preferred destination because of its renewable energy resources and welcoming regulations. This trend is actually not that new, as Bitcoin mining companies were moving their businesses from China to Texas as early as last year.

BIT Mining, one of the largest mining pools, announced its investment in a mining data centre in Texas a few weeks ago. However, the company will apparently move its main business from Sichuan to Kazakhstan, not the US. Kazakhstan seems to be an appealing location because of its cheap energy supply from coal mines. Other regions that are expected to profit from the China mining exodus are Canada, Iceland, Mongolia and Afghanistan.

We have to see how those changes will affect Bitcoin’s energy mix, which is a widely-discussed topic in mainstream media. According to a recent survey conducted by the Bitcoin Mining Council, they are estimating that 56% of Bitcoin’s energy in Q2 for 2021 is coming from renewable resources.

Even if the Chinese government were to change its stance about cryptocurrencies in the future, most miners are believed to be leaving for good because of the uncertainty. Other countries are struggling with Bitcoin mining’s high electricity consumption as well. Iran already ordered a shutdown of miners due to power outages. So, while some parts of the world are pushing the mining industry out, other parts are working hard to offer affordable energy and infrastructure to attract mining pools and be part of it.

What the shift of the mining industry means for BTC holders

It will (likely) have no significant impact on BTC holders and investors other than increased volatility while mining power is being relocated. However, some major mining companies are taking the opportunity of this transition phase to focus on renewable energy, as the source of Bitcoin mining’s high energy consumption has been a big point of criticism. Analysts also embrace the fact that Bitcoin mining will be more decentralised and not dependent on China anymore. Mining expert Zack Voell recently concluded on Twitter that everything that is happening now “is extremely bullish long term”.

So while a lot of the recent headlines have appeared to affect BTC’s price, these challenges can be seen as a phase of transition and institutionalisation of Bitcoin.

If you want to learn more about Bitcoin, check out the Bitpanda Academy and start trading today.