Originally created to explore program synthesis - the fully-automatic generation of software based on mathematical specifications without requiring further human intervention - NEAR Protocol quickly evolved into one of the most popular, easy-to-use platforms for developers for creating scalable decentralised applications. Read on to learn more about the details behind NEAR Protocol.

NEAR Protocol in a nutshell

In the greater scheme of things, the NEAR project has the objective of providing the fundamental infrastructure for the future of the internet with a layer-1 blockchain protocol that is scalable and easy to use. At the same time, the project is a universal and completely decentralised platform for developers and presently constitutes the foundation of numerous successful decentralised applications (DApps).

NEAR Protocol is based on a Proof of Stake (PoS) consensus mechanism called Doomslug, which also supports in rendering the project carbon neutral: in fact, thanks to this consensus algorithm, NEAR Protocol can claim to be generating a carbon footprint of 174 tonnes of CO2 per year, making it 200,000 times more carbon efficient than Bitcoin at the time of writing.

The project also launched Nightshade Sharding in March 2021 to start preparing for mass consumer adoption and increasing transaction numbers in a timely manner, allowing the project to scale with the number of shards in a linear fashion .

We envision a world where people control their money, their data and the tools to build new ideas.

Let’s take a look at NEAR protocol’s crypto ID: 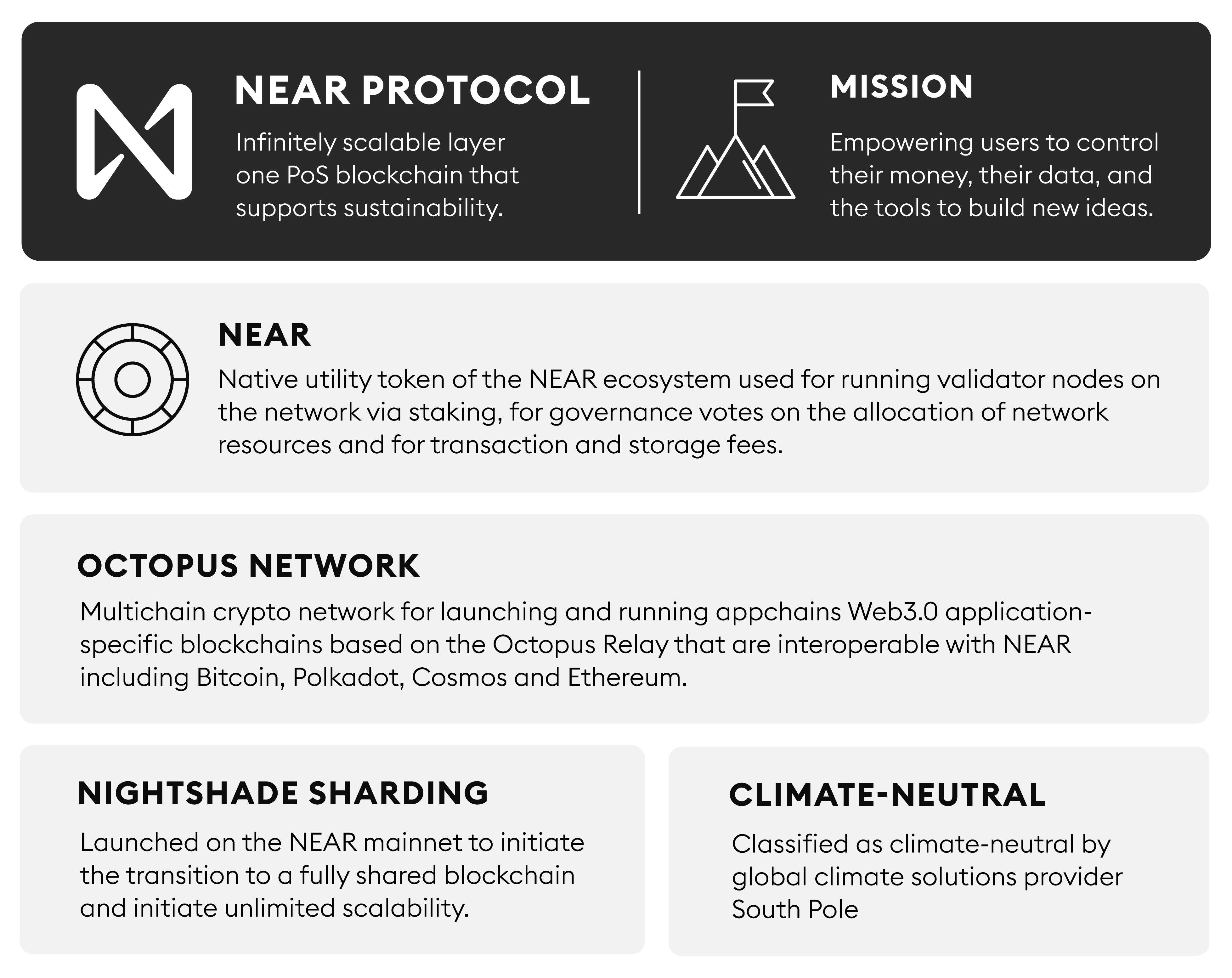 NEAR is a community-based, environmental- and developer-friendly blockchain with smart contract compatibility that can process up to 100,000 transactions per second. This allows for the extremely fast creation of decentralised applications (DApps), easily enabling a world of NFTs, DAOs and other new business models.

Sharding for a new level of scalability

The Bitcoin network notoriously suffers from high transaction fees and low speed and has the disadvantage of being scripted on Turing-incomplete language - which only offers limited functionality. Ethereum is working to improve performances and reduce costs. In light of all this, NEAR Protocol is looking to make improvements by bringing speed to a new level in the near future via sharding databases while keeping transaction costs very low.

The process behind NEAR is based on a horizontal approach to scaling by splitting the network into shards to distribute computation in a dynamic way, which increases processing capacities. In traditional networks, every single node in a network needs to execute the entire code, creating wasteful bottlenecks and slowing down processes. NEAR is looking to divide structures in a way that a large proportion of computations can be executed in parallel and scale capacities based on the number of nodes in the network.

In addition, NEAR allows such small nodes that they are able to run on simple elements hosted in the cloud. Thanks to these features, there are theoretically no limits to the capacity of the network, allowing developers to deploy DApps without needing to worry about future scalability of the infrastructure.

The technology behind NEAR sharding with the beautiful name (Simple) Nightshade, or “Nightshade” for short, has the goal of massively improving transaction throughput and total capacity of the blockchain with individual sets of validators processing transactions in parallel across multiple sharded chains.

Unlike during “regular” sharding, there is no need for all participants to download the full state or the full logical block. Instead, “chunk producers” only need to maintain the state corresponding to “their” shards. The list of all the transactions in the block is split into physical chunks (fractions of the next block) and one chunk per shard, ensuring reasonable hardware requirements and enabling increasing numbers of users to participate.

Thanks to these structures, NEAR Protocol can potentially achieve up to 100,000 transactions per second as well as near-instant transaction finality owing to a one-second block cadence while simultaneously keeping transaction fees at roughly zero.

How is #Web3 and #blockchain enabling the music industry? 🎶

Not famous? Not a problem. Musicians can now reach fans and fund their creativity using blockchain platforms and communities.

Get to know more from the powerful voices in the #NEAR music ecosystem.

The community behind the NEAR protocol is the NEAR Collective, which has the goal of building a secure and highly-performant platform for the management of high-value assets which are useful for everyone, like money or identity. At the time of writing, the NEAR Community has 83k+ members and is made up of Innovators, Creators and Contributors building a stronger ecosystem together. The greater NEAR community is made up of smaller groups called guilds. Each guild shares a specific mission and vision that pertains to driving a consumer-empowered world which is open and interconnected.

The NEAR protocol’s Rainbow Bridge was built by Aurora, NEAR’s Ethereum-compatible scaling solution and allows users to transfer their ERC-20 assets between NEAR, Aurora and Ethereum, using a NEAR wallet and MetaMask. While transactions between NEAR and Aurora are instantaneous, transfers involving Ethereum take longer and costs are not always easy to predict as they depend on the Ethereum gas price.

The NEAR project also powers Astro DAO, a platform that lets anyone launch a decentralised autonomous organisation (DAO) - groups that are self-organised towards a common purpose of that group. DAOs on Astro are quick and easy to set up, even for crypto newbies, and their number is continually growing. Astro provides the template for interested parties to automate what DAOs do quickly and further improvements for this project are under way.

The NEAR token (NEAR)

NEAR protocol’s token by the same name, NEAR, is used for different purposes, such as for running validator nodes involved in securing the NEAR network via staking and sharding. NEAR token is also used for governance votes on the allocation of network resources and finally as payment for transaction and storage fees on the blockchain.

We can’t stress it enough: before investing in any asset, make sure you keep the following in mind.

Where can you start investing in NEAR?

On Bitpanda, you can invest in NEAR and more than 2,000 other assets, including cryptocurrencies, crypto indices, precious metals and more from just €1, 24/7 and even automatically with Bitpanda Savings.

Italrugby and Bitpanda present: Back to winning - Watch the docufilm

Have you ever tried to find something in a book and spent your time...