While thousands of decentralised applications are running on Ethereum, its blockchain often struggles with congestion issues, leading to high gas fees and slow speeds. That’s where Polygon comes into play: this protocol aims to make Ethereum faster, cheaper and more scalable to power a full-on mass adoption of cryptocurrencies. Read on to find out more about Polygon and its token MATIC.

Ethereum is undoubtedly still one of the top choices for launching DApps and smart contracts. However, the blockchain often has issues in terms of speed and gas fees, becoming too slow and expensive for users. Though the project has been trying to solve some of these problems with Ethereum 2.0, this potential solution is still far from being a reality.

In the meantime, other platforms have been trying to devise ways to make Ethereum more scalable, faster and less costly; that’s where Polygon steps in. This layer-2 scaling solution strives to solve the speed issues and high gas fees Ethereum can encounter through promoting the widespread adoption of cryptocurrencies.

Polygon in a nutshell

Before rebranding under the name it has today, Polygon was known as the Matic network. Founded in 2017 by Jaynti Kanani, Sandeep Nailwal and Anurag Arjun - who were joined by Mihailo Bjelic in 2020 - Polygon has the ambitious goal of optimising Ethereum for mass adoption. In the words of the project’s official website:

“Polygon is a Layer 2 scaling solution that achieves scale by utilizing sidechains for off-chain computation and a decentralized network of Proof-of-Stake (PoS) validators.”

As always, let’s take a look at an overview of Polygon’s mission and main features in its crypto ID. 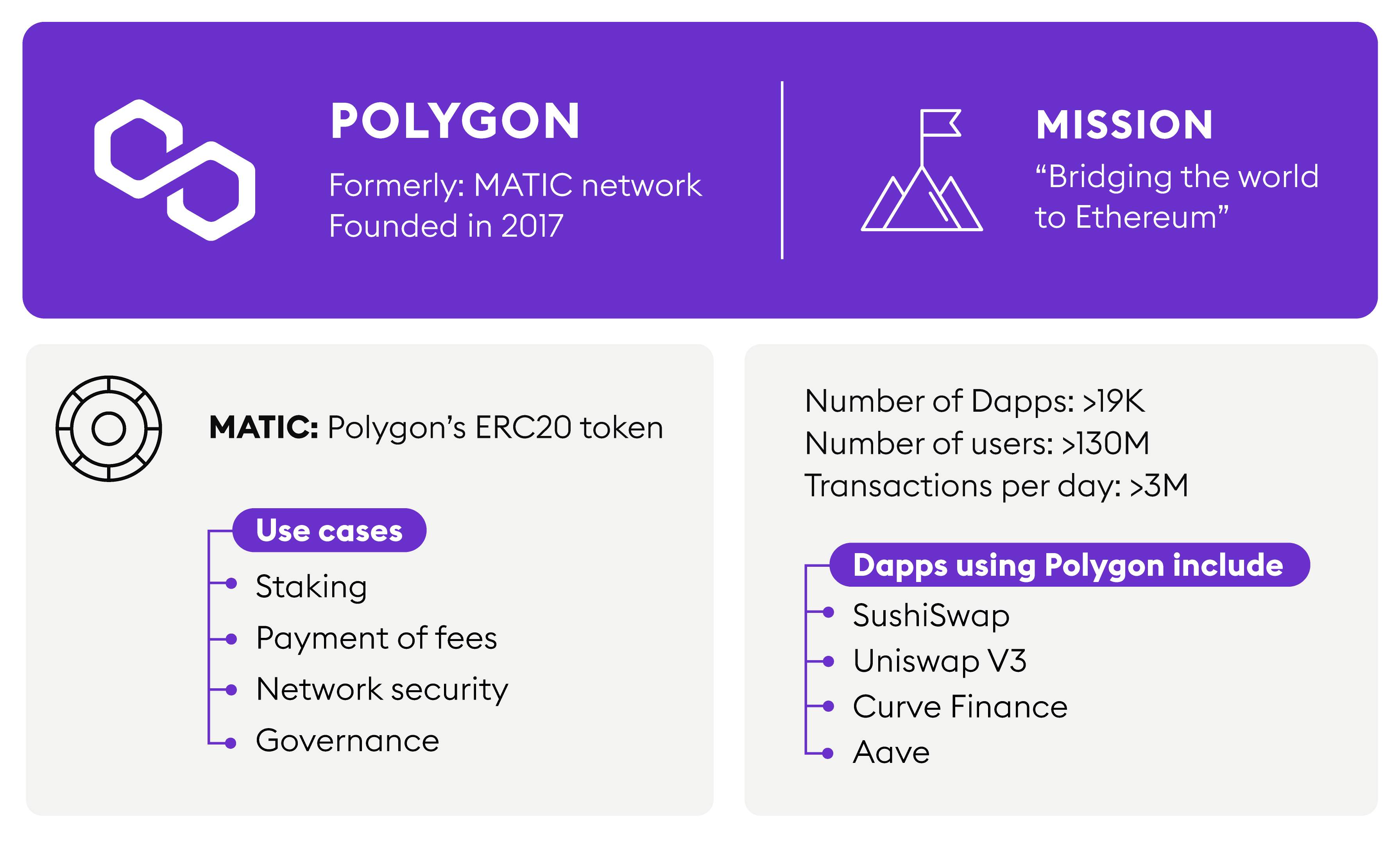 How Polygon interacts with Ethereum

Congestion issues leading to high fees and low speed are problems that Ethereum has been trying to solve for a long time now. Just recently, the Otherside Metaverse land sale sent ETH gas fees up to $5k and even crashed the Ethereum blockchain for a while.

As things stand, and probably until the full launch of Ethereum 2.0, imagine Ethereum as a big, crowded and slow road with a very expensive entry fee. What Polygon wants to offer, in the scope of this metaphor, is not a different road, but a parallel, faster one for a lower price that brings you to the same exact destination.

To give you the alternative parallel road mentioned above, Polygon uses a set of tools, including sidechains and bridges.

Sidechains are separate blockchains running alongside a “main”chain, like Ethereum or Bitcoin, that typically aim at improving the mainchain in some ways. Sidechains have their own consensus mechanisms to enable block creation and are able to communicate with the main chain. Communication between sidechains and mainchains are what allow assets like tokens to be transferred from one chain to another and it’s typically made possible by a smart contract created on the mainchain. However, sidechains carry significant risk: if their consensus mechanism fails to keep up the block creation - for instance, if it gets compromised - all the funds on the chain can get lost.

Polygon bridges: the Plasma bridge and the PoS bridge

Polygon has two main bridges that allow for the transfers of assets - including NFTs and tokens - from Polygon sidechains to the Ethereum mainchain and vice versa: the Plasma bridge and the PoS bridge. Both “bridges” consist of a series of smart contracts implemented on the Ethereum blockchain to help with moving digital assets between chains.

Though their goal is the same, the PoS and the Plasma bridge have some peculiar differences.

While the Plasma bridge makes use of the Ethreum’s security systems, the PoS bridge uses - as the name might suggest - a Proof of Stake consensus algorithm powered by external validators.

In terms of time that is required, the PoS bridge enables instant security for deposits, while withdrawals may take up to 3 hours to be confirmed. In the case of the Polygon Plasma bridge the securing processes and measures require more time as there’s a 7-day withdrawal period, due to the Plasma exit mechanism.

Another difference is which tokens are supported for the transfers: the PoS bridge supports ETH, ERC20, ERC721, ERC1155 and other tokens, whereas the Plasma bridge only allows transfers of ETH, ERC20 and ERC721 tokens.

Ethereum 2.0 and the future of Polygon

Since Polygon works as a layer 2 to Ethereum, many believe that Ethereum 2.0 might seriously threaten the existence and utility of Polygon. So what will happen to Polygon once Ethereum 2.0 is live?

It’s important to know that Ethereum might soon be only one of the blockchains supported by Polygon, as the layer 2 solution might support other main chains in the future. This could make the full implementation and consequent switch to Proof of Stake less “threatening” for Polygon.

Also, though it isn’t possible to say with certainty, Vitalik Buterin seems to believe that both layer 1 and layer 2 scaling solutions (such as Polygon) could coexist once Ethereum 2.0 is fully implemented.

More on Polygon’s mission and products

Polygon wants to offer an enhanced and simple user experience to developers and to provide smooth interoperability between blockchains. The protocol wants to allow developers to create and deploy Ethereum-compatible blockchains in a matter of a few clicks - even with just one click for present blockchain networks.

Every blockchain created on Polygon is compatible with all the Ethereum tools and can communicate with the Ethereum mainnet and other blockchains to allow for interoperability between chains.

Polygon Edge is the framework dedicated to blockchain creation and implementation. Developers can create Ethereum-compatible private or public blockchains, as well as customise and run them via Polygon Edge. According to Polygon’s official website, implementing Polygon Edge results in instant transaction finality and a block time of 2 seconds.

Polygon Edge also powers the Polygon Supernets, a recently-launched platform meant to provide developers with an even more secure, decentralised and dedicated infrastructure for creating and launching blockchain networks. Polygon has allocated $100 million to the “development and adoption of Supernets”.

Polygon believes in “Web3 for all” and it sets out to give developers the opportunity to build scalable DApps in a user-friendly and secure platform with low transaction fees. As stated in the official website of the project:

“The Web3 applications built on Polygon offer low fees, high scalability, and hold themselves to highest standard of security”

As of today, more than 19,000 DApps are using Polygon, including SushiSwap (SUSHI), Uniswap (UNI), Curve Finance (CRV) and Aave (AAVE).

Those who are interested in creating or deploying DApps on Polygon might be happy to know that the platform supports many tools used on Ethereum. Smart contracts migration on to the Polygon chain is also quite simple since any smart contract can be migrated to Polygon as long as it is totally EVM compatible.

Polygon has recently launched Polygon ID, a “blockchain-native identity system”. Polygon ID is a zero-knowledge solution to verify one’s identity on the blockchain without needing to share personal information with third parties.

This feature protects the privacy of its users through the use of zkSNARK technology: zkSNARK stands for “Zero-Knowledge Succinct Non-Interactive Argument of Knowledge” and is cryptographic proof held by one party that can confirm information - someone’s identity for instance - to another party without sharing the information itself.

From carbon neutral to carbon negative by 2022

Polygon is already carbon-neutral but recently announced its plan to go carbon negative by 2022. The platform shared its intention to offset carbon emissions by pledging $20 million to projects and initiatives for fighting climate change in its Green Manifesto.

The network will start with a $400,000 purchase of Base Carbon Tonne (BCT) and Moss Carbon Credit (MCO2) carbon credits. The tokens bought by Polygon correspond approximately to 90 thousand tons of CO2 emissions. The platform is partnering with KlimaDAO which it will also buy these carbon credits from. KlimaDAO will work on analysing, managing and mitigating Polygon’s carbon footprint. Their ambitious plan is to become carbon negative.

MATIC is the ERC20 token powering the whole Polygon machine. It is used for governing the network, the payment of gas fees, network security and staking.

Buy and stake MATIC on Bitpanda

On Bitpanda you can buy in MATIC and 1,000+ other assets, including cryptocurrencies, crypto indices, precious metals and more 24/7, from just €1.

Not only: you can also stake MATIC on Bitpanda. With Bitpanda Staking, your estimated rewards from staking MATIC are 12.26% with no lock-in, no warm-up periods and weekly rewards and auto-staking instead. And that’s not all: the early bird rewards currently stand at 24.52%.

Are you new to Bitpanda?

Registering on Bitpanda is fast, simple and secure: you can do it via Bitpanda’s web app or via our apps for iOS and Android. Go ahead and verify your account, make your first deposit using your favourite payment method - including SEPA Instant - and start investing right away.