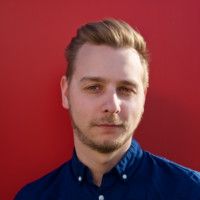 In this article, we are examining the way we are running this network of nodes and how we use different tools to provide a consistent and maintainable infrastructure.

At Bitpanda, we have a strong belief that cryptocurrency transactions should be available to all of our customers quickly and easily. To achieve this goal, we need a strong, secure and reliable system, which is able to deliver the confidence and trust necessary in providing the services our customers are using on a daily basis.

At the core of our transaction system, we are handling tens of thousands of blockchain transactions every day, 24/7 and without interruptions. Delivering this without any reliable and independent connection to the blockchain would be pretty much impossible. For this reason, we decided to run our own network of cryptocurrency nodes for all of the coins we support on our platform. In this article, we are examining the way we are running this network of nodes and how we use different tools to provide a consistent and maintainable infrastructure.

Since the inception of the Bitpanda platform, the choice to have our workload running in the cloud was a given. This gives us the flexibility to scale our systems indefinitely for our daily growing user base and allows us to frequently add new services. For this purpose, we are deploying our infrastructure in AWS, together with modern tooling and DevOps practices in place. Terraform, Packer, Docker and a reliable CI/CD, in our case Gitlab CI, are our main solutions for deploying our resilient cryptocurrency node infrastructure.

Combining these tools to build the containers with Gitlab CI, as well as deploying the infrastructure with Terraform and Packer, allows us to reuse our components and be faster and more reliable when deploying a new cryptocurrency node to our platform.

To Kubernetes or not?

Kubernetes has become the de facto industry standard for running containerized workloads and is also used for all the application workloads at Bitpanda. So it would have made sense to also run our cryptocurrency nodes in Kubernetes, right? Even though this is a valid point to make and it could have been implemented this way, we ultimately decided against it for the following reasons:

As we did not want to lose the benefits of running workloads in containers, as with our other services, we decided to use Docker images together with Packer for building an Amazon Machine Image (AMI), where we can run our cryptocurrency node containers.

All of our cryptocurrency daemons have their own project in our Gitlab and follow guidelines and naming conventions, so we can use the same CI templates and terraform module for each coin. Some of the important rules are that:

The following is an example of our bitcoin docker image:

After the docker image is prepared, our automatic CI builds the image and tags it with the corresponding ENV version number from the Dockerfile and pushes it to ECR in AWS.

As some of the nodes would take very long to catch up with the network, we implemented custom entry points to check if the data volume is empty and download a snapshot in order to speed up the sync with the network. Using these snapshots means, should we need to resync because of a network upgrade or something similar, we can be back in sync for our customers in minutes instead of days.

Now that we have the Docker image ready, we can continue our preparation for the host of the system. We choose Packer as our go-to tool for creating our custom-built AMIs and Amazon Linux 2 for our base image for all of our self-managed servers. For monitoring purposes, we include the CloudWatch agent in the image, so apart from CPU and memory usage, we can gather extra metrics like EBS volume usage and metrics from the Docker daemon. These metrics are exported every minute to CloudWatch and enable us to set thresholds and alarms. The container itself is managed via a custom systemd unit, which acts as a supervisor process for managing our Docker container.

What is important to note here is that the EnvironmentFile gets populated by the user init script from terraform, so we can provision the mount directory and image dynamically, based on the information provided from our custom terraform module, which we will explore in the next section. Also, the custom parameter for the image version allows us to change the image we want to run with a simple command as:

which would start up the image tagged with version 0.20.0 from our previously-created Docker image.

Let’s spin up our first node!

After both the Docker image and the AMI is built, we are now able to use Terraform to spin up the blockchain node. For this purpose, we custom built our own module so we can reuse the same code for all of our nodes. Here is an example:

So let's take a closer look at what it is happening here exactly:

After applying the module with terraform the following resources are created in AWS: 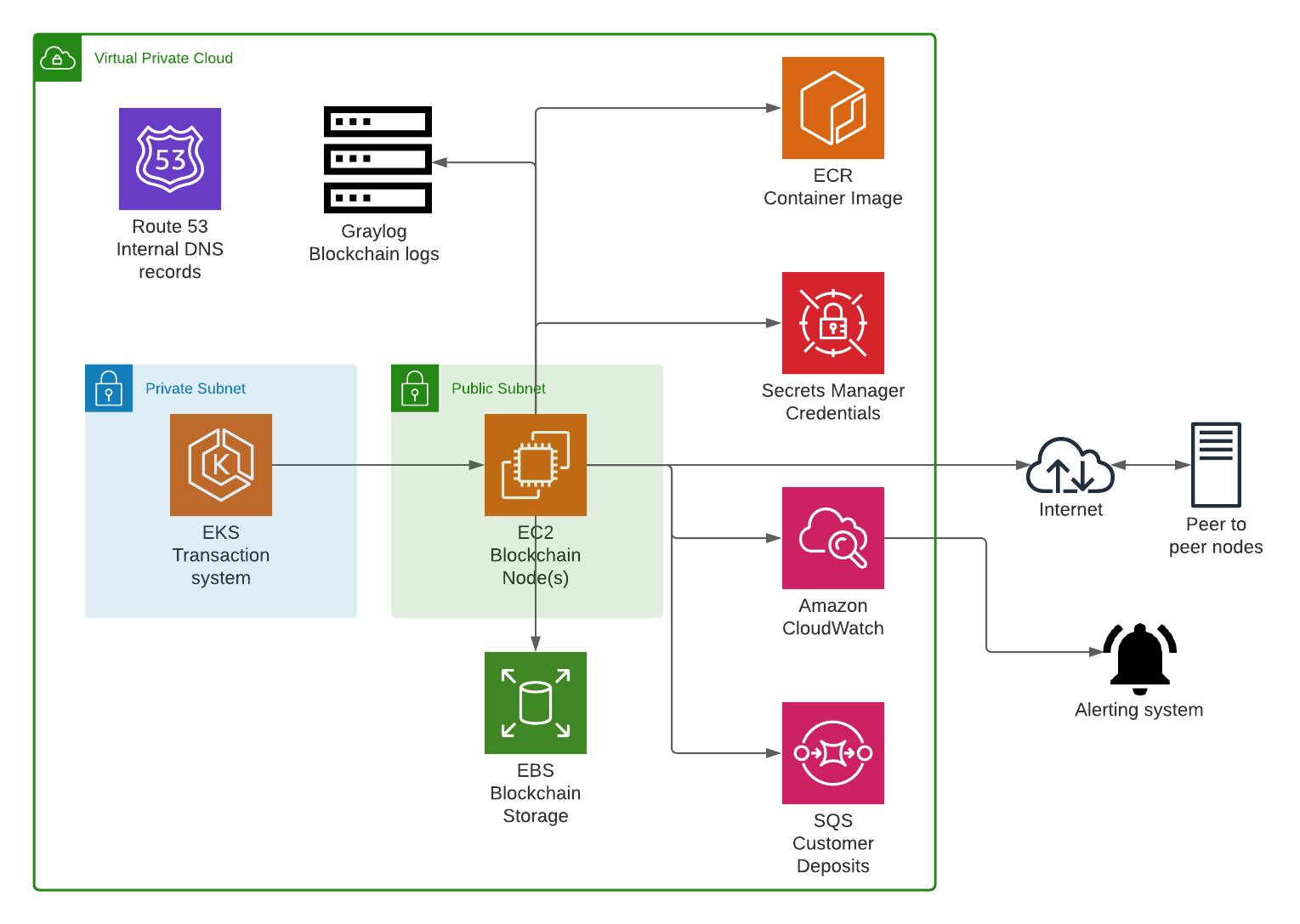 During the first boot of the module, the init user data script provides some important functionality for bootstrapping the node:

If we are now connecting to our newly-built node, we can verify this via our custom systemd unit to see if we have a working bitcoin node.

Monitoring never goes out of style

Now that we have our node up and running it is important to keep it that way. Apart from sending the logs of the nodes to our centralised logging platform Graylog, where our developers can inspect and debug problems, we are also collecting custom metrics to get the current block height or equivalent (like milestones in IOTA) - amongst others - to CloudWatch. Below, you can see an excerpt of our block height and central monitoring dashboard for our nodes: 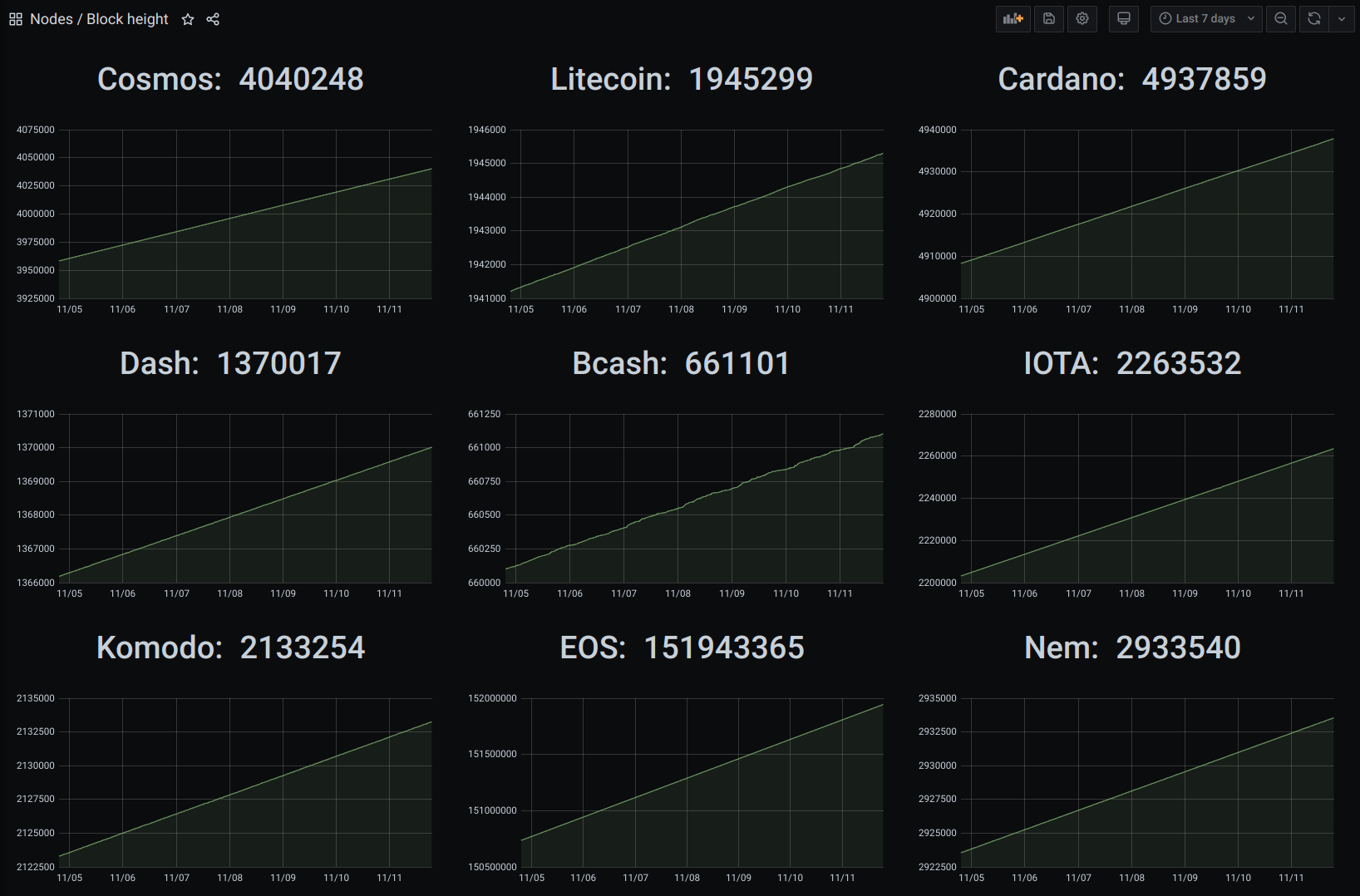 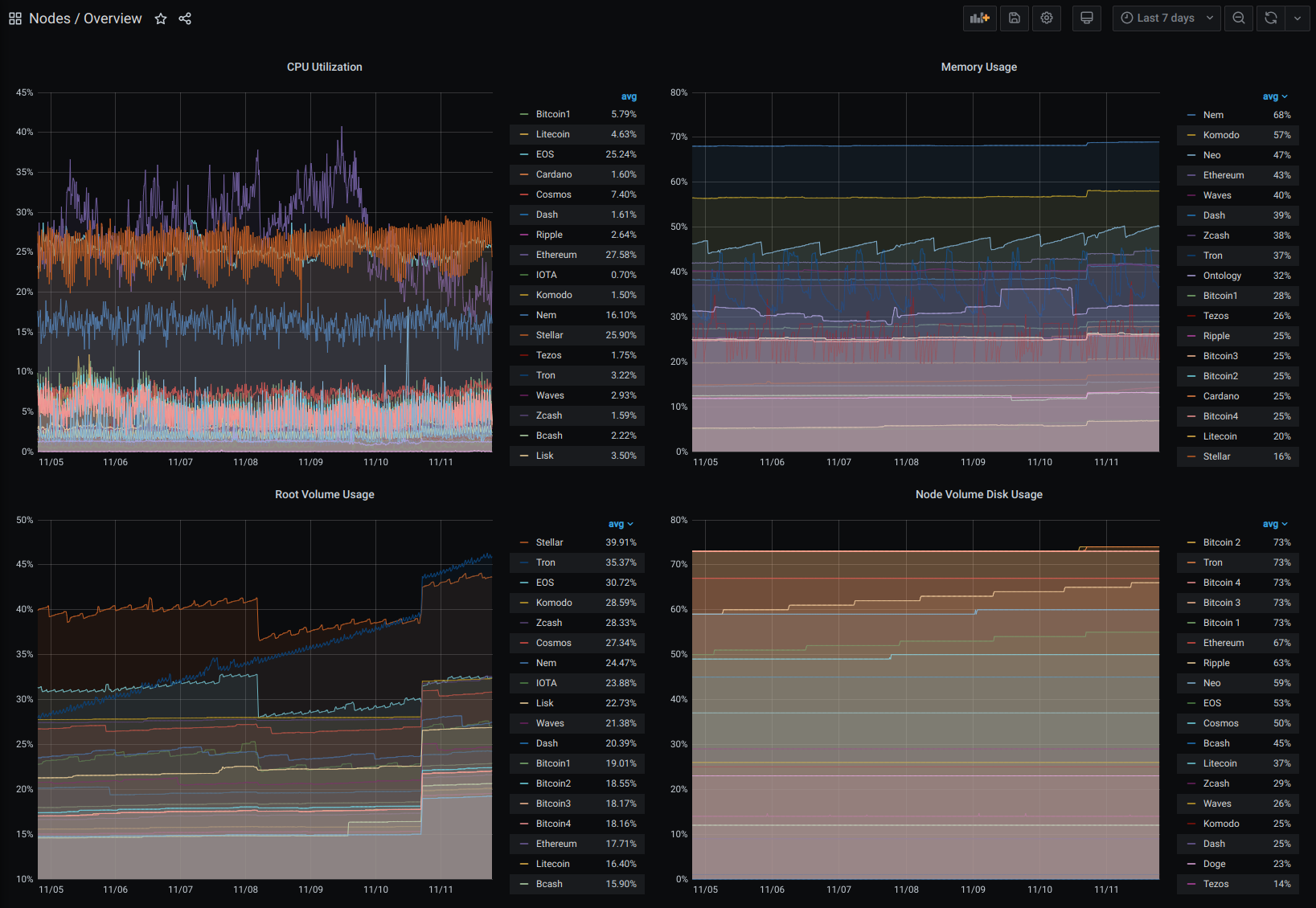 Additionally, we have alerts for all the important metrics, like one node is not syncing anymore or the hard drive is running out of space or similar, in place. Fine-tuning these thresholds is important to avoid any false positives in the alerting system.

No end in sight

Keeping up to date with the fast-paced development in all of the major cryptocurrency projects is a real challenge. As we are currently supporting more than 25 different coins on our platform, we have to always be up to date about the latest network upgrades or upcoming hard forks. To help us with this task we are using a dedicated Slack channel, including an automatic GitHub watch bot, which notifies us about upcoming releases. If a new release is announced, our dedicated blockchain team will take a look at the changes and, if needed, prepare the upgraded configuration of the docker image and also changes in the application code itself. But how do we get these node updates in a secure way to our instances?

SSM to the rescue!

As security is one of the pillars of the Bitpanda infrastructure, we don't have any open connection or similar on any of these instances, so how do we connect? AWS provides Systems Manager (SSM) installed by default on all Amazon Linux 2 AMIs, which allows us to run any command on any enabled instance. Additionally, we don't have to care about any SSH Keys and can grant or revoke permissions only to certain IAM Roles in a centralised place (IAM). To upgrade our nodes with Gitlab CI and SSM, one of our example commands, would look like the following:

As with any platform, there is always room to improve, so we are now looking into automating maintenance tasks, like resizing the EBS volume when the blockchain reaches a certain threshold or reacting to a stuck node through custom lambda functions, which we will highlight in one of the upcoming blog posts. This would enable us to build a self-healing system, where little to no human intervention is needed and greatly reduces the operational overhead.

If you are, after this long post, still reading this, I hope you got a good feeling about what it takes to run a cryptocurrency platform on that scale, so you, as a customer, can benefit from the convenience of sending and receiving cryptocurrencies in a matter of seconds to anyone in the world.

We’re proud to announce our latest Talent Hub in the beautiful city...

Hola Barcelona! Discover our new Tech Hub and meet our VP of Engineering

We’re giving a warm welcome to Albert Zaragoza as VP of Engineering....

Interview with Bitpanda’s Head of Engineering