The Sandbox, the blockchain-based gaming platform for players by players

Launched back in 2012 by Pixowl as a mobile game, today The Sandbox is a gaming platform where blockchain, metaverse, DeFi and NFTs come together for already more than two million registered users. The Sandbox isn’t just a gaming environment, as it offers many earning opportunities to its players. Learn more about The Sandbox metaverse and the platform’s native token SAND.

What is The Sandbox?

As technology rapidly advances, some projects have been taking steps to keep up the pace and The Sandbox deserves a special mention among them. Though today The Sandbox is a decentralised metaverse and gaming platform running on the Ethereum blockchain, it was initially born as a smartphone game in 2012 and moved to the blockchain space with the launch of its metaverse last year.

As The Sandbox metaverse is still under development, some events have been planned for users to explore the environment, to experiment with it and to provide feedback. Two of these events, called Alpha Season 1 and Alpha Season 2, have already taken place with players taking part having the opportunity to navigate the metaverse as well as earn NFTs and rewards paid in SAND, the platform’s token.

Before taking a closer look into The Sandbox, as always, let’s start with its main features in its crypto ID: 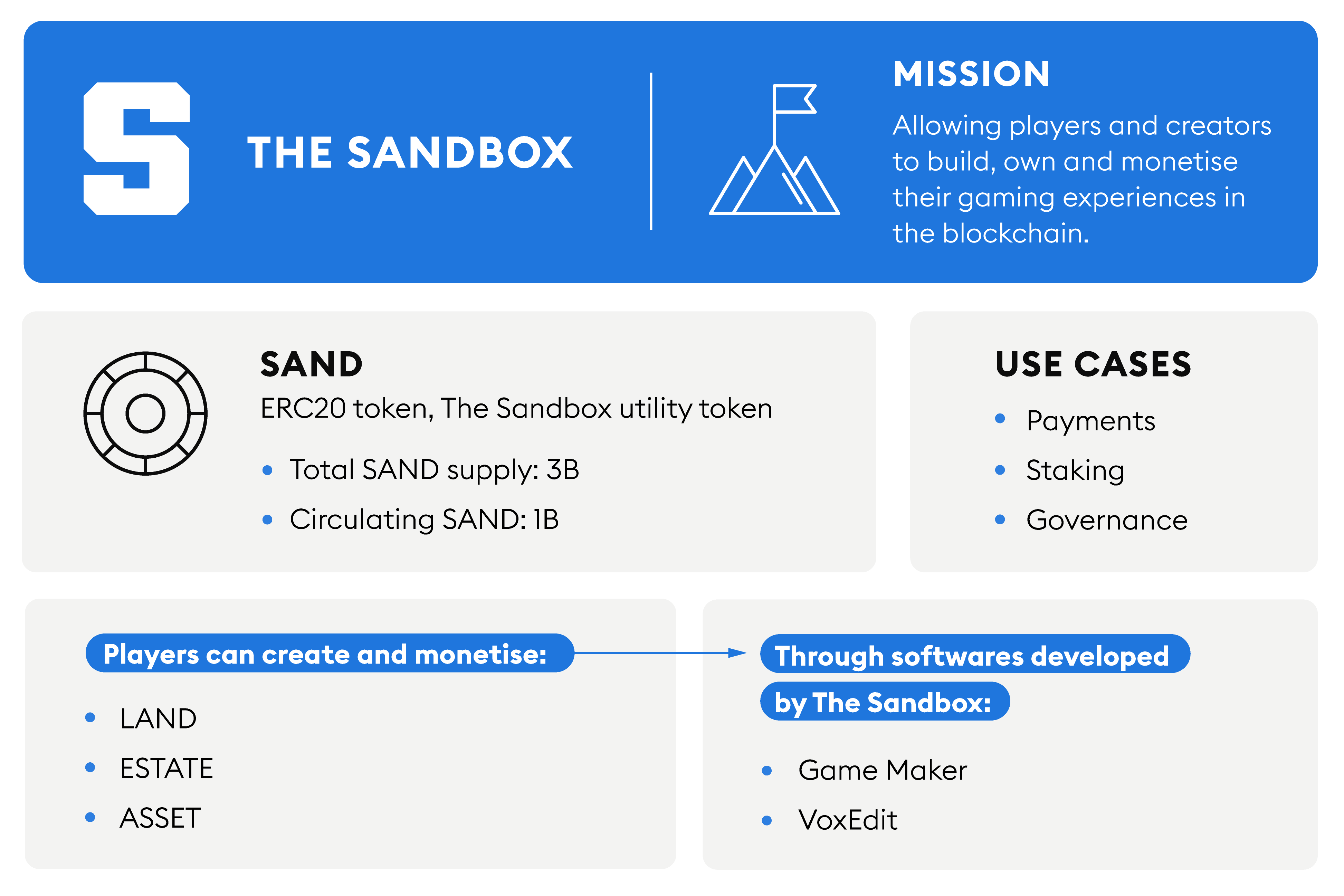 Players can shape their gaming experience in The Sandbox by engaging and interacting with the community through personalised avatars, exploring the environment, solving puzzles and enjoying games and quests. They can also implement a broad variety of NFT assets in the metaverse and even create their own games inside the metaverse.

As part of handing the gaming environment back to the players, The Sandbox incentivises monetisation of the content produced by its own users: every asset, game and experience built and launched in The Sandbox can be sold by the creators in the marketplace. As explained on The Sandbox website:

“The Sandbox is a dynamic virtual world that brings players and creators together to build, own, and monetize unique experiences in the Ethereum blockchain”.

Land and estate in the metaverse

Similar to other metaverses, the land of The Sandbox can be purchased as an NFT. In The Sandbox, there will be a total of 166,464 parcels (called LAND) for sale, which users will be able to build on and populate with games and assets - either created or bought from the marketplace. LANDs can be combined into a bigger property that becomes an ESTATE. Their dimensions can vary, ranging from small, medium, large and x-large depending on size (from 3x3 to 24x24) and lands per parcel (from 9 to 576).

LAND and ESTATE can be personalised and monetised in many ways, although some are just upcoming and are not yet available to users.

Players will be able to earn from their land by building pay-to-play creations on the LAND, renting it to other players and using it as an advertising space for both self-promotion and third parties.

Staking the platform’s utility token SAND on LAND is also in the pipeline.

The Sandbox seems to be very committed to giving everyone, “game designer or not”, the chance to build gaming experiences in the metaverse and earn from them. Like Enjin, no coding experience is required to create these products.

Pixowl, the game studio behind The Sandbox, made this possible by creating the software Game Maker. In their own words:

“The Sandbox Game Maker is the toolbox you need for your imagination to come to life.”

The Game Maker is a game design software for creating, testing and sharing 3D gaming experiences on The Sandbox metaverse. While the software itself can be downloaded and used free of charge, players need to own or be renting LAND to publish their creations in the metaverse. All the experiences created can be published in The Sandbox metaverse and creators can decide to set up an access fee for other players.

Things that can be developed through the Game maker include one-player mini action and adventure games, quests to solve such as escape rooms or labyrinths, NFT galleries and museums, as well as advertisement billboards, public or private social hubs and houses.

Create your assets in the metaverse: VoxEdit

Aside from gaming experiences of many kinds, players in this metaverse can also create various items and subjects - from chickens and dragons to paintings, clothes and weapons.

In The Sandbox, these creations are called ASSETs: they can be created and added to the metaverse or to an environment built on LAND. They’re not gaming experiences on their own, but they provide additional content for them. There are five main categories of ASSETs: Entities, Equipment, Wearables, Art and Blocks.

The appearance of avatars can be customised by creating Wearables, such as sneakers, clothes and also faces. Art is the macro category of ASSETs that include all objects with a decorative function in the metaverse - it could be a statue, a painting or even a song.

The main purpose of Blocks is to change the surrounding environment: while blocks such as water and lava are already available, players can put their imagination to work and create new ones. Entities are usually non-playable characters (NPC): it could be a dog, a dragon, but also a nurse or a farmer. Equipment is objects that can help players complete games or quests, such as weapons, shields or armour.

All these items can be created and animated with VoxEdit, the software developed by The Sandbox, and can then be published on the metaverse and sold on the marketplace as NFTs.

SAND is The Sandbox’ utility token, an ERC20 token used in the platform and metaverse for payments, but also for governance and staking. The total SAND supply is capped at 3,000,000,000 tokens, with around a third of the supply currently circulating.

Half of the SAND transactions collected from sales of LAND, fees, subscriptions and sales of certain categories of NFTs go to The Sandbox Foundation. The Foundation’s main purposes include supporting players and creators through grants and funding initiatives such as The Creator Fund and The Game Maker Fund.

Where to start your research

You can learn more about investing in our Bitpanda Academy and Bitpanda Blog and make sure to check out the official website of the assets you’re considering investing in - sandbox.game in the case of The Sandbox.

Take a closer look at what this project offers and what plans are ahead for it before making an investment decision. Remember: investing carries risks, so think about them before investing and stick to the golden rule of never investing what you can’t afford to lose.

Where to buy SAND

You can buy SAND on Bitpanda: open your account in a fast, simple and secure way via Bitpanda’s web app or on our app for iOS and Android. Verify your account, make your first deposit using your favourite payment method - including SEPA Instant - and you can start investing right away in SAND and many other assets.