The London Fork on Ethereum explained

The anticipated Ethereum London hard fork containing five Ethereum Improvement Proposals (EIP) will launch this week. Of these five EIPs, EIP-1559, has been the most controversial due to its radical redesign of the network’s fee market. How will the upgrade impact the price of Ethereum?

The anticipated Ethereum London hard fork will launch this week. It contains five Ethereum Improvement Proposals (EIP), which are designed to improve the Ethereum network. Of these five EIPs, EIP-1559, has been the most controversial due to its radical redesign of the network’s fee market, but other proposals also play an important role. The big question is, how the upgrade will impact the price of Ethereum.

EIP-1559 brings the most radical change and  will play a significant role in ETH’s price development since it has a deflationary effect when a transaction occurs. It activates a mechanism to curb total supply growth over time by taking a variable amount of ETH out of circulation each time a transaction is executed. ETH is sometimes seen as an inflationary cryptocurrency with a total circulating supply of roughly 117 million ETH. The upgrade will change the emission schedule which will cause a portion of Ethereum’s base fee per gas to be burned to reverse the direction of Ethereum’s supply schedule and to make ETH a deflationary currency. This upgrade alone could potentially drive the price of ETH when demand becomes higher than supply especially in a growing DApps market.

Directly related to EIP-1559 improvements, EIP-3198 will be introduced which will return the value of the base fee at the current block to computers that run Ethereum clients. This will allow smart contracts or DApps to get the value of the base fee immediately. Additionally, EIP-3529 will remove some gas refunds and EIP-3541 will reject new contracts with the 0xEF byte, while existing smart contracts with the 0xEF byte will remain. Lastly, EIP-3554 will delay the increase in mining difficulty to December 2021. This difficulty upgrade simply makes Ethereum mining less appealing and pushes the network to move from ETH 1.0’s Proof of Work consensus to ETH 2.0’s Proof of Stake consensus mechanism.

ETH is currently valued at around €2,150 per coin, with a recent all-time-high of €3,600. Ethereum’s total market cap currently stands at around €220 billion and is the second largest cryptocurrency in terms of market capitalisation. Ethereum’s value is largely derived from the utility it provides by powering transactions within the DApps that are built on it. Simply put, more DApps leads to more transactions which leads to a higher ETH price. 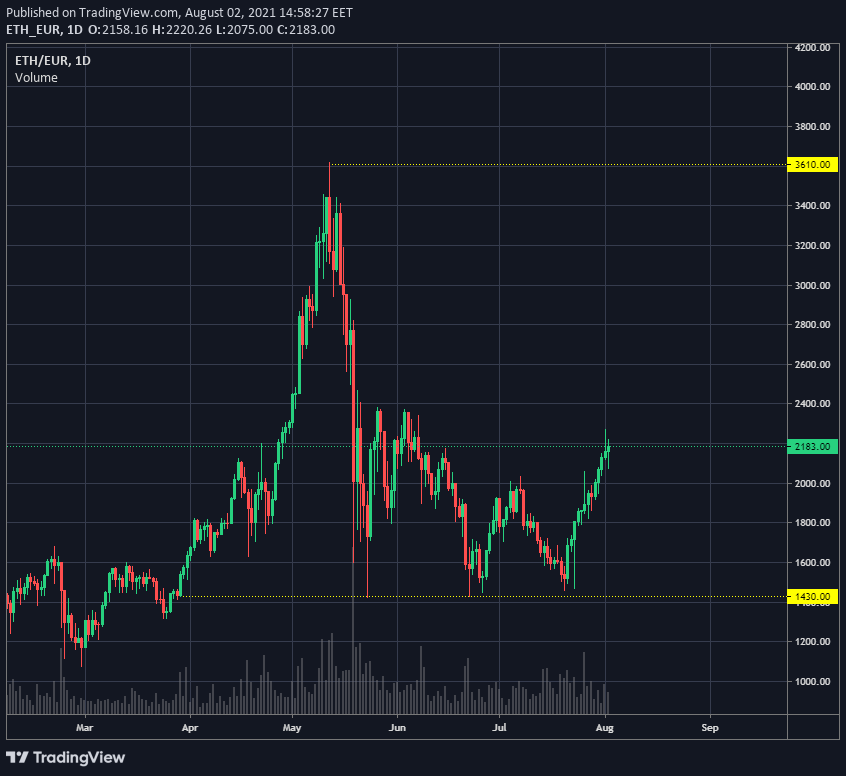 Ethereum is being developed far more than any other smart contract network. This is the major reason why ETH is the second-biggest cryptocurrency in terms of market capitalisation. The positive effect on the Ethereum price could come from the EIP-1559 upgrade which will burn a portion of ETH to cover transaction fees, meaning that Ethereum’s supply will decrease over time.

The other big change happening is the shift from a Proof of Work consensus to a Proof of Stake consensus sometime in late 2021 or in early 2022. Proof of Stake will bring sustainability and scalability to the network and will also decrease the total issuance of new ETH by roughly 90%. Both upgrades should be deflationary for Ethereum’s supply, which is currently an inflationary factor for the price of ETH. 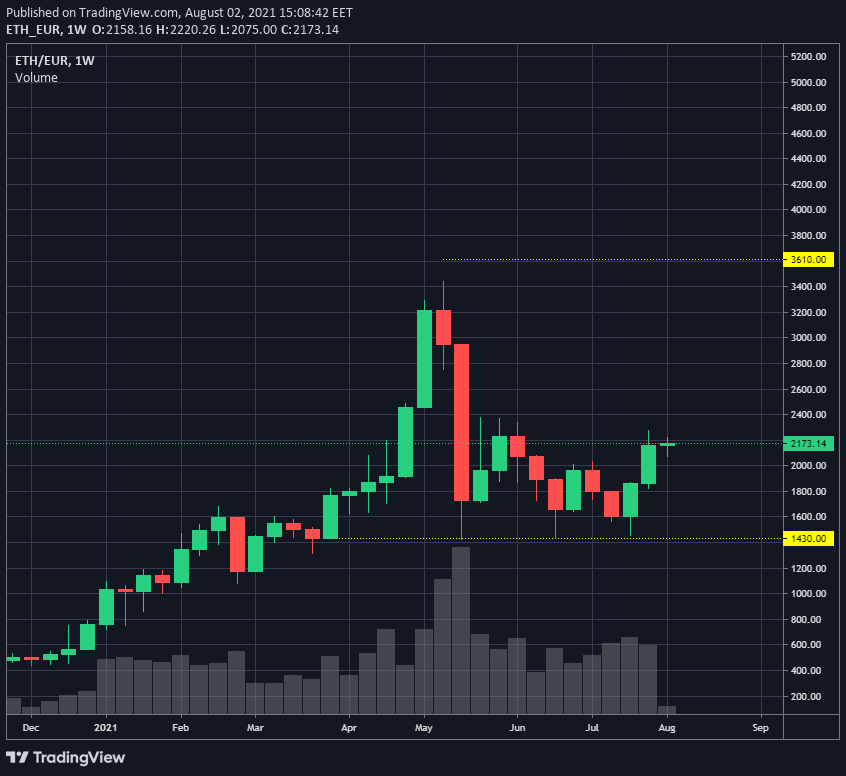 A reduction in new coins being minted in addition to a burn mechanism that reduces supply could be a catalyst for the price of ETH and could even translate into higher returns than those for Bitcoin in the coming years. Ethereum is slowly decoupling from Bitcoin which is noticeable this year as Ether has a higher year-to-date return than Bitcoin. The correlation between the two biggest coins is decreasing and Ether can now be said to be  outperforming Bitcoin. How much of a price increase can be seen, depends on market conditions and overall sentiment. The crypto market is moving positively and has experienced the biggest weekly gain in more than 4 weeks as sentiment improved, while investors pushed the prices higher. The Crypto Fear & Greed Index rose from a score of 10 (extreme fear) to a neutral zone to a score of 50 in the last few days. 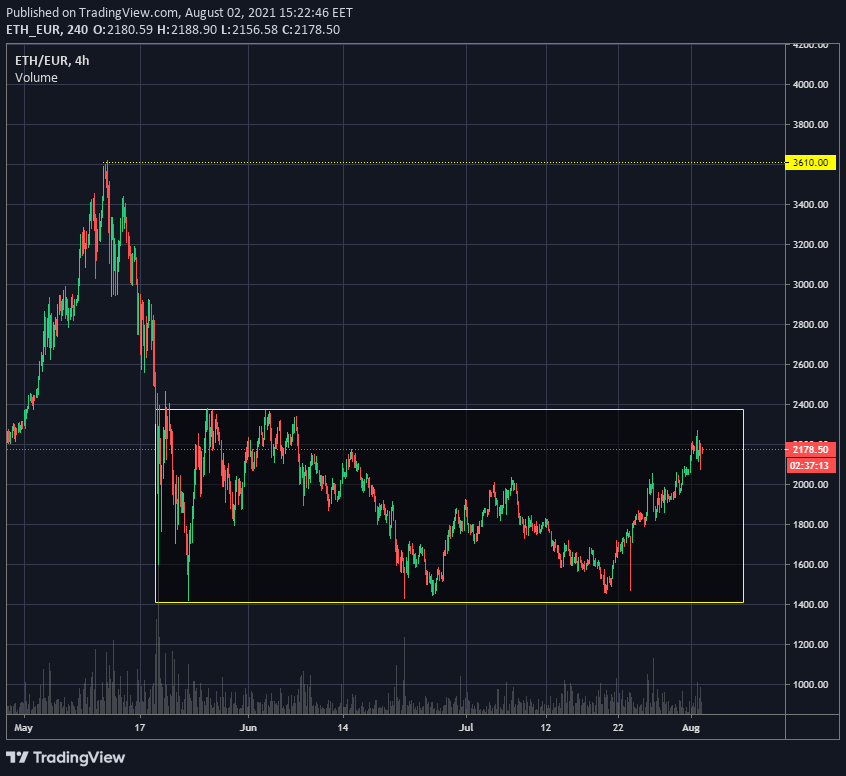 It took more than two months for the current chart to form a base for this impulsive and positive move. Ethereum followed Bitcoin on the rebound and soared above €2,000 before the recent, most-anticipated update. The second-biggest cryptocurrency according to market cap gained around 50% from July 2021 and is potentially ready to gain more traction after the hard fork. Proposals are indeed huge improvements to the current status and are much needed in order to compete with younger smart contract networks such as Binance’s Smart Chain, Solana, Cardano and others. Ethereum had a massive head start over all its competition, but the younger chain mostly includes all the improvements already. The effect on price could be dramatic, perhaps, even similar to the Bitcoin Halving, which occurs every four years and has resulted in huge bull market cycles.

Read our article on what the ETH London fork could mean for you as a user here.

We’re pleased to announce that both Bitpanda Broker and Pro will be...