The ultimate timeline of the past Bitcoin Halvings

In the previous article of our Bitcoin Halving series, you read all about the five lessons learned from the Bitcoin Halvings. If you want the straightforward facts and information, we’ve got you covered! In this article, we’ve mapped the most important milestones in the history of Bitcoin for you.

11 years ago, the Bitcoin genesis block was created at exactly 18:15:05 UTC on the 3rd of January, 2009 and changed the course of history. The anonymous creator(s), going by the name “Satoshi Nakamoto”, had brought a vision to life by releasing the Bitcoin whitepaper about a year prior to the creation of the first block. The vision of making a decentralised payment system became a reality as he (or she, or they) created block zero, which would change the way we see money and the global economy forever.

The first payment with BTC

On the 22nd of May, 2010, a hungry man made history with what was considered the first real-world payment with Bitcoin, as a Bitcoin miner traded 10,000 BTC for two pizzas. Back in 2010, BTC didn’t really have a value, but as you can imagine, in today’s market, it is a huge amount of money and it is estimated that he spent about $800 million (USD) on those two pizzas! To this day, people around the world still celebrate the 22nd of May as the “Bitcoin Pizza Day”. By buying pizza with their Bitcoin, people remember the first ever BTC payment and the man who could have been a millionaire if only he chose to cook something instead.

On the 6th of November, 2010, we saw the Bitcoin market cap reach $1 million for the first time ever. The price per Bitcoin on Mt.Gox, being the most commonly used exchange platform at that time, was $0.50. Not long after this, in February 2011, Bitcoin went on to reach parity with the USD (1 BTC = 1 USD) and in June later that year, the price would reach its first all time high of $31.90. This was huge for the crypto community, as the price of Bitcoin had been sitting at less than $1 earlier that year!

Only four days after this price peak, we saw a crash in the price of Bitcoin as it slipped to $10. This incident would later on be named “The Great Bubble of 2011”. This fundamental shift in the Bitcoin economy brought media attention and wealthy wall street brokers to the crypto market as awareness spread. It would be the investors’ first experience with the dangers of Bitcoin’s famous volatility and the importance of understanding price stability.

On the 28th of November, 2012, the first official Bitcoin Halving decreased the block reward from 50 BTC to 25 BTC. One year before the halving, we had seen a definite spark in interest in Bitcoin as an upward trend started in November 2011. This has been historically known as the “pre-halving uptrend” and it has seemed to become a pattern observed before the last two Bitcoin Halvings. 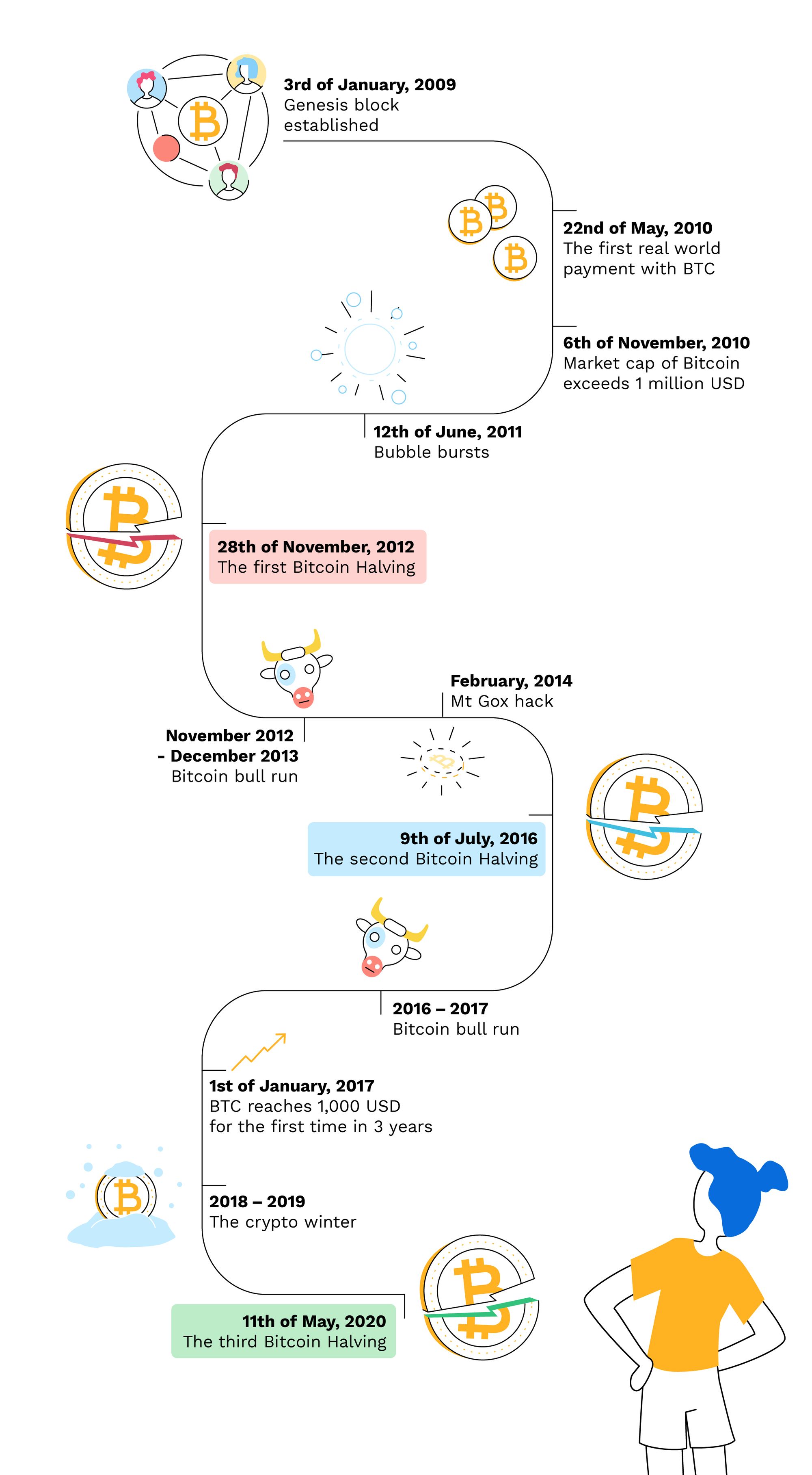 Spanning the period from November 2012 to November 2013, a year after the Bitcoin Halving, we saw Bitcoin break records! There was an increase of more than 8069% where the Bitcoin price reached around $1000 (USD). This was investors’ first real experience with a bullish market, or more commonly known as a “bull run” (this is when prices in the market are consecutively rising). However, what goes up must come down, and in December 2013, the Bitcoin price experienced a decline of over 80% with a multi-year “bear” market. This was a tough break for investors, who did not see a positive trend until two years later.

Mt. Gox was a popular Bitcoin exchange platform based in Japan that dealt with over 70% of all Bitcoin transactions worldwide at that time. Created in 2010, Mt. Gox had about four good years until February 2014, when it went completely bankrupt after what became known as the biggest hack in crypto history. All investors who had been using Mt. Gox to trade lost their assets, safe to say, no one was very happy at the outcome. The company lost approximately 740,000 BTC, which, at the time, was the equivalent of $3 billion USD and about 6% of all bitcoins in existence. This event has become somewhat of a cautionary tale for all investors, as it showed just how important it is that you know how you store your private keys.

The second Bitcoin Halving reduced the block reward even further from 25 BTC to 12.5 BTC on the 9th of July, 2016. Again, we saw a familiar upward trend a year before the halving in October 2015. This uptrend increased the Bitcoin price by about 112%, with the price slowly climbing back up to about $650 (USD) per Bitcoin. The daily issuance rate for BTC dropped from 3,600 BTC to 1,800 BTC (which is the current issuance in 2020).

BTC reaches 1,000 USD for the first time in three years

Following the Bitcoin Halving of 2016, where the price per BTC sat at $650 USD, on the 1st of January, 2017, Bitcoin skyrocketed and reached $1000 USD for the first time in three years. This caught more attention from media outlets and drew newcomers to the crypto market, which could be the reason for the popularity of our next bull run below.

This one started after the halving and brought a 284% increase in the price of BTC. This 2017 bull run is particularly famous, as it was this year where BTC broke records again and the price per BTC rose to $20,000 (USD) towards the end of the year. If Investors consider history an indicator, we can learn that there is a distinct pattern in the Bitcoin market from these findings.

From the year 2018 to 2019, we experienced what is called “the crypto winter”. As a consequence, the market suffered a loss of around 2000 digital assets during 2018 and during the first couple of months of 2019, Bitcoin stayed under the $4000 mark. This made investors believe that they were in for a long “crypto winter” in which the price would remain stagnant or even keep decreasing. This crypto winter could have also partially been a result of numerous scams which tarnished the reputation of cryptocurrency, leaving new investors unwilling to enter the crypto space.

The third Bitcoin halving is scheduled to take place around mid-May 2020. In this halving, the block reward will be reduced from 12.5 BTC to 6.25 BTC, meaning that miners receive 50% fewer rewards than before the halving. So what do we think will happen? Well, past halving events have positively affected the Bitcoin price in the past. However, history never repeats itself in the same way and we advise you to remember that Bitcoin is, and always will be, volatile and we should take these lessons from history with a grain of salt!

Like what you read? You can go back to the basics and take a look at our first instalment of the Bitcoin Halving series, what the Bitcoin halving means for beginners, or, head over to our platform to start trading Bitcoin and over 30 other digital assets!

RISK WARNING: The information contained in this article is for general purposes of information only and is not in any form an investment advice. Please note that cryptocurrency trading may involve a significant level of risk and is not suitable for inexperienced traders. For further information regarding the risk in connection with cryptocurrency please also refer to our terms and conditions (see 12. Risks).