TRON is a blockchain known for its speed, low transaction fees and its special focus on building a fully decentralised internet.

TRON is among the world’s largest blockchains, offering a platform known for its speed - it’s able to process 2,000 transactions per second - and low transaction fees. Founded in 2018 by Justin Sun, TRON’s philosophy is to decentralise the web, a mission they are pursuing by rapidly expanding the adoption of blockchain technology.

TRON’s ecosystem has unique characteristics, including a 3-layer architecture and a particular type of Delegated Proof of Stake, its Virtual Machine (TVM) and many other features that facilitate the creation of DeFi and DApps. TRON also has a cross-chain scaling solution project known as BTTC, which is based on BitTorrent. 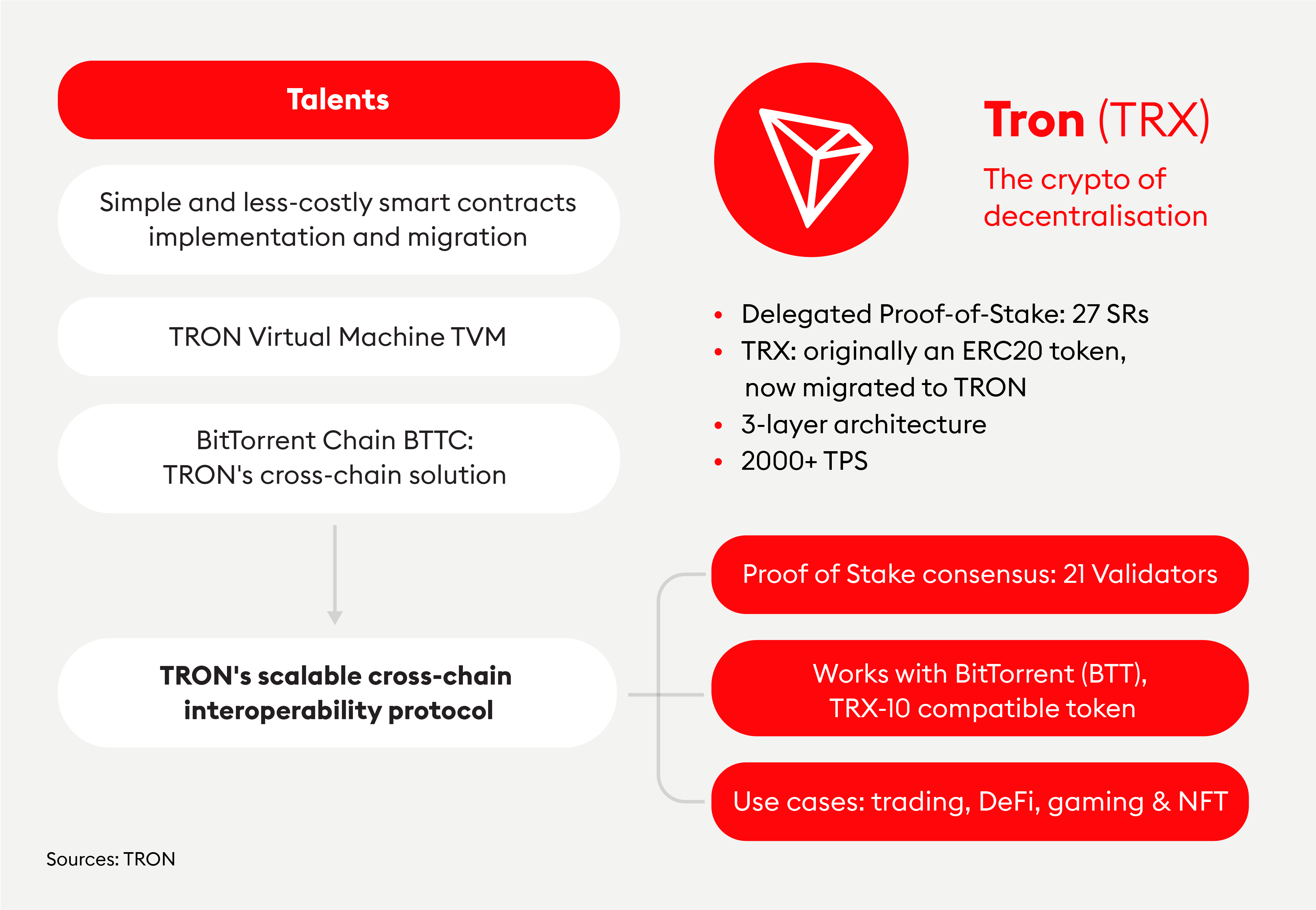 How does TRON work?

In the pursuit of fully decentralising the web, TRON has been trying to create a cost-effective environment for developers. That’s why the project has introduced the TRON Virtual Machine (TVM), a “lightweight, Turing-complete virtual machine developed for the TRON ecosystem.” TVM provides developers with an easy way to create and compile smart contracts using the same programming language used on Ethereum (Solidity), while maintaining relatively low prices.

In the Delegated Proof of Stake consensus algorithm adopted by TRON, 27 Super Representatives - SRs for short - are elected for block creation. The SR vote occurs every 6 hours. Users who freeze their accounts can vote for the SRs, and the first 27 are chosen as super representatives for block creation. Voters can choose the SRs according to multiple criteria: from the rewards each representative has in store for voters to the projects they are proposing to promote TRON. The votes that SRs receive allow them to create blocks, but does not come with any other special privileges. In this type of consensus algorithm, block rewards for the SRs are set annually at 336,384,000 TRX in total.

The rewards are sent to each SR after the block creation is finished via a sub-account (not directly in the SRs’ accounts) and they’re only able to actually withdraw the rewards once every 24 hours.

TRON’s 3-layer architecture is divided into the Application Layer, the Core Layer, and the Storage Layer: The Core Layer hosts many modules, including the consensus module, smart contracts and account management. The Application Layer involves the creation of DApps and wallets. The Storage Layer contains the Blockchain Storage and the State Storage, with the latter providing protection to the former by storing newly created forks and thereby increasing stability.

TRX is the native token of the TRON network. It started off as an ERC20 token based on the Ethereum blockchain, but it was later moved to the TRON network. TRX has a total circulation supply of just under 100 billion tokens and a market capitalisation of €5.84 billion.

Like other cryptocurrencies, TRX is a highly volatile asset and its price can fluctuate based on market conditions. Soon after its initial release in May 2018, the price of TRX hit its first and currently standing all time high of €0.18. The price peaked a couple of times later on, but has so far not reached its 2018 peak. The current daily trading high of TRX is €0.06444 and the daily low is €0.06281.

How to buy TRX?

You can buy TRON through cryptocurrency exchanges like Bitpanda using fiat currencies, e.g. euros or U.S. dollars, but it’s a good idea to first get familiar with the TRX price history and the current exchange rate. Once purchased, your TRON investment can be viewed and accessed in a digital wallet that acts similarly to a banking app. You then have the option to hold on to your TRON or sell it again via the exchange.

How to use TRON?

The TRON blockchain is a distributed operating system with DApp and smart contract support. It can therefore offer not just one, but multiple use-cases. These include:

Although the main use case of the TRX token is to keep the TRON network running - specifically as rewards for the super representatives who create new blocks - TRX has value as a digital currency and can therefore be bought, sold and traded on cryptocurrency exchanges. TRX can also be held in digital wallets as an investment.

As an Ethereum competitor, TRON wants to offer developers a steady platform where they can build and evolve their decentralised applications (DApps), with low costs and the ability to scale. In fact, transaction operations on TRON don’t take up any tokens. For developers who have already built their project on another platform like Ethereum, TRON is compatible with the Ethereum virtual machine and many others, so that smart contracts on those platforms can be executed on TRON as well.

Six months after TRON acquired BitTorrent in 2018, BitTorrent launched BTT, its own TRX10 compatible token. In late October 2021, TRON presented BTTC, the BitTorrent-Chain, a scalable cross-chain solution connecting the TRON mainnet with the Ethereum mainnet as well as other networks in the pipeline.

BTTC provides users with a simple all-in-one solution to develop and migrate DApps between networks. This cross-chain protocol adopts a Proof of Stake (PoS) consensus mechanism and has a fixed number of 21 validators. In order to participate in block creation, the 21 validators need to freeze an amount of BTT on TRON’s mainnet and will then receive block rewards as well as rewards for checkpoint submissions, which is a “snapshot of BitTorrent-Chain chain state”.

Investing carries risks. Make sure to conduct your own research before making any investment.

Is the future of work in the metaverse?

Ready for immersive virtual meetings and awkward conversations with...