We know how quickly market sentiment can change in the world of crypto, but last week and this week have already been extreme. No market can keep going up forever, especially not with the massive gains of the last six months.

We know how quickly market sentiment can change in the world of crypto, but last week and this week have already been extreme. No market can keep going up forever, especially not with the massive gains of the last six months. Bitcoin and the broader crypto market are in for a wild ride, as some assets are already down by 50% or more from local highs. The upwards run from the last six months just came to a stop, so it wouldn’t be surprising if the market moved sideways for a while before they find a new trend.

The massive sell off over the past week has seen the total crypto market cap lose about €700 billion within seven days. More than half of that decline happened in the last 24 hours, as several cryptos shed between 15 to 30% of their value. The total market cap is now €1.4 trillion, the lowest since March.

Bitcoin, the world’s largest cryptocurrency by volume and market cap, has dropped nearly 50% from its all-time-high in less than a month. It peaked around mid-April, when it was trading at €54,500, however, the price has now plummeted to below €30,000 for the first time since February. 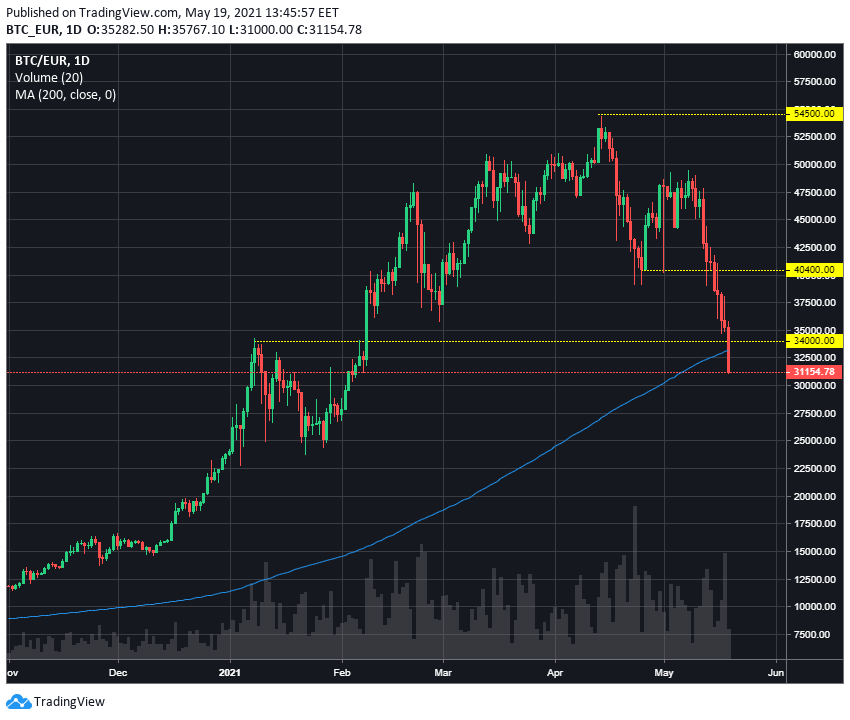 The only time Bitcoin lost as much as this during such a short time frame was in late 2017, when the BTC bull run came to a halt. It's hard to say what was the exact catalyst, but several factors can play a role in this sell-off. Tesla CEO, Elon Musk, was very active on his Twitter channel, which sparked the initial fire in the market followed by news about China banning further use cases of cryptocurrency commerce and a crazy run of meme tokens which dragged the liquidity to speculative investments. Perhaps, the market just needs to take a deep breath after a wild 6 month long ride.

Bitcoin is now trading on the 200-day moving average (MA) which is the most widely used indicator in trading, and it’s the first real support in a long term trend. The 200-day MA refers to 200 periods on the daily chart. This takes 200 trading days into consideration – which is a tonne of trading days and with that, makes it very important. When asset prices cross over the MA, it may generate a trading signal for technical traders: below the line = a sell signal, above the line = a buy signal.

The second-largest cryptocurrency, Ethereum, simply followed Bitcoin in the selloff, losing nearly 50% of its value. Ethereum topped at €3600 with a market cap of €410B before the price correction. The price of ETH seems to have lost ground, now trading just around €2,000, the lowest since April. 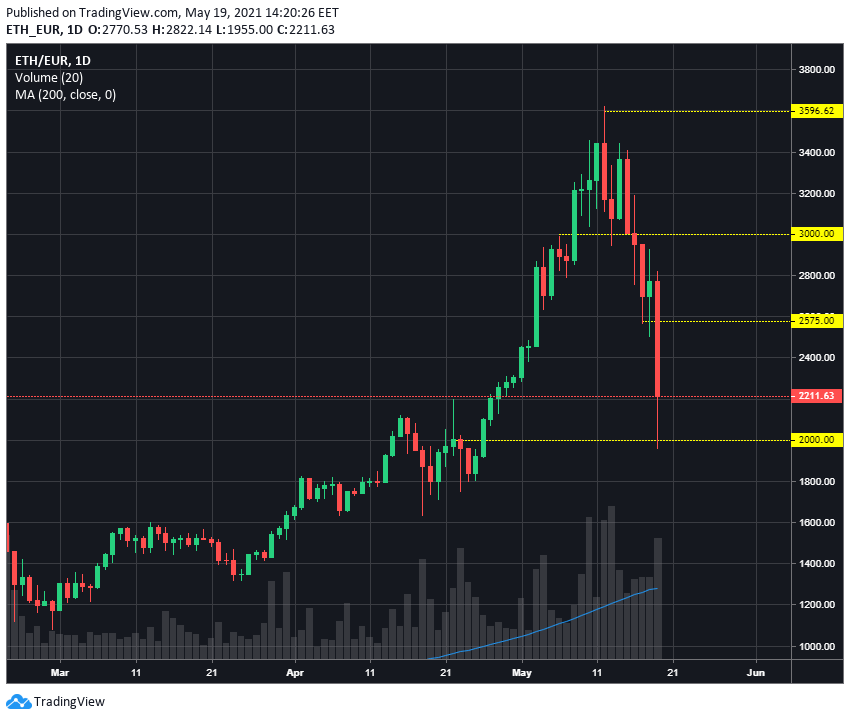 Other altcoins, particularly recent gainers and the ones with smaller market caps, took part in the massacre. XRP is down 40%, trading around the €1 mark, while LINK experienced an even greater loss from the top, losing more than 50% of its value. IOTA lost approximately the same value which also is trading around €1 right now. 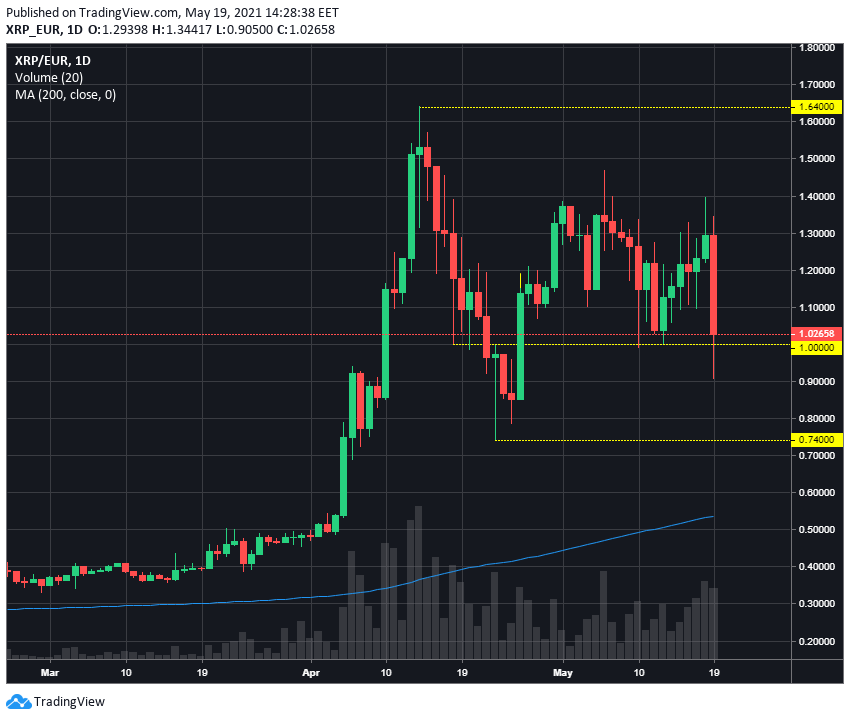 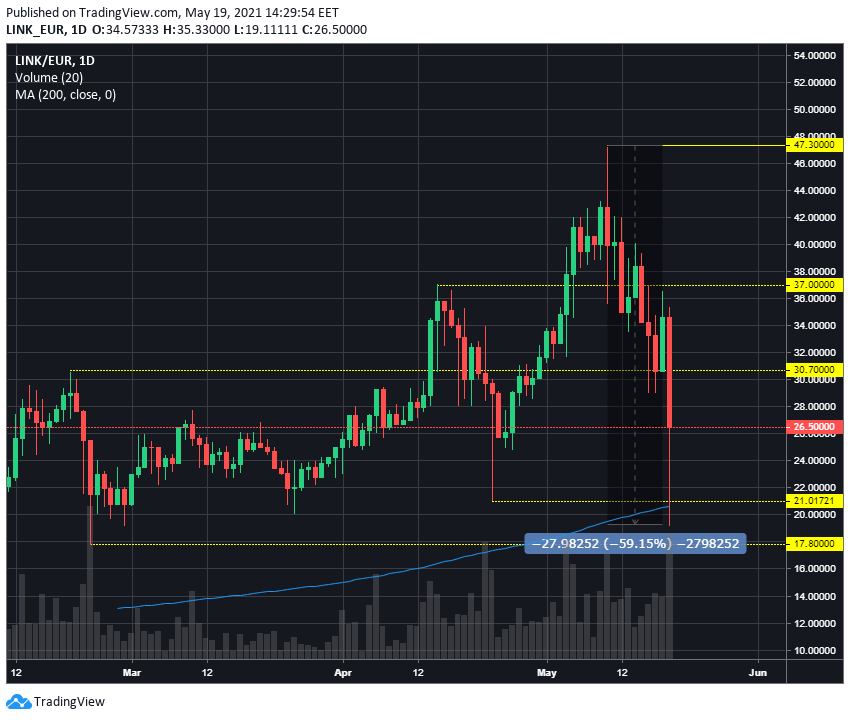 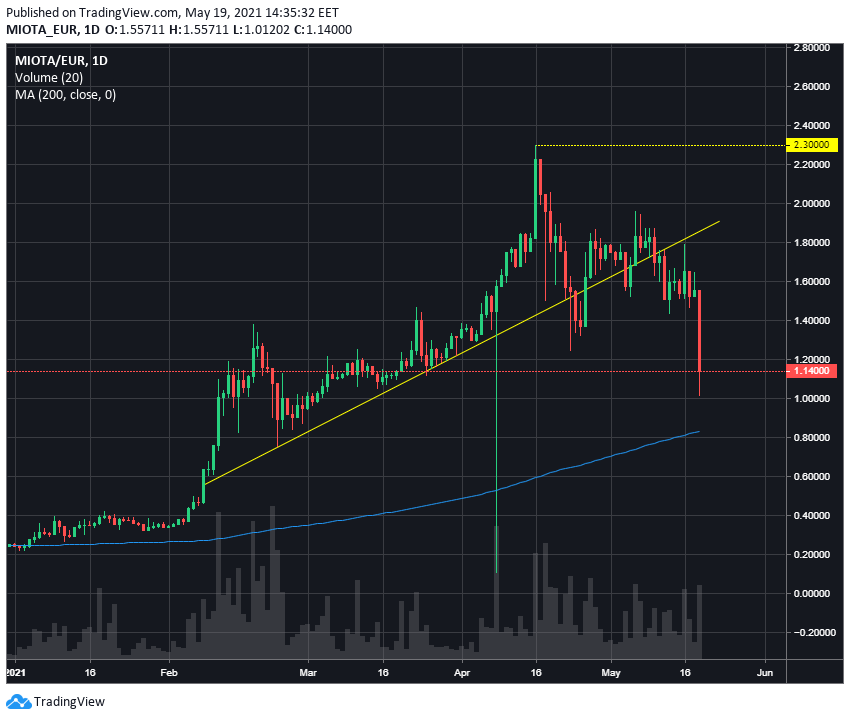 Market corrections are part of trading

Market corrections are part of trading and, while damaging in the short term, a correction can be healthy in the long run by adjusting overvalued asset prices and providing buying opportunities. No-one can pinpoint when a correction will start, end, or tell how drastic a drop prices will suffer until it's over. The crypto market is still maturing with greater price volatility, and with that in mind, a correction will most likely be part of the cycle also in the future.