The week everybody would like to forget. Close to €300 billion have been wiped off the total market cap of all cryptocurrencies in just under 24 hours. The sell-off of cryptocurrencies resumed over the weekend, with major coins plunging from 50% to 80% on a weekly level.

-Can Bitcoin be considered a store of value?

-Altcoins back on track

-Google search queries for “cryptocurrency” on the rise

The past week will long be known as the week everybody would like to forget. The largest single-day drop of the whole crypto market created the greatest red candle in history which went on to create the largest weekly drop ever seen on the crypto market. Close to €300 billion have been wiped off the total market cap of all cryptocurrencies in just under 24 hours, with many major-cap tokens shedding around 40% on that day. The sell-off of cryptocurrencies resumed over the weekend, with major coins plunging from 50% to 80% on a weekly level.

Multiple factors were at play for such a sharp retreat, ranging from criticism of the environmental impact of Bitcoin’s energy usage by Elon Musk, to the risk of a regulatory squeeze. The news that mines in China were shut down and that profit taking is ongoing as a result of massive gains in the last six months might have contributed to the plunge too. Most of the volatility can be attributed to overextended leveraged speculators who got liquidated and caused a cascading trigger of drops which extended the panic selling. The sell-off of Bitcoin translated even more to other tokens, mostly altcoins with lower market caps and liquidity, causing extremely high volatility.

Can Bitcoin be considered a store of value?

Bitcoin had a massive correction in the last few days, plummeting 50% from an all-time high and dragging down some altcoins by 70% from recent highs. Last week’s price decline was “one for the books” – BTC suffered the biggest drop in history, printing the biggest red candle up to date. 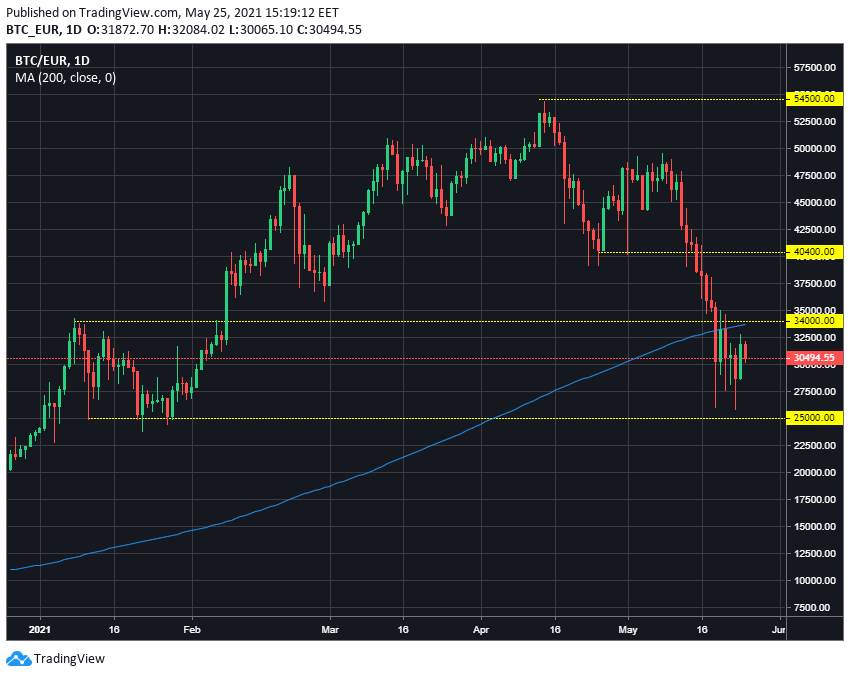 After events like this, one might ask, can Bitcoin be considered a “store of value” if it drops 50% in a very short period? The race for status of dominant long-term store of value is still ongoing. Gold, art, diamonds, wine, and collectibles all have value and use beyond being stores of value. Real use is important, because it smoothes out the volatility of the price, as real demand tends to absorb fluctuations in investment demand. It also means that the asset is unlikely to go to zero. While Bitcoin benefits from greater liquidity, it currently suffers from its lacklustre real use cases. High energy consumption also makes Bitcoin vulnerable to a declining demand as a store of value in comparison to other, better designed cryptocurrencies. BTC is losing dominance, currently holding a share of 40% – the lowest since June 2018, and down from being up by 72% in the beginning of the year. The lowest dominance ever recorded was in January 2018, when Bitcoin reigned over just 35% of the market share. Bitcoin is trying to find its sweet spot in the market and is competing with altcoins. For now, it may be too early to compete with gold for safe haven demand, but the two can coexist, and it will be exciting to see what the future holds.

The ETH price and trading volume are surging, as the second biggest cryptocurrency is closing the gap to BTC in terms of market cap. The total value of Ethereum is now at about €335 billion, while Bitcoin’s market cap stands at €620 billion. Ethereum experienced an even greater correction than Bitcoin, dropping from €3,600 to €1,400, which is the lowest since the beginning of April. At the time of writing, it's trading again above €2,300, which means it’s up by 300% year-to-date (YTD). 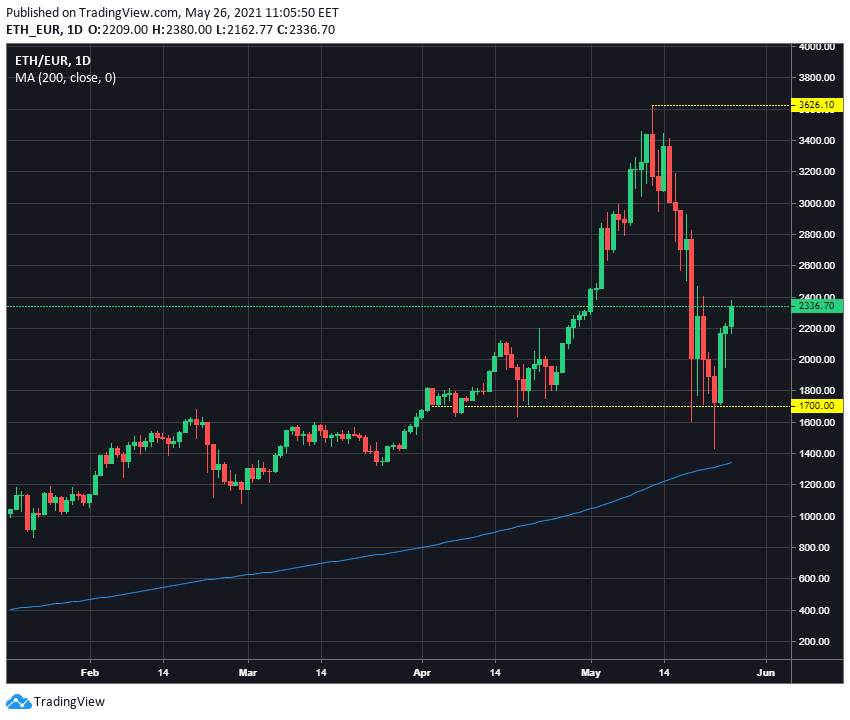 Altcoins back on track

The majority of altcoins saw their prices bounce back following last week's correction. LINK was one of the best performing altcoins in the recent rebound. It has regained more than half of its value. It is now trading above €25 and trying to find support for its next move. 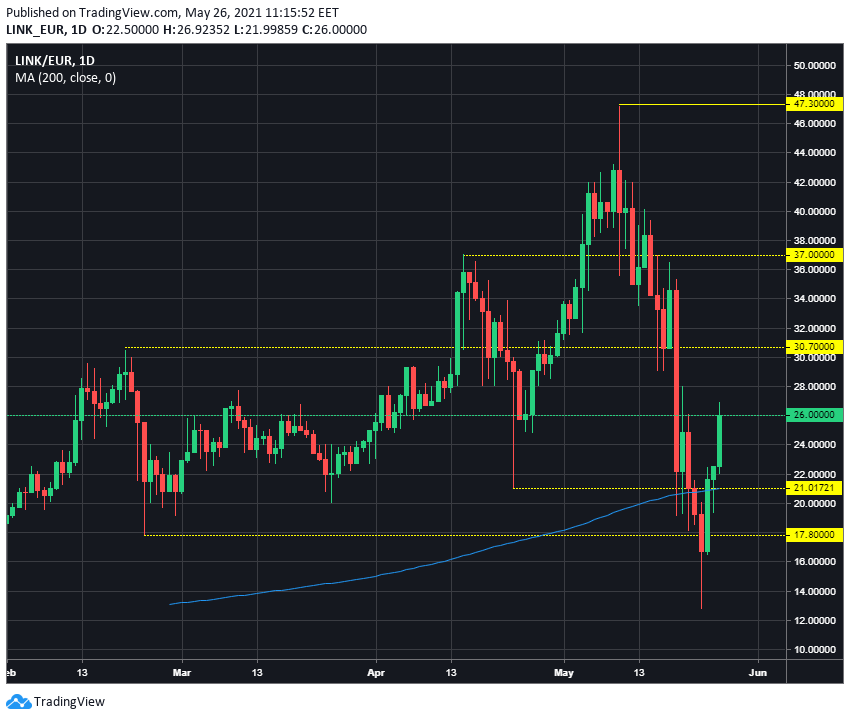 DOGE dropped by 70% from its all-time high and found support at €0.2, which is the lowest since April. After a strong rebound in the last 24 hours, it’s now trading at €0.3. Despite the drop, it's still one of the best performing assets year-to-date among all cryptocurrencies. 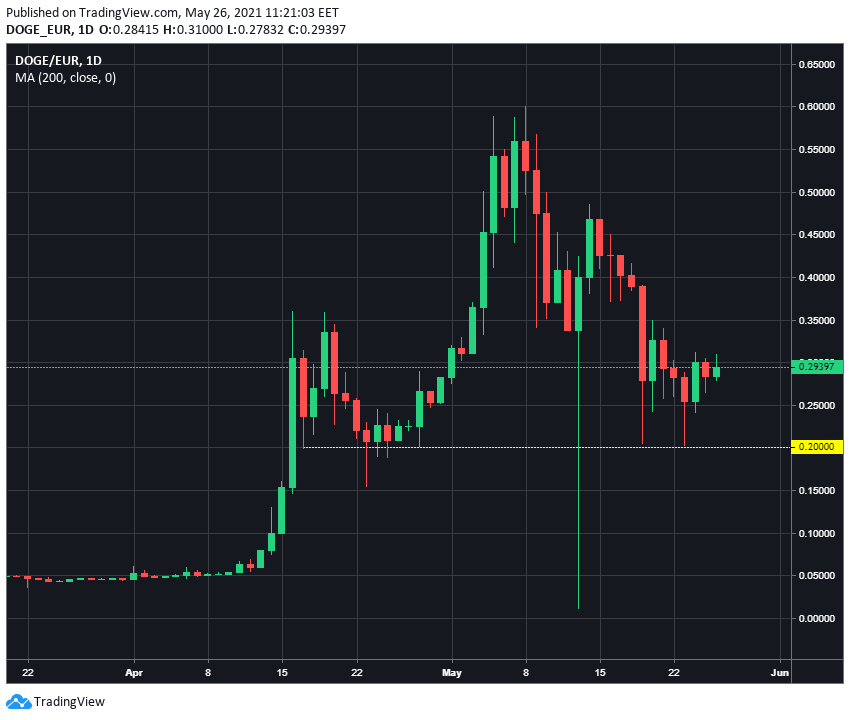 Lower market cap tokens with lower trading volume experienced extreme price corrections – something that also happened to IOTA. The price fell by more than 70% from its all-time high and found support on its February low at €0.75. This support turned out to be strong, which made buyers take back control, pushing the price back above the 200 moving average. 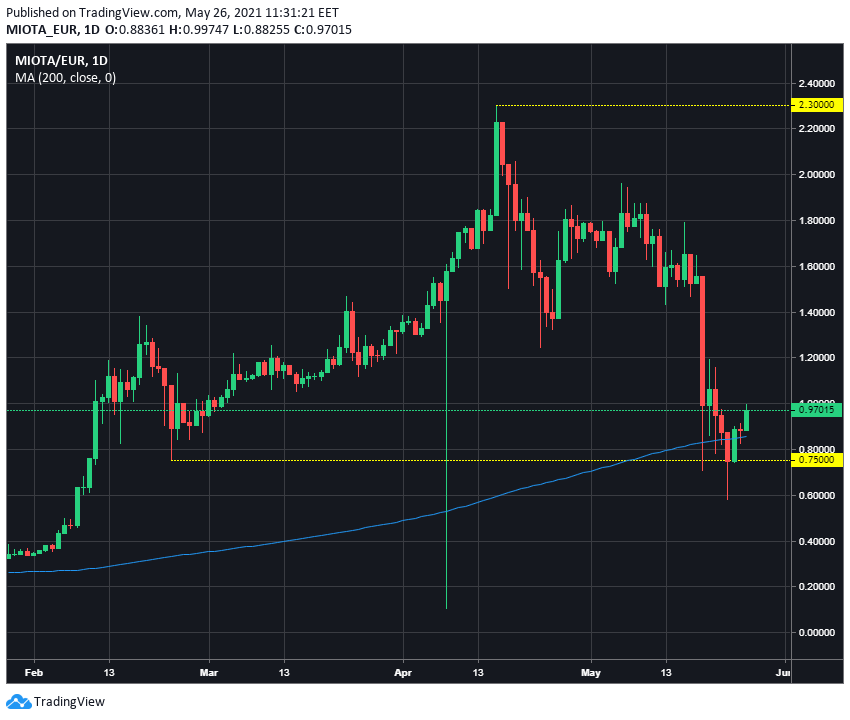 Google search queries for “cryptocurrency” on the rise

It looks like we’re in for a choppy end of May, as bulls battle bears. It's completely normal after such a  huge correction. The market needs some time to find new support levels and attract more buyers. We are at the end of May, and the wild ride with massive gains seems to be behind us.