Bitcoin’s monthly candle was its second biggest red candle ever as it tanked 40% from the beginning of May while Ethereum closed the gap.

-   Historic times for the crypto market

-   Ethereum closing the gap behind Bitcoin

Historic times for the crypto market

The old traders quote “Sell in May and go away” was indeed in place last month, as the cryptocurrency markets experienced one of their worst monthly performances in history. Bitcoin’s monthly candle was its second biggest red candle ever as it tanked 40% from the beginning of May. By comparison, May tends to be a very profitable month for BTC — in 2017 and 2019, for instance, it gained more than 50%. History was written in many aspects; the largest single-day drop in the crypto market created the largest red candle in history which continued throughout the whole week and created the largest weekly drop ever seen on the crypto market. Overextended, leveraged speculators only added fuel to the fire with liquidations which caused a cascading trigger of drops.

The market bottomed out last week and tried to find new support levels. A ranging market is very common after huge corrections and it can take several weeks before it eventually finds a bottom and makes the next move. Consolidation is a technical analysis term used to describe a price movement within a given support and resistance range for a period of time. It is usually caused as a result of trader indecisiveness. In times like this, investors should focus more on strong fundamental factors like project longevity instead of jumping on every short-term price movement.

Bitcoin started to show some positive movement on the daily chart while the weekly chart began to show signs of a slowdown. A ranging market also supports major altcoins, which are showing signs of recovery. Bitcoin is still notoriously volatile but prices still remain up by more than 25% for the year, despite the recent meltdown. However, the biggest monthly drop recorded was back in September 2011, when Bitcoin lost just slightly more value than now. Back then, Bitcoin hit a low of just under €2, which is hard to imagine with prices we are seeing now. 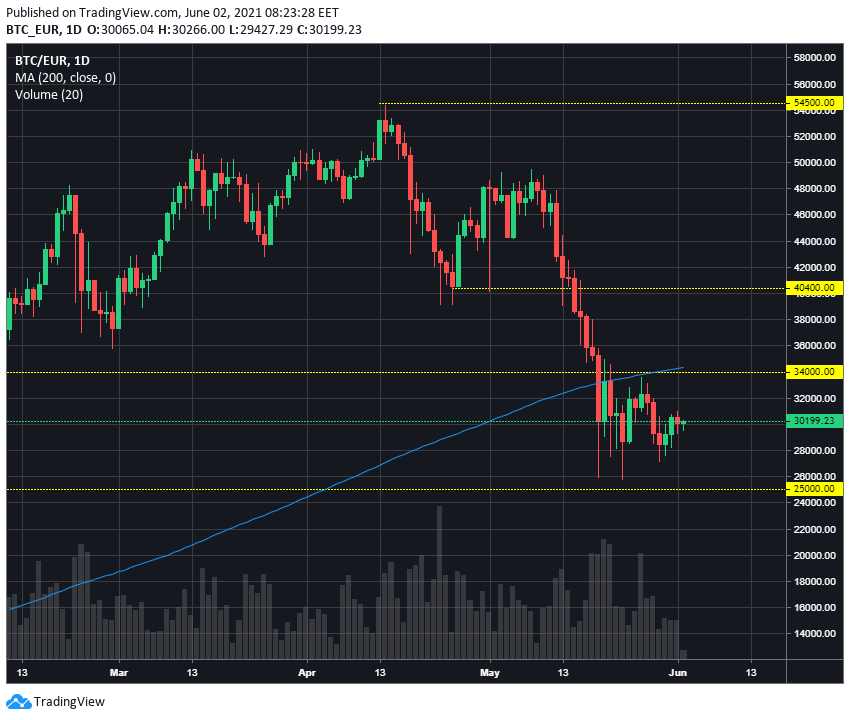 This indicator, which showcases the emotional side of crypto market behaviour, is the measurement of the Crypto Fear & Greed Index which has fallen to 23. On a scale of 1-100 where lower scores are associated with “extreme fear”, while top numbers represent “extreme greed”. The index tries to quantify the strength of the overall sentiment regarding cryptocurrencies by using different sources and transforming those figures into one number. This could be a sign of a market bottom, as extreme fear signifies that investors are very worried, which could be a buying opportunity, while extreme greed means the market is due for a correction. The index peaked in May at 73, a week before the drop.

Ethereum closing the gap behind Bitcoin

Ethereum followed Bitcoin in terms of price action but was acting in a more resilient way than its “big brother”. The price and trading volume of ETH are surging higher as the second largest cryptocurrency keeps closing the gap behind BTC in terms of market cap metrics. The total value of Ethereum is about €230b,, while Bitcoin’s market value now stands at around €540b. 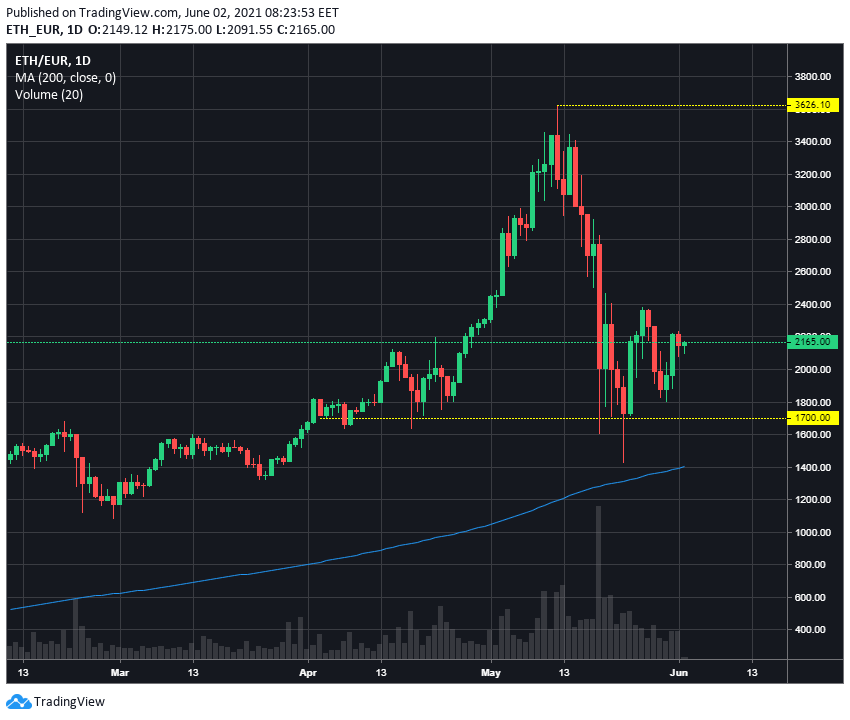 Ethereum’s value is hovering at around €2,000, 42% lower from its peak, but still up by 250% for the year to date (YTD). Ether is more volatile than Bitcoin, as it has a smaller market cap and is less institutionalised, but this could change in future as it grows in adoption.

XRP, the native token of the Ripple network, has been caught in a high-stakes legal battle with the Securities and Exchange Commission (SEC) since last year. The SEC charged Ripple co-founders, Chris Larsen and Brad Garlinghouse, with conducting an illegal security offering that allegedly raised more than €1b through sales of XRP. The case is slowly progressing as the two parties are meeting regularly in court. Ripple is defending very well, which can be seen through the token price as it holds very well throughout turbulent moments. Aside from the case result, which will inevitably influence the price of the token for better or worse, it’s worth mentioning that XRP is one of the rare major altcoins that still did not reach its 2017-2018 all-time-high. Currently, XRP is trying to get back to €1. Despite recent price corrections, XRP is still up more than 300% for the year to date, which makes it one of the best-performing assets over the past year. 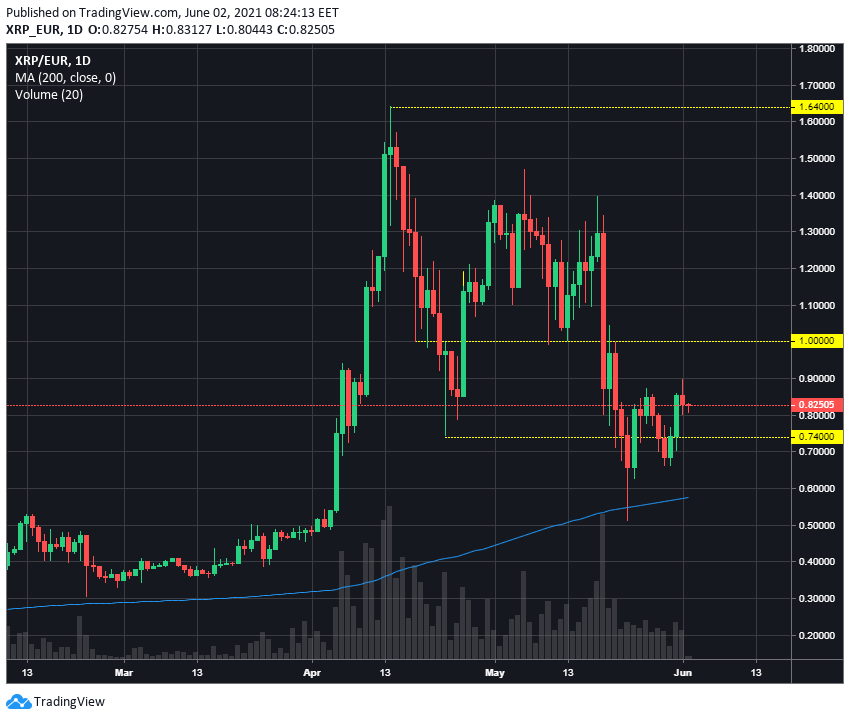