The volatility in the crypto market is showing no signs of stopping. The week was mostly coloured red across the board as China’s bitcoin crackdown intensified over the weekend.

Highlights of this week:

The volatility in the crypto market is showing no signs of stopping. Since the start of June, the total market cap has dipped from a little over €1.3 trillion to around €1.1 trillion, showcasing a loss of over 15%. The week was mostly coloured red across the board as China’s bitcoin crackdown intensified over the weekend, with authorities in the hydropower-rich Sichuan province ordering crypto miners to shut down operations. The Sichuan southwest province hosts China's second-largest mining community. According to reports, more than 90% of China’s bitcoin mining capacity is estimated to be closed. It is thought that between 65% to 75% of all global bitcoin mining takes place in China. Though it may not be good news for bitcoin miners in China, others could stand to benefit. China miners have already started to move their machines to other parts of the world to continue with their operations. Chinese bitcoin mining firm BIT Mining delivered 320 machines to Kazakhstan after being forced by the state energy regulator to shut down its centre in Sichuan, while some other company reported airlifting 3 tons of mining machines to Maryland, USA.

The total hash rate, or processing power of the bitcoin network, has gone down sharply in the wake of Beijing’s crackdown. In the last month, the hash rate dropped from a record 180.7 million terahashes per second to around 116.2 million as of Wednesday.

Bitcoin’s price stayed range-bound in a falling wedge formation with a low of €24.000. It's currently trading on a lower support zone, 50% down from April high at €54.500, but still up some 15 per cent from the beginning of the year. 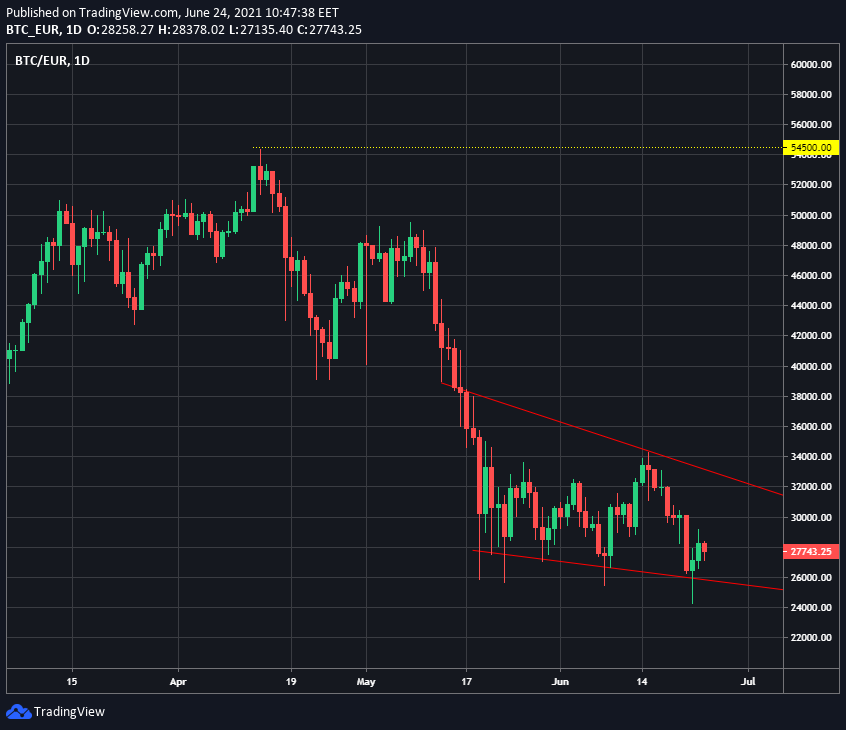 Even though the market turned bearish last month, on-chain data shows that bigger Bitcoin holders were not selling during the recent selloff, but were net buyers. Most major and institutional investors didn't sell when the market fell and some major companies, including MicroStrategy, bought the dip to increase their holdings.

The Bitcoin long-term net holder position shows that investors began to increase their activity in May as the price fell to €25.000 from €33.000. The millionaire addresses are at a seven-week high for the number of Bitcoin held, with the addresses representing more than 9.11 million BTC — down just a couple of per cent from their mid-April high.

A popular metric for measuring market sentiment, the Crypto Fear & Greed index, fell to an all-time low this week. Since the Bitcoin crash in the middle of May, which crashed the whole crypto market, the Index has been heavily leaning to the downside, indicating fear on the market. In the middle of the week, the Fear & Greed Index has hit 10 which represents extreme fear in the market. The crypto market behaviour is very emotional. People tend to get greedy when the market is rising which results in FOMO (fear of missing out). On the other hand, people often sell their coins when seeing red numbers. The meter is a scale of 0-100, where 0 represents extreme fear, and 100 represents extreme greed.

Historical data suggests that during periods of extreme market turbulence, most altcoins tend to closely follow Bitcoin’s price movements, as they are deeply correlated. Ethereum’s correlation with Bitcoin saw a drop in early May to the sub 0.6 levels due to the price movements Ethereum made during that time. The one-month correlation was between 0.7 and 0.8 in April before dropping to 0.5–0.6 in early May, but it rebounded drastically to 0.9 in early June, and has been holding high levels ever since. 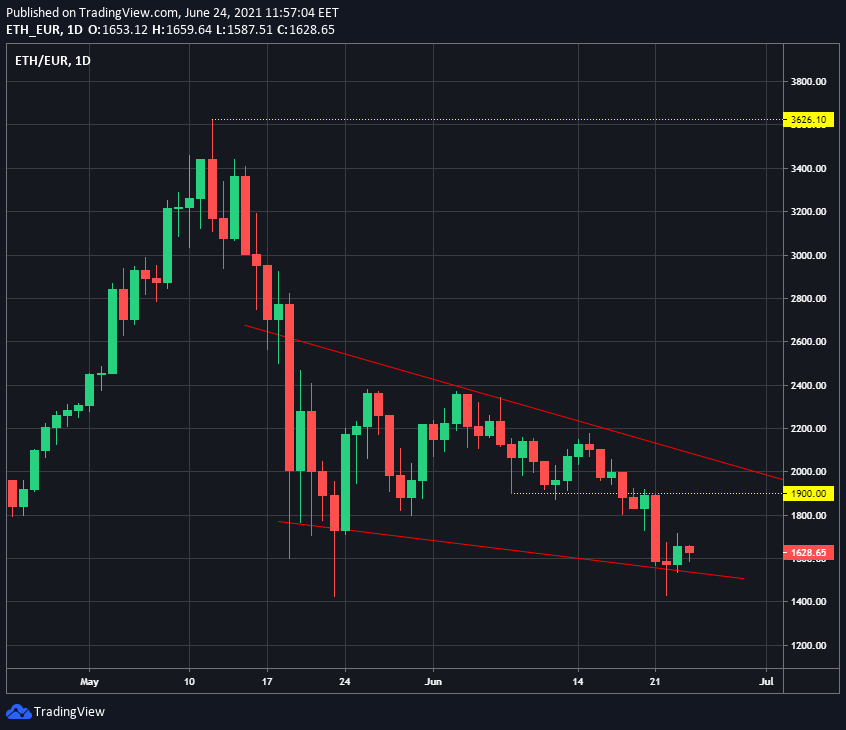 The price of ETH is moving on lower support of a falling wedge, simply following Bitcoin price. Any reaction from the “big brother” will move the price of Ethereum as well. Despite the drop from an all-time high reached in May, ETH is still up some 160% from the beginning of the year.