The cryptocurrency market was volatile and choppy over the last week but the overall sentiment was improving. Bears are slowly disappearing from the market while the bulls are getting stronger.

-The market is in a recovery process

-Bitcoin is in a ranging market

The market is in a recovery process

The cryptocurrency market was volatile and choppy over the last week, but the overall sentiment was improving. Bears are slowly disappearing from the market while the bulls are getting stronger. The Crypto Fear & Greed Index rose to 28 from 10 the week before, which is also a sign that trading is getting back to normal and that the worst might even be behind us. Market recovery after a sharp fall is a process, not a one-time event, and can therefore take several weeks to build a foundation for moving bullishly. A sign of the market recovery process was also seen when the crypto markets did not react negatively to the news that the United Kingdom’s Financial Conduct Authority banned Binance from undertaking any regulated crypto activity in the UK. Also, negative news from China was received very well and is, by now, mostly calculated in the prices.

Bitcoin is in a ranging market

Bitcoin is down by about 40% from April, on track for the largest two-month price drop since November 2018. The previous bear market in 2018 reached a drawdown of 80% and took about two years to fully recover. Bitcoin has been trading in a ranging market for the last few weeks as bears and bulls fight over taking control. BTC’s consolidation could continue for some more time until a decisive move takes place. 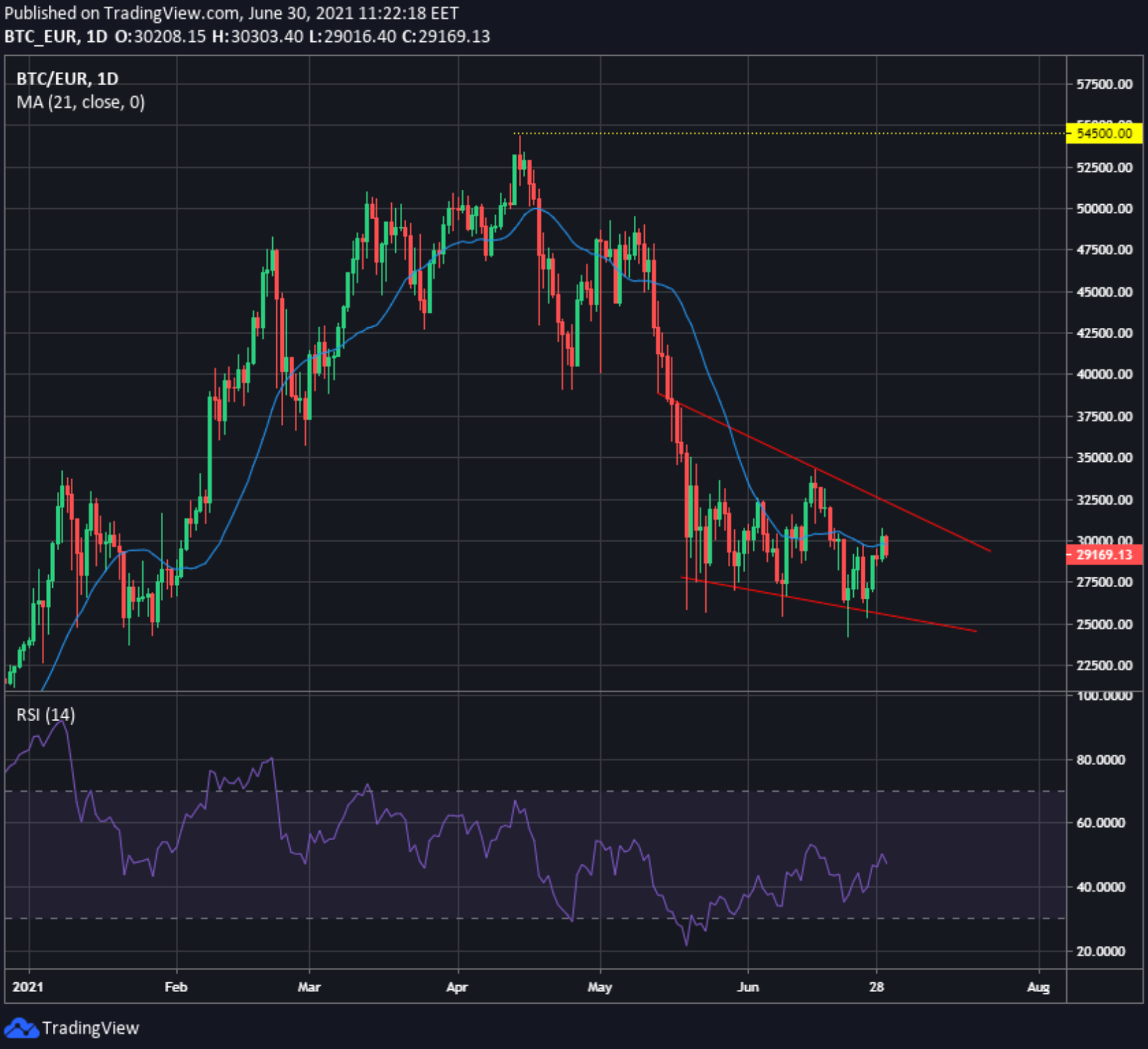 On the intraday chart, Bitcoin has seen some choppy and bouncy movement inside a falling wedge pattern. A bullish close above the resistance level will form a higher high in the lower time frame chart structure, which is a bullish sign for the BTC price, while a close below the resistance level will form a new low, and potentially some more downwards pressure. Bitcoin is leading the market and its correlation with altcoins is very strong.

The net outflow from cryptocurrency funds totalled €36 million last week, the largest on record since 2015. The movement signals a reversal from the trend in 2021, as Ethereum-tracking financial products have seen a net of €420 million inflow year-to-date. An outflow is a negative sign, but it might be only temporary, as investors were selling to move their funds to safety during the big fall in May.

Ethereum transaction fees have dropped to their lowest since December because blockchain activity has cooled down a bit recently. As of the 27th of June, the average transaction fee on the Ethereum blockchain was around €3.7 per transaction which is down from fee levels above €50 in mid-May. 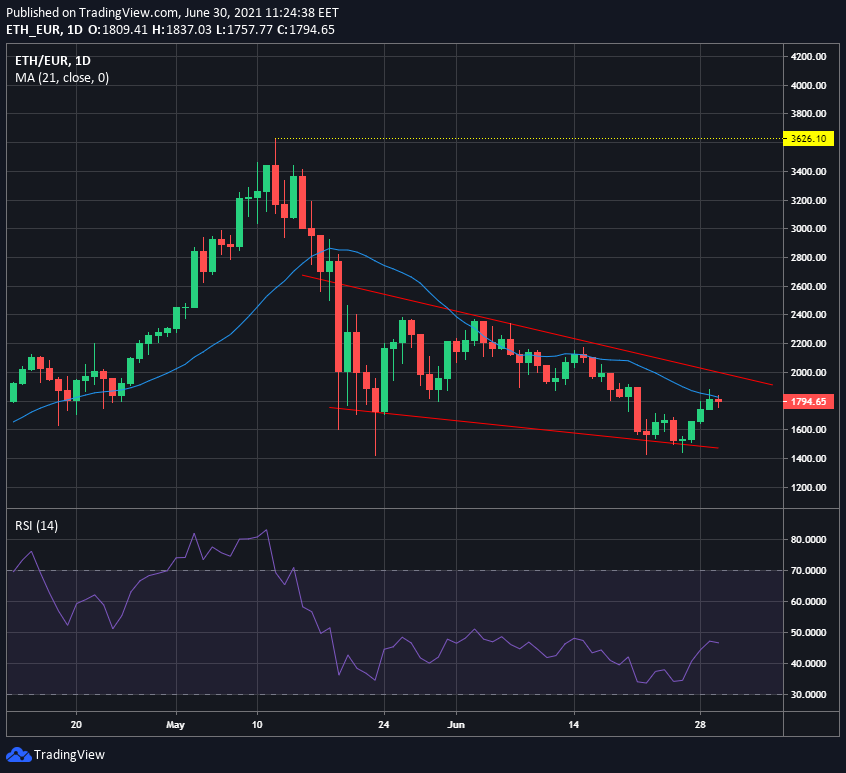 Ethereum is following Bitcoin and moving inside a falling wedge pattern. A breakout above this would push the price higher. While ETH is down some 50% from its all-time-high, it is still up by 200% from the beginning of the year and is moving bullishly according to higher time frame chart structures. At the time of the writing, it is trading at around €1,700.

Altcoins are looking to capitalise on Bitcoin’s range-bound trading. As Bitcoin’s price is searching for support, some altcoins are moving bullishly.

Despite mid-May’s broader market crypto correction, BEST is still up by around 1,000% year-to-date. It is currently trading at levels from February, the price similar to the one before the extended rally to an all-time-high. This means BEST is trading just under €1 where it found some support. 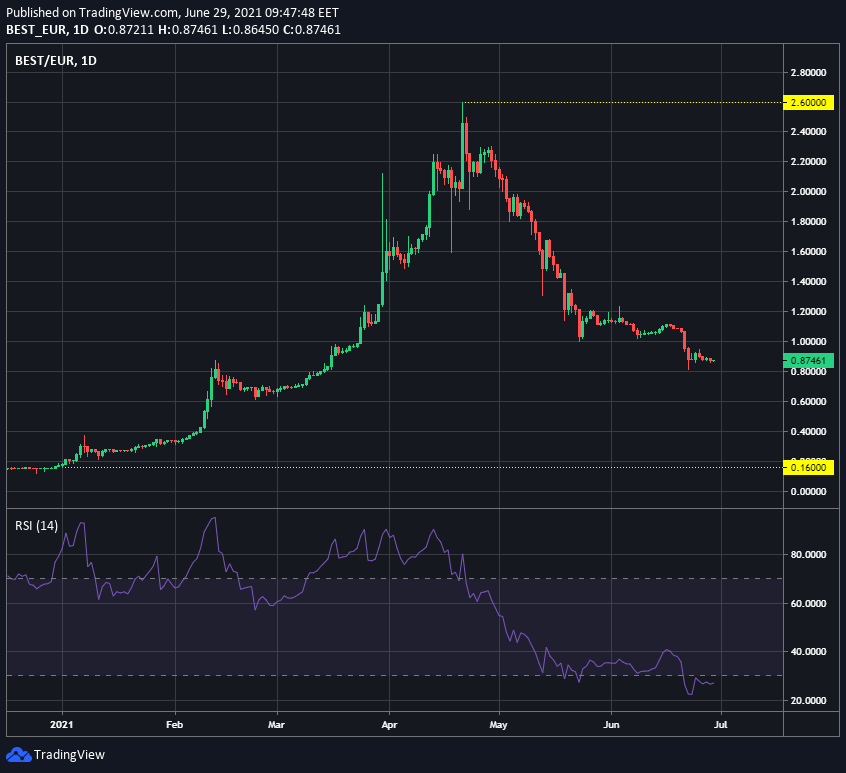 Pantos (PAN) is one of the best-performing assets this year, currently trading around €0.10, while it started the year at €0.03. As PAN is still one of the early-stage projects, its price is more volatile and is moving in big swings.

Cardano (ADA) has successfully broken out from the descending trend line on a lower time frame chart and has managed to get over a 21-day EMA (Exponential Moving Average). The EMA is flattening and the RSI (Relative Strength Index) is above 50, suggesting the bulls are trying to take back control. RSI is a momentum indicator used in technical analysis that measures the magnitude of price changes to evaluate overbought or oversold conditions. You can also add this indicator to your Bitpanda Pro chart. Cardano (ADA) is still one of the best crypto assets this year, currently trading around €1.12, while trading at €0.14 in the beginning of the year.

Some positive divergence can also be seen on the RSI of the Litecoin chart. The pattern suggests that the bears may be losing their grip while the bulls are gaining strength. Litecoin is highly dependent on the Bitcoin movement and as soon as the “big brother” finds support, LTC tends to follow. 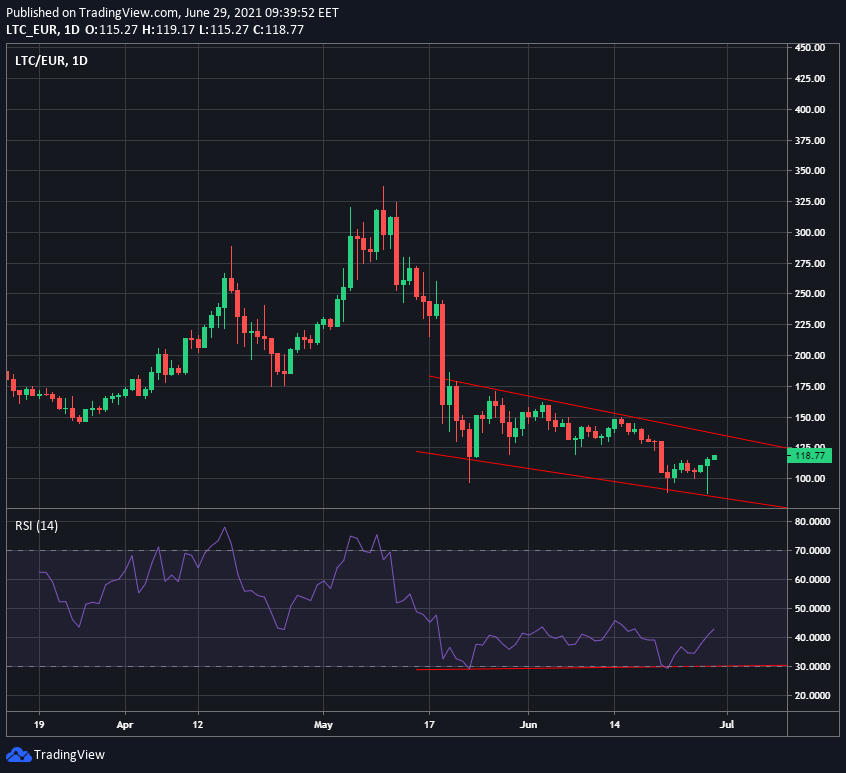 Polkadot is stuck in a tight range between €12 and €14. A break above this would be the first indication that the correction may be over. On the contrary, if the price turns down from the current level and breaks below, it could signal the start of the next leg of the downtrend. 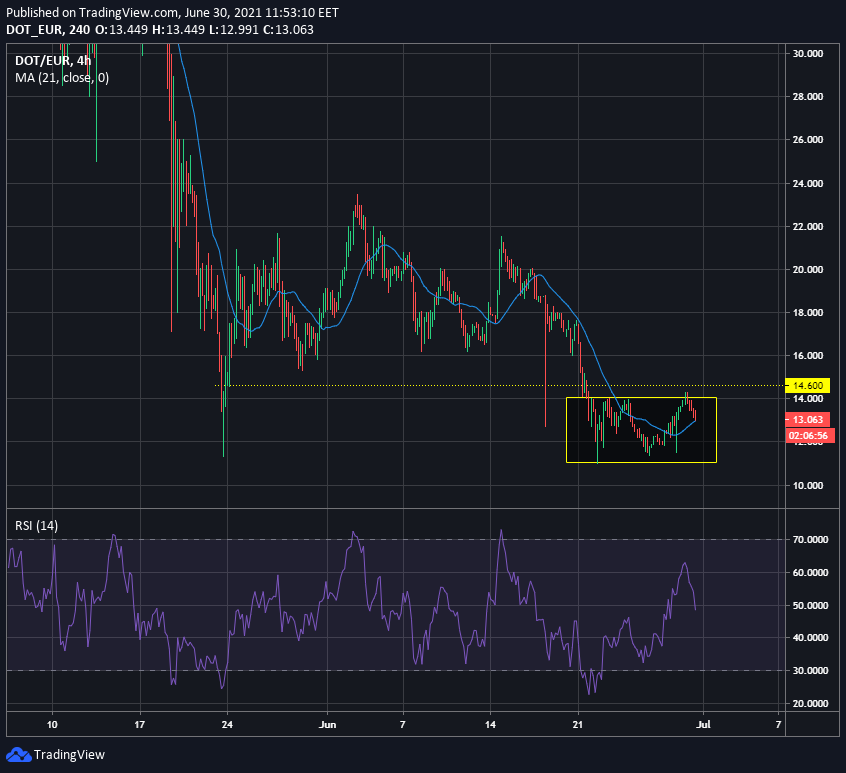