After some weeks of volatile trading within a narrow range, the market was green across the board last week. The weekend rally in cryptocurrencies was led by Bitcoin, even though the move was not supported by huge trading volumes.

-       Most altcoins are following Bitcoin's volatility

After some weeks of volatile trading in a narrow range, the market was green across the board last week. The weekend rally in cryptocurrencies was led by Bitcoin, even though the move was not supported by huge trading volumes. Altcoins continue to move higher as the balance in the market shifted in favour of the bulls. Major coins were up by 5-10% in the last seven days as optimism returned. The Crypto Fear and Greed Index rose to 29 on the 5th of July, the highest level in about three weeks. The Index hit a bottom of 10 in the last week of June, its lowest since March last year.

Bitcoin has successfully held the support level of €25,000 for two weeks now, which suggests that accumulation is taking place. The price is moving inside of a falling wedge pattern which started to form in the middle of June. The falling wedge pattern is a bullish one, but the price needs to break its upper trendline to perform positively going forward. The range trading is helping altcoins gain volume which can also be seen from Bitcoin’s dominance as it dropped to 44% from 50%, where it stood a week ago. 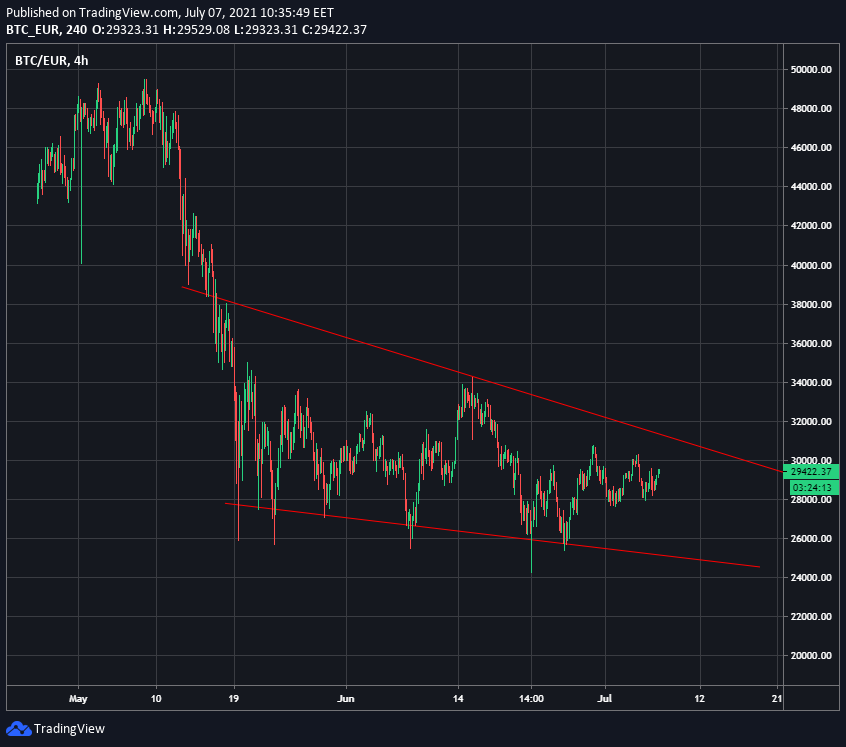 Bitcoin is trading in a narrow range

A wedge pattern can signal either bullish or bearish price reversals. In either case, this pattern holds three common characteristics: first, the converging trend lines; second, a pattern of declining volume as the price progresses through the pattern and third, a breakout from one of the trend lines. The two forms of the wedge pattern are either a rising wedge (which signals a bearish reversal) or a falling wedge (which signals a bullish reversal). When a price has been falling over time, a wedge pattern can occur just as the trend makes its final downward move. The trend lines that are drawn above the highs and below the lows on the price chart pattern can converge as the price-slide loses momentum and buyers step in to slow the rate of decline. Before the lines converge, the price may break out above the upper trend line.

The number of bitcoins being held by whales, those holding between 1,000 BTC and 10,000 BTC, has risen to 4.216M BTC. This figure is the highest that has been seen since May. Renewed accumulation by whales is good news for the market as wealthy investors are mostly long-term holders, rather than being traders who are taking short-term positions on the market. Whales became sellers shortly after the new all-time-high was reached, as their Bitcoin stash dropped by 8% to 4.17M BTC by early May.

Roughly 72% of Cardano’s circulating supply - around €25B - is staked, making it the most-staked asset among major cryptocurrencies. Currently trading at around €1.21, ADA is the fifth-largest cryptocurrency in terms of market cap. Despite the broader market crypto correction in mid-May, ADA is still one of the best-performing assets this year as investors remain bullish in anticipation of the full implementation of smart contracts later this summer. ADA rose some 750% from the beginning of the year. 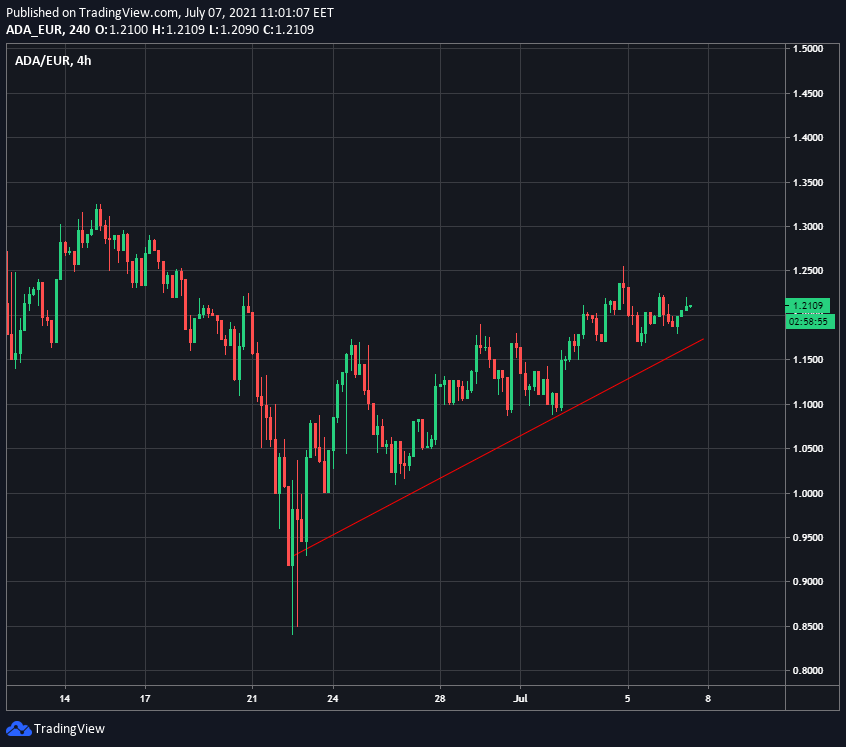 The latest in a series of good news concerning Cardano comes from Grayscale, which added ADA to its Digital Large Cap Fund. Grayscale sold some existing constituents of the fund and used the proceeds to purchase ADA. Grayscale is the largest holder of digital assets in the world, currently managing around €33B worth of digital assets.

The second-largest cryptocurrency in terms of market cap peaked over €2,000, its highest since the 18th of June. Bitcoin’s price stability and the anticipation of major protocol upgrades are fuelling investors' appetite for ETH. The launch of the new, more energy-efficient Ethereum 2.0 network will popularise the proof of stake consensus algorithm and make staking yields a more attractive source of income for both institutional and retail investors. 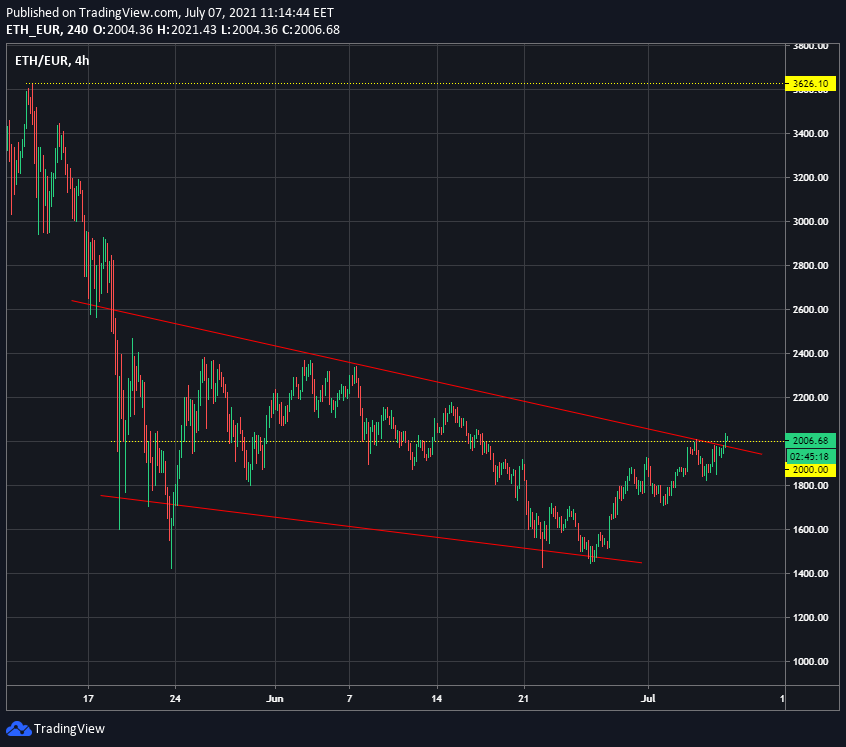 Just like its “big brother” Bitcoin, Ethereum is also moving inside a falling wedge formation. Any breakout will indicate the next move for ETH as the battle between bulls and bears intensifies around the resistance lines. Ethereum’s London hard fork, which contains the highly anticipated EIP 1559, launched on the Ropsten test net on the 24th of June, setting the stage for full main net implementation later in July. The hard fork is anticipated to have a positive impact on ETH’s value as investors will probably increase their exposure to ETH leading into the hard fork. On-chain data suggests that this is already happening as Ethereum registered over 750,000 active addresses in a week.

Most altcoins are following Bitcoin's volatility

LINK’s price increased by almost 20% in the last 7 days as bulls took control across the board. Price broke the upper resistance line of the ascending triangle on the lower time frame chart which pushed the price higher. Ascending triangles are considered a continuation pattern, as the price will typically break out of the triangle in the price direction prevailing before the triangle. 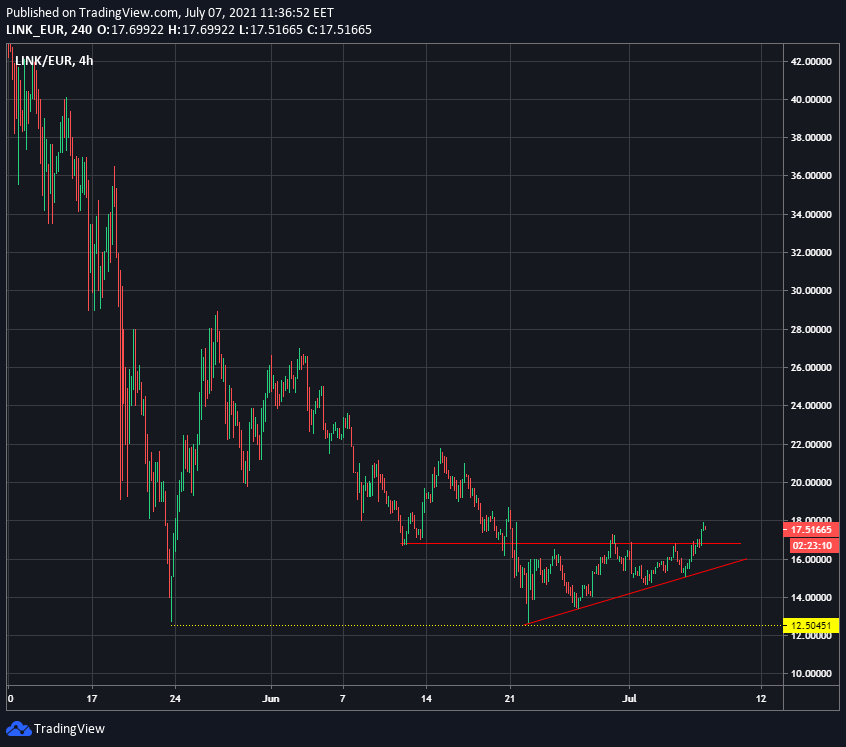 Polkadot (DOT) is also moving bullishly and trying to break out from the range pattern which it was trading in for the last 2 weeks. The price has fluctuated between €12 and €14 for some time now and any breakout from this range will determine the next movements. Range trading is usually an accumulation zone where bigger investors are increasing their positions. 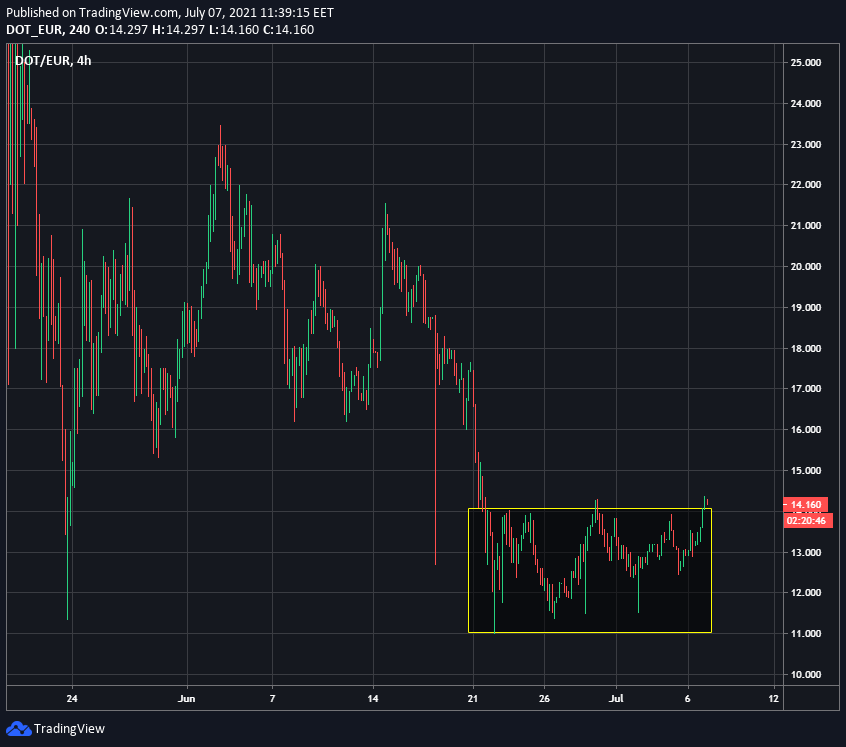