The last few weeks have been a rollercoaster ride for cryptocurrencies as prices repeatedly reached new lows and were extremely volatile. Bitcoin has managed to avoid its worst weekly close of 2021 so far, but it has erased all gains it had left from the start of the year.

The last few weeks have been a rollercoaster ride for cryptocurrencies as prices repeatedly reached new lows and were extremely volatile. Bitcoin has managed to avoid its worst weekly close of 2021 so far, but it has already erased all the gains it had left from the start of the year. Bitcoin is now trading flat and is down 55% from its all-time-high. 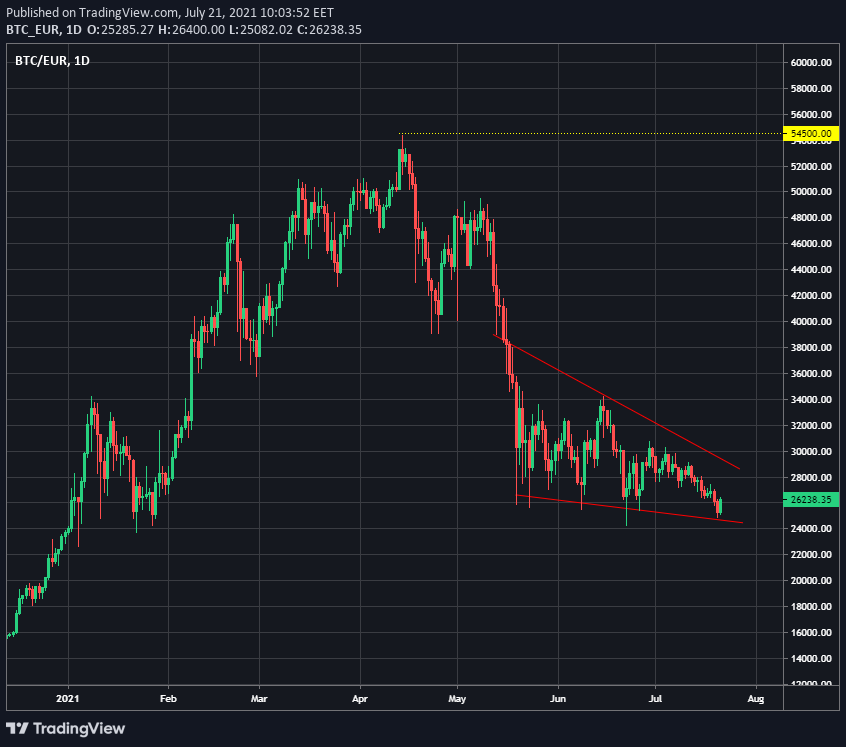 The price has been moving inside of a falling wedge pattern for the last 9 weeks which is generally considered to be a bullish chart formation, but can also indicate both reversal and continuation patterns depending on where it appears within the trend. Both scenarios come with different market conditions which must be taken into consideration during analysis. The differentiating factor that separates continuation and reversal patterns is the direction of the trend when the falling wedge appears. A falling wedge is a continuation pattern when it appears in an uptrend, and is a reversal pattern when it appears in a downtrend. The price of Bitcoin has been producing lower highs and lower lows recently while remaining in a downtrend. Even though pressure from sellers might be diminishing, buyers won’t turn things around until resistance is broken.

Market volatility is still high as the market sentiment is nearing its bottom values. According to the Crypto Fear & Greed Index, around 90% of retail traders are still bearish, and only 10% remain positive. The number was ranging from 10 to 20 in the last two months after it dropped from above 60 in May. Nails were bitten over the weekend after the Grayscale Bitcoin Fund (GBTC) embarked on one of its biggest unlocks to date. The event has put some pressure on the market, which retail traders responded to negatively and sold their spot positions to avoid further losses. However, the unlock does not concern BTC spot positions, but rather shares of GBTC funds sold on the stock market, meaning investors who purchased shares six months ago now have the option to sell them.

Cardano’s Alonzo hard fork has been successfully deployed, which is a milestone on Cardano’s roadmap and paves the way for smart contract functionality. The full release has a tentative publish date in August. Alonzo brings several significant changes to the Cardano network, including the ability to host decentralised finance (DeFi) applications. ADA has had a highly-successful last 12 months, and it shows in the token’s price rise as it is one of the biggest winners year-to-date. The price is currently hovering around €1, while it was around €0.14 at the start of the year. 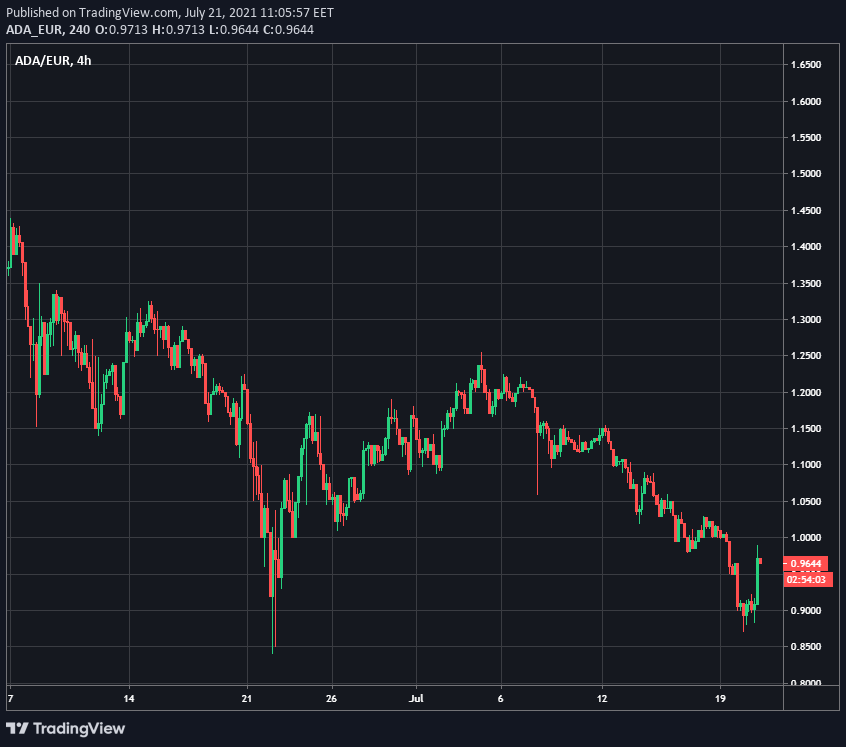 Grayscale Investments has also added ADA to its large-cap fund, making it the fund’s third-largest holding, only behind BTC and ETH.

Altcoins are following Bitcoin in the downtrend. The total cryptocurrency market cap touched the €1 trillion mark last week, down from the all-time-high of almost €2.2 trillion. Bitcoin’s dominance stands at 46%, while Ethereum has a 17.4% market share. The second-biggest cryptocurrency is trading around €1,500, down from the €3,600 reached in mid-May. The pattern is mostly the same as Bitcoin’s, and as soon as the “big brother” finds its support level, Ethereum will most likely follow suit. 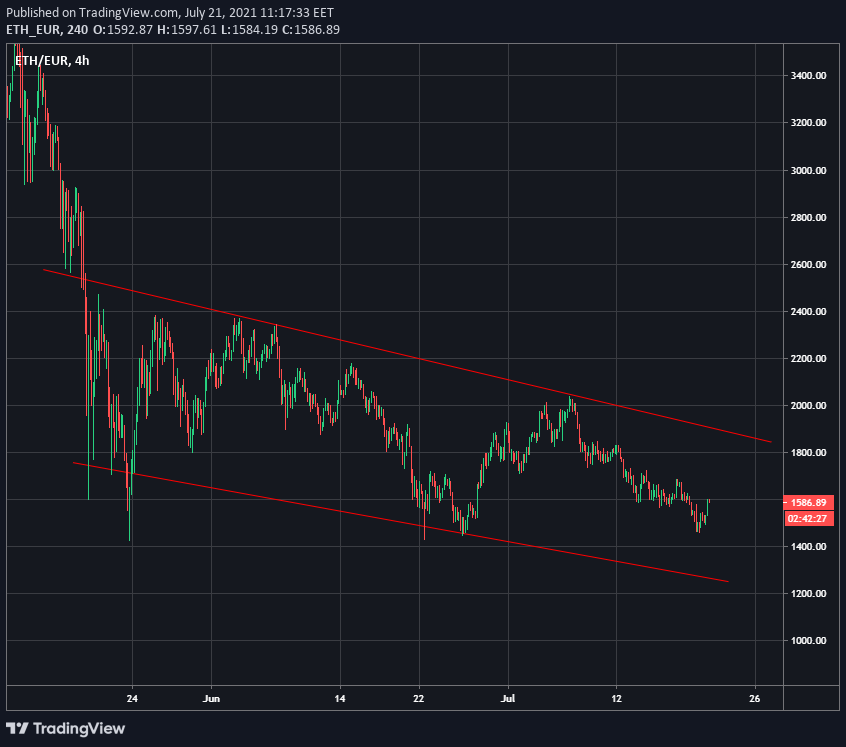 Leading oracle provider, Chainlink has onboarded 281 different crypto projects during 2021 so far. Third-party Chainlink integrations are currently totalling 650, almost half of which were onboarded this year. The price of Chainlink is just above €12, down from its all-time-high of €47. LINK is placed as the 15th biggest cryptocurrency according to market cap, valued at more, than €5,3 billion. 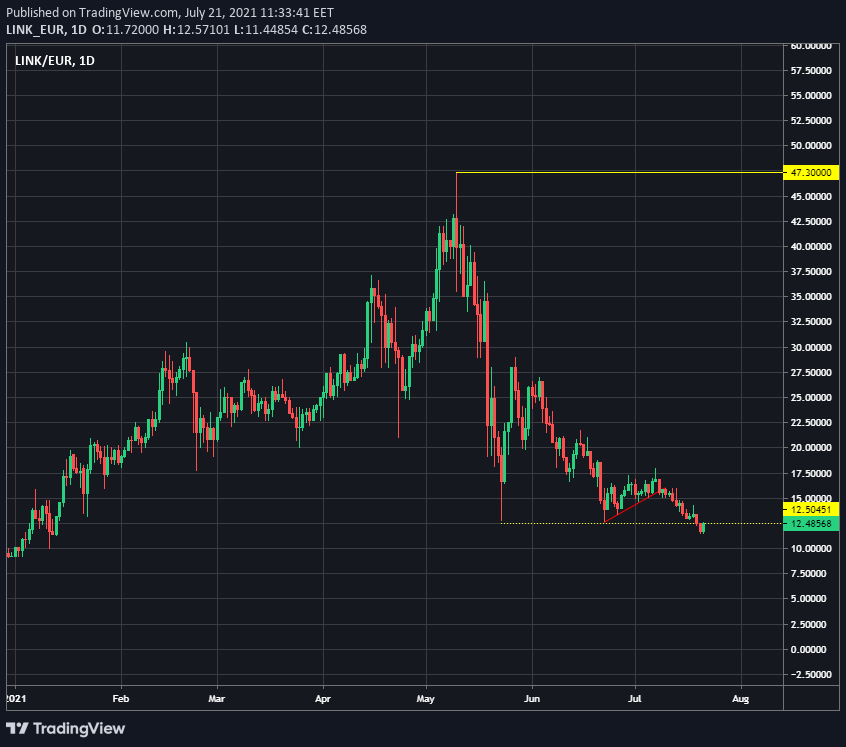