The crypto market experienced some volatility on intraday charts as Bitcoin was moving bearishly and closed below the major support level on the daily chart. However, the week was full of positive news, especially about crypto adoption by big institutional players, who helped the market to rebound.

The crypto market experienced some volatility on intraday charts as Bitcoin was moving bearishly and closed below the major support level on the daily chart. However, the week was full of positive news, especially about crypto adoption by big institutional players, who helped the market to rebound. Ranging markets in Bitcoin are good for Altcoins as they help them to benefit from the price of satoshis.

Bitcoin rebounded on Wednesday after the news that Tesla is now accepting Bitcoin as a payment method. This announcement boosted the BTC price as Elon Musk revealed Tesla will be accumulating bitcoins and not exchanging them into fiat currency. Tesla is just the "tip of the iceberg" for institutional involvement in crypto following MicroStrategy, which was the first publicly listed firm in the U.S. to hold BTC in reserve.

BTC is moving in a range between EUR 45k and EUR 50k, which are acting as support and resistance levels. ETH and LTC are simply following Bitcoin, any bullish move in their big brother could also prove bullish for ETH and LTC. 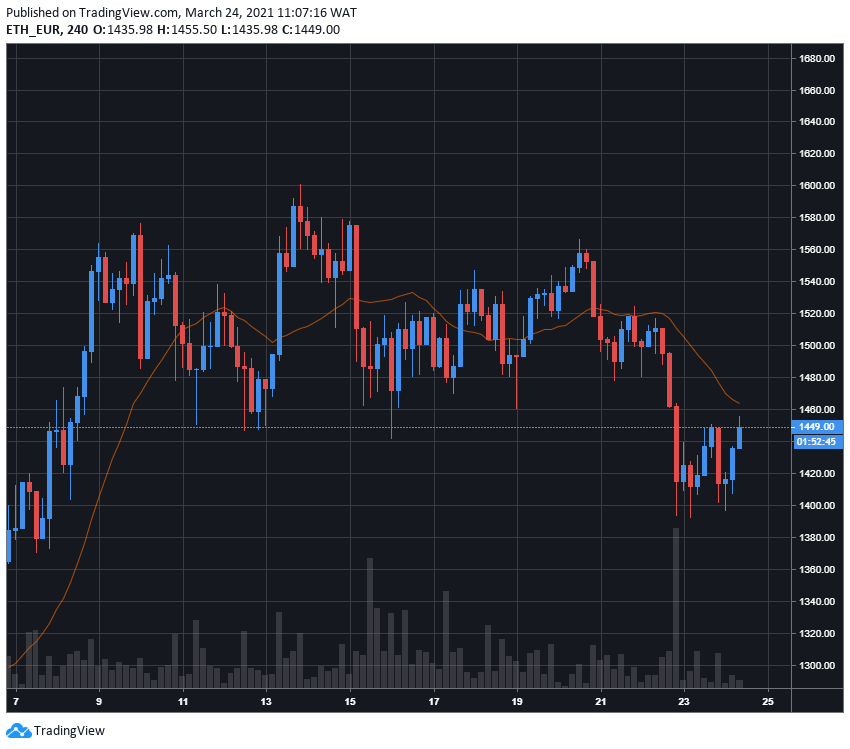 The 26th of March is an important date for Ethereum, as USD 1.5B worth of options contracts will expire. During such an event, the market tends to lean towards the strike price where most options will expire at a loss. It’s going to be a volatile day, but the big picture will stay the same.

Even though most of the coins were moving within their normal range, some of them were gaining momentum. Among the top weekly gainers were XRP, MIOTA and BEST.

Will XRP be relisted?

A rumour about the potential relisting of XRP on some exchanges fuelled the price of XRP. The SEC lawsuit back in December against Ripple meant a huge setback for the XRP price, but now it’s slowly getting back on track. Some positive comments were made by attorney Jeremy Hogan regarding the Ripple-SEC case against the firm and its executives, which could help Ripple to win the case. XRP reached the €0.5 level which is a 20% weekly gain. 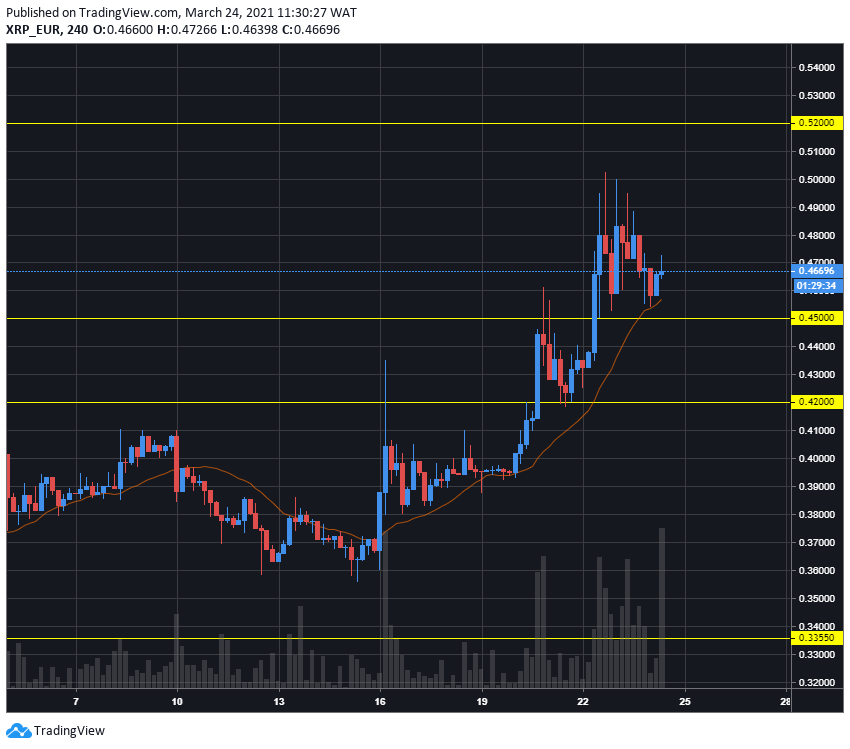 IOTA rallied, hitting its highest levels in more than three years. The price increase was mostly connected to the upcoming makeover of its Internet-of-Things (IOT) protocol which is designed to make IOTA more appealing to investors and traders alike. The major upgrade is scheduled for April. 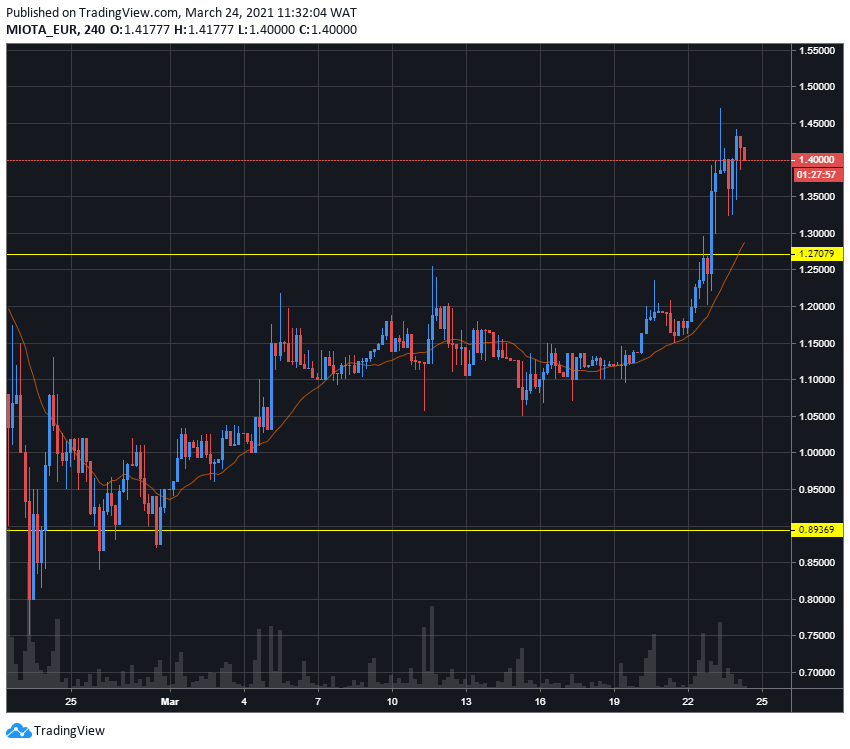 BEST was again one of the best weekly gainers. Bitpanda’s Ecosystem Token, BEST, blasted over the €1 mark and hit a new ATH with bullish momentum out of a cup and handle pattern. The formation is a bullish signal further extending an uptrend. The latest news from Bitpanda was the announcement of the closing of a Series B funding round for $170 million, pushing the company’s valuation to $1.2 billion. This makes Bitpanda one of Europe’s largest crypto platforms, and Austria’s first unicorn ever. 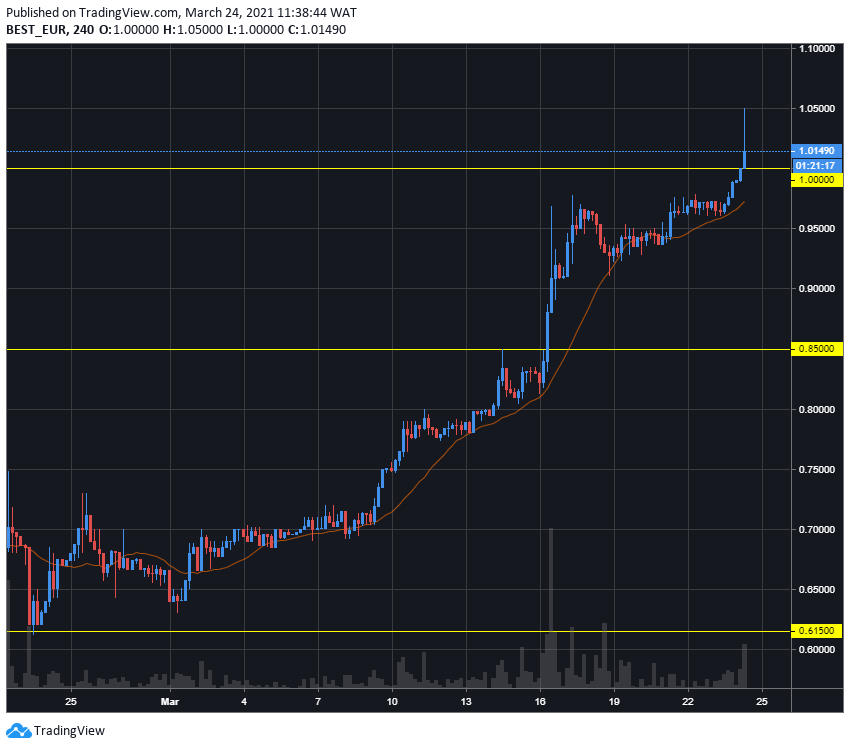 You are not trading on Bitpanda Pro yet? Register now!