Overall, crypto markets experienced the biggest weekly gain in more than 4 weeks as sentiment improved, and investors pushed the prices higher. The Crypto Fear & Greed Index rose from extreme fear of 10 index points to the neutral zone of 50 index points in just 7 days.

Behaviour on crypto markets is traditionally very emotional. People tend to get greedy when prices are rising, which leads to FOMO (Fear of missing out) - conversely, people often sell their coins in an irrational reaction to seeing figures in red. The index is now in the middle, illustrating the fight between bears and bulls for control over the market.

After weeks of consolidation, Bitcoin’s impulsive move saw the emergence of a first bullish weekly candle. The weekly candle closed as a bullish hammer pattern and broke the high of the previous weekly candle, which was the first sign the market is turning bullish. BTC jumped some 30% in the last 7 days and traded around the €34,000 level, the highest from mid-May.

Monday's price gains accelerated amid a short squeeze. The strong bounce over the weekend occurred as shorts covered positions. Traders who had previously bet on further price declines tried to get out of their positions, while others were liquidated due to margin calls. Roughly 2,000 short positions were liquidated over a two-hour period. 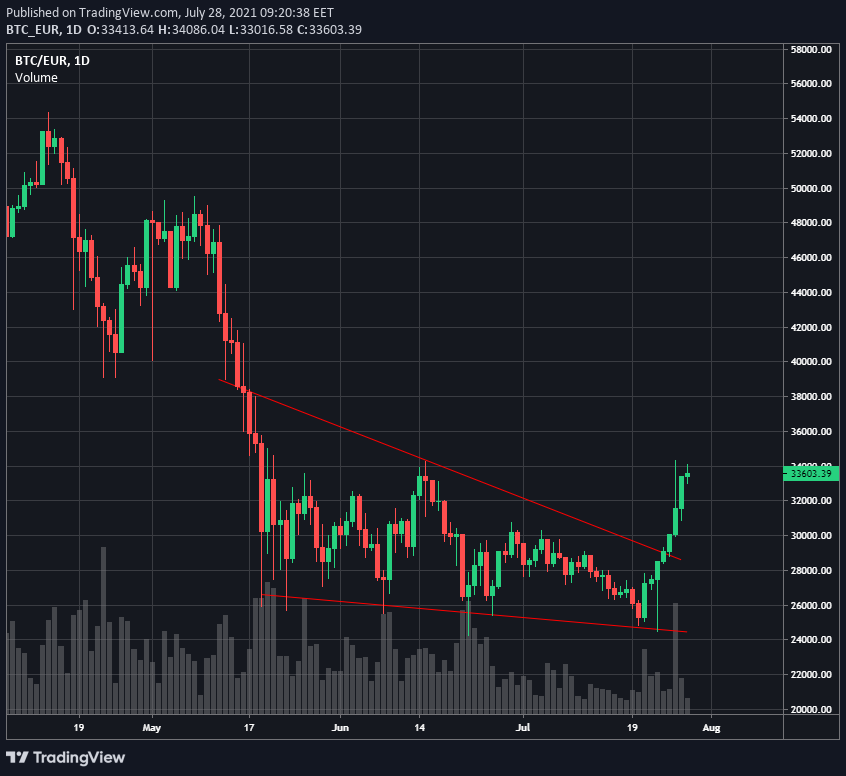 Bitcoin is back in positive territory year-to-date after erasing all gains from this year in the week before. The biggest cryptocurrency by market cap metrics is up by some 45% so far in 2021.

Altcoins are joining the party

It took two months for the current chart to form a base for an impulsive move to the upside. Ethereum followed Bitcoin on the rebound and soared to around €2,000 and above a falling wedge formation which has been building since mid-May. The second biggest cryptocurrency in terms of market cap gained 35% last week and traded above the high from July. 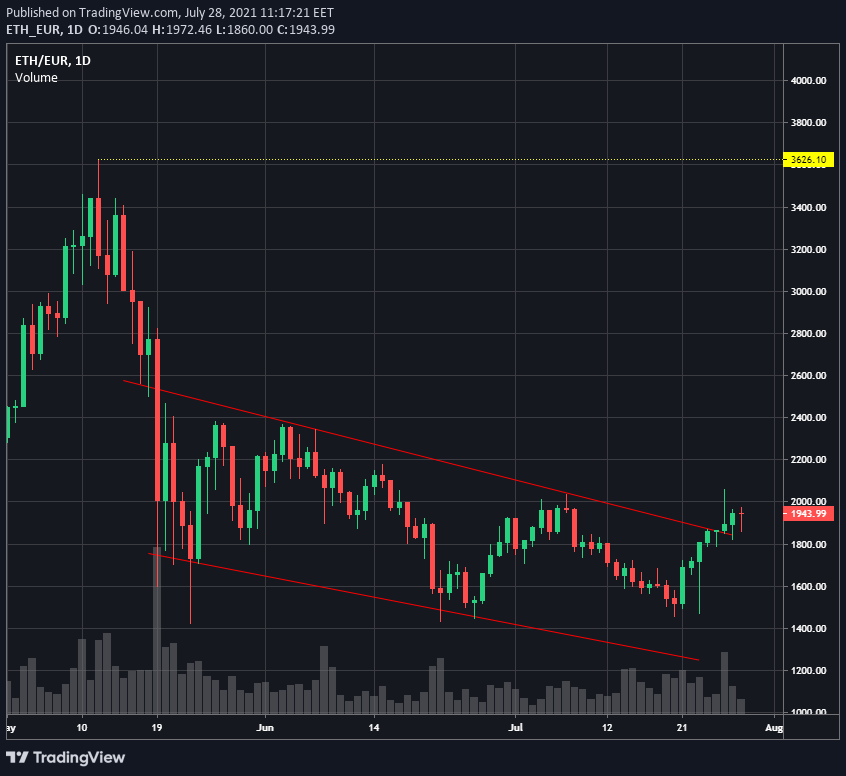 Trading was volatile with huge spikes in both directions as traders were acting very emotionally and reacting to news. A spike to the upside was followed by a quick decline on Monday with an intraday gap of around 15%. One of the best altcoin performers was LINK, which shot up by almost 50% in a week. The price climbed to almost €17 during the trading session, the highest in nearly four weeks.

IOTA joined the party as the price advanced to the top of a trading range, which has been building since mid-June. Bulls pushed the price above €0.7, an increase of almost 50% during the last seven days. Price is still in the trading range between the €0.5 and €0.75 positions, which are acting as support and resistance lines. 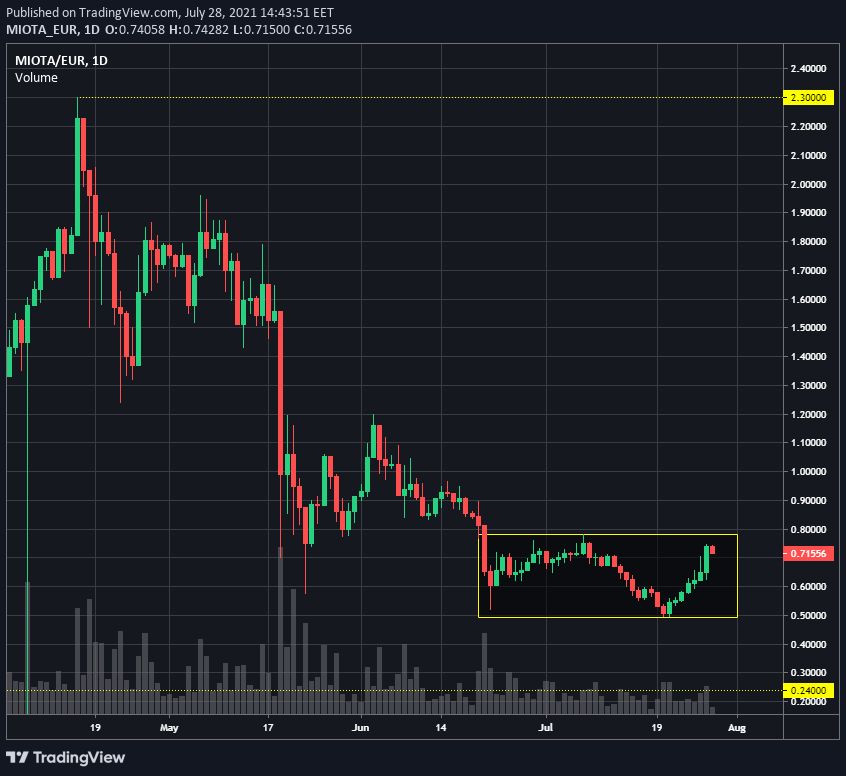 The ADA price made a comeback above the €1 mark at the start of the week. The Cardano price surged by 37% from the 20th of July to the 26th of July and closed slightly below the 4th of July swing high at €1.25, which is acting as a resistance line. The price is currently trading just below a €1.1 level and has a strong level of support on €1 as traders are anticipating progression with the Alonzo hard fork.

Cardano recently announced that it has successfully conducted the Alonzo White Hard Fork and that there had been no problems caused by the fork so far. This feature is the next step in bringing the Cardano network closer to smart contract compatibility. According to the Cardano roadmap, the network will be able to fully support smart contracts by September 2021. 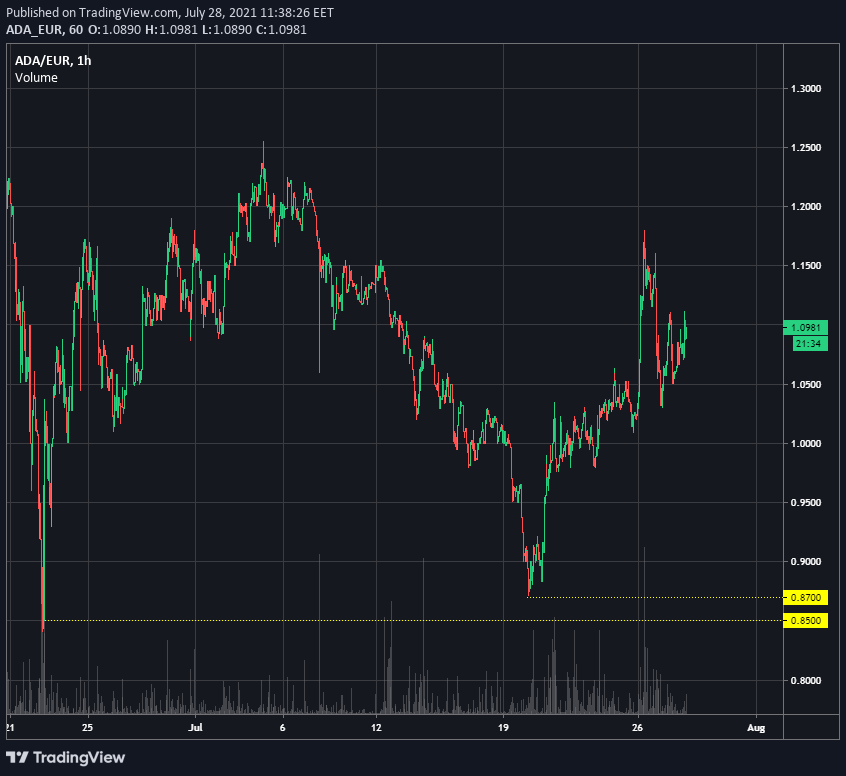 The market sentiment improved gradually over recent days as cryptocurrencies are moving higher. Bitcoin’s positive momentum is inflating altcoins, among them is also BEST, which is up by almost 30% in the last seven days. 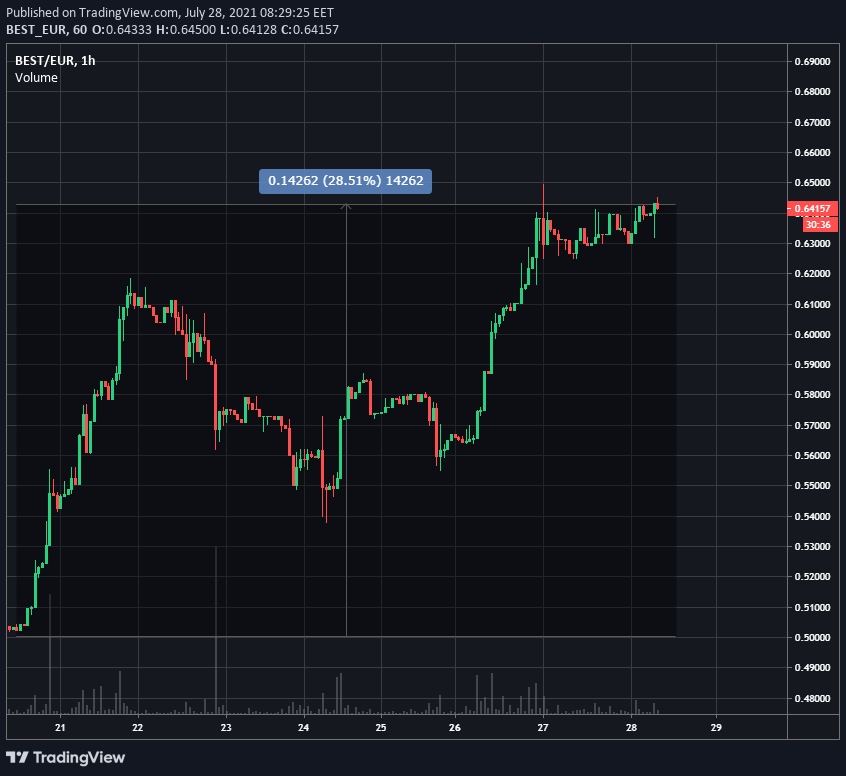 Trading volumes were trending downward last week when the crypto market was in a consolidation zone and range trading prevailed, but a recent spike in price was followed also by a higher volume.

The increasing volume amid crypto strength suggests that the strong recovery was supported by an influx of buyers, which is also a healthy sign for the market. Nevertheless, it’s summertime – many people are on vacation and a lower volume can be explained by the lack of active traders who simply took some time off.