It’s been a great week for Bitcoin and the overall crypto space. The most popular crypto rallied to almost €36,000 and most altcoins followed suit.

-       Another positive week in the crypto space

-       Cardano is in the last stage of the Alonzo update

Another positive week in the crypto space

It’s been a great week for Bitcoin and the overall crypto space. The most popular crypto rallied to almost €36,000 and most altcoins followed suit. BTC reached an all-time-high near €55,000 in mid-April this year, when market euphoria peaked. Then, the price tumbled over the next few months as China cracked down on cryptocurrency mining and exchanges, while regulators around the world were tightening industrial rules. After weeks of consolidation and range trading, Bitcoin closed bullishly on the monthly chart which carries significant weight in this region. Based on the above, it seems that more bullish sentiment will come this month. However, there are some more resistance levels on the upside and a pullback could happen from there. BTC’s price increased from the 21st of July for 10 days straight which is its longest positive streak since 2013. 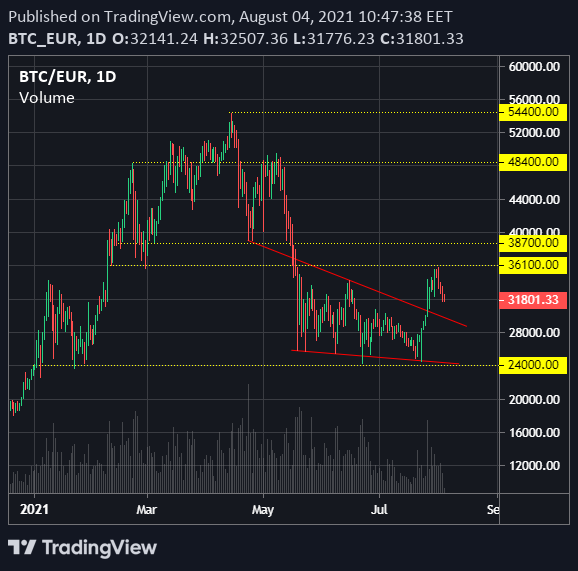 The number of people using cryptocurrencies around the world has doubled in only six months. The number of global users has reached 221M, meaning it only took four months to double the global crypto population from 100M to 200M.

Ethereum recorded a 12-day winning streak ahead of the much-anticipated London hard fork launch. It contains five Ethereum Improvement Proposals (EIP), which are designed to improve the Ethereum network. Of these five EIPs, EIP-1559 has been the most controversial due to its radical redesign of the network’s fee market, but other proposals also play an important role. ETH is currently valued at around €2,200 per coin, with a recent all-time-high of €3,600. Ethereum’s total market cap is currently standing around €265 billion, making it the second-largest cryptocurrency by market cap. Ethereum’s value is mostly derived from the utility it provides by powering transactions within the DApps (Decentralised Applications) that are built on the network. Simply put: the more DApps, the more transactions, thereby leading to a higher ETH price. 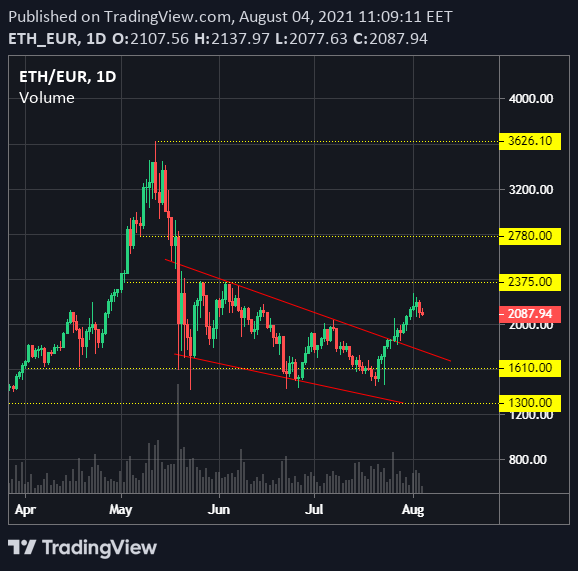 It took more than two months for the current chart to form the base for an impulsive move towards the upside. ETH followed BTC on the rebound and soared above €2,000 before the London fork. Ethereum gained 50% from the 21st of July, and it is potentially ready to gain more traction after its upgrade. The proposals involve huge changes to the current status and are much needed in order to compete with younger smart contract networks such as Polkadot, Solana, Cardano and others.

The most recent BEST token burn has been completed and 15,812,733 BEST tokens have been burned which is equivalent to €10,047,410. It’s been almost 2 years since BEST was launched, which is continuing to be used to pay for trading premiums and fees and to claim BEST Rewards every month. Burning tokens reduces the supply which theoretically increases the value of tokens that are still in circulation and benefits token holders. The burn events take place on a quarterly basis until 50% of the total BEST supply (from an initial 1 billion BEST tokens) is destroyed. 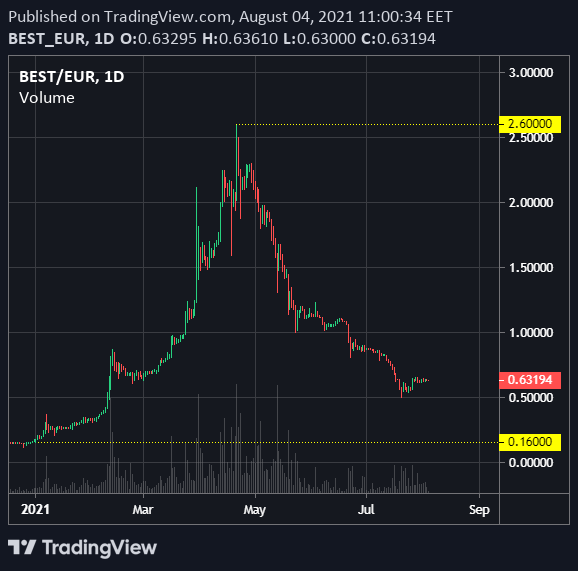 Cardano is in the last stage of the Alonzo update

Cardano is seeing bullish movement in anticipation of the final deployment of its Alonzo update on the mainnet which is planned to happen this month. On the 15th of July, the Alonzo test net was hard forked from the Alonzo Blue node to the Alonzo White node, marking the last stage before its final launch. 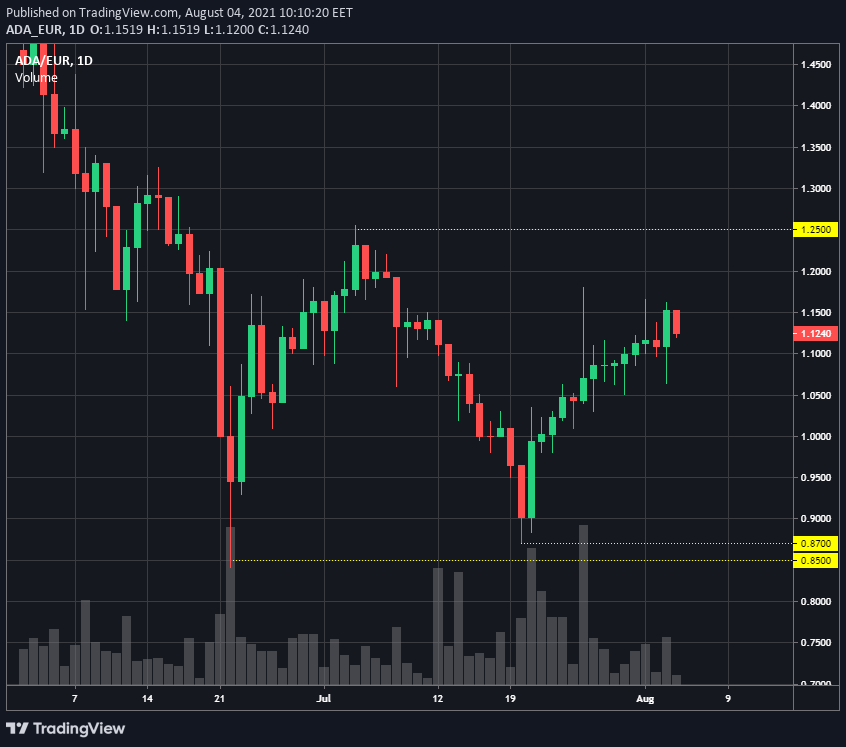 The ongoing phase of the protocol’s roadmap is the Goguen phase, which is the third phase following Byron and Shelley. The Goguen phase was split into three stages, Allegra, Mary and Alonzo. Alonzo, the current update was further split into three different phases named Blue, White and Purple. The completion of this phase will bring the much-anticipated smart contracts to the network. ADA is one of the most stable tokens, mostly because around 72% of all ADA tokens are staked in the network, amounting to around €25 billion. Last month, Grayscale added ADA to its Digital Large Cap fund, making it the third-largest component after Bitcoin and Ethereum.

Germany plans to allow certain institutional funds to invest billions of euros in crypto-assets for the first time. The law will let so-called “Spezialfonds” with fixed investment rules allocate as much as 20% of their holdings in Bitcoin and other crypto-assets. The funds, which can only be accessed by institutional investors such as pension companies and insurers, currently manage around €1.8 trillion.

XRP is to be used in Japan and the Philippines

XRP hit a 5-week-high following the overall market rally and news that XRP would be used with Ripple’s xRapid cross-border payment service to allow remittance transfers between Japan and the Philippines. 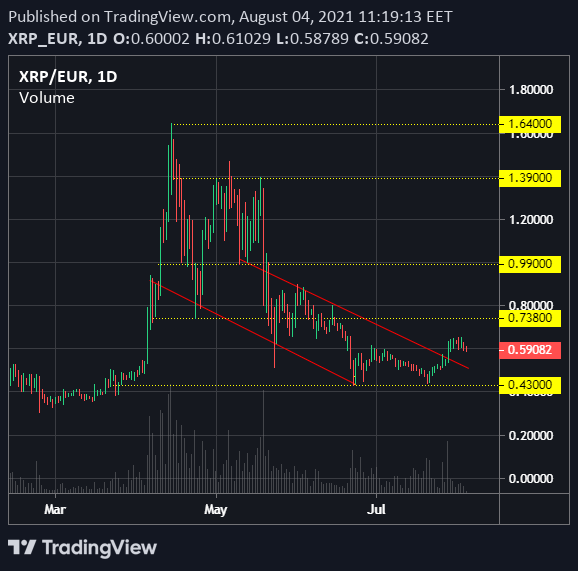 Each year, Philippine nationals living in Japan send home €1.5B worth of remittance, incurring some of the highest transfer costs in the world. Japan’s money transfer provider SBI Remit, Philippines-based mobile-payments service coins.ph, and crypto exchanges SBI and VC trade teamed up to bypass these steep remittance fees for sending money home. If all goes according to plan, senders will have the option to bypass the banks and send funds home in XRP instead.