Last week was all about Ethereum’s London hard fork event which was successfully integrated and showed immediate effects.

-BTC recovered and crossed above its 200-day MA

Last week was all about Ethereum’s London hard fork event which was successfully integrated and showed immediate effects. The network included the improvement proposal EIP 1559, which was designed to simplify how transaction fees are paid using a burning mechanism, as it effectively removes some ETH from circulation. The fees mechanism looks to be bullish for the ETH price as supply reduction will help to lower the inflation rate and could make it a deflationary asset if the burn rate gets high enough. 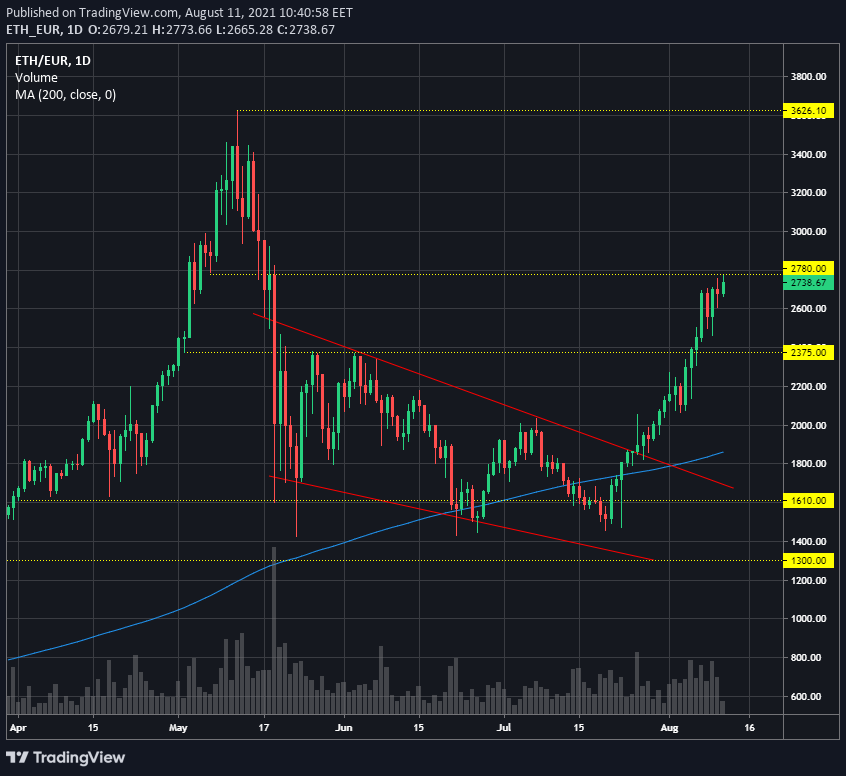 The reduction in the amount of new coins being minted, as well as a burn mechanism that reduces the supply, could be a catalyst for Ethereum’s price and could translate into higher returns than those for Bitcoin in the longer term. Ethereum is slowly decoupling from Bitcoin which has been noticeable this year as Ethereum has shown a higher year-to-date return than Bitcoin. The correlation between the two biggest coins is dropping and Ethereum is outperforming its “big brother”. Ethereum closed the week with its strongest candle of the last 12 weeks which is highly positive on a higher time frame chart. The price almost doubled from the 21st of July and reached €2,780, its highest for almost 3 months.

BTC recovered and crossed above its 200-day MA

Bitcoin crossed above its 200-day moving average at around €37,000 and reached its highest level in almost three months as well. The move could signal a continuation of this bullish momentum as retail investors usually see moving average lines as strong support zones. The price has surged by about 60% since the 20th of July when the €24,000 support level held firm. 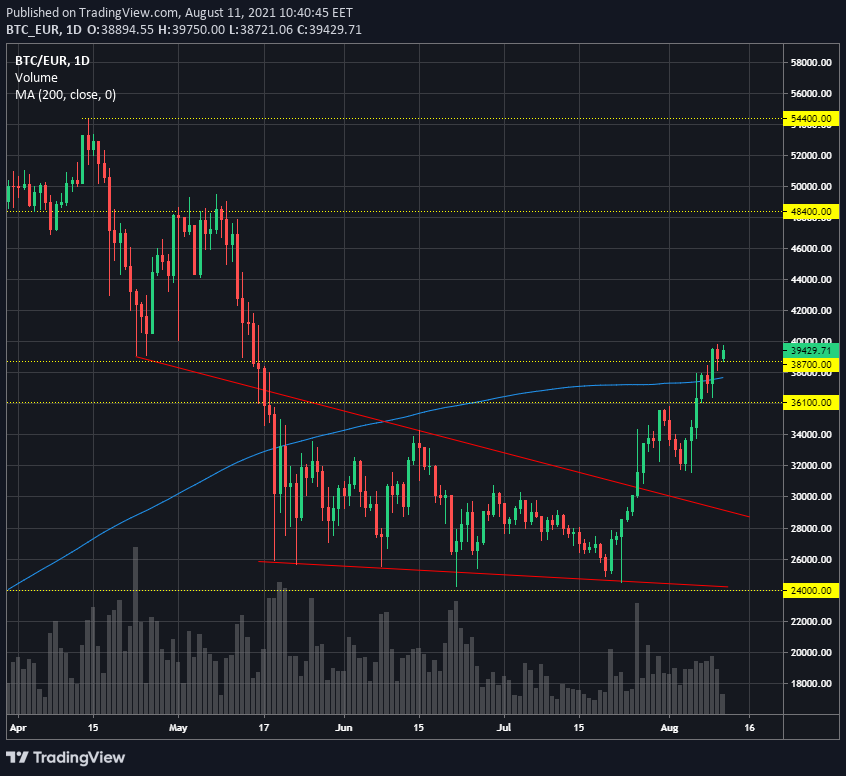 The crypto market is moving positively and has experienced its biggest weekly gain in more than 4 weeks as sentiment improved substantially. The Crypto Fear & Greed Index rose from extreme fear with just 10 index points to a greed zone of 70 index points in the last two weeks. The level topped the maximum number from May before the crypto market experienced a meltdown.

The shift in market sentiment compared to a few weeks back lifted the price of all major altcoins.

ADA’s price almost doubled from the lows of June and July and has been in the spotlight in recent weeks as Cardano’s massive fan base are anxiously awaiting the launch of the Alonzo upgrade which will enable smart contract capability. 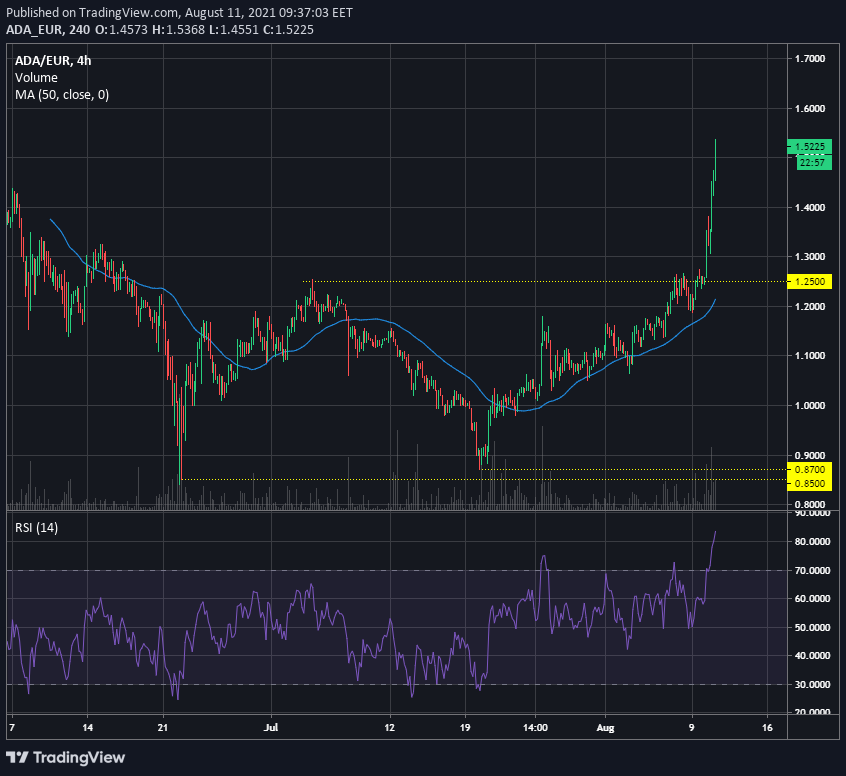 BEST also performed well last week and its price accelerated after the burn event which took place the week before. Price has been moving bullishly since the 20th of July and has reached its highest levels in a month. An RSI indicator shows it is picking up from its oversold levels, indicating the bullish momentum could continue. 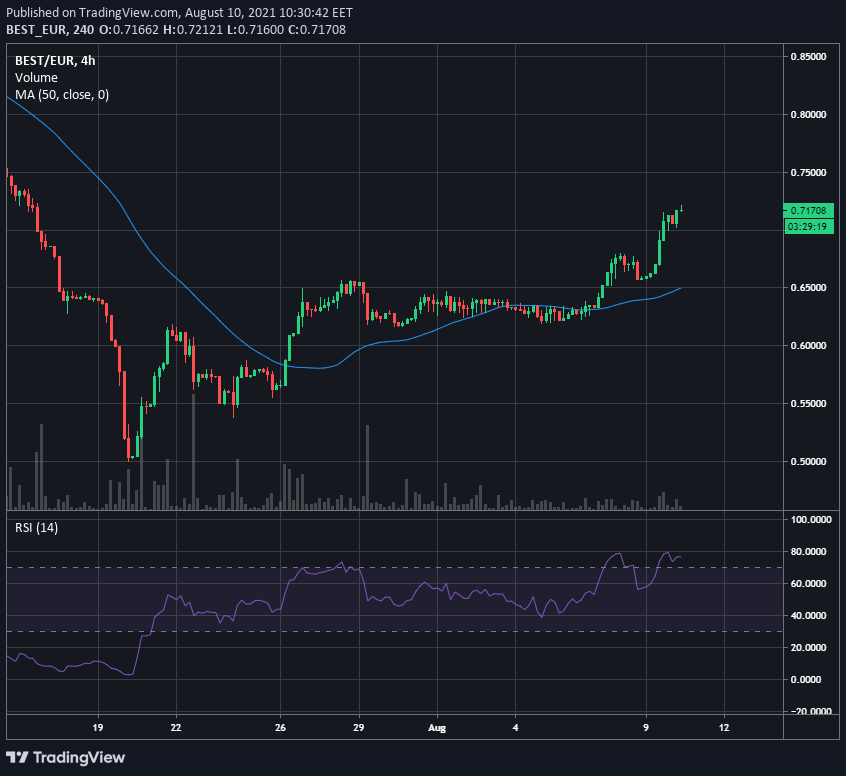 IOTA also showed strength as its price topped its highest value from the 20th of June and gained some 80% since its July low. The price is approaching the €1 mark, the highest level seen in almost 3 months. The MACD is moving into the positive zone and has crossed the signal line with speed, indicating that the bullish momentum in the price is strengthening.

The total market value of cryptocurrencies increased to about €1.6 trillion up almost 50% from the July low amid surging demand and improved sentiment. The risk-taking mood has returned to digital-asset markets after a steep correction that saw prices fall from an all-time-high in April.

AccuWeather, the global weather and digital media leader, announced that it is bringing its world-leading weather data to blockchains by launching a Chainlink node. Chainlink is the industry-leading secure blockchain middleware, making APIs easily compatible and accessible with any blockchain. Through Chainlink node, AccuWeather can supply and sell data directly through smart contract applications running on numerous blockchains, as well as cryptographically sign data so users know for a fact that it came directly from their API. The ability to connect weather data to blockchain networks is critical to support the many new smart contracts being built on-chain for the weather industry. 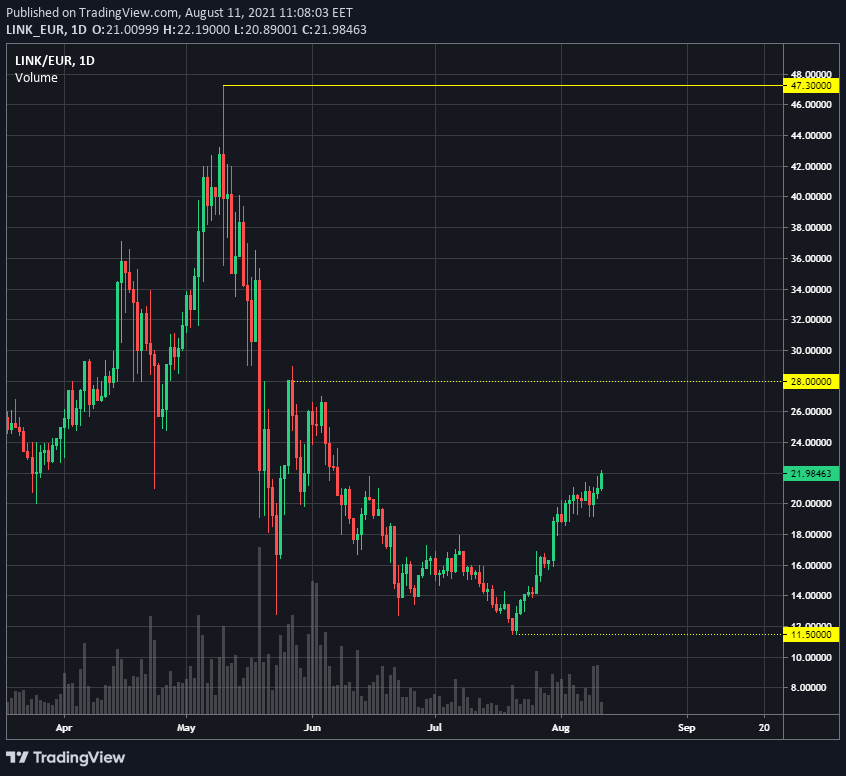 LINK is also moving bullishly along with the overall market and its price doubled from the low seen in July. Chainlink is currently the 13th biggest cryptocurrency with a market cap of around €9.4B.