ETH and ADA are leading the altcoin trend as traders stay optimistic about Ethereum and are awaiting Alonzo, while BTC is back to posting bullish candles and PAN saw a massive spike. Learn more details about this week in our recap.

Bitcoin closed with its fifth bullish closure in a row in the weekly chart as the BTC price continues to hover above its 200-day moving average with the bulls still in play. BTC is trading above the €43,000 price tag for the first time in over three months. The markets are back above a market cap of €1.8 trillion as most of the cryptocurrencies in the top 10 by market cap rallied over the weekend, with Cardano posting the highest gains.

Bitcoin is fighting against a resistance level of just under €44,000 but the bulls are still in control. Fundamental factors have also improved in recent weeks as the hash rate has now recovered to early June’s levels, indicating that miners are coming back online after China shut down its activities. 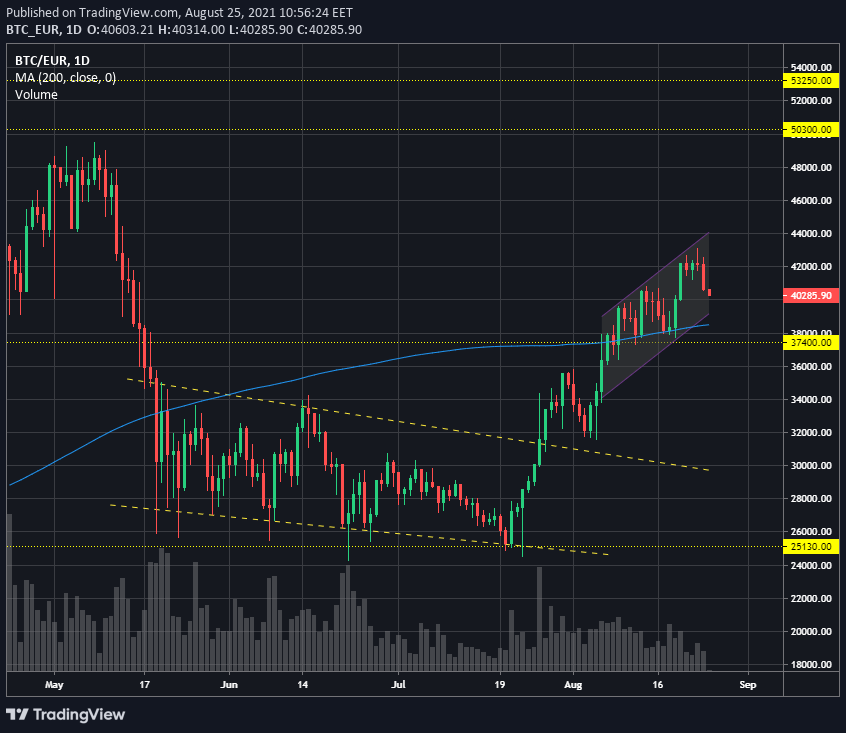 According to the altseason index, altcoins are outperforming Bitcoin this month. The Altcoin Season Index tracks whether sentiment on the markets is pointing altcoins towards BTC during a given timeframe and is showing the value of 84 for this period, which means a better performance for altcoins in comparison to Bitcoin. Bitcoin has shown some 20% gains so far in August, Ethereum’s price rose by some 25% and some smaller altcoins posted even greater gains.

The main reason for altcoin’s outperformance was the uncertainty on the Bitcoin chart and continuous consolidation that began about a week ago. Bitcoin has been trading in a tight range between €37,000 and €43,000 for more than two weeks, while some altcoins broke out of their ranges and surged higher. BTC’s dominance has been hovering around the 44% level for the past few days after reaching 50% on 27 July, while Bitcoin’s dominance had been above 70% in the beginning of the year.

Optimism over Ethereum remains high after its successful London hard fork deployment earlier this month. The bulls are still in control, buying minor dips and pushing the price higher while ETH is trading just under its psychological resistance level of €3,000. 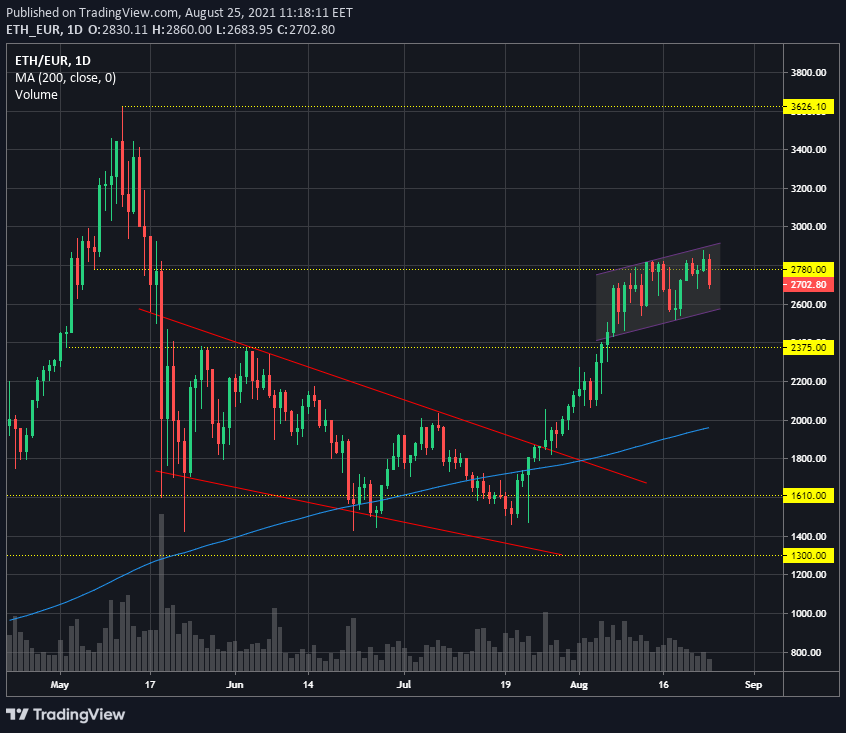 The price is ascending in a tight channel and waiting for a breakout, which will indicate whether the next leg heads up or down. The market is still very bullish, which is evident in the Crypto Fear & Greed Index that has risen to 73, indicating greed. Just a month ago, the indicator was showing a reading of extreme fear at 10. This shows just how quickly the crypto markets can look up again and how sentiment can change from bearish to bullish within very short time periods.

ADA in the spotlight again

Cardano was in the spotlight again as the price of its native token ADA jumped by more than 20% over the weekend and surpassed its previous all-time-high. 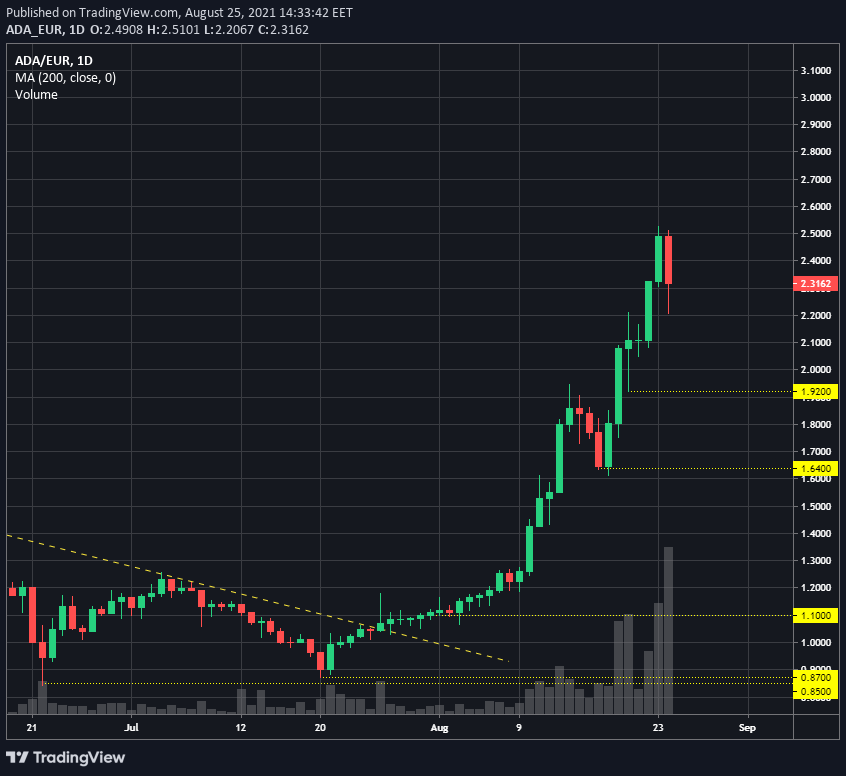 ADA has skyrocketed by more than 100% since the start of August after the first mentions of smart contract functionality came up. In addition to this fundamentally strong reason for the increase, the coin’s community has been actively promoting and supporting ADA. ADA has increased by almost 1,400% this year alone, ranking it in the top five best-performing cryptocurrencies. Learn more about Cardano and ADA in our Cardano Deep Dive.

PAN with a massive spike

After a long period of price consolidation, PAN saw a massive 30% spike on Friday. The price is still grinding higher and it's now trading above its 200-day moving average price. The line is commonly used to determine resistance and support levels and the longer the price remains above it in the daily time frame, the more it is considered to be in an overall uptrend. 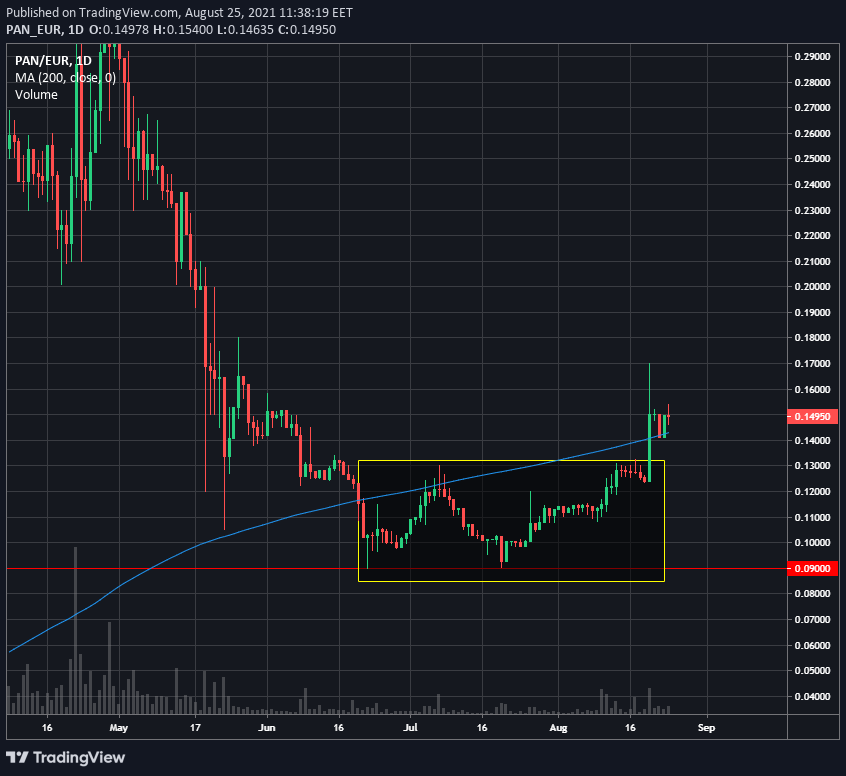 Are you trading like a Pro on the go yet? No?
Make sure to download the Bitpanda Pro App for iOS or Android