The recent flash crash knocked nearly 20% off the price of Bitcoin before it managed to stabilise above €37,000, and altcoins followed suit.

-The market is in recovery mode after a flash crash

The market is in recovery mode after a flash crash

The flash crash from the 7th of September knocked nearly 20% off the price of Bitcoin before it managed to stabilise above €37,000, but dropped a long way from its previous recent high of €45,000. Bitcoin saw its worst daily candle closure since the 19th of May. In less than an hour, long BTC positions experienced over €2.2B in liquidations as the price kept dropping to a low of about €36,800, while some €300B was wiped off the total market cap within a couple of hours. The so-called Bitcoin Day, marking when it officially became legal tender in El Salvador, resulted in pain for the bulls. Moreover, BTC’s market dominance has also declined to 40% as most altcoins have recovered faster. 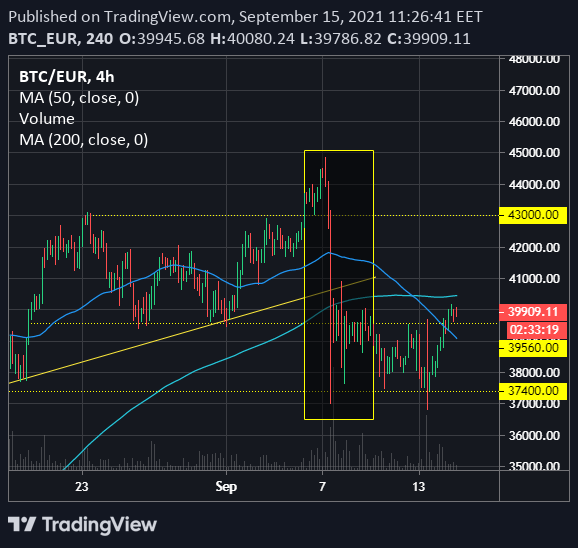 Bitcoin is leading the market and moving in a thin range between its support and resistance line after the selloff. Its daily candles are still volatile as the market is trying to find new levels of demand. Most altcoins are simply following BTC’s candlesticks as well. A higher time frame shows the market seems to be bullish but needs more time to recover after the crash. Regardless of Bitcoin’s short-term weakness, MicroStrategy has continued to increase its holdings. The company, which is one of the most active institutional players in the crypto space, revealed a purchase of 5,050 bitcoins bought at an average price of some €40,000 per coin. This has increased the company’s stockpile to 114,042 BTC, at an average price of about €22,800 per coin.

El Salvador, a country not economically stable enough to have its own currency, rather than relying on the U.S. dollar, made Bitcoin its legal tender. This has gone down as one of the most important days in Bitcoin’s history, as the date when the very first country in the world formally recognised Bitcoin as legal tender. In other words, no one is currently allowed to refuse payment in BTC. Just shortly after, the Ukrainian parliament passed a bill to legitimise and regulate crypto-assets within the country to attract investment. According to the Ministry of Digital Transformation, Ukraine intends to open the cryptocurrency market to businesses and investors by 2022. Both news only confirm the process of wide adoption of crypto.

On the 12th of August, Cardano successfully completed the Alonzo upgrade, facilitating the creation and execution of smart contracts on the public blockchain for the first time. The Alonzo fork enables smart contracts to be written for Cardano using Plutus scripts, which the team describes as “a purpose-built smart contract development language and execution platform using the functional programming language Haskell.” The ADA token has seen a slight decrease in price following the launch, but this is mainly due to the price being much higher than usual prior to the event. Traders also took some profits, but nevertheless, ADA’s price is still outperforming the market this year by a hefty margin. 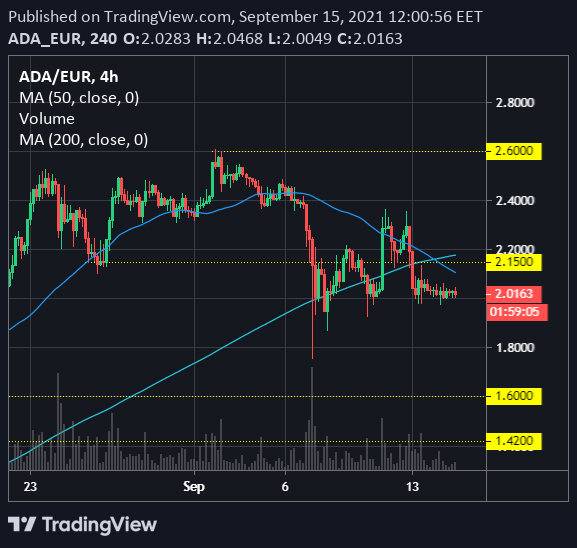 Bitcoin’s quick dip below €40,000 sent altcoin prices into freefall and fear has spread across the market that a bigger correction could happen. However, on higher time frames, market sentiment is still bullish, indicating that this could only be a minor correction before a bullish continuation. BTC’s failure to make a strong recovery in the past few days has resulted in thin range trading, but some altcoins were outperforming the market.

Polkadot surged some 35% over the weekend and passed DOGE to become the 8th biggest coin with a €28B market cap. The network’s native token, DOT, is now trading around €32, its highest since the 18th of May. 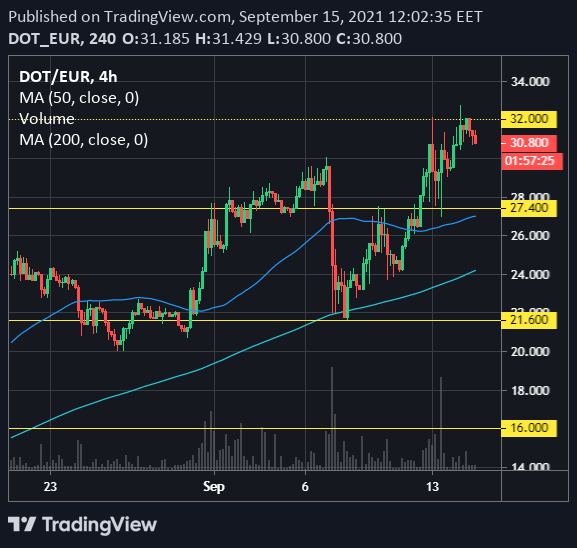 DOT is also performing well compared to BTC after turning parabolic since touching its support line at 0.00035 BTC which catapulted the price higher to reach 0.00083 BTC in the last few days.

ETH turned bullish, following Bitcoin’s movement. It rose to the upper resistance level of its descending channel, which has been forming for the past few days. This suggests that bulls are buying dips close to the support level and bears are keeping the price under resistance at around €2,900. 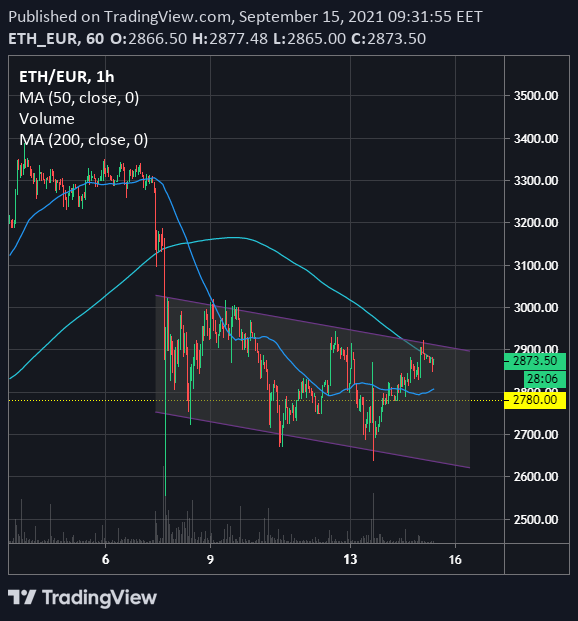 TRON is also moving in a bullish direction and is creating some price spikes. TRON stated “the foundation is growing rapidly, boasting over 53M accounts and processing 2.4B transactions”. The TRON token is changing hands at around €0.11 and gained some 15% last week. 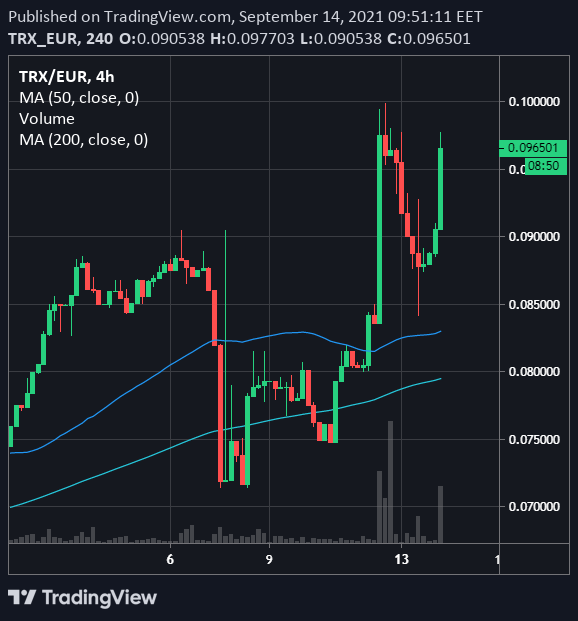 The price of IOTA spiked to an intraday high of €1.72. This surge in interest for the project came after the protocol integrated the Hornet update, which brought back the auto-peering feature and integrated a faucet plugin with the Hornet node. 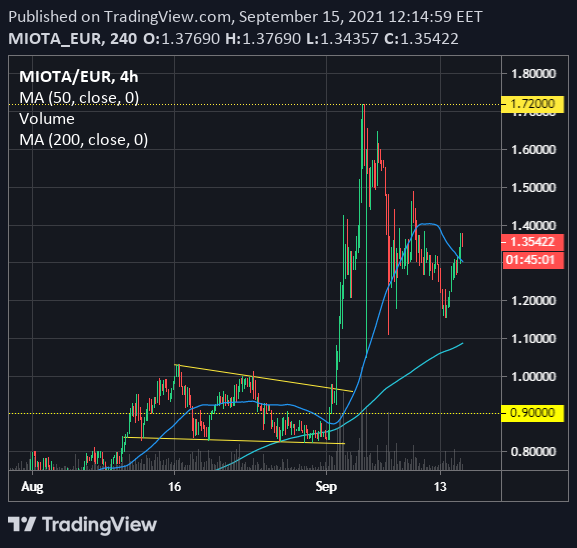 As Bitcoin’s dominance has shrunk close to all time low levels, the 'altseason' indicator is signalling that the momentum of altcoins could continue.