Following a relatively positive weekend for digital assets, Bitcoin fell some 15% and traded at around €35,000, while Ethereum lost even more and reached €2,300, its lowest level since the beginning of August this year.

-      Another sell-off connected to situation in China

-      Ripple will not settle out of court with SEC

Large-cap cryptos shed some 20% of their value

Cryptocurrencies dipped lower on Monday in a wide sell-off founded on rumours that a potential collapse of Chinese property giant Evergrande would not only hurt China, but also have implications on other markets. After a relatively positive weekend for digital assets, Bitcoin fell some 15% and traded at around €35,000, while Ethereum lost even more and reached €2,300, its lowest level since the beginning of August. The total crypto market cap fell below €1.6T on Monday morning. 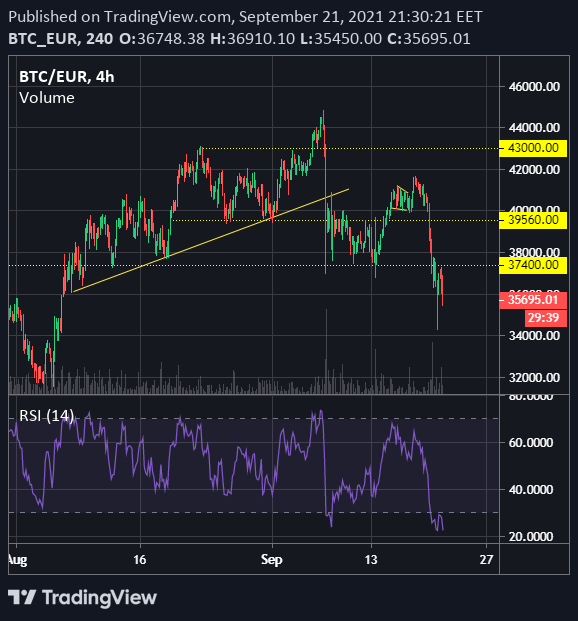 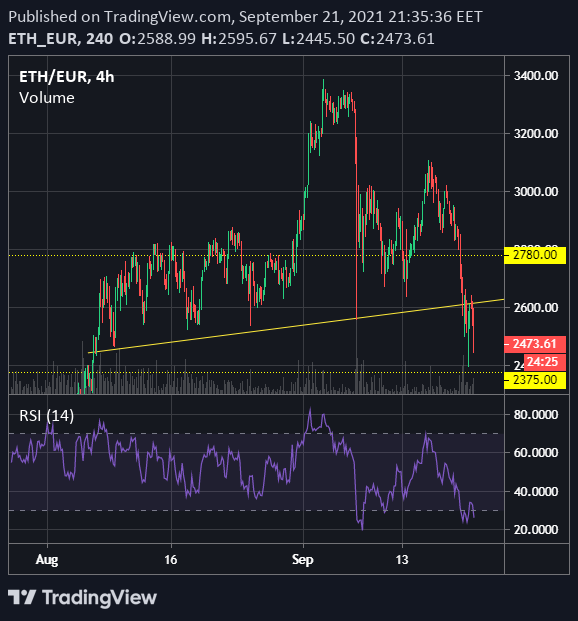 Another sell-off connected to the situation in China

The crypto market is increasingly affected by macroeconomic developments, likely thanks to institutional money inflows and increasing adoption. A lot of people treat crypto as a risky asset in their overall portfolio and trade it in line with the overall macro picture. Correlation with these types of macro events is only going to be higher in the future. The magnitude of a possible impact on the market also needs to be considered to illustrate this correlation in more detail.

Evergrande’s debt load stands at around €300B and has bond payments of roughly €80M due in September on outstanding notes maturing in Q1 of 2022. The company has 30 days from the scheduled date to pay or the bond defaults. The situation actually seems to be worse than it looks and China plays a big role in crypto, which is why the correlation is higher.

It will likely take several weeks for the developments surrounding Evergrande to play out and for them to have an actual effect on the global financial markets, meaning that traders might be in for a period of increased volatility.

After Bitcoin started to decline, most major altcoins followed suit. Recent data from the Crypto Fear & Greed Index indicates that the cryptocurrency market is experiencing a period of investor fear with a three-month low score of 21 out of 100. The index recorded one-year lows on the 21st of July with a score of 10. Low scores are often followed by a parabolic rally as we witnessed in the past. Major altcoins, such as DOT, ADA, LTC and XRP, lost some 30-40% from their September high. 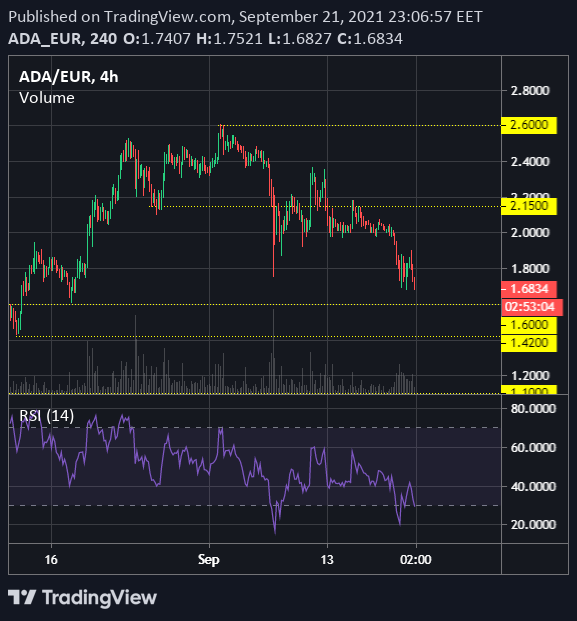 Cardano touched its all-time-high level of €2.60 in early September ahead of its highly-anticipated smart contract launch. ADA has plunged more than 36% from its peak since, recently slipping down to €1.60 due to the broader market sell-off. 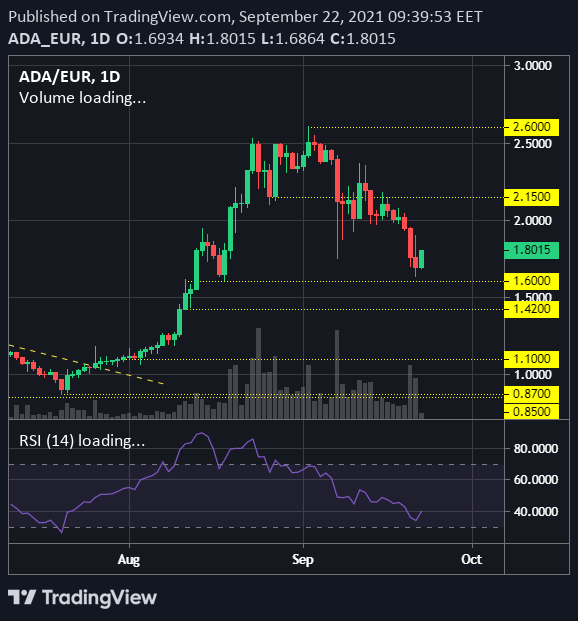 LINK’s price experienced an even deeper drop, from the top at €31 reached in the beginning of September down to €18, its lowest since the end of July. 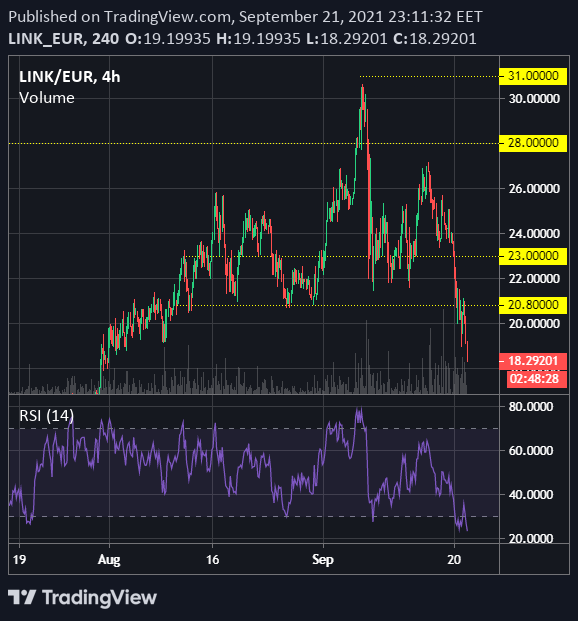 DOT was surging before the correction and had reached almost €33. Now the 9th biggest crypto according to market cap is changing hands at around €22. 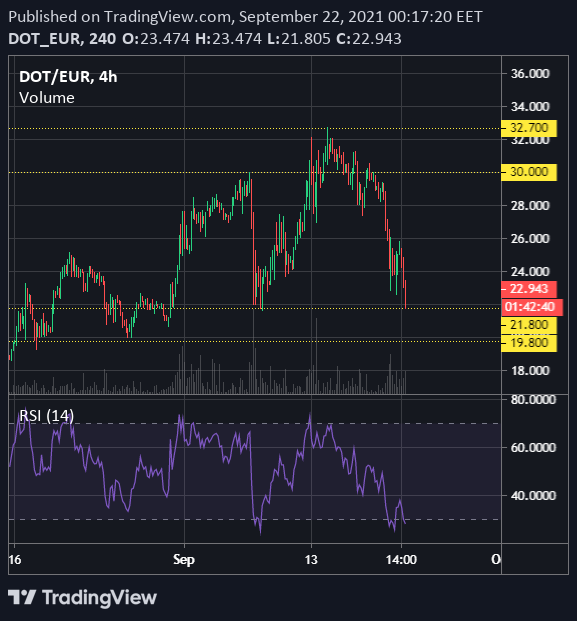 Just three weeks ago, LTC was trading close to €200, but since then it has declined to €130, where it is trying to find support. Bears still have stronger hands now, likely due to extreme fear on the market. However, a rebound can be expected as most sellers probably left the market within the last three days. 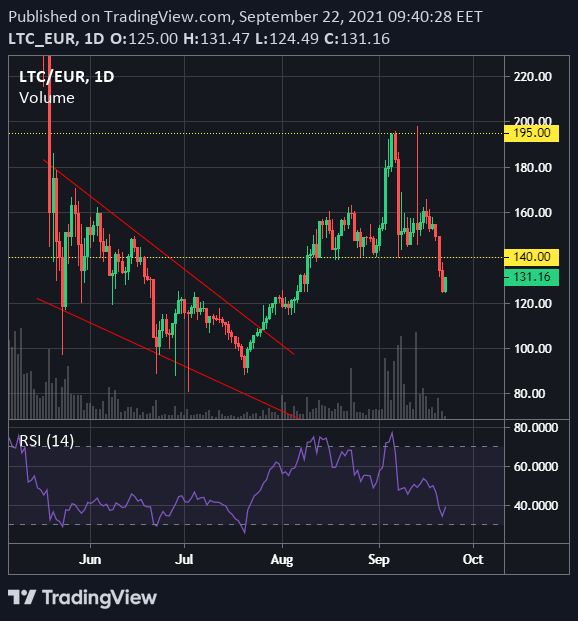 Ripple will not settle out of court with SEC

The lawsuit in question, Ripple vs SEC, has been ongoing since late 2020. At the core of the issue is the SEC claiming that Ripple Labs is issuing and selling unlicensed securities to the public. Despite being sued by the SEC itself, Ripple Labs has denied any plans to settle out of court. The price has been moving more or less in sync with developments in this case, and any major update on the lawsuit could drastically influence the price. 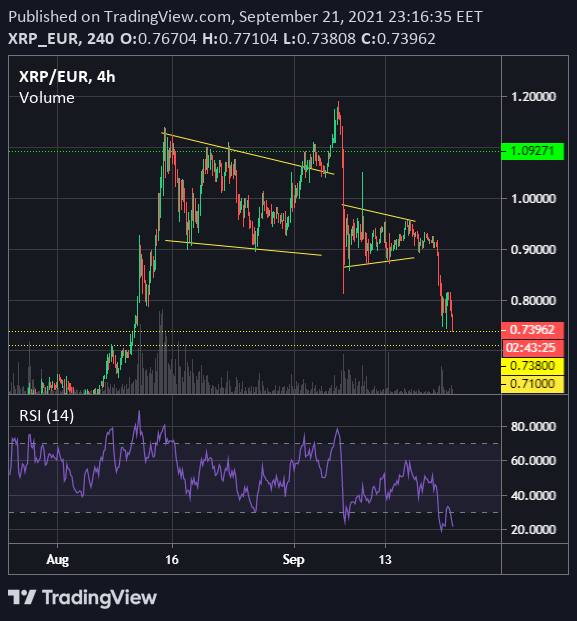 XRP’s price lost ground in recent days and is currently trading around €0.70, its lowest since mid-August.

Open blockchain platform TRON (TRX) was listed on Europe’s biggest stock exchange, the Deutsche Börse. The new product is an exchange-traded note (ETN) called VanEck Vectors TRON ETN (VTRX). Even though TRX’s price has been heading down recently because of overall corrections, a rebound can be expected. The listing is a positive development as it allows institutional investors to gain exposure to TRON. After this, the company behind the event has plans to repeat the listing on some other European exchanges as well. 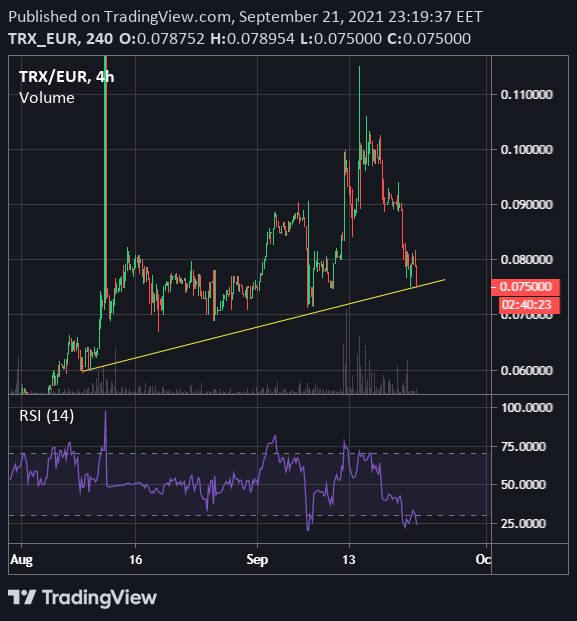 At the end of the week, it seems the crypto market is in a bigger correction phase, but this is not the first time this year. The May correction was even bigger and the market recovered almost fully. The next couple of days will determine the market’s direction as soon as price support levels are found. Overall, the performance of almost all large cryptos is still phenomenal this year and corrections such as this are just part of the usual market cycle.