This week turned into a complete rollercoaster for the cryptocurrency market following even more FUD coming from China. Bitcoin and major altcoins recovered a large part of the losses resulting from China's regulatory crackdown on the 24th of September before dipping again on Monday.

- Chinese crackdown has taken down the Ethereum mining pool “Sparkpool”

- Cardano (ADA) has announced a strategic partnership with Chainlink (LINK)

This week turned into a complete rollercoaster for the cryptocurrency market following even more FUD coming from China. Bitcoin and major altcoins recovered a large part of the losses resulting from China's regulatory crackdown on the 24th of September before dipping again on Monday. The result was range trading inside a large falling wedge that BTC had been forming since the start of September.

The crypto markets have mostly absorbed the news-based selling that started a week earlier with developments surrounding Evergrande, suggesting that long-term investors are likely using the dip to accumulate. The Crypto Fear & Greed Index is hovering just above 20 points which indicates extreme fear among investors.

Bitcoin’s price was moving in a range between €34,000 and €38,000, with most altcoins following the pattern. An announcement of more negative regulatory efforts in China sent BTC back to the lows of the support level as the entire market lost billions in a matter of hours. The latest news coming from the country indicated that all cryptocurrency trading is banned. 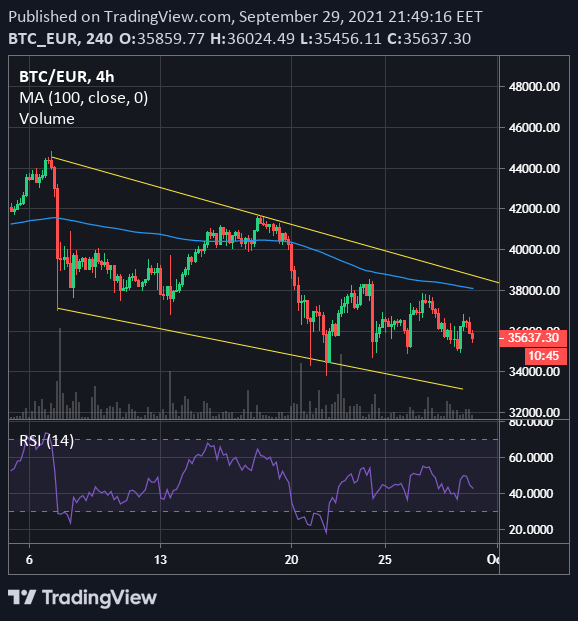 China has cracked down on cryptocurrencies multiple times in the past, and almost every time, the prices went down but quickly recovered. The price drop was significant, but it’s worth noting that long-term, on-chain data remains firmly positive, potentially indicating that this might be a buy-the-dip opportunity once Bitcoin’s price finds support.

Bitcoin’s market cap dropped below €800B, while its dominance approached 43% as most altcoins suffered even more. Despite this, the fundamentals remain strong and positive news keeps pouring into the market. In the middle of this, social media giant Twitter announced its plans to begin with a Bitcoin tipping feature. Using the new feature, users will be able to tip their favourite content creators.

Chinese crackdown has taken down the Ethereum mining pool “Sparkpool”

Most major altcoins are trying to find support and are facing a sell-off at higher levels, suggesting that the market could remain range-bound for a few more days. ETH’s price got pushed down from €2,700 again and is now still struggling to move to upper resistance in a wedge formation. 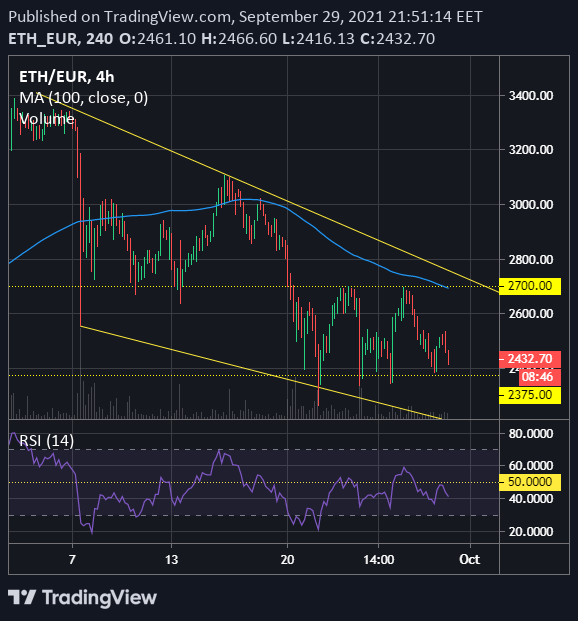 The ETH mining pool Sparkpool has announced that it has stopped accepting new participants in Mainland China. Furthermore, the organisation has shut down all its activities in China as of the 30th of September. Based in Hangzhou, China, Sparkpool is the second-largest Ethereum mining pool responsible for more than 20% of the network’s total hash rate.

The Royal Monetary Authority of Bhutan is partnering with Ripple to pilot a digital currency by the central bank in the kingdom. Ripple Labs will enable Bhutan to use a private ledger CBDC solution which would allow their central bank to deploy a digital currency. Ripple’s CBDC solution leverages a private version of the public, open-source XRP Ledger that allows greater control over issuance, management, privacy and validation than a public blockchain would.

In addition to this huge news, Ripple Labs also announced that it is moving into the growing NFT world. The payment processor company will open a new fund worth €215M to support the building of non-fungible token (NFT) projects on its XRP ledger. XRP price is moving similarly to major altcoins and is simply following Bitcoin in range trading. 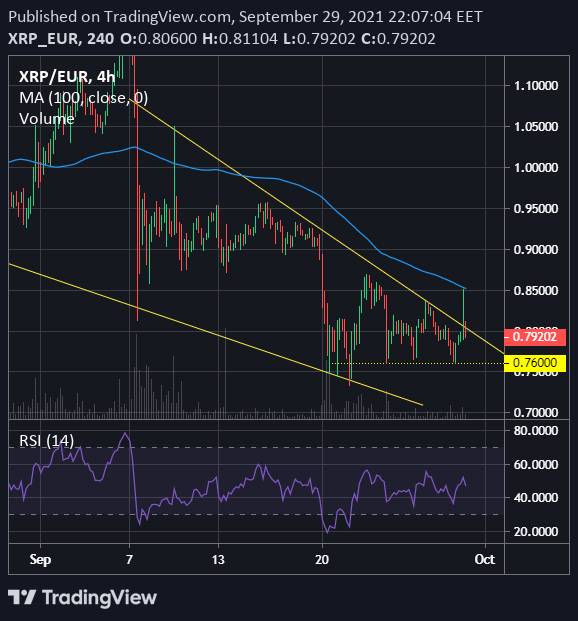 The price has tested the support level at €0.76 several times but bulls were rejected in attempts to move it higher.

Cardano (ADA) has announced a strategic partnership with Chainlink (LINK)

It was a very important weekend for the Cardano (ADA) community as they gathered at the Cardano Summit 2021. InputOutput (IOKH), the technology company behind Cardano, has announced a strategic partnership with Chainlink (LINK) to provide oracle integration for smart contract developers. The partnership will see Cardano integrate Chainlink’s oracles to support developers as they prepare to start building smart contracts for decentralised finance (DeFi) applications.

The summit has ushered in several announcements and strategic partnership deals between Cardano and other entities. In a major event, Cardano partnered with one of the largest Telecom services in the United States of America - DISH telecom services, a Fortune 500 company with over 19M customers. 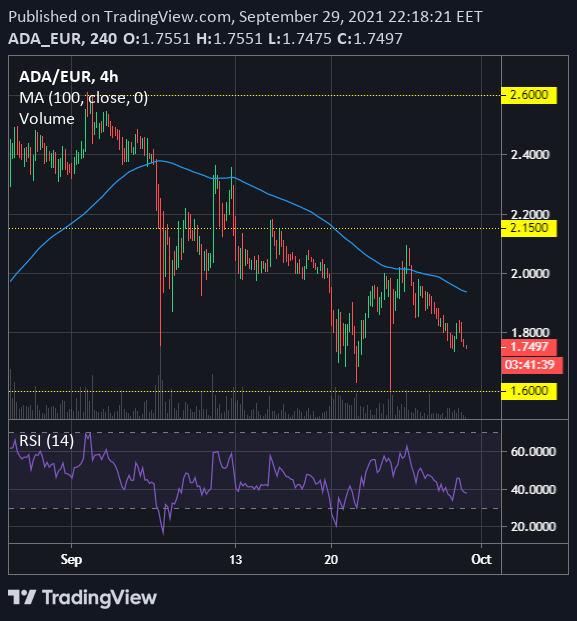 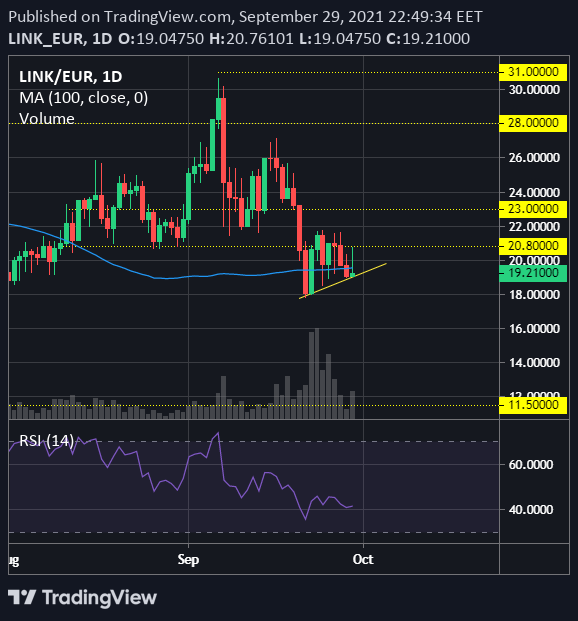 Despite this rollercoaster month, overall sentiment remains bullish on a higher time frame and there is no sign of any bear market yet. Fundamentals remain strong and the technical picture is still bullish. Major tops in the market occur when overall sentiment turns extremely bullish, funds are fully deployed and where greed is at the highest level. None of this is happening, which suggests cryptos have further upside potential. Have you been following price developments and formations and want to act on the market moves on the go? Make sure you trade using our Bitpanda Pro iOS and Android apps.