It’s been a green week across crypto space as positivity and big gains returned to the market. The strong rally of Bitcoin in the past few days boosted sentiment and pushed the biggest cryptocurrency by market cap to €50,000, the highest level since mid-April.

-   Bitcoin’s in the spotlight with its dominance up to 46%

-   The U.S. became a world leader in Bitcoin mining

-   BTC extended its lead over Etheruem

-   XRP and XLM with huge gains

-   Polkadot is ready to launch parachains

Bitcoin’s in the spotlight with its dominance up to 46%

It’s been a green week across the crypto space as positive sentiment and big gains returned to the market. Bitcoin’s strong rally  over the past few days boosted market sentiment and pushed the biggest cryptocurrency by market cap to €50,000, its highest level since mid-April. Bitcoin is still reigning high above any other crypto with nothing else close to matching its performance as funds have been moving from altcoins to Bitcoin recently. Also, Bitcoin’s dominance increased to 46% from 40% over the last 2 weeks as it reached a market cap of €0.9T again. 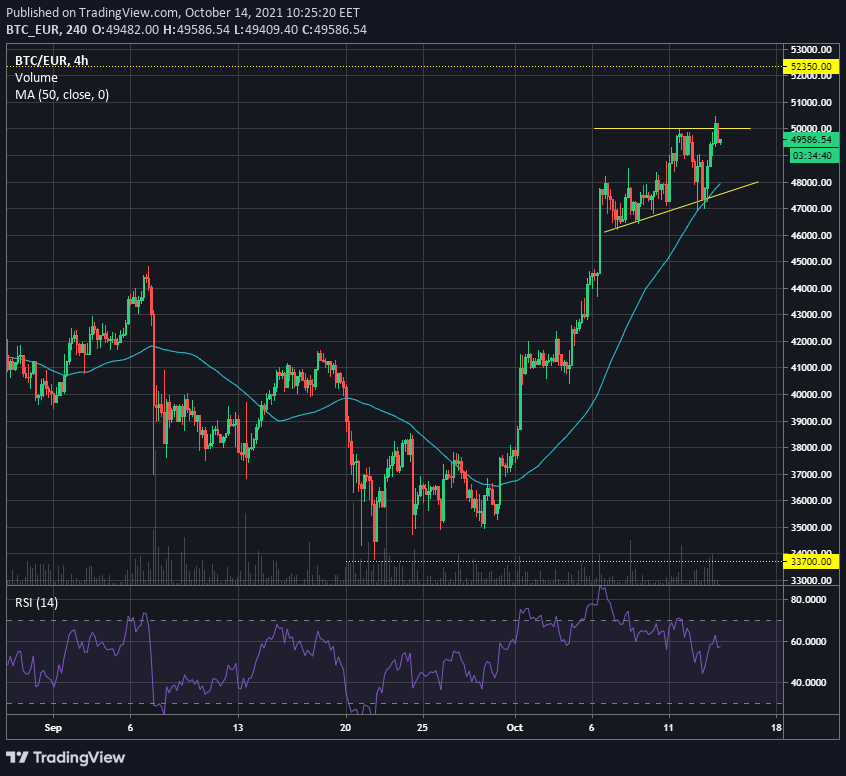 Bitcoin closed with the strongest weekly candle in the last 22 weeks - just some 10% off from its ATH which is an impressive 100% recovery from its May plunge. This past performance shows that any regulatory action by China had only a temporary effect.

The U.S. became a world leader in Bitcoin mining

The U.S. has become the world’s leader in Bitcoin mining following the crackdown on the industry in China according to the Cambridge Centre for Alternative Finance (CCAF). The latest CCAF data shows the U.S accounts for 35.4% of the global hashrate - the world’s total computational power used to mine BTC - which is more than double the 16.8% recorded at the end of April. Kazakhstan and Russia followed the U.S. with shares of 18.1% and 11%, respectively, up from 8.2% and 6.8% in April. According to data, China’s dominance of the Bitcoin mining industry peaked at over 75% in September 2019, meaning the mining industry now is more distributed around the world than it used to be.

ETH lost a bit of its advantage to BTC

The strong rally of Bitcoin was in the spotlight and has placed altcoins on the sidelines as traders were shifting funds to BTC. ETH’s dominance fell under 18%, but the price climbed above €3,000, which marks a 120% recovery from the May plunge. 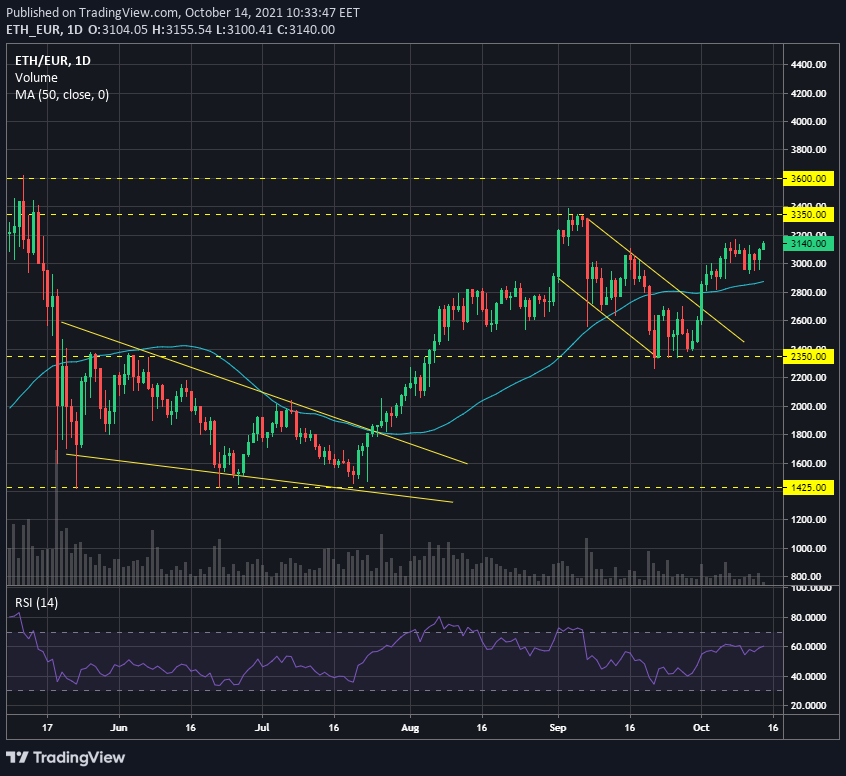 ETH’s price is now hovering towards a September high at €3,350 which is the last resistance before the all-time high €3,600 level, reached on the 12th of May this year.

XRP and XLM with huge gains

Last week, Ripple played some strong hands in its longstanding legal battle against the SEC. The price of XRP, the seventh-largest cryptocurrency by market cap, blew up in the middle of the week by 9% and hit €1, its highest price since the beginning of September. The rise was likely boosted by several strong moves made by Ripple in the tenth month of its courtroom battle against the United States Securities and Exchange Commission (SEC). 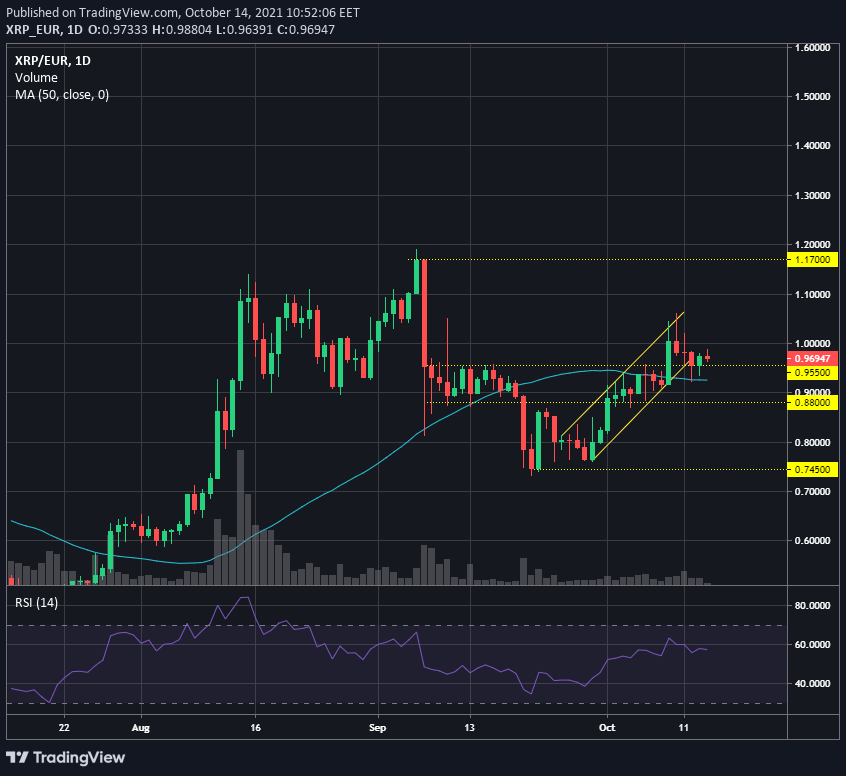 XLM shot up by some 10% on Wednesday and by almost 50% over the last two weeks which makes it one of the best performing assets among the top 30 crypto by market cap. XLM’s bullish momentum is parallel with exponential growth in its ecosystem. 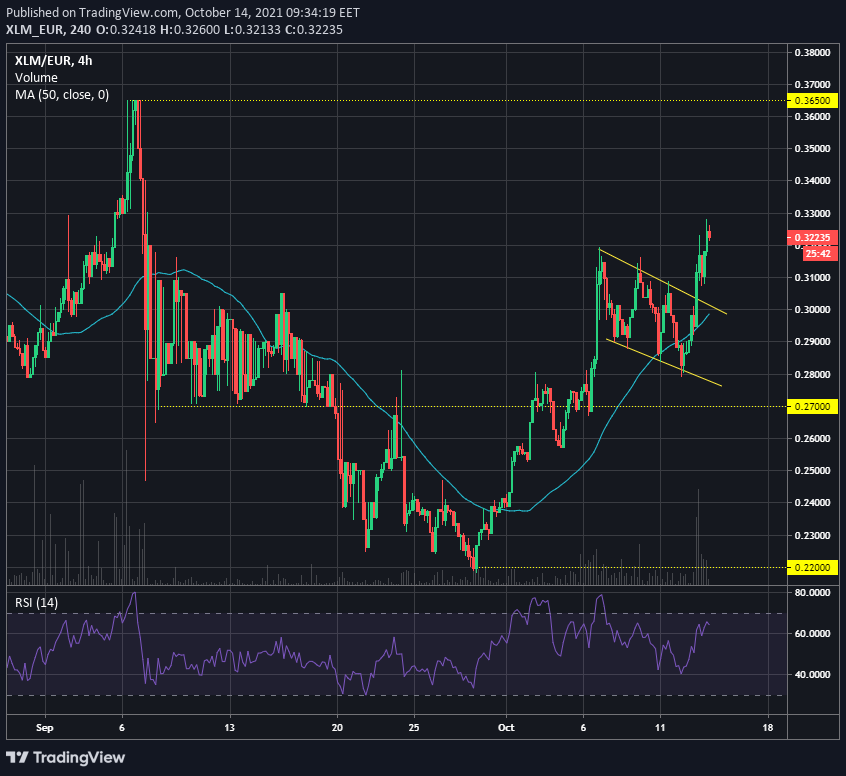 According to the Stellar Development Foundation (SDF), the network made significant developments in Q3, 2021. In addition, it managed to secure an important partnership with payment giant MoneyGram, which will allow users to connect their wallets to the company’s global retail platform. Thus, consumers will be able to leverage cash funding and payouts in USDC with Stellar to (potentially) settle a transaction instantly. In that sense, the network has expanded its main use case and its capacity to onboard millions of new users into its network.

Polkadot is ready to launch parachains

The price of DOT rose by 25% in a single day as part of a 36% gain over the last week, passing the €35 level. That's the highest price DOT, Polkadot’s native token, has managed to reach since May when it reached an all-time-high of €40. 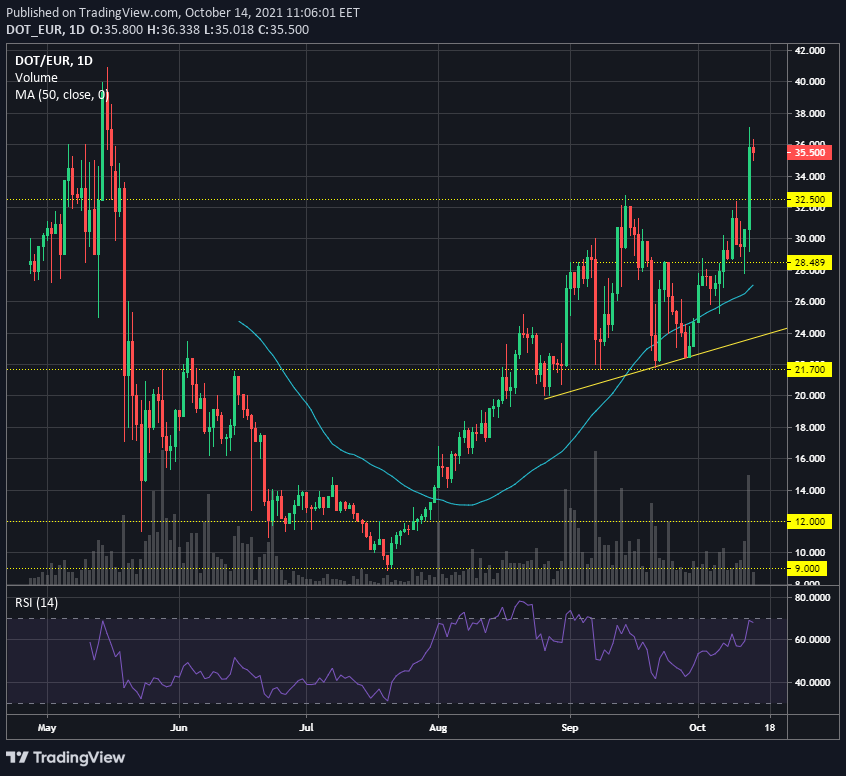 Parity Technologies, the engineering team behind Polkadot, announced that the project is ready to launch parachains. Parachains are blockchains that run alongside the main network, but are interconnected with each other. Up until now, parachains have been auctioned only on Kusama, Polkadot’s “canary network” for testing and development. The launch of parachains represents the final piece of core technology outlined in the Polkadot Whitepaper, and their launch marks the last stage of Polkadot’s multi-phase launch process.

Have you been following price developments of Bitcoin or the smaller caps’ formations and want to act on the market moves on the go? Make sure you trade using our Bitpanda Pro iOS and Android apps.