November has started the same way as October – bullishly. Bitcoin climbed up the monthly chart and the weekly chart looks positive, suggesting November could also be a bullish month.

-    CHZ token doubled in price over first ever NFT campaign

November has started the same way as October – bullishly. Bitcoin climbed up the monthly chart and the weekly chart looks positive, suggesting November could also be a bullish month. Bitcoin closed the month with some 40% gains, one of its best months since December 2020. Major altcoins followed the surge and several posted double digit gains last week.

Bitcoin celebrated its 13th anniversary on the 31st of October. This event changed the financial world as we know it. The BTC price is moving in a bound range, a few thousand euro under the all-time-high of €57,000. Intraday volatility is completely normal after such a bullish month, but the higher time frame is looking solid for now. 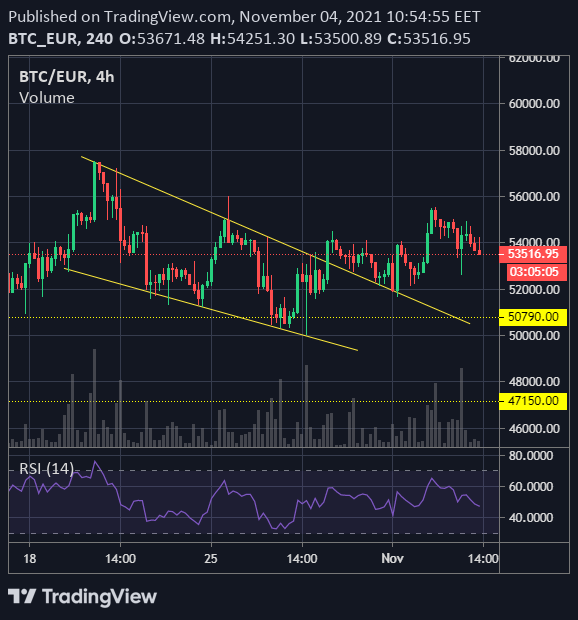 The Bitcoin price turned slightly negative in the middle of the week in response to news that the Fed would taper inflation. The central bank has announced that it will scale back its monthly bond purchase programme starting this month. The crypto market is more integrated into the world economy everyday which only shows how important it is for bigger institutions but on the other hand, is also under pressure from macro events.

This week, Ethereum was on stage as the second biggest crypto by market cap tapped the new peak of €4,000. 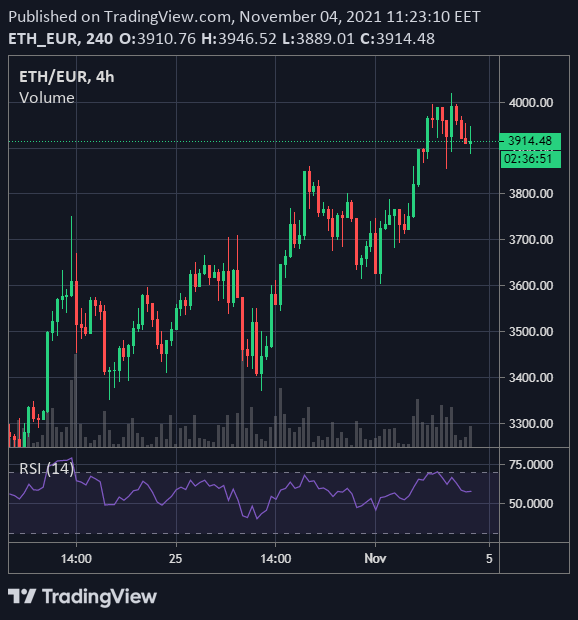 The world’s largest smart contract network has added some 10% over the past seven days and it is up by around 35% for the past month. The new price record coincides with an all-time-high for Ethereum’s hashrate, the measure which shows the processing power of the Ethereum network which hit 813,533.6271 GH/s. Ethereum reserves on exchanges have dropped more than Bitcoin recently. This suggests investors are holding ETH and using it to generate yields in DeFi. Some more positive news supporting the recent price surge is also Ethereum’s monetary economic model, which has actually been deflationary over the past week, because more ETH has been burnt by EIP-1559 than has been mined.

CHZ token doubled in price over first ever NFT campaign

CHZ almost doubled in price over the weekend as the Fan Token platform announced AC Milan will launch the first ever NFT campaign on the Socios app. The price surged intraday to €0.54 before declining back to around €0.38. 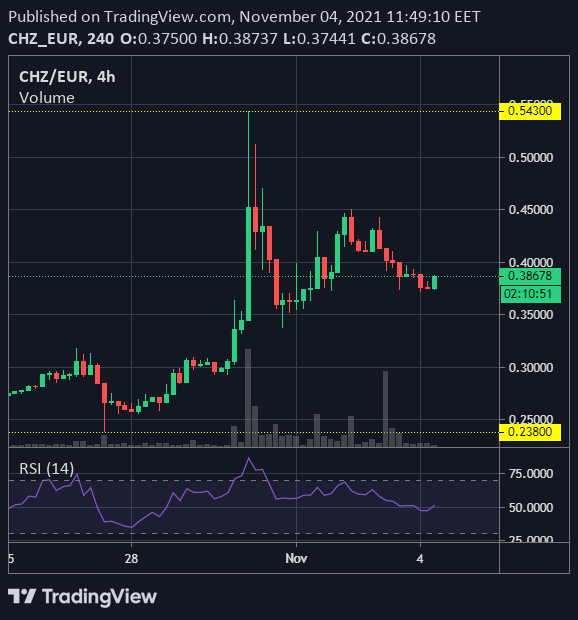 Serie A giants AC Milan become the first of Chiliz 100+ elite sports partners to launch an NFT campaign on the fan engagement and rewards app Socios.com. 100 limited edition NFTs were minted and dropped to $ACM Fan Token holders. NFTs minted for Socios.com partners will be tradable on any Ethereum based NFT marketplace. The event also increases anticipation for the upcoming launch of Chiliz Chain 2.0 that will enable whitelisted smart contract developers to mint NFTs and Fan Tokens. Chiliz Chain 2.0 will use $CHZ as its native token, meaning that all transaction fees will be in $CHZ.

The native token of the Polkadot blockchain, DOT, surged to a new all-time-high price of €46 as the highly-anticipated parachain auctions for the network approach. 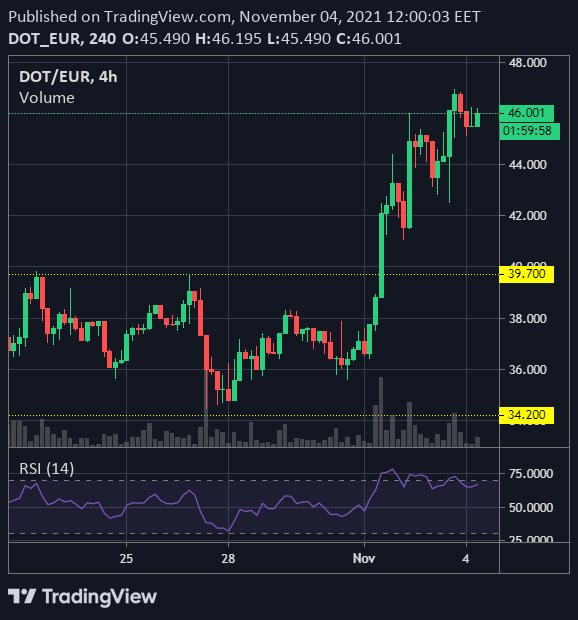 The bullish momentum has pushed DOT prices up by over 50% in the past month to 8th place among biggest cryptocurrencies on the market. The Polkadot blockchain is currently valued at around €36B, only slightly behind XRP. The long-awaited launch of parachains will start on the 11th of November.

The number of ADA wallets has surged to over two million, a two-fold increase compared to May 2021. In September, ADA surged to an all-time-high of €2.60, prior to the launch of the smart contracts, but declined afterwards. The price is currently trading some 36% down from ATH and lagging behind most major altcoins, but the fundamentals are very positive, which could turn price movement around from bearish to bullish. 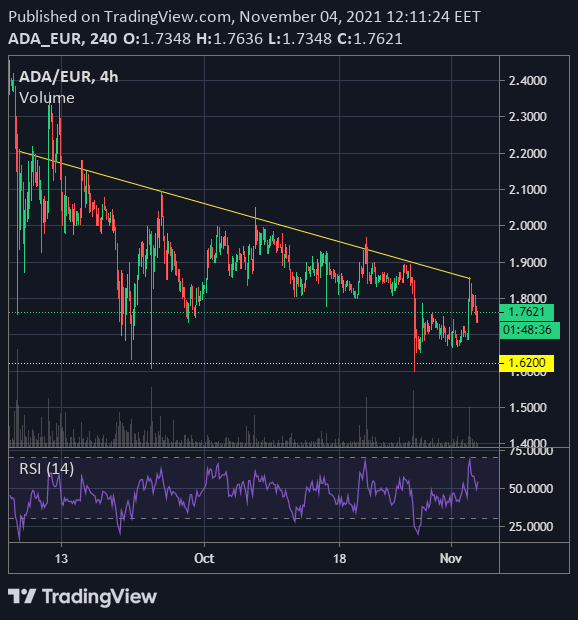 The Chainlink ecosystem added more than 100 integrations in just over a month, reaching more than 900 total integrations. LINK is moving bullishly towards €30 level and is currently the 15th biggest cryptocurrency by market cap. 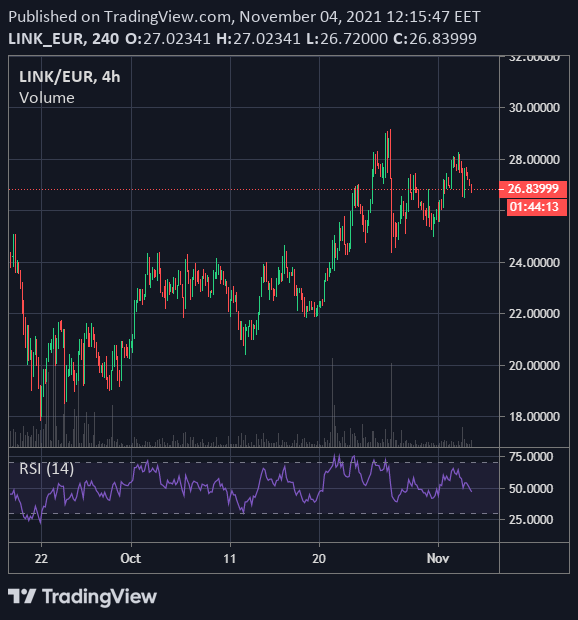 The eighth BEST token burn has been completed and 17,309,742 BEST with a total value of €14,358,803 has been burnt. The token has seen a rapid increase from the end of September and has reached €1 level for the first time since mid-August. 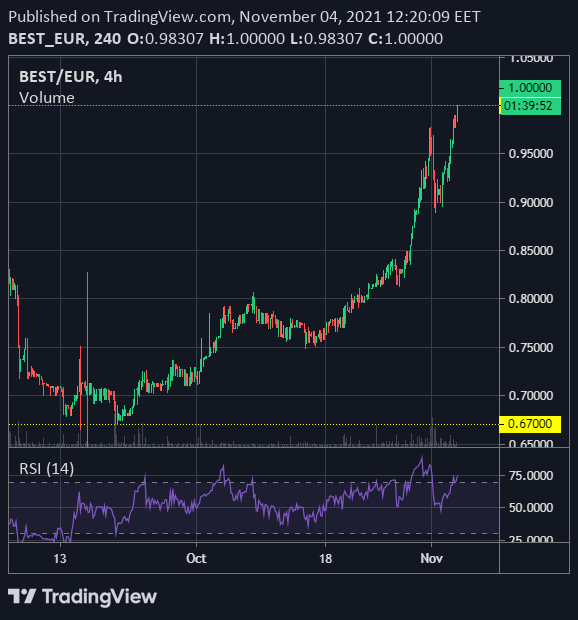