It was a very dynamic week in the cryptocurrency space with new all-time-highs for several coins.

The total market cap for all crypto-assets has tapped a record high of €2.6T, bringing the aggregate crypto market to nearly a quarter of the size of the entire gold market cap which stands at some €10T. Positive market momentum has pushed the total cap up by 8% over the past seven days and 25% over the past 30 days. Bitcoin also reached a new all-time-high of a little less than €60,000 on Wednesday afternoon passing the €1T level and is up some 140% since its July low. 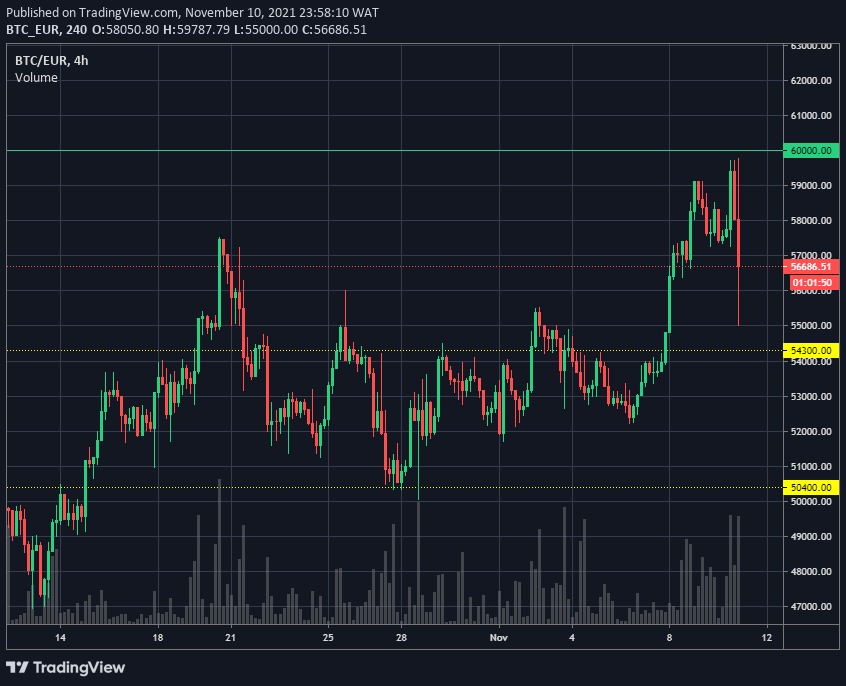 On Wednesday evening, the crypto market experienced another flash crash, which liquidated some €700M positions within minutes. The rest of the market also tumbled as the total capitalisation lost a little under €200M in the process. This is nothing new and completely normal for all-time-high levels. Volatility will remain high, but the overall market is still bullish. 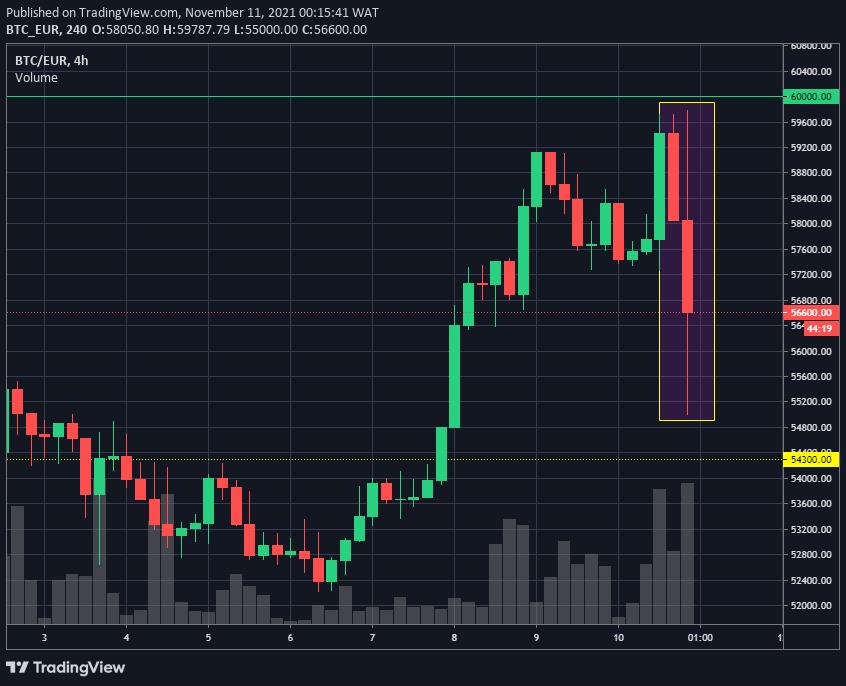 The Bitcoin protocol will undergo a soft fork in the name of the Taproot upgrade, which aims to improve the network’s privacy, efficiency and smart contracts capability. Taproot is scheduled for next week when block 709,632 is reached and comes more than four years after the last major Bitcoin upgrade. The Taproot update comes in times when the cryptocurrency market is trading at all-time-high levels. The bulls may have some power left to push the market higher as a result of the upgrade to the network. Taproot makes Bitcoin better through a better network efficiency and higher levels of privacy for transactions, which may unlock a much higher price. Bullish bias is still sustainable, given the current Fear & Greed Index level is at 84/100, but is still not the highest level that has been seen.

Ethereum’s price reached new all-time-high levels of €4,200. The world’s second-largest cryptocurrency by market cap is currently valued at some €490B and has risen 540% since the beginning of the year. 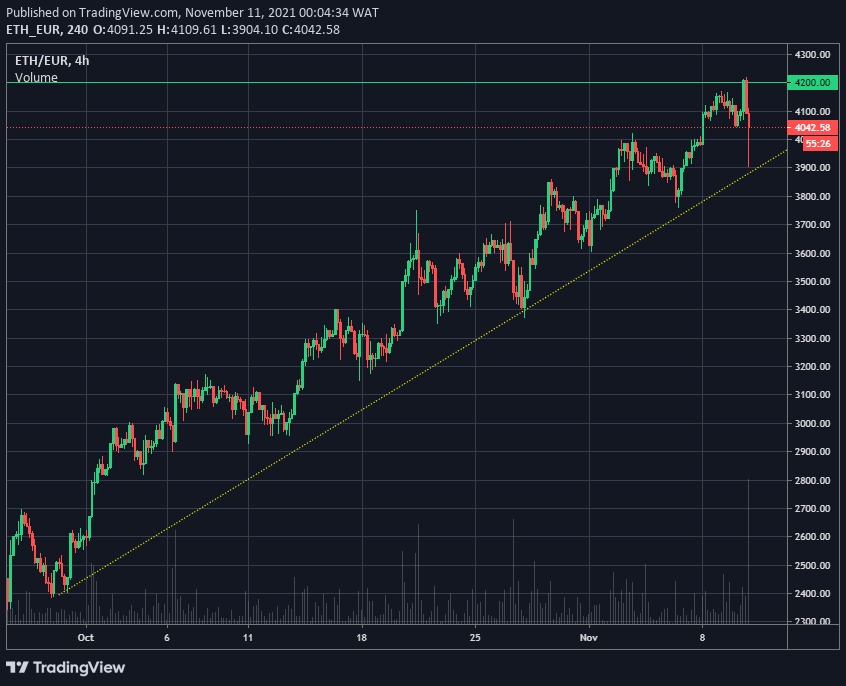 Ethereum’s hash rate has also hit a new peak according to on-chain data. This is the first time the Ethereum hash rate has reached 1 EH/s having surged from the previous ATH of 876 TH/s on the 2nd of November. Ethereum’s mining difficulty is also currently at its highest ever levels.

XRP was among the top movers in November with some 20% gains. Ripple, the company behind XRP, announced it will launch the Liquidity Hub in 2022, allowing its clients to also buy other crypto in addition to XRP. The Liquidity Hub will launch next year and allow clients to buy and sell Bitcoin, Ethereum, XRP, Litecoin, Bitcoin Cash and Ethereum Classic. 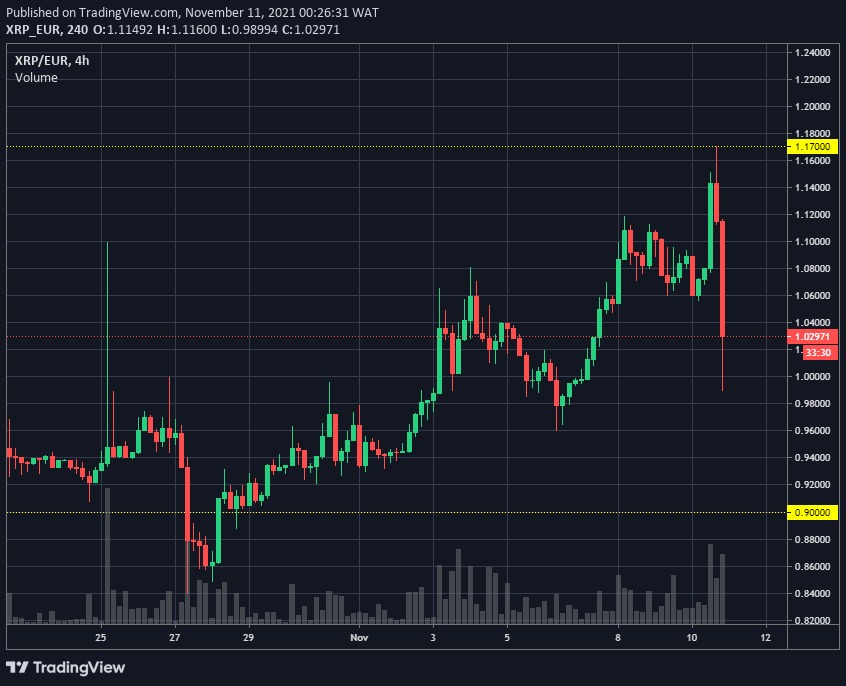 The so-called hub will plug into Ripple's existing "On Demand Liquidity" platform, which lets banks, market makers and other financial institutions carry out cross-border payments using XRP if they choose. Ripple also announced that it plans to offer crypto staking and investment services, as well as other products associated with the fast-growing world of decentralised finance (DeFi).

Litecoin increased at an accelerated rate last week. The upward movement took it above its September highs and has so far led to a high of €255, which amounted to an increase of some 50% in just three days. 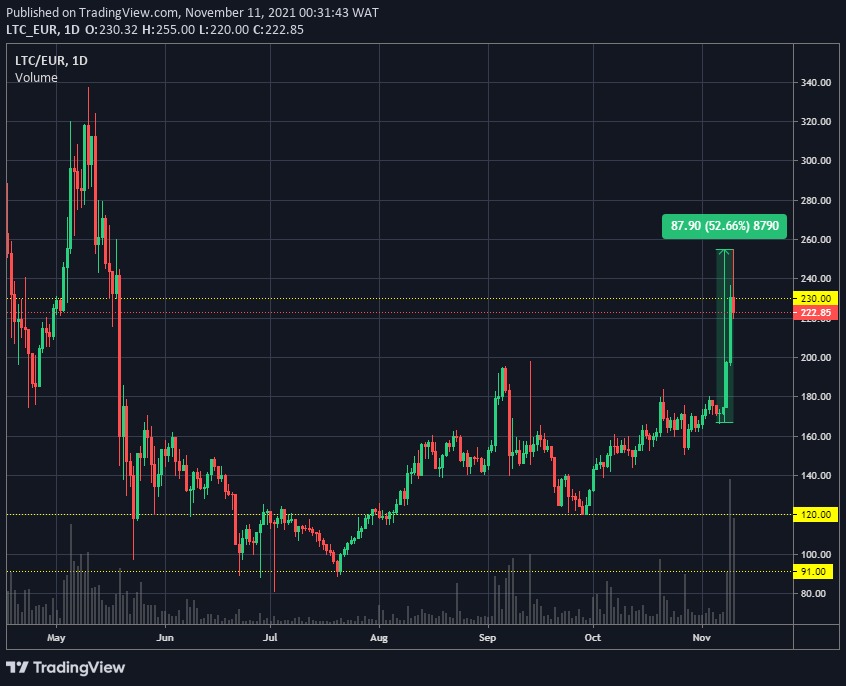 LINK was a noticeable mover

Chainlink was one of the best performers last week. LINK has been moving bullishly from mid-September and has added some 30% in November alone. LINK is trading around €30 level, highest since May. 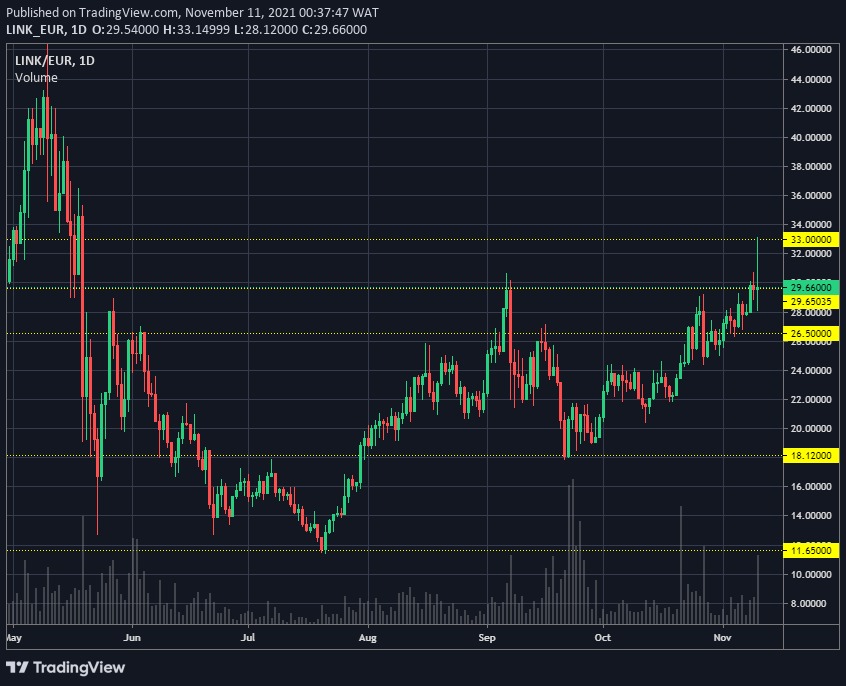 Aave started to exchange hands on Bitpanda Pro at the start of November. Aave is a decentralised finance protocol that allows people to lend and borrow crypto. Lenders earn interest by depositing digital assets into specially-created liquidity pools. Borrowers can then use their crypto as collateral to take out a flash loan using this liquidity. Aave was originally known as ETHLend when it launched in November 2017, but the rebranding to Aave happened in September, 2018. 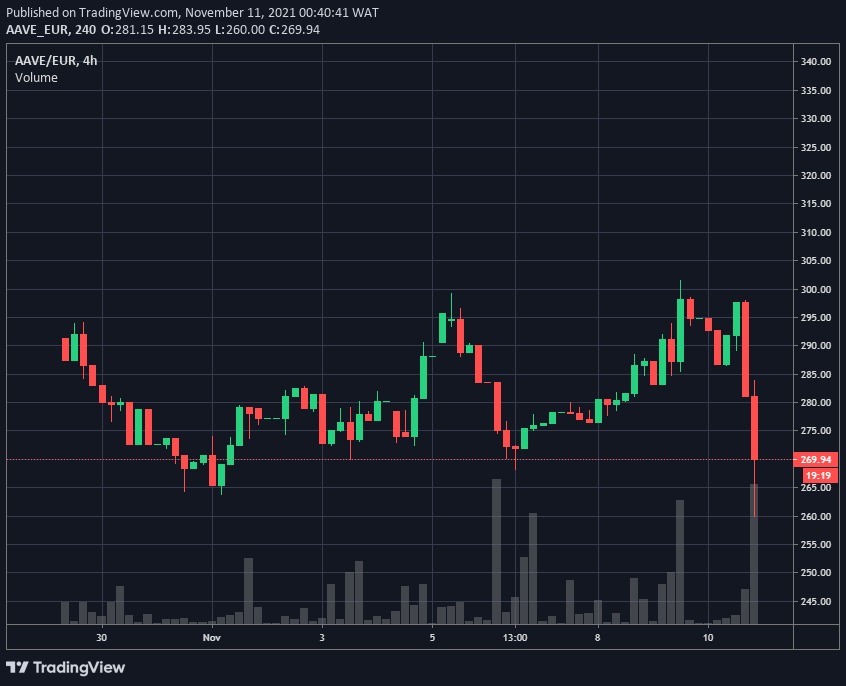