The crypto market lost ground in the middle of the week as Bitcoin logged its worst daily performance since September.

-       TRON trading with large gaps between highs and lows

BTC price slid some 12% to below the €53,000 level, down some 16% from all-time-high. However, this flash crash did not change the big picture as the market is still trending higher, also seen from the chart pattern as BTC is trading in range, printing higher lows, higher highs candles. The latest dip erased some €300B from the total market cap which now stands at €2.3T. BTC holds the number one spot with a cap close to €0.9T. Emotions and sentiments are driving the market at the moment and the Crypto Fear & Greed Index fell 22 points, to 52/100, marking the neutral level. A week ago, this number was at extreme greed, a typical first indicator of an overheating market. The drop seems to be related to excessive leverage in the system being flushed out. On-chain fundamentals did not change, suggesting the medium-term outlook remains bullish. 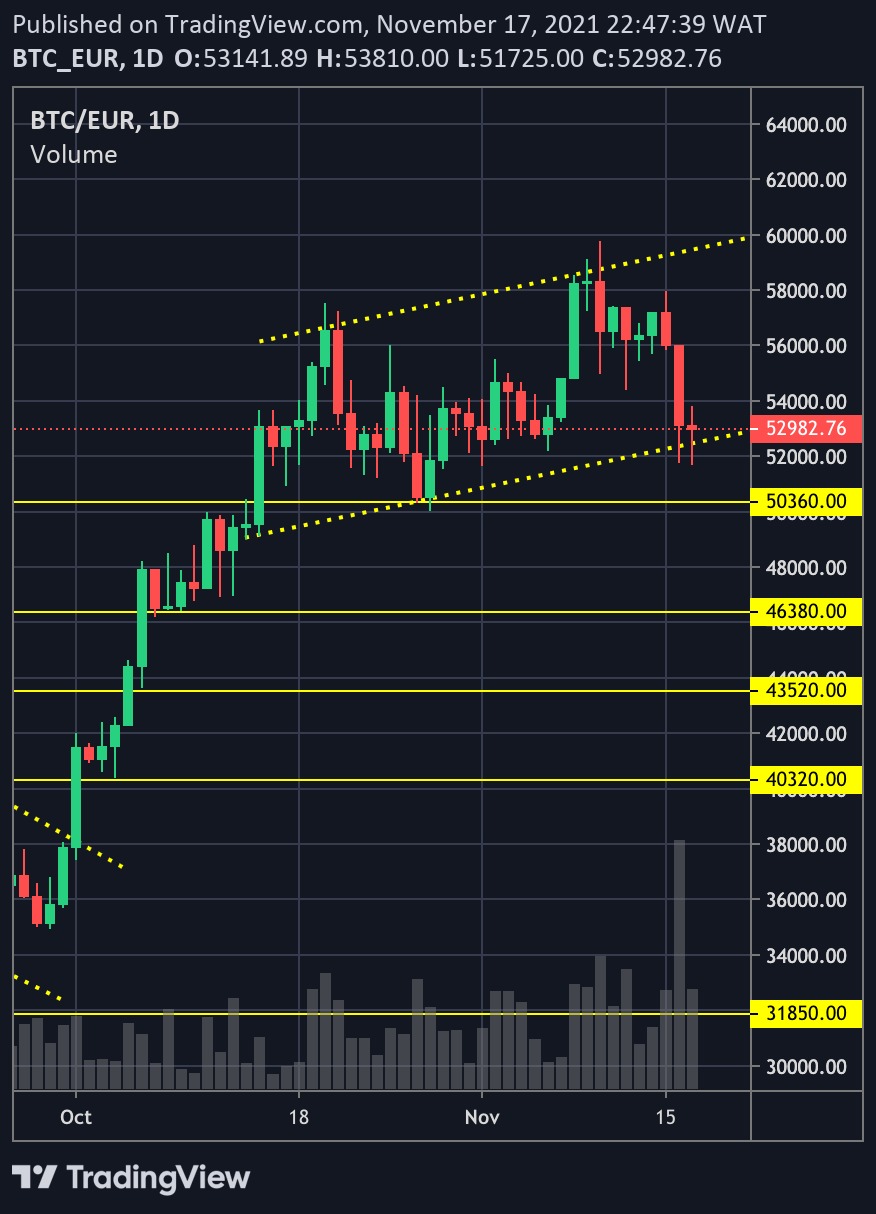 Bitcoin’s long-awaited Taproot upgrade, which is said to be the cryptocurrency’s biggest upgrade in four years, went live when the blockchain reached block 709,623 at 5:15 UTC on Sunday. Taproot tackles the problem of user privacy as both regular and multisig transactions will look the same. It will also improve network scalability and the fungibility of all Bitcoins.

Over the past week, ETH receded from its previous all-time-high of €4,200 and even fell under the long-term trendline which was printing from October. The price traded at €3,600, its lowest since the beginning of the month. High wicks on daily charts suggest bulls are trying to support the price on these levels. 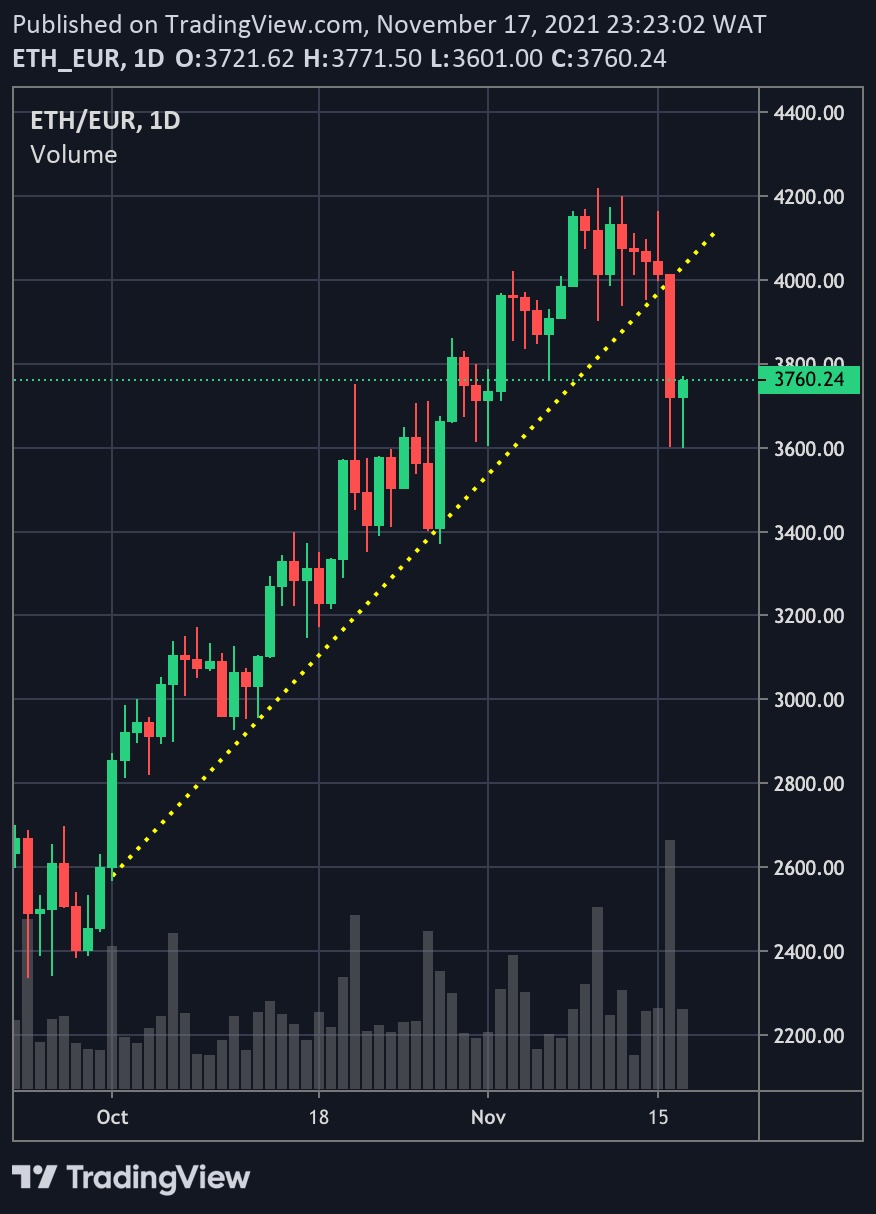 Despite this loss of momentum, the situation is not very concerning for ETH bulls as the fundamentals are showing positive signs. Some €8B in Ethereum was withdrawn from exchanges within the past few days, suggesting that whales may be accumulating and storing ETH with no intention to sell soon. Withdrawing tokens from exchanges is usually a bullish sign and vice versa. Also, ConsenSys, the Ethereum software company behind MetaMask, announced a €140M funding round as its wallet hit 21M monthly users.

TRON trading with large gaps between highs and lows

TRON has been one of the best-performing crypto assets in November so far as it gained some 25%. The price is hovering above €0.1, its highest for two months. The price reached almost €0.13 on an extremely volatile day where the price was moving 20% intraday. 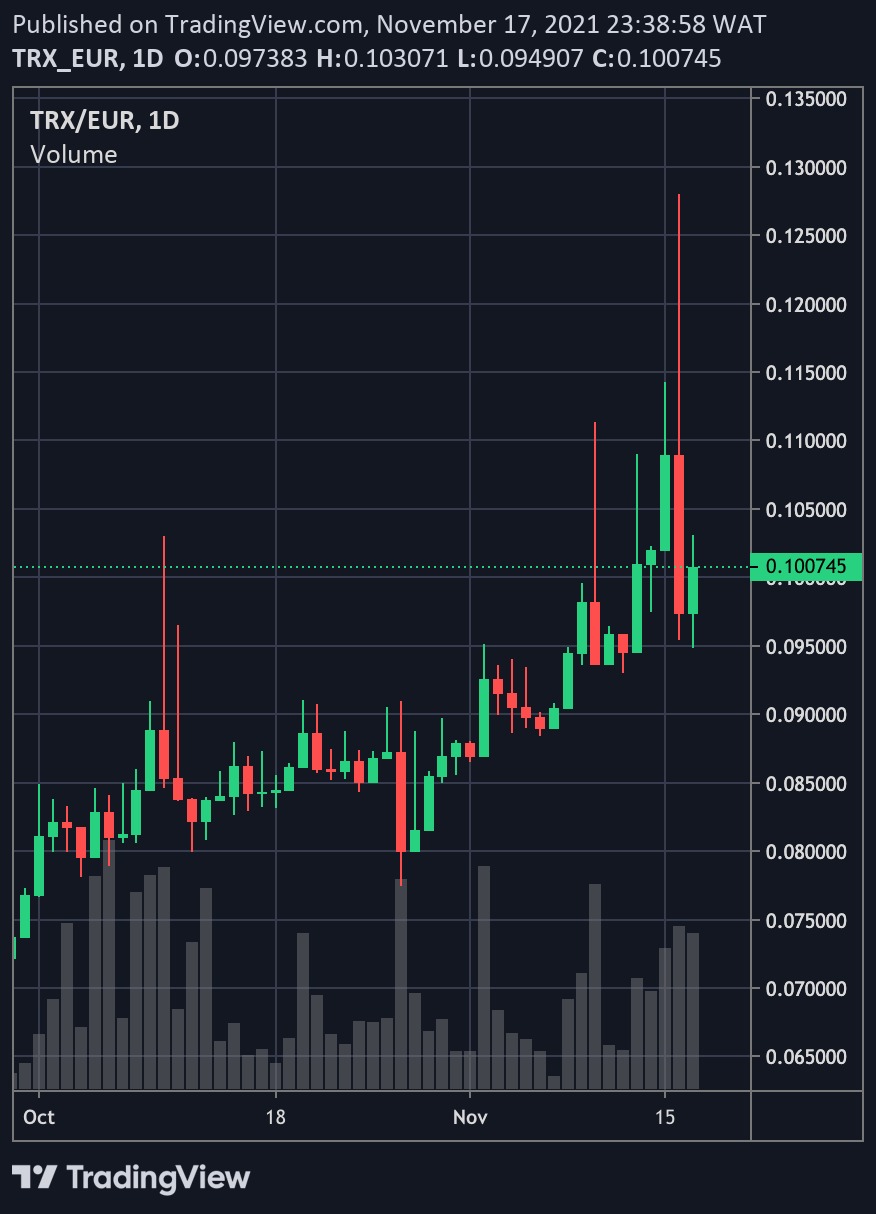 Most major altcoins are attempting to hold above their immediate resistance levels, a sign that bulls could be buying each dip. The flash crash left some scars on traders and they need some time to adapt to new price levels. Nevertheless, fundamentals remain strong and November is still bullish.