Both traditional financial markets and digital asset markets experienced a major sell off wave last Friday following the news that a more infectious variant of COVID-19, called Omicron, took hold in South Africa and some parts of Europe.

-       Ethereum is bullish and trading at its all-time-high price

-       MicroStrategy is the largest corporate owner of Bitcoin

Major selloff in light of a new COVID variant

As all markets are highly correlated, cryptocurrencies also got hit: Bitcoin lost some 10% in a single day, while some altcoins declined even more. The Omicron variant is hitting global markets as risk rises, putting pressure on some of the world’s most popular stock indices. However, the market rebounded over the weekend, with Ethereum being the star of the show as investors were increasingly turning to the second biggest cryptocurrency according to market cap.

Ethereum is bullish and trading at its all-time-high price

ETH’s price has rallied by more than 20% from its Friday low of €3,500 and is trading at an all-time-high price. The ETH/BTC pair has also broken out of an almost 7-month long consolidation range recently and has moved above 0.08 BTC on high volume, indicating bulls have some power left for an additional run. This breakout is essential because it represents a resistance line going back to the 2017 top when one ETH was 0.15 BTC. The monthly close of the ETH/BTC chart was the highest bullish close in 45 months. 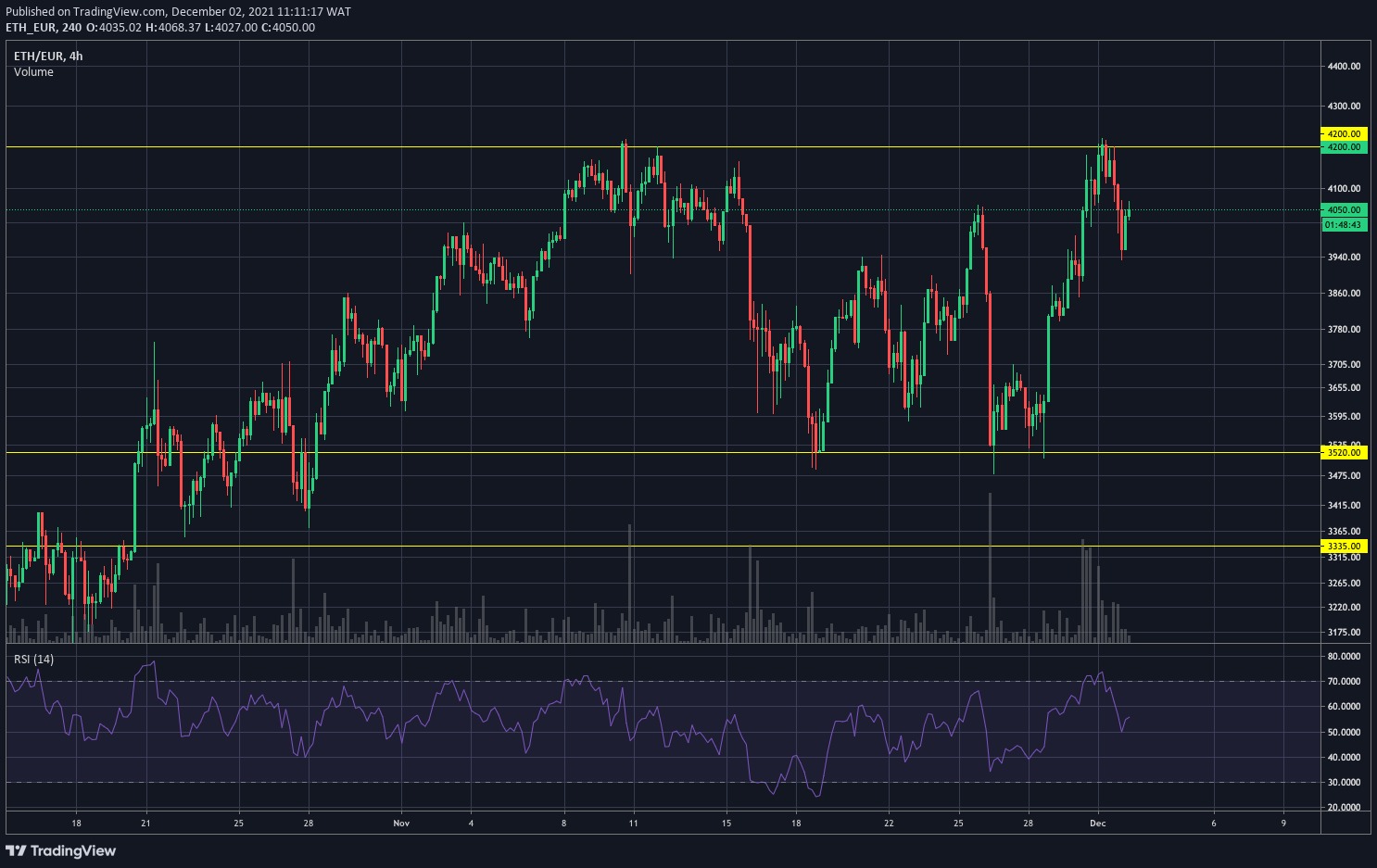 Volume increased as the price moved higher which is a bullish sign and a show of strength. Ethereum is outperforming Bitcoin by a large margin this year. Bitcoin's gain since January stands at approximately 90%, while ETH surged by a whopping 540% over the past 11 months. Ethereum also increased its market dominance to 22%, while it was under 10% at the beginning of the year. The number of active addresses on the network continues to climb while the net issuance of ETH continues to fall which might be the main reasons for its rapid rise.

Bitcoin closed the November monthly candle bearishly and it could take a few days for traders to digest the latest movements. The Crypto Fear and Greed Index stands at a low 33, indicating that market participants are still sceptical about another BTC rally. On the other hand, a bullish ETH month led the altcoin market to new heights. BTC recovered Friday's fall, but is still struggling to break out from the falling wedge pattern on the daily chart. 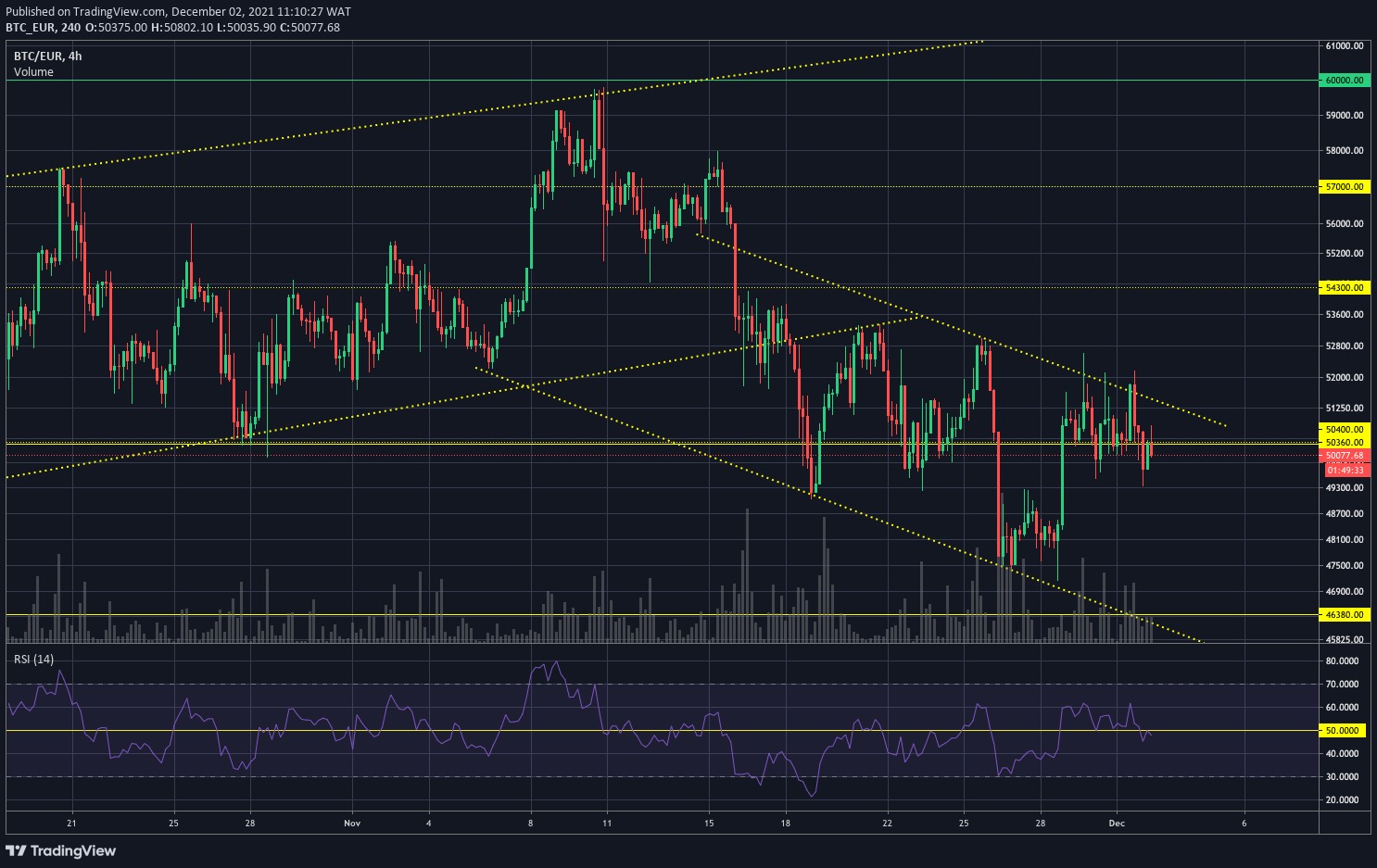 On the daily chart Bitcoin is gearing up for another attempt at moving above the €51,000 resistance area, which has so far rejected a breakout twice. The Relative Strength Index (RSI), which is a momentum indicator, is also increasing, but is still hovering under the 50 level, one often considered a threshold for a bullish/bearish trend. It has to move above this line to complete the correction.

MicroStrategy is the largest corporate owner of Bitcoin

NASDAQ-listed business intelligence firm MicroStrategy added a total of 7,002 bitcoins to its treasury for about €365M in cash during its fourth fiscal quarter. The move brings MicroStrategy’s total BTC holdings to 121,044 coins worth over €6B, making it the largest corporate owner of Bitcoin.

ADA touched €1.25, its lowest price since August, but bulls pushed the price back into the descending channel. Despite the price drop, Cardano is seeing a significant increase in users and transactions after it deployed the Alonzo upgrade in September earlier this year. 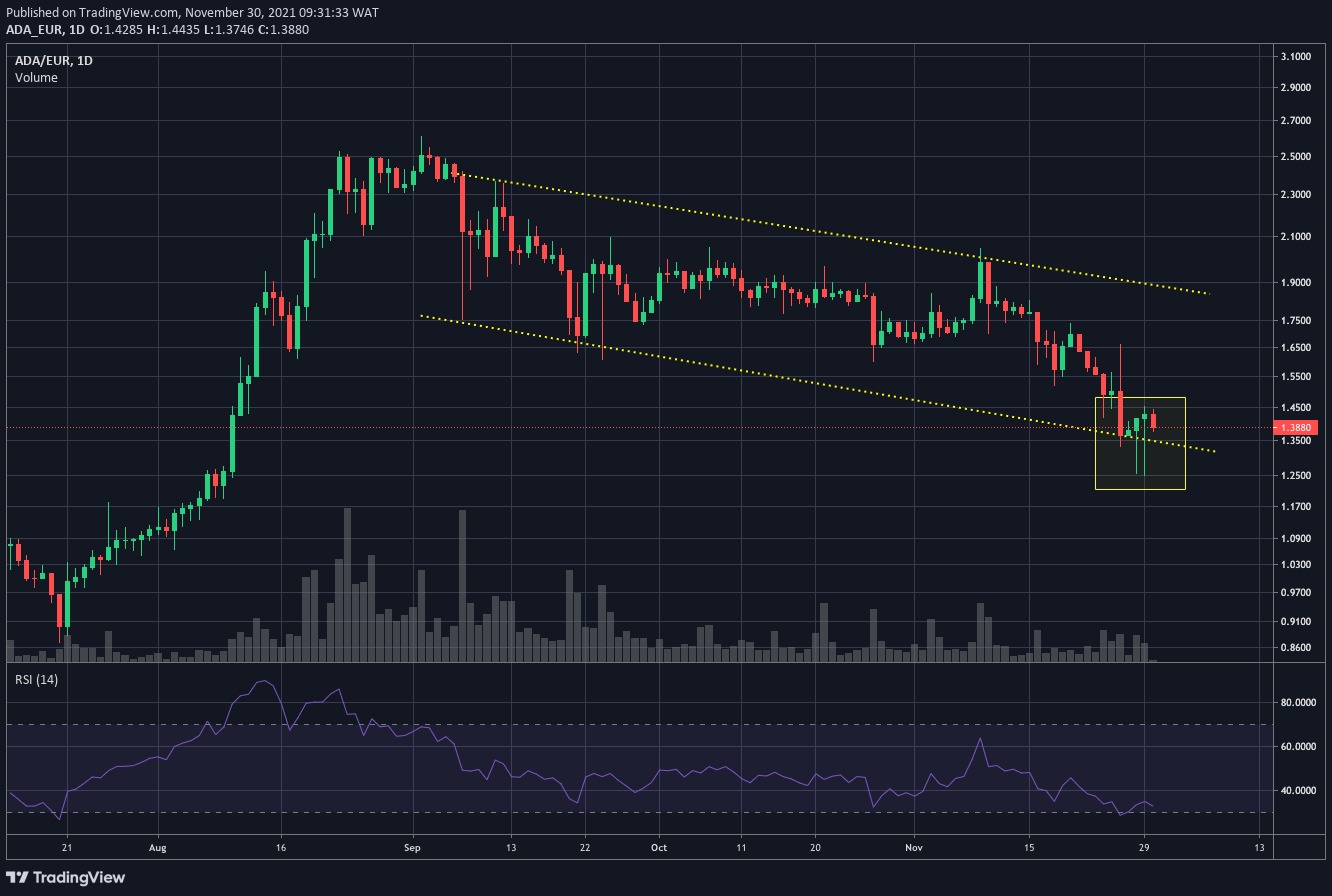 IOHK, the company behind Cardano, stated that the number of transactions has risen over twenty-fold in a year, from less than 10,000 per day in November 2020 to over 200,000 daily transactions nowadays. To accommodate the substantial growth in traffic, the company says it is increasing Cardano’s block size by 12.5%, from 8 kilobytes to 72 kilobytes. Larger block sizes mean that more transactions can fit into a block, thus providing greater capacity for users.