The past few days haven’t been extremely positive as the broader crypto market experienced another crash, resembling the one in May.

-       Ethereum reached its highest value against Bitcoin since February 2018

Fears over the spreading Omicron variant of Covid-19 added fuel to the fire, while overleveraged positions increased volatility and wiped most of the positions on the market out in a matter of hours. Around €1.8B was liquidated on Saturday morning alone which caused around 20% intraday correction in most liquid crypto-assets, while smaller cap altcoins dropped even more. 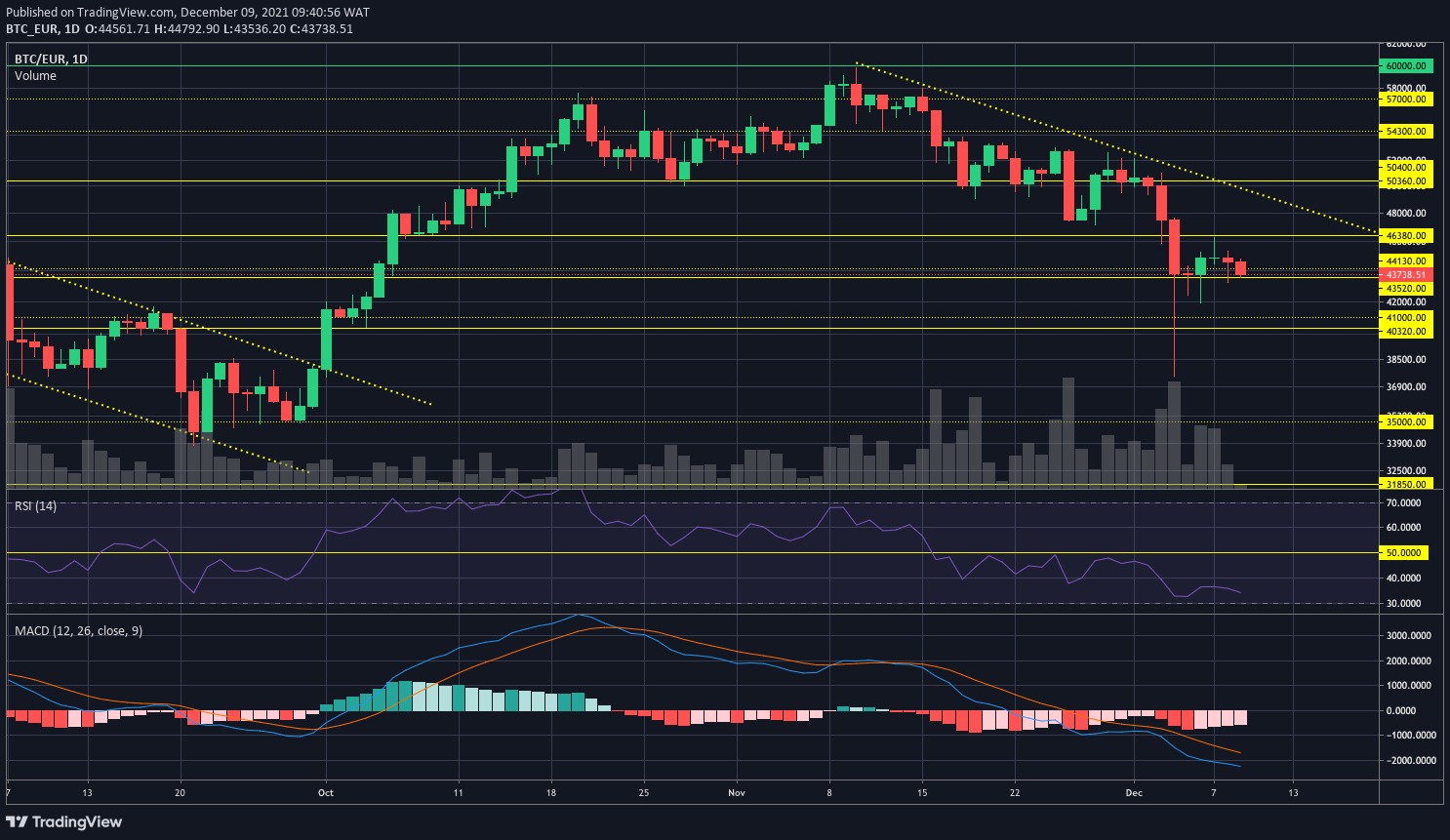 Bitcoin has been trading at the local bottom of €37,000, down 21% from Saturday, which was the third-strongest overnight dip in 2021. Despite rallying since Friday night's crash, BTC’s price is down more than 10% in the last seven days and close to 30% down from its all-time-high.

A crash very similar to the one in May

The crypto market is still largely led by Bitcoin's price movements, with Ethereum also contributing to dictating the wider market. Every big move made by these two assets is mirrored on the altcoin market, with increased volatility.

There are similarities to the May market crash where Bitcoin lost some 50% from top to bottom and other altcoins followed in the drop. The market quickly bounced back from the lows and recovered most of the losses in less than three months. Similarly to the recent drop, overleveraged positions increased volatility and wiped away most of the long positions. The market needs some time to recover in these situations and intraday charts are still volatile, but on the higher time frame, it is still bullish. 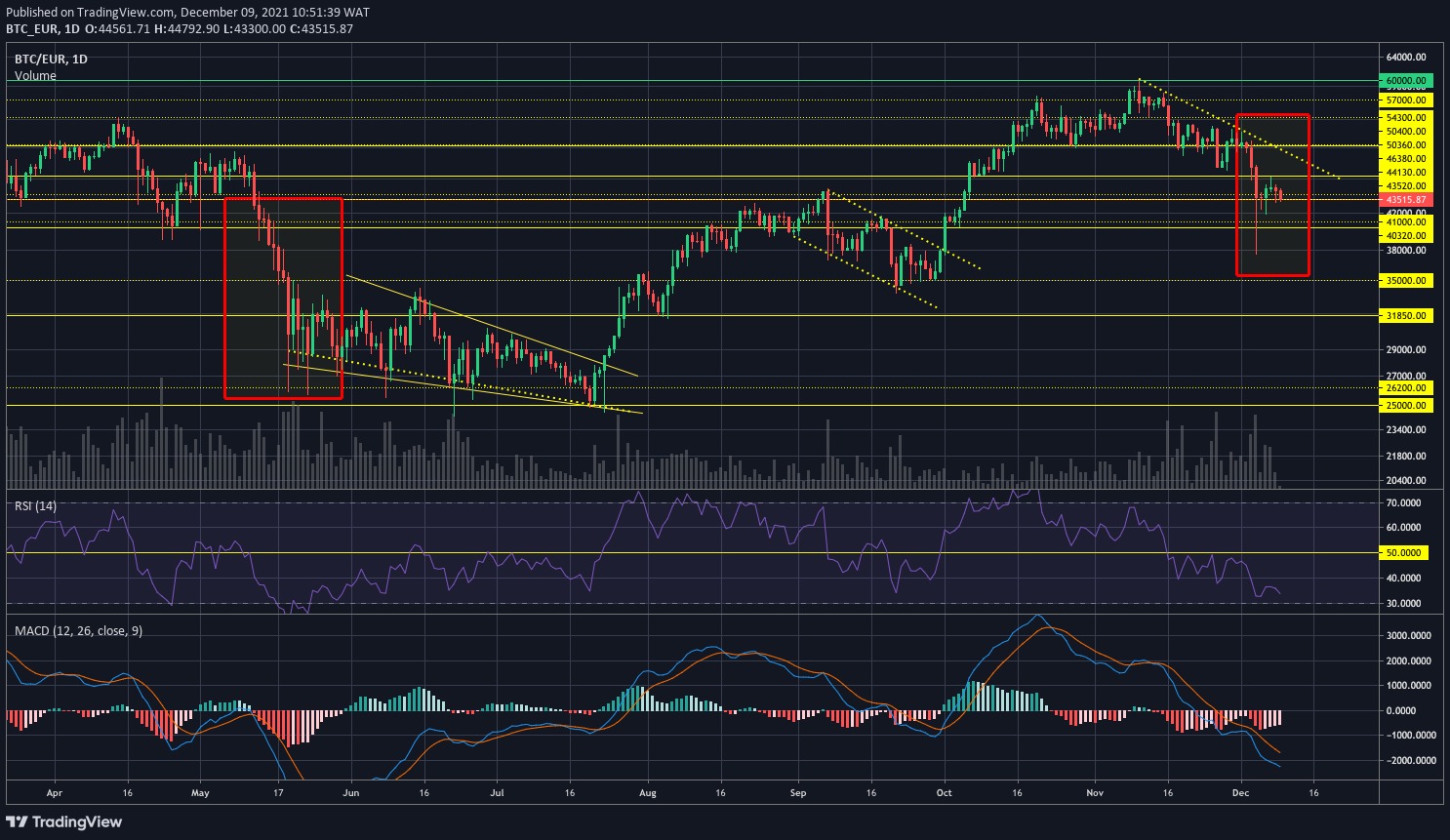 Most other major cryptocurrencies have also fallen sharply, losing around €250B worth of value in a week.

Cardano (ADA) traded at around €1.2 and lost some 20% in the past week. However, the network's fundamentals continue to strengthen as it has recently deployed its first DEX - SundaeSwap on its testnet. Daily candle wicks suggest that buyers have the upper hand, and with the Relative Strength Index (RSI) momentum indicator on bottom, ADA seems to be ready to switch from bearish to bullish in the near future. 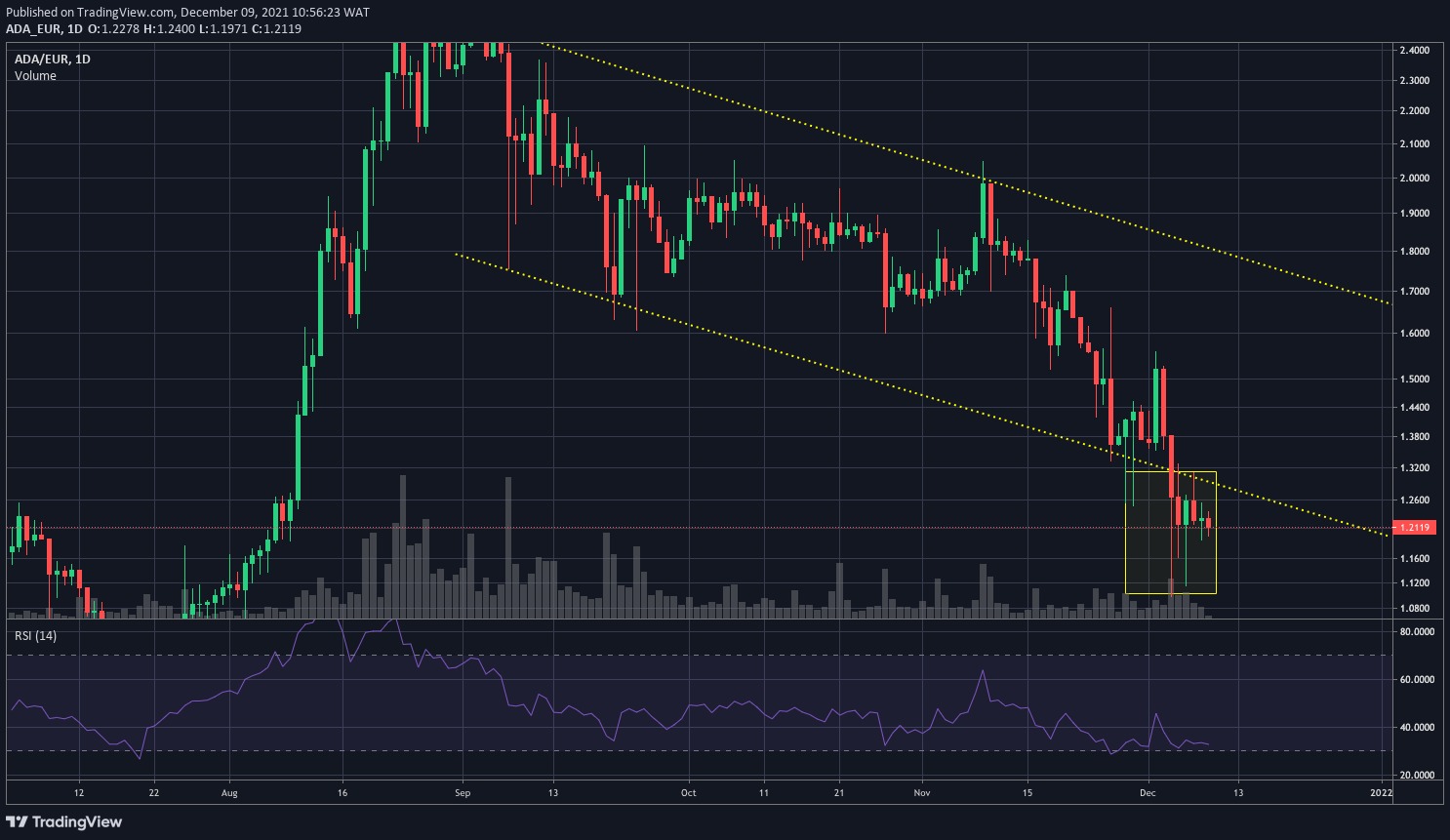 Cardano has crossed the 1M staking wallets milestone across 3,108 staking pools. A total of 33,085,775,493 ADA are staked on the network, representing 72% of the total circulating supply, keeping Cardano one of the largest Proof of Stake blockchains.

On another note, LINK dropped almost 60% from its November high of €33. The price found support at the €16.6 level and quickly rebounded by 20%. Chainlink (LINK) is currently the 21st largest crypto, with a €9B market cap. 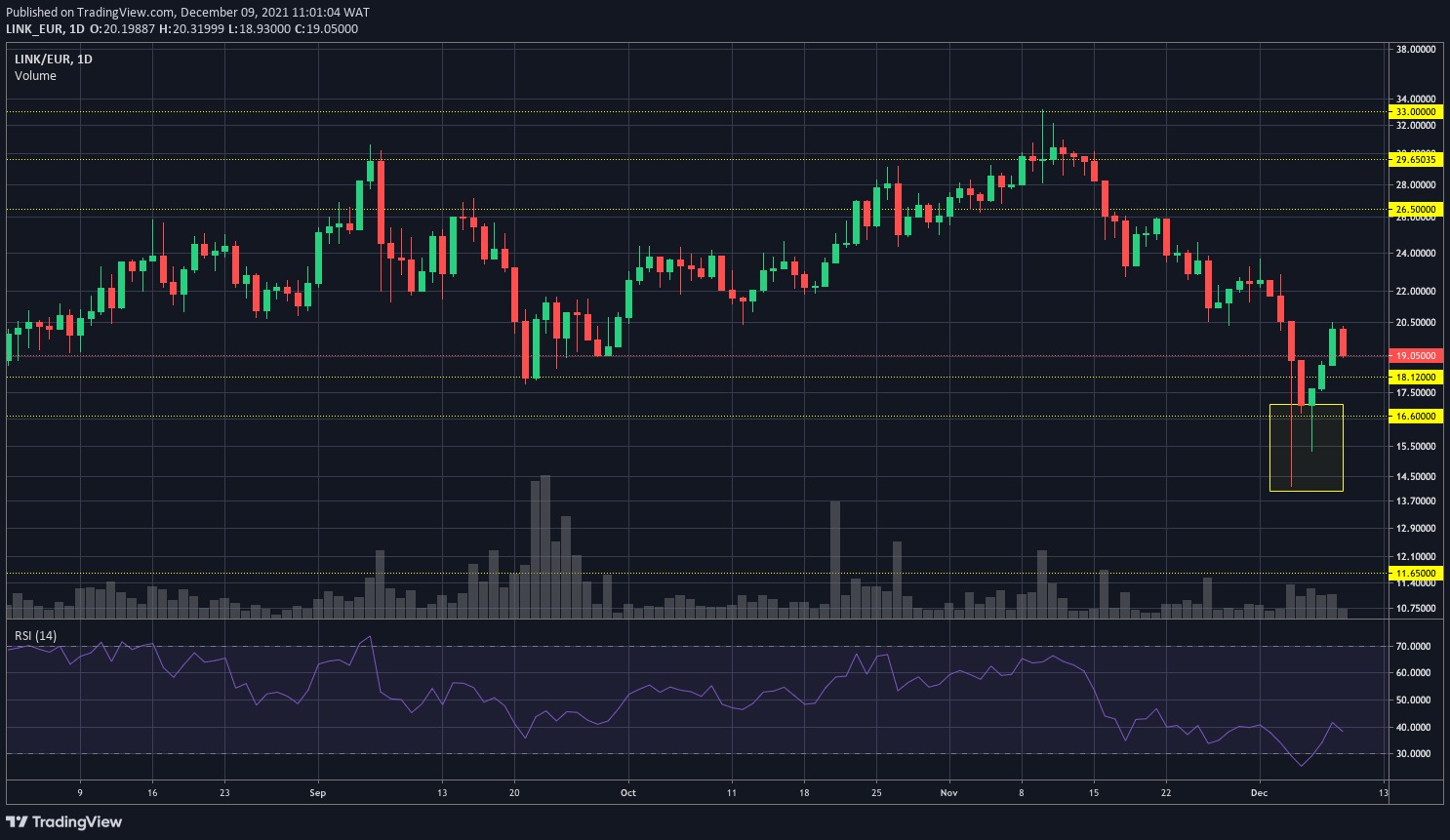 Chainlink Labs announced that former Google CEO, Eric Schmidt, has joined the organisation as a strategic advisor. Schmidt served as Google's CEO and chairman from 2001 to 2011 and as a technical advisor to the search engine's parent company, Alphabet, from 2018 to 2020.

DOT bounced from its strong support at €22. This level was already defended by the bulls three times back in September. Polkadot’s price quickly regained some of the losses, now trading around €26. 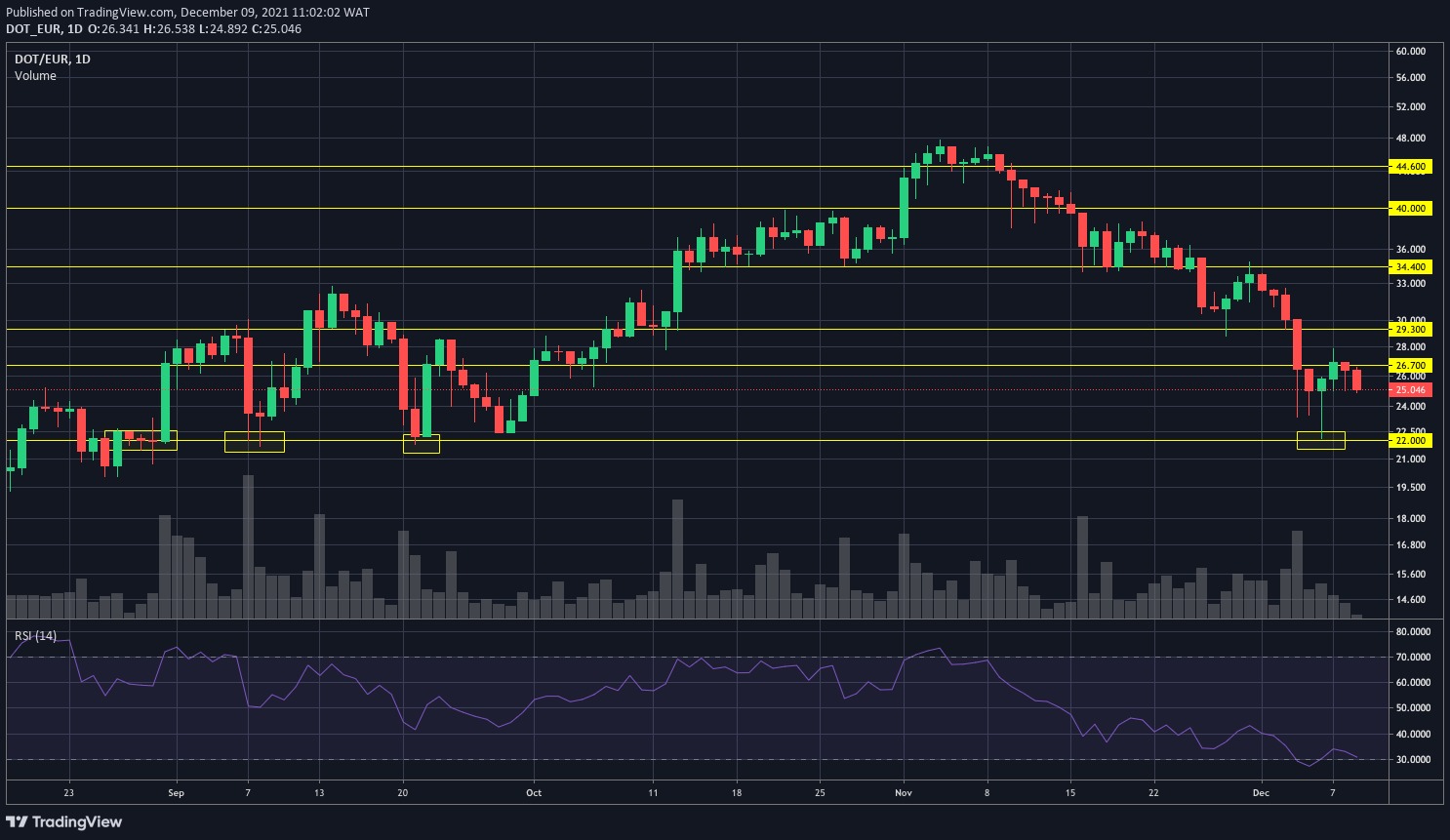 Ethereum reached its highest value against Bitcoin since February 2018.

Ethereum dipped along with the overall market but quickly recovered some of the losses. The price dropped €3,000 but recovered back above the support line of €3,520, printing a large daily candle wick. ETH is down some 15% from its December high of €4,200. 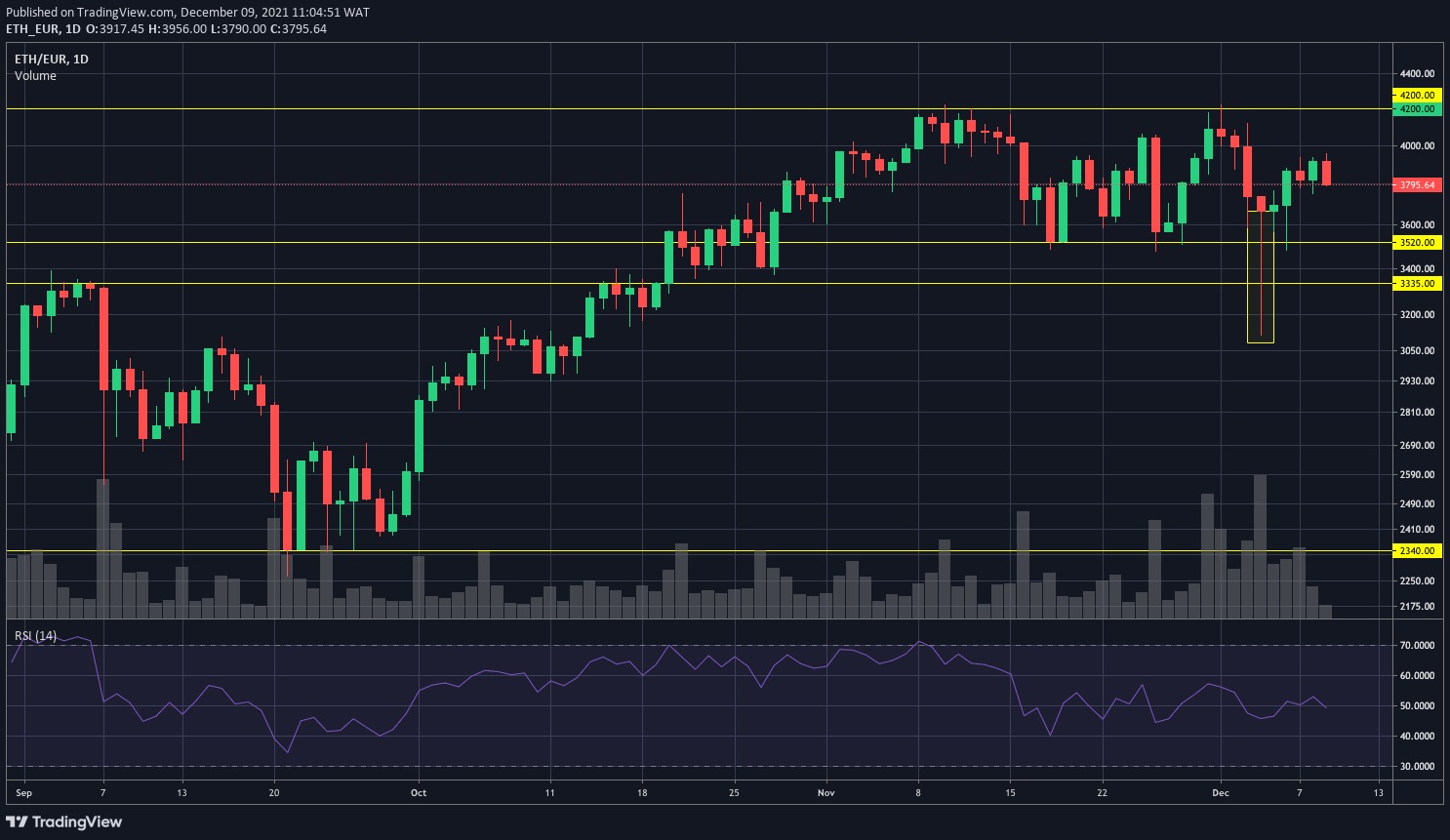 ETH continued to gain value against BTC and reached above 0.080 BTC, reaching the highest value against Bitcoin since February 2018. Data shows that exchanges’ ETH balance are at a 3-year-low which is generally a bullish sign for assets. It is currently trading at 0.087 BTC, however, the pair peaked in June 2017, when ETH was trading at 0.155 BTC.