The crypto market had a ranging path last week, as markets faced the uncertainties around global fiscal policies, as well as the ongoing effects of the Omicron Covid-19 variant. All major altcoins are following Bitcoin as it is trying to make a comeback after the short crash at the beginning of December. The crypto total market cap is hovering around €2T, with Bitcoin dominance at 41%, almost at its lowest this year.

On December 15, the Federal Reserve System (FED) - U.S. central monetary and banking authority - stated that it will change its policy on interest rates and bond purchases, since inflation rates exceeded their threshold. U.S. inflation rates are currently at  6.8%, the highest in the last four decades, while the FED’s target is set at 2%. In order to fight inflation, the central authority has stated that it plans to scale back its bond-buying program faster than it initially anticipated, and it also plans a minimum of three interest rate hikes in 2022. Overall, markets have reacted positively to the news.

Bitcoin printed a few daily bullish candles, but its overall price structure didn’t change significantly: the falling wedge pattern is still in place, with resistance at €43,500 and support at €40,000. Any breakout from this pattern could pave the way for a new trend in near future. 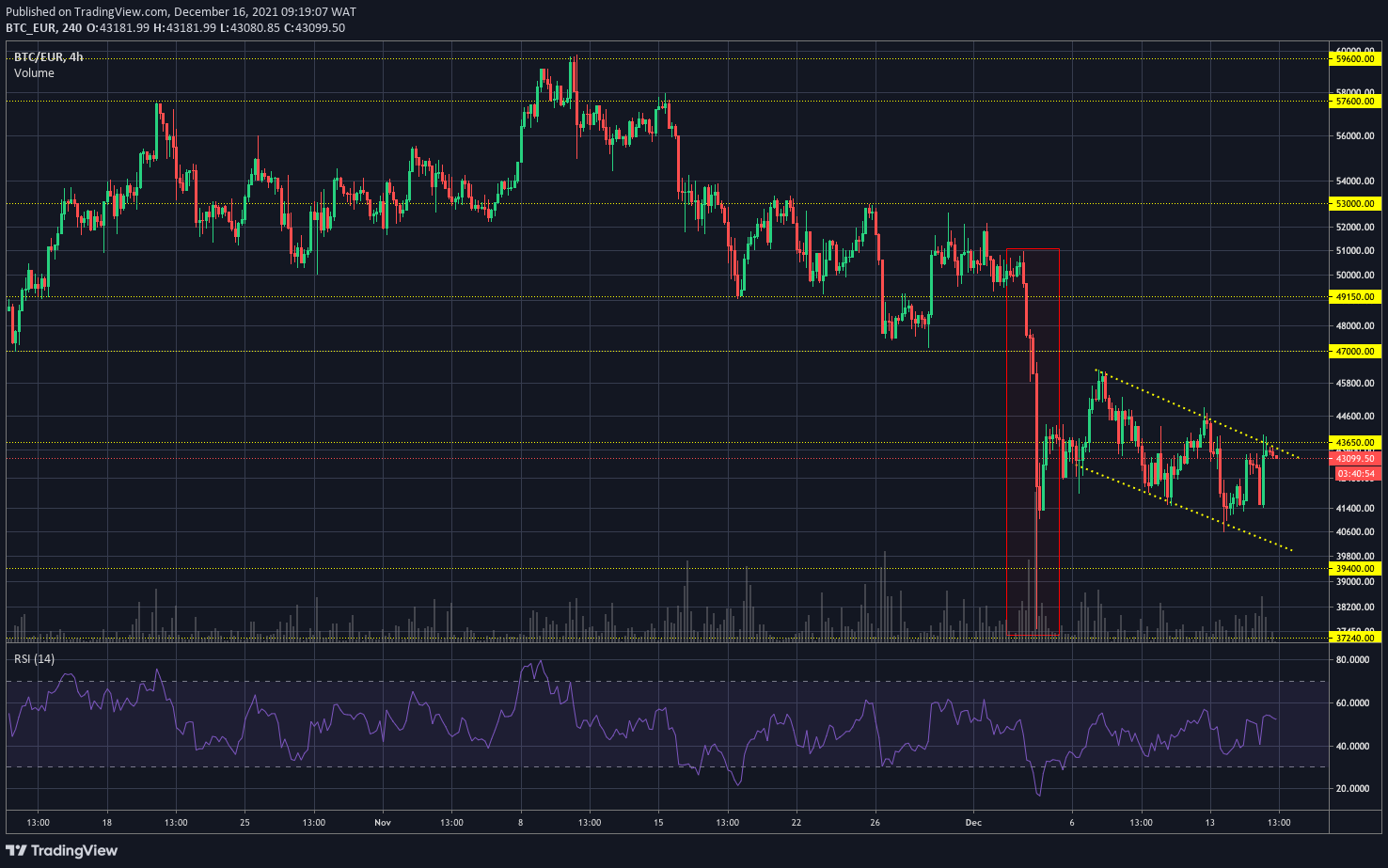 Ethereum trades on May levels

After its all-time-high in November, the price of Ethereum has been faltering.

The second-largest crypto is trading within a range and creating a falling wedge pattern. This pattern has also occurred between May and July, then again between September and October. Both these instances had positive outcomes, with ETH eventually breaking the upper resistance and reaching higher levels. Even though it has shown an upward trend in the past few days, ETH is still trading at €3,500 level, nearly the same value it had in May. 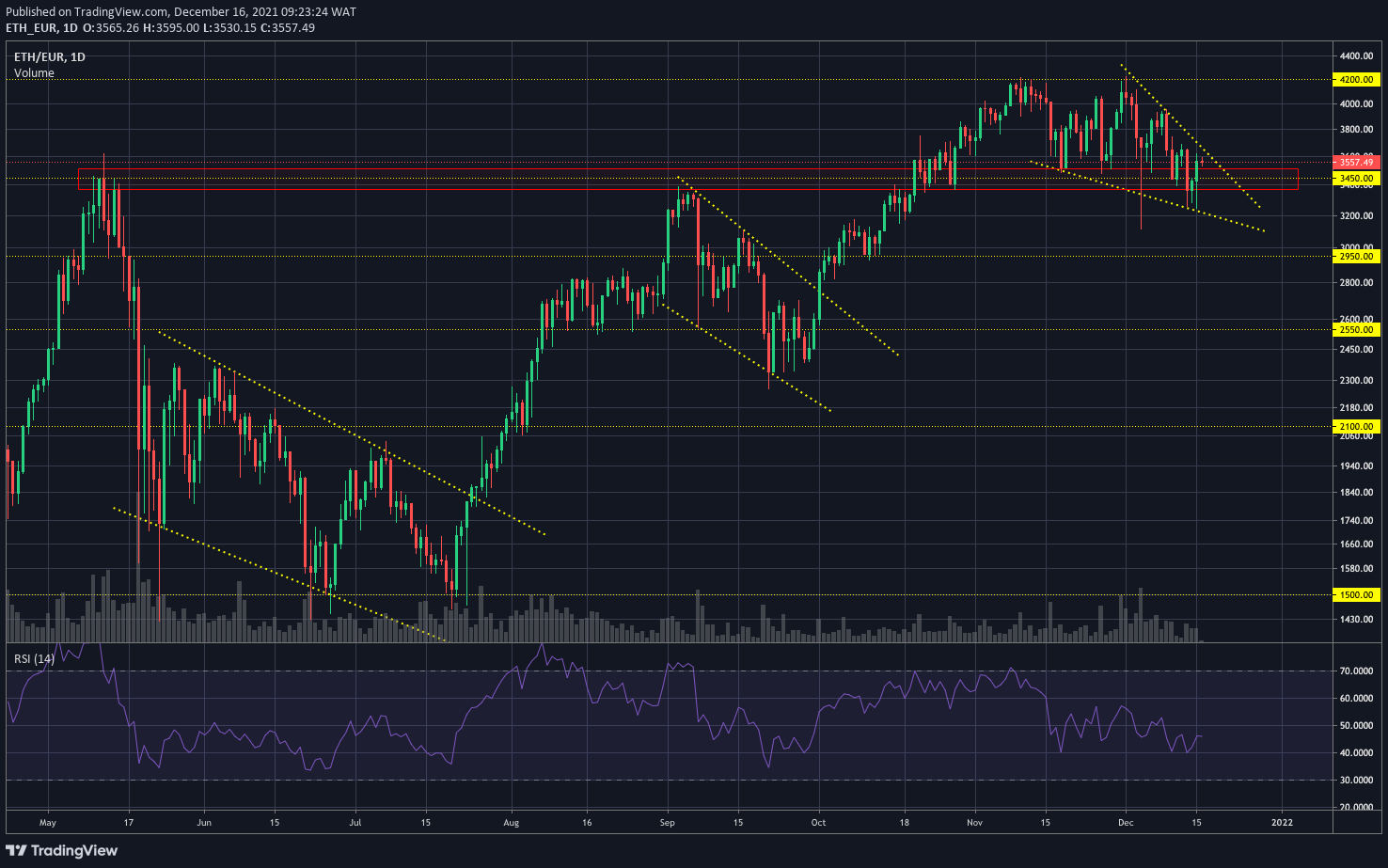 The price of ETH is up by 440% for the year to date (YTD). It has grown by 150% from its July’s low, and it surged significantly due to the London Hardfork upgrade, which introduced coin burns. The smart contracts ecosystem has also been expanding, as it keeps being the top network for both the DeFi and NFT sectors of the blockchain industry.

BEST made a breakout from its triangle pattern in a very bullish move after the announcement of BEST 2.0, the Bitpanda Loyalty Programme upgrade. New benefits, stimulus programmes, burn features and even higher BEST rewards are just a few of the new updates. 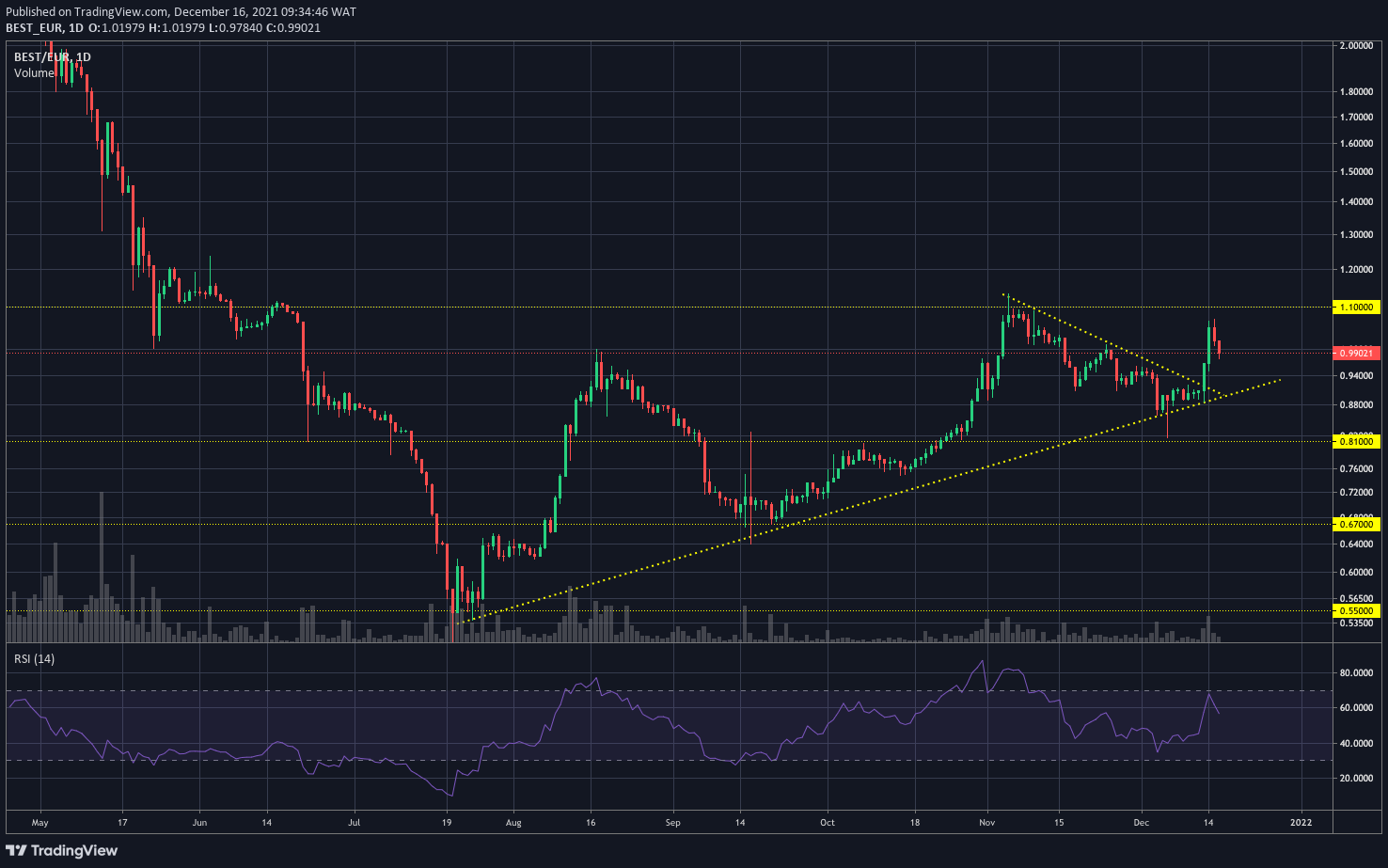 The token is trading at around the €1 level, 80% higher than its July low, but which is still around 60% lower than its all-time-high. The Loyalty Programme will be upgraded with new VIP levels, expanded from three to five, BEST rewards will go from monthly to weekly and it introduced the new BEST Stimulus Programme. With the new BEST Stimulus Programme, BEST will be burnt in the amount of up to 25% of collected trading premiums by BEST holders with VIP level. These burns will be repeated monthly until up to 75% of the total BEST supply - out of the 1 billion BEST originally issued - has been burned.

Tesla CEO, Elon Musk, is again being considered responsible for the rapid rise of DOGE, since he announced that Tesla will accept payments in DOGE for its merch, causing the cryptocurrency to soar by almost 40% intraday. The memecoin traded at around €0.2. 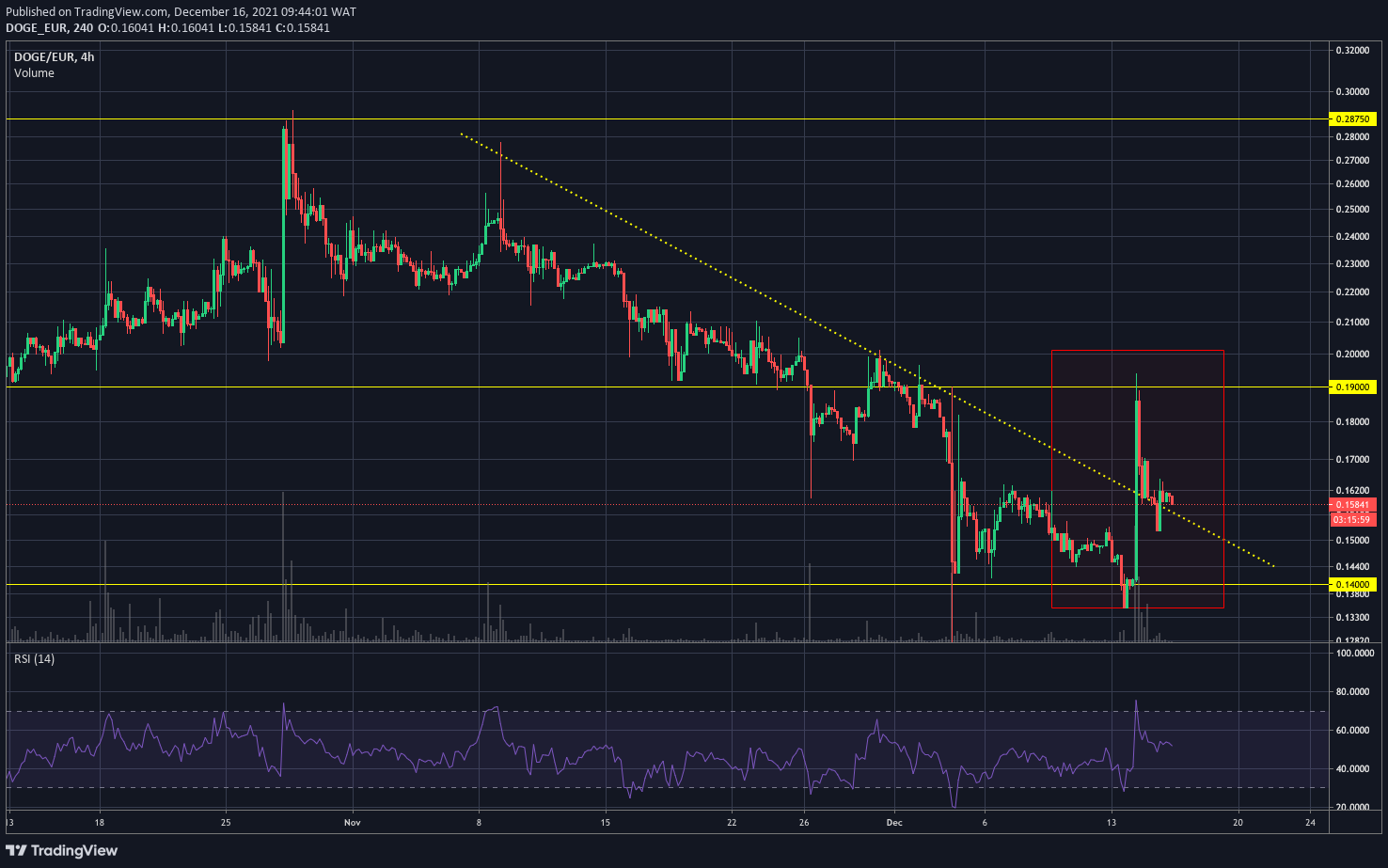 However, DOGE tested the support at €0.15, but on a positive note, it is currently still trading above the trendline.

Amid the parachain auctions hype, Polkadot saw a growth of 400% between July and November, reaching its all-time-high at €47. Similarly to the overall crypto market, DOT has been in a downtrend lately, and it’s now testing the lower support at €22. 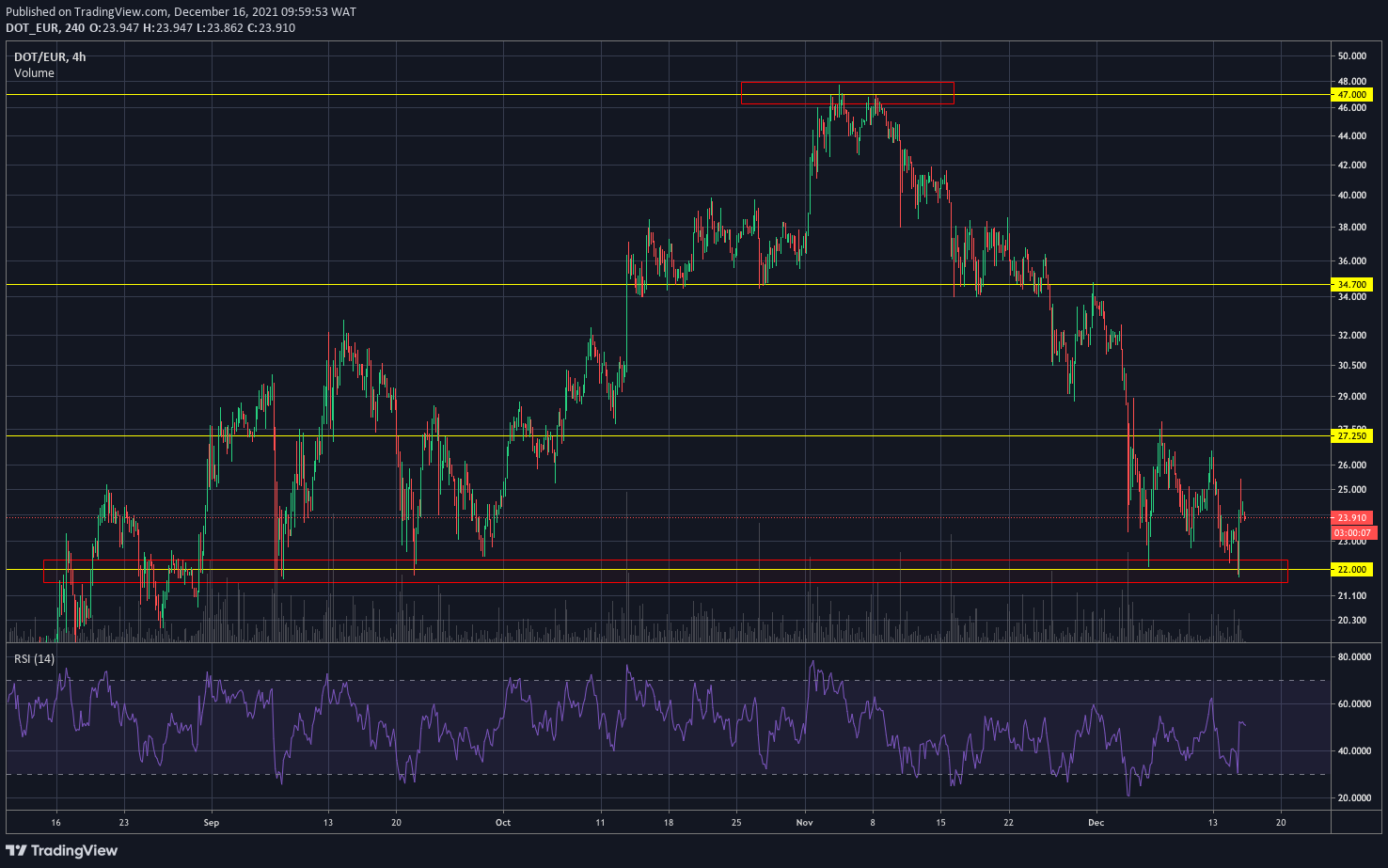 DOT has already tested this level in September and has rebounded a couple of times. The RSI indicator is slowly picking up, suggesting this support could hold.