Hopes are still high for a crypto Santa Claus rally

The crypto market had a fluctuating path in the last week and even though it encountered some difficulties, most cryptocurrencies managed to overstep their crucial support zones. Market sentiment is still fearful, with the Crypto Fear and Greed Index pointing at a fear level around 40, around 25 points higher than last week. The macro markets look set to decline with the end of the year approaching, but hopes for a Santa Claus rally are still high. The expression “Santa Claus” dates back to 1972, when it was first mentioned by Yale Hirsch in his Stock Trader's Almanac and it indicates the rise in the financial market taking place in the last 5 trading days in December and the first 2 in January. Investors are still optimistic about a crypto Santa Claus rally.

The market is moving slowly as usual in the times preceding the holidays. Overall, it still shows a downtrend, after weeks of consolidation and negative movement. Bitcoin has been correcting its price over the last four weeks and could possibly close the ongoing week with losses. However, BTC managed to surge above the falling wedge pattern on the daily chart and is now moving up towards the €47,000 level, which is the first resistance level at the moment. 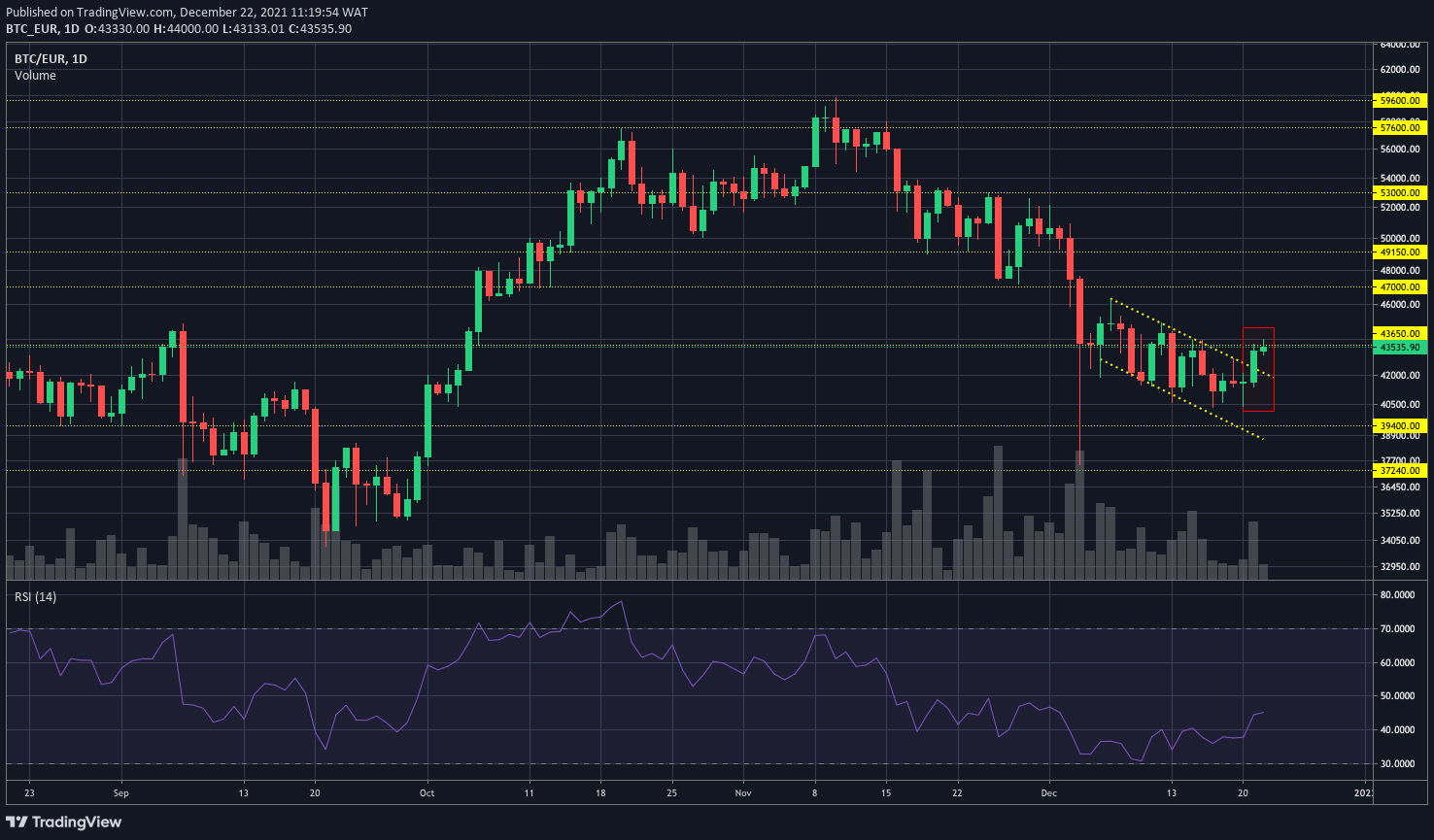 Since the beginning of December, BTC’s price has fallen by -17% and is now trading at around €43k. The price touched an intraday low of €37,400 on December 4.

Ethereum’s price broke the upper resistance of €3,500 and is showing positive momentum. The price is down -16% from its peak at €4,200 but it is holding stronger than other altcoins, mostly due to the implementation of the EIP-1559 update and its fee-burning mechanism. 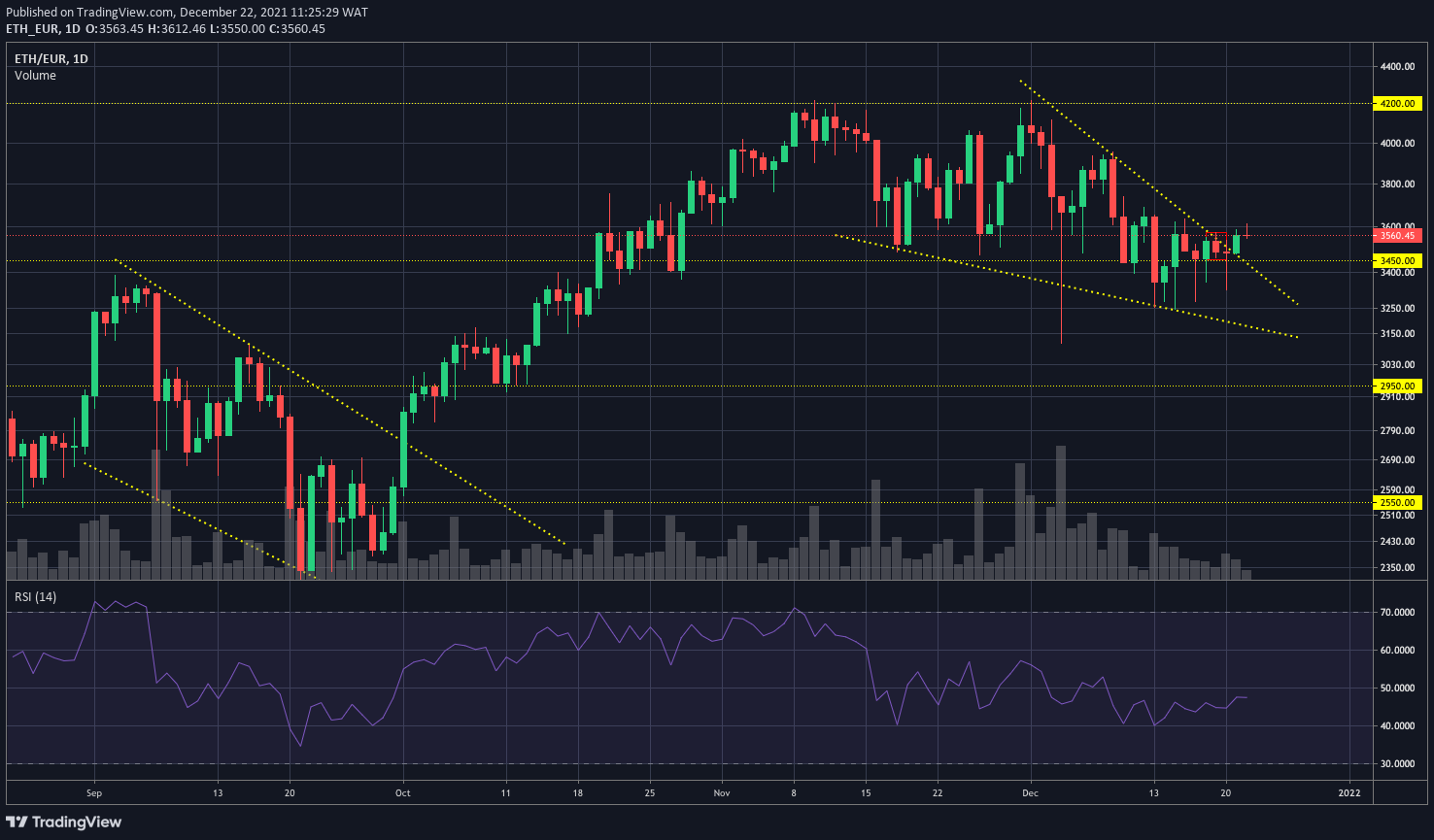 The network is now able to burn more than €22m worth of ETH in just a day, and its daily net issuance currently stands at €25 million. In the burning process, a large portion of ETH is removed from the market, likely decreasing selling pressure. Since the upgrade went live last August, around €4.4B worth of ETH have been burned.

XRP surging due to SOLO airdrop

XRP broke the descending triangle and is heading towards the $1 level. The bullish move could be connected to the upcoming Sologenic airdrop scheduled for December 24. This airdrop is one of the largest ever distributed in the crypto space, with XRP holders receiving a total of $100M worth of $SOLO tokens. 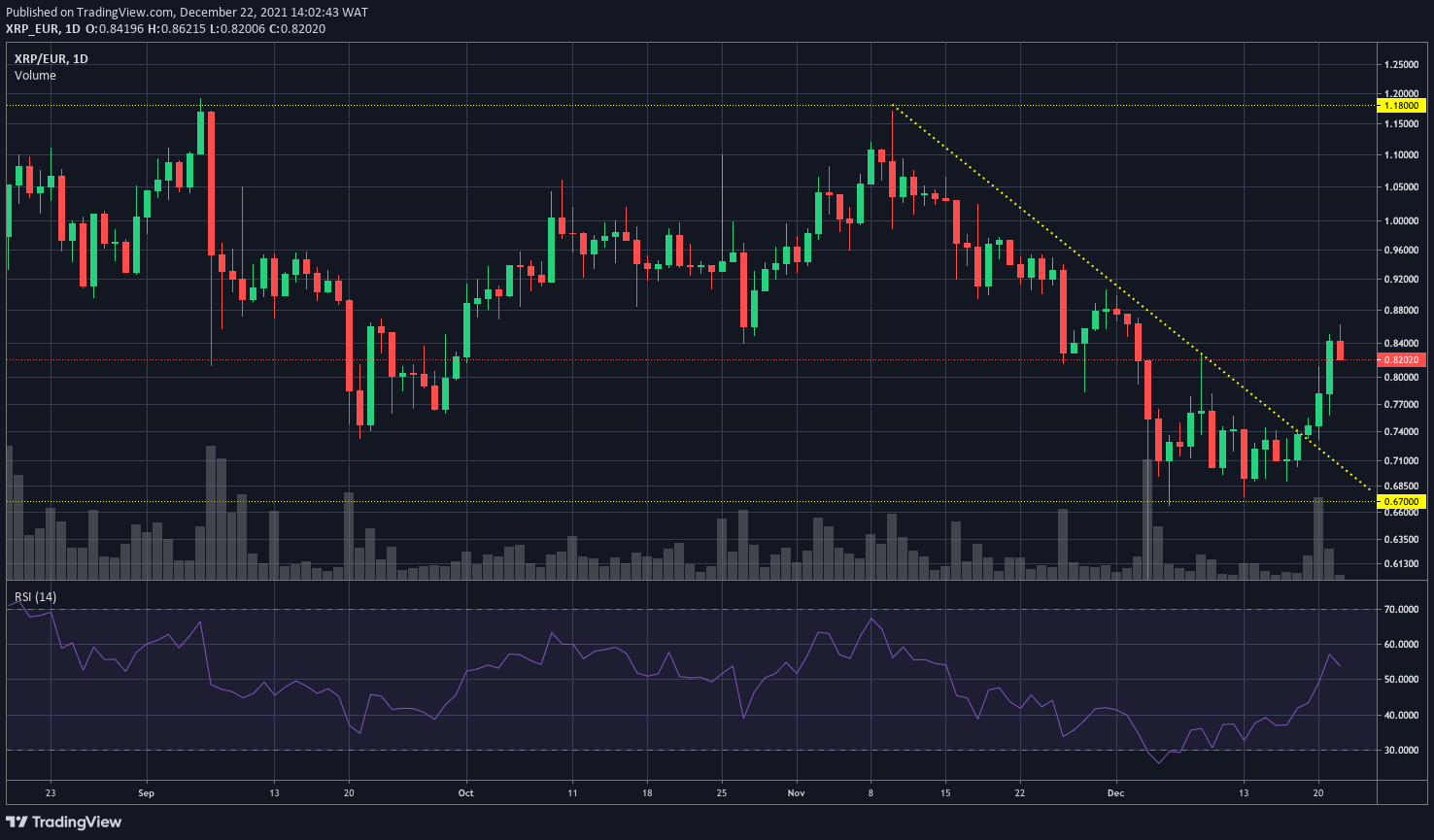 Sologenic is building on the XRP Ledger and is now working on a tokenised securities ecosystem. The snapshot is scheduled to be taken on December 24 at 20:00 UTC.

IOTA’s price surged over the €1 level and above the falling wedge pattern. The bullish move is connected to the IOTA staking mechanism going live and the release of Firefly 1.3.0. wallet. 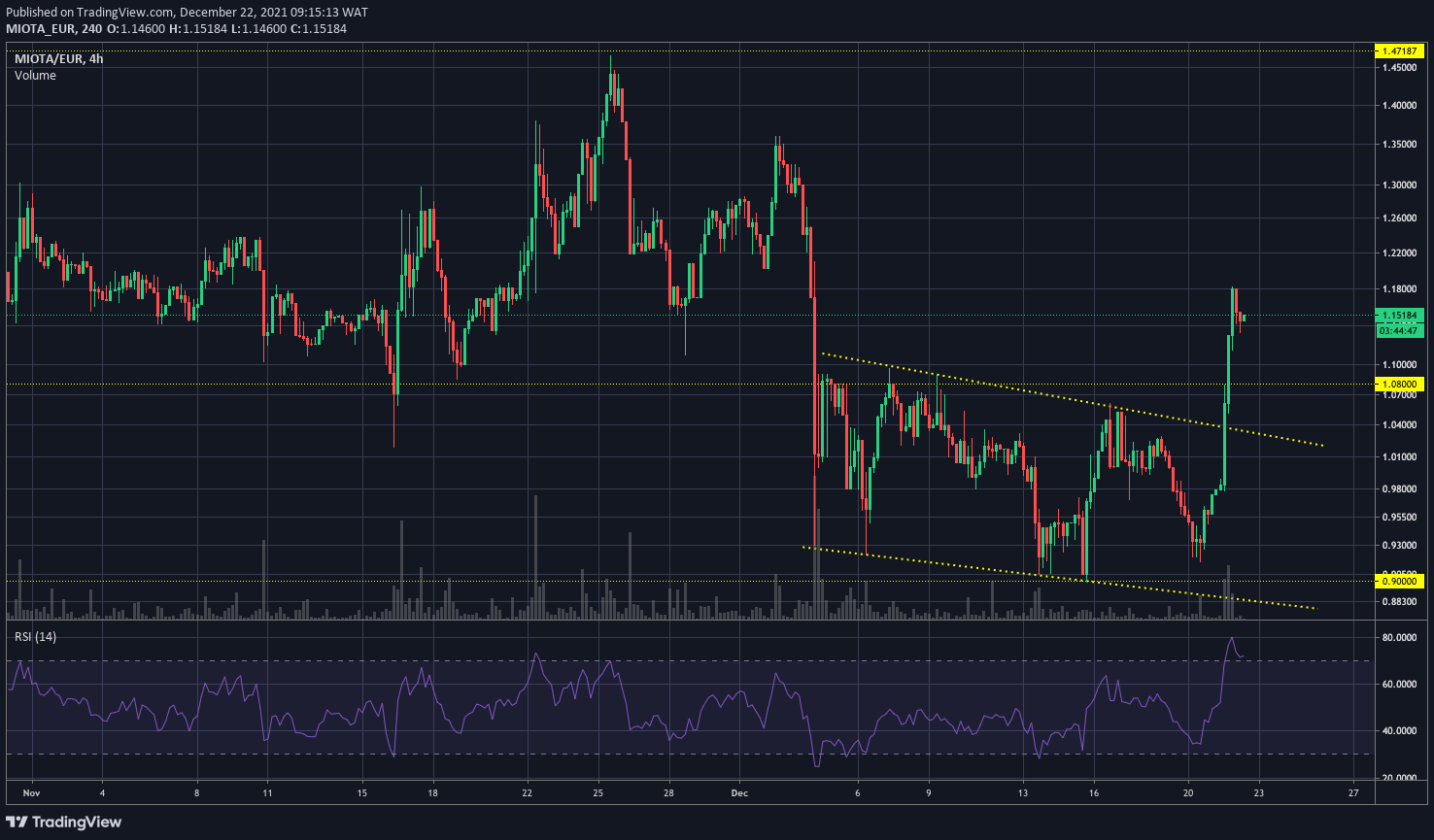 IOTA holders can stake their IOTA and obtain SMR, the native token of the Shimmer network, and ASMB, the native token of the Assembly network. IOTA staking adds another layer of utility to the IOTA token and it marks a significant milestone for both the Shimmer and Assembly networks. Both tokens constitute the foundation of their networks and are built to reward the community and empower fully self-governed ecosystems.

Deutsche Telekom AG subsidiary – T-Systems Multimedia Solutions (MMS) has bought an undisclosed amount of DOT in the latest blockchain push. MMS isn’t a new joiner of the crypto sphere: in fact, DOT is the fourth crypto added to the German telecommunications giant’s platform. 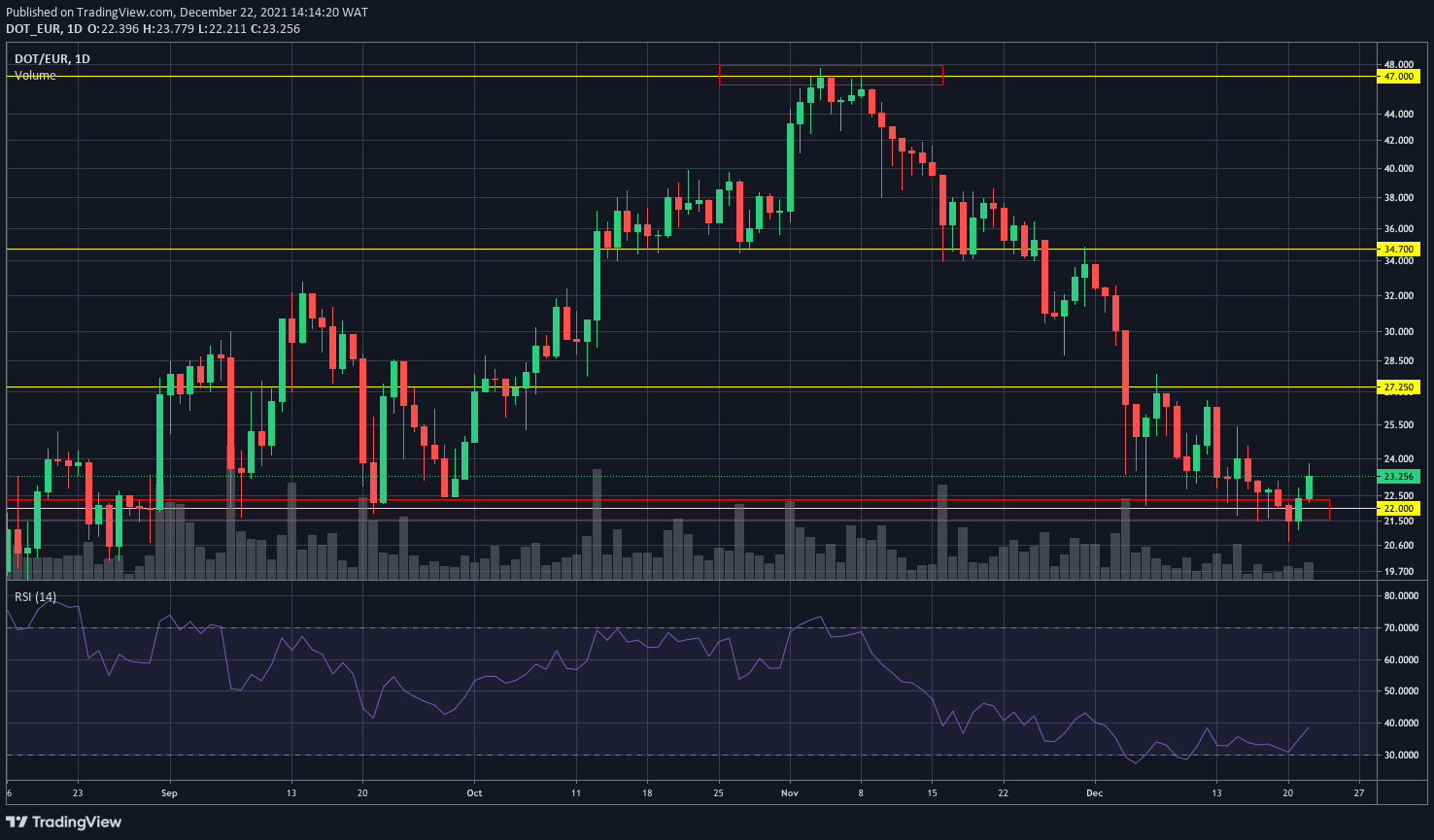 Polkadot’s price is bottoming out around €22 and is showing signs pointing towards a possible bullish turn. The price is down -50% from the all-time-high reached in November. However, the RSI indicator is starting to rise from the oversold levels with bulls strongly defending the support zone.

Ready to trade XDB? Bitpanda is offering a raffle with prizes of €50,000 in XDB!