Countdown to the last candle close

Despite regular dips, the cryptocurrency market recorded significant growth in 2021, attracting billions in capital and seeing a high increase in popularity among investors. On a year-to-date basis, cumulative crypto market capitalisation surged three-fold, from €685B as of January 1st to €2.05 trillion as of December 27, 2021.

The crypto market cap reached an all-time-high on November 10 at €2.6T, the same day that Bitcoin hit a record price of €60,000. Altcoins recorded a massive inflow of capital, which decreased Bitcoin’s dominance by almost half. At the beginning of the year the biggest cryptocurrency by market cap stood at 72% dominance, while it ended the year at some 40%.

Bitcoin remains the top coin with €824B in value, but Ethereum is not trailing far behind and closing the gap with €410B in value. Ethereum rose some 440% during this year and traded at 0.088 against the BTC pair on December 9. This is the highest since May 2018. Bitcoin rose around 80% or some €20,000 higher than the start of the year. 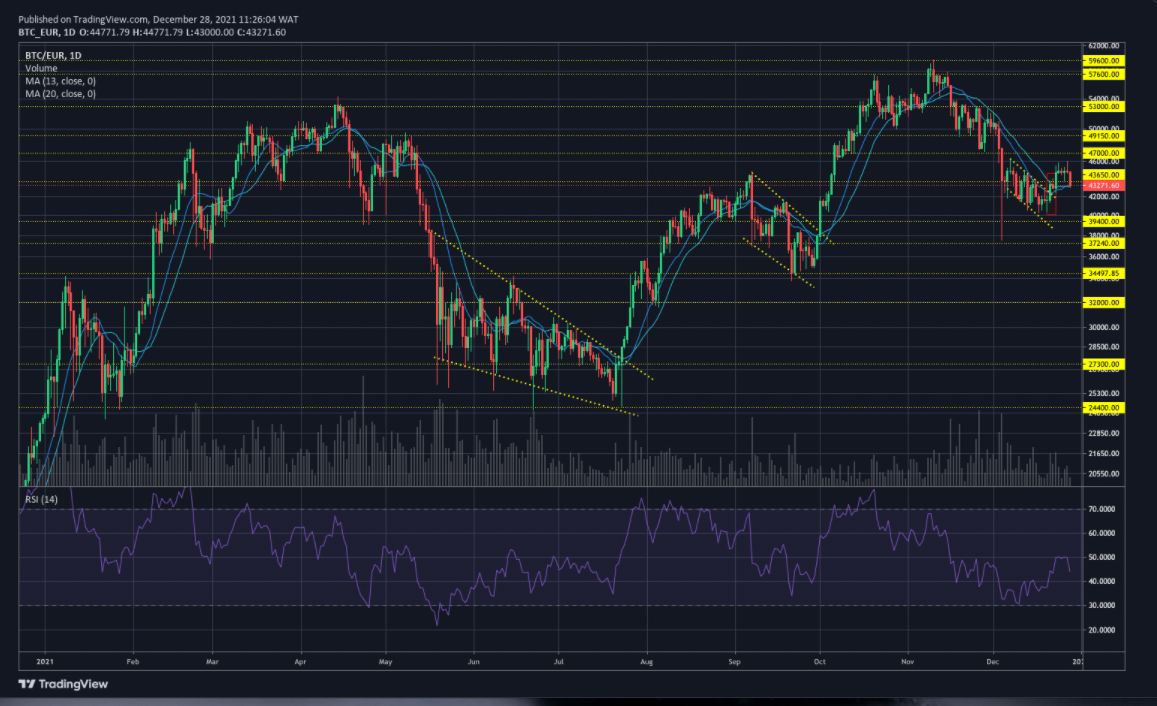 Thin liquidity during the holiday season

The last two weeks of the year are easily described as the holiday season when most of the traders are already winding down and the crypto markets see their lowest liquidity of the year. It is a time when chart pattern breakouts should be viewed with great suspicion as many false breakouts occur during thinly-traded holiday periods.

The implication is that even a small change in price could spark more emotional trading reactions and a price event could result in a snowball effect up or down. Trading remained mostly in range this year, implying no bias towards an upside or downside. Ethereum was following the Bitcoin movement after the successful breakout of the falling wedge formation and is moving above the support level of €3.450 on daily chart. 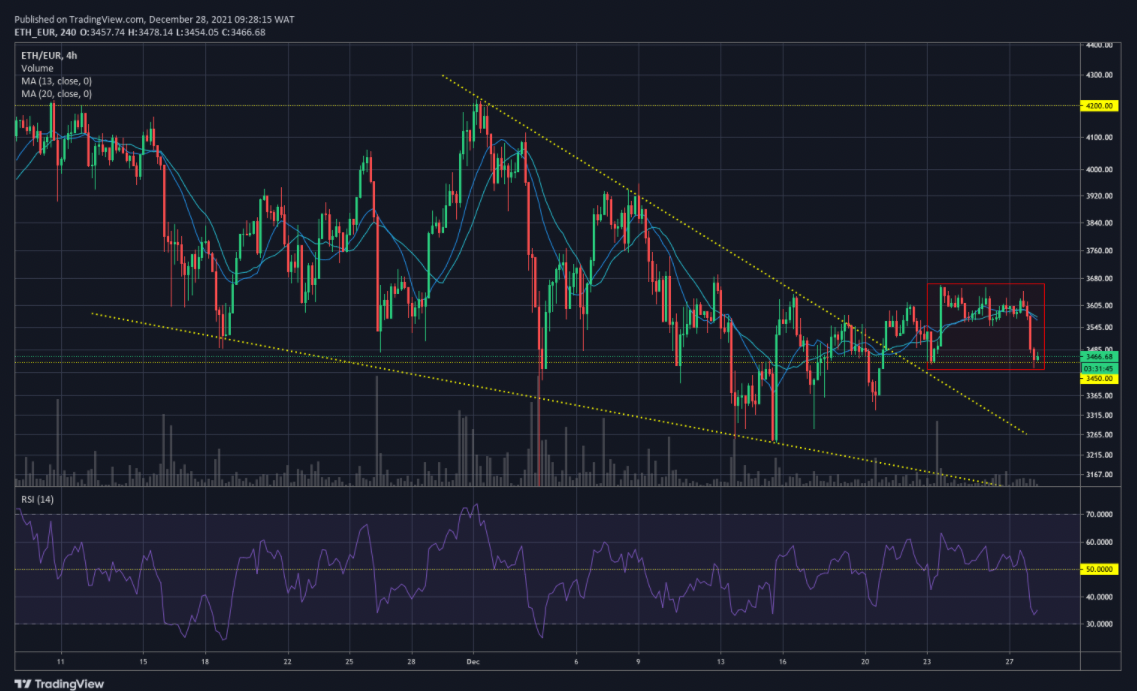 The past year will go down in history as the year of adoption in the cryptocurrency market in almost all areas. Merchants from different sectors increasingly deployed various digital assets as a payment medium, Bitcoin was declared legal tender by El Salvador and new derivatives and related investment products were launched. Traditional market products made it easier for investors to get involved in the crypto space, especially for large institutional companies.

On the other hand, correlation increased between traditional financial markets and digital asset markets, which is evident in price movements and major sell-offs particularly resulting from recent fears over the spreading Omicron variant of Covid-19, the potential of global markets tightening and changes in monetary policies of central banks.

Major world stock indexes are trading near all-time-high with rising risk of slowdown and potential sell off, also putting the crypto market in a vulnerable position. Omicron could pose a threat that the markets can’t ignore, with some countries reintroducing lockdown restrictions to stop the spread.

Meanwhile, Evergrande fell into “default” and the US Central bank (Fed) confirmed plans to decrease money tapering from March and set the stage for three interest rate hikes in 2022. Additionally, many countries are introducing new crypto regulations which could tighten money flows. These are the main challenges for generating returns on crypto in the coming year which should be taken into consideration.

Christmas Eve is behind us, and it was a green one. The majority of cryptocurrencies are trading flat or slightly negatively in December. As per the Crypto Fear & Greed Index, the market is currently at 27, characterising “fear,” down from the “neutral” score of 45 last week. Although sentiment is low during holidays, low numbers could indicate buying opportunities. January doesn’t typically tend to be bullish. But the world’s biggest cryptocurrency bucked the trend this year, gaining 14.5% over the course of the month. Maybe this will be similar in 2022.
Most major altcoins are following Bitcoin and are trading near their respective support levels, indicating that sentiment is improving and traders are buying minor dips. December was really not as profitable as many desired, but overall, 2021 was a very positive year with most altcoins posting triple digit returns.
The market is well positioned for an even greater upcoming year, stay tuned - we will cover the top stories and market research, and keep you posted and prepared for the best trading year.

We wish you a happy and profitable New Year,