A troubled start to the year for crypto

Bitcoin and most major altcoins in the top 10 started the year 2022 in the red, with dominant bearish pressure and with the Crypto Fear & Greed index pointing at 15, marking “extreme fear”. The largest cryptocurrency by market cap was hovering above its support level of €41,000 in the first five days of the year, before dropping some €4,000 on Wednesday. A closer look at the price movement on the daily charts shows that BTC has been trading inside a descending wedge since December 21. The wedge is normally considered a sign of bullish movement: a breakout from here is the most likely scenario, but the market has to find a floor first.

The lower trendline was tested multiple times up until this moment but BTC didn’t manage to break it - neither above nor below. Macro factors are indeed bearish, with the FED tapering and fighting inflation, which is higher than expected.

Additionally, authorities in Kazakhstan declared a nationwide state of emergency and shut down access to the internet, which led to many Bitcoin miners going offline. Altcoins dipped as well, following Bitcoin’s trend. Kazakhstan is the second-largest country in the world for the Bitcoin mining hash rate, making it an important player. During the internet outage, the hash rate dropped from a high of 194 EH/s - reached on January 4 - to a low of 168 EH/s.

Bitcoin’s total market cap stands at €774B, with a total market dominance of 39.3%. BTC’s market dominance has continued to drop and is currently at its lowest since May of 2018. Back in 2018, an all-time-low was recorded during the great collapse of the crypto market in January of that year. At the time, BTC’s dominance was only at 33%.

With the crypto market facing volatility after the New Year’s celebrations, some players, such as Chainlink, are showing strength. LINK is one of the best performing tokens so far in 2022, surging some 30%. It is currently trading at around €21. At the beginning of the year, the price was set to €16. The Relative Strength Index (RSI) is in a clear uptrend and above 50 on the daily chart, indicating that a bullish trend could be prolonged.

Cardano among the most developed projects on GitHub in 2021

The price of ADA has seen a pullback recently. Even though the price was underperforming, Cardano’s project development didn’t stop. In fact, Cardano was one of the most developed projects on GitHub in 2021, with over 140,000 events. Cardano’s founder Charles Hoskinson has revealed that 127 projects are being developed on the Cardano blockchain, and he foresees the number of ADA users increasing 10 times due to the planned NFT projects on the network.

Since the Alonzo hard fork, Cardano has initiated the layer-two Hydra upgrade, which will allow off-chain transactions in staking pools that don’t partition the ledger itself. Another project in Cardano’s pipeline, and a unique feature offered by the network, is the initial stake pool offering (ISPO). ISPO will allow users to participate in funding by delegating their tokens and, as a reward, receiving tokens for the project they fund.

It’s been a slow start of the year for Ethereum. The second-biggest crypto is currently battling with Bitcoin over market dominance. The past year has been very Ethereum-centred, with ETH outperforming BTC by a hefty margin.
However, Ethereum price lost ground in the recent sell-off and broke down from the falling wedge, which it has been trading since mid-November last year. The price fell under €3,000 for the first time in almost 3 months.

Despite having a hard time in these first few days of the year, BTC and ETH are likely to be again decisive players in the crypto market in 2022.

BEST survived the dip better than several other altcoins and even rose in comparison to BTC. The BEST/BTC pair is trading at 0.00002423, its highest in the last three weeks.

Soon BEST 2.0 will be launched and the Loyalty Programme will be upgraded: new VIP levels, new weekly BEST rewards and the new BEST Stimulus Programme. Learn more about BEST 2.0 here. 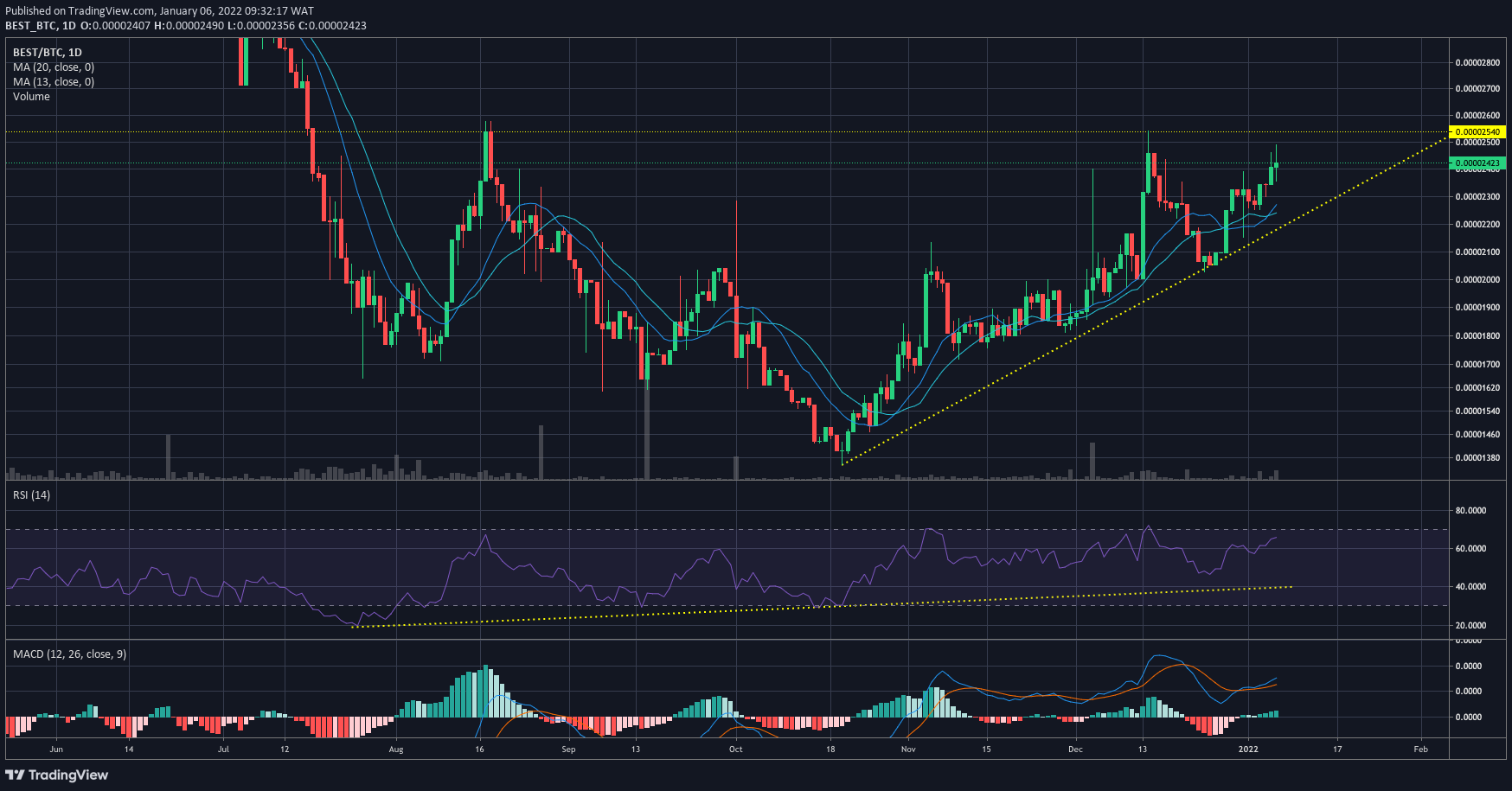 Ready to trade XDB? Bitpanda is offering a raffle with prizes of €50,000 in XDB!