Extreme fear and major losses in the crypto market

The first two weeks of the year haven’t been the greatest for Bitcoin and the whole crypto market. The trend was generally downward, with some deep drops. The total crypto market cap fell to around €1.75T, losing around €200B in the last seven days. During the past week alone, the crypto market has mostly been chopping sideways, but it took a fall on January 6 when Bitcoin price dropped to €35k, with the entire market following suit. According to the Crypto Fear and Greed Index, the market sentiment is in a state of extreme fear and at its lowest point since July 2021. 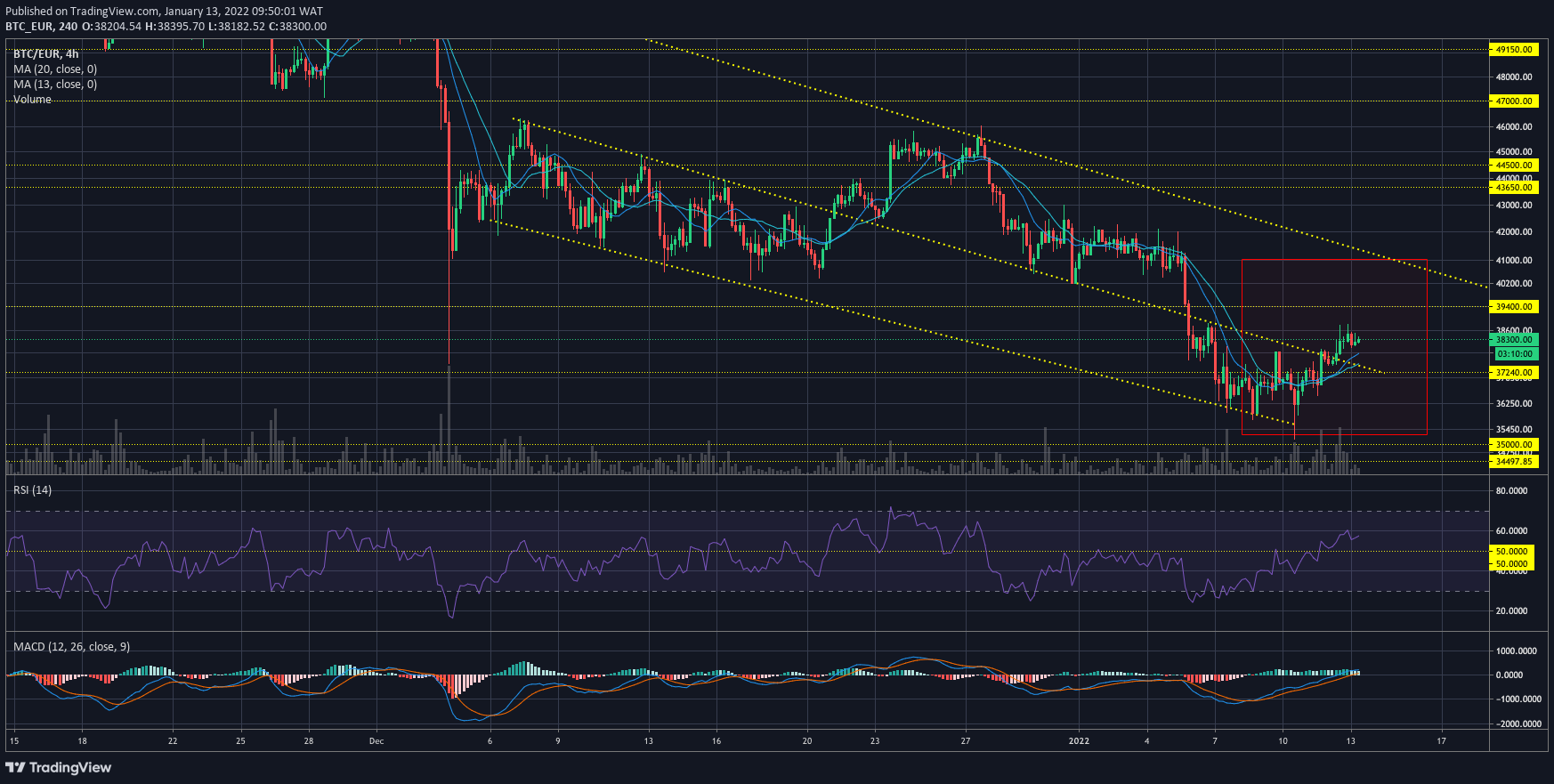 Bitcoin was leading the market but had a difficult week, even testing the low it reached in September on the intraday chart. BTC is still trading in a falling wedge formation, while the RSI (Relative Strength Index) momentum indicator is showing an oversold position. Bitcoin has lost 35% since its all-time-high on November 10, and it’s only up by 15% since this time last year.

A 40% correction is not unusual, and it isn’t the biggest we’ve seen in the past 12 months, so it’s too early to call it a bear market just yet. Keep in mind that BTC fell by more than 50% from April to June last year, and completely recovered its losses by October.

Ethereum started the year deeply in red, down by approximately 10%. ETH fell to the three-month low of €2,600 before bouncing back to €3,000. The price is moving in a falling wedge pattern, a pattern ETH followed twice last year. Both times, Ethereum successfully broke the pattern to the upside. 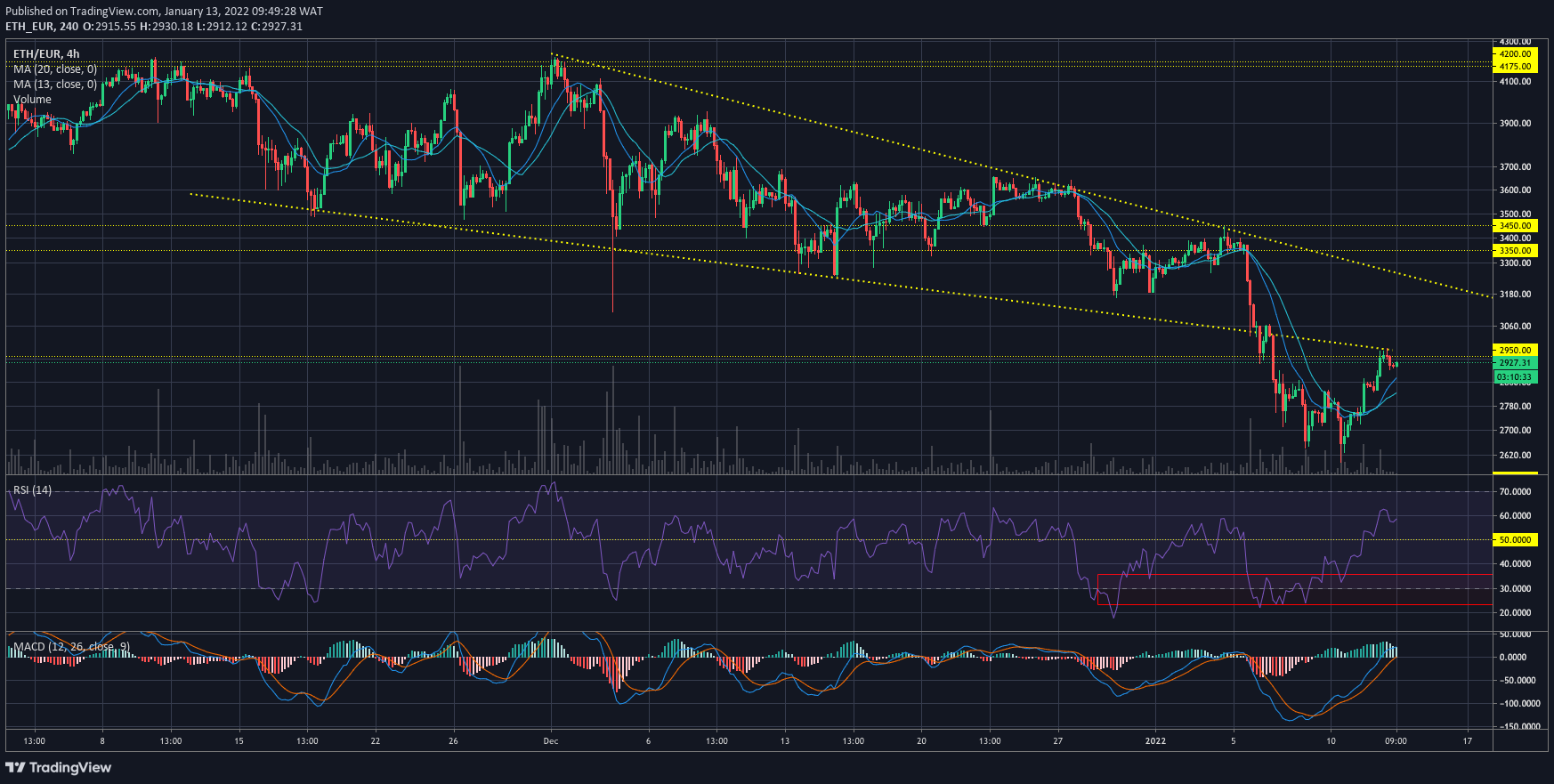 A wedge is a price pattern marked by converging trend lines on a price chart. The two trend lines are drawn to connect the respective highs and lows of a price. These patterns have a very good track record for forecasting price reversals. A falling wedge is a bullish pattern, while on the other hand, a rising wedge is a bearish pattern.

Chainlink price is up to €25, 40% higher since the start of 2022. LINK is moving above the 13 and 20 moving averages, with the RSI rising close to the overbought zone, which indicates that buyers are still in control of the price. The MACD (Moving Average Convergence Divergence) is also running in bullish territory. 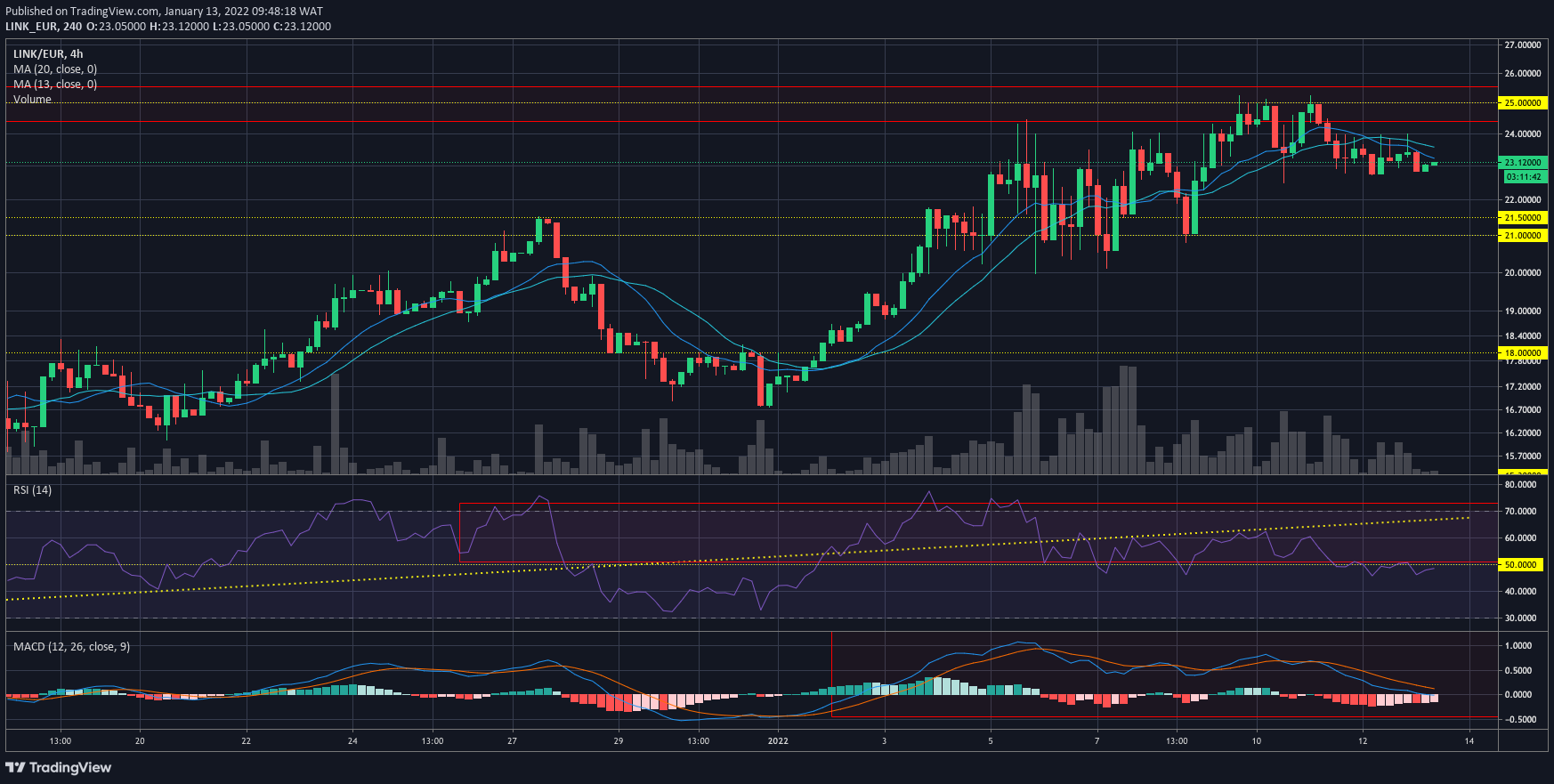 LINK surpassed some major coins and became the twelfth-biggest crypto by market cap, currently valued at around €10B.

ADA has started to move in a bullish direction and has passed the €1.06 level. The price flipped support to resistance in the down-channel on a 4-hour chart. The RSI saw higher troughs while maintaining steady peaks, forming an ascending triangle, which indicates increasing buying power. ADA is trading at around 60% below its all-time-high, even though Cardano has seen significant growth in active users and plenty of development activity in recent months. 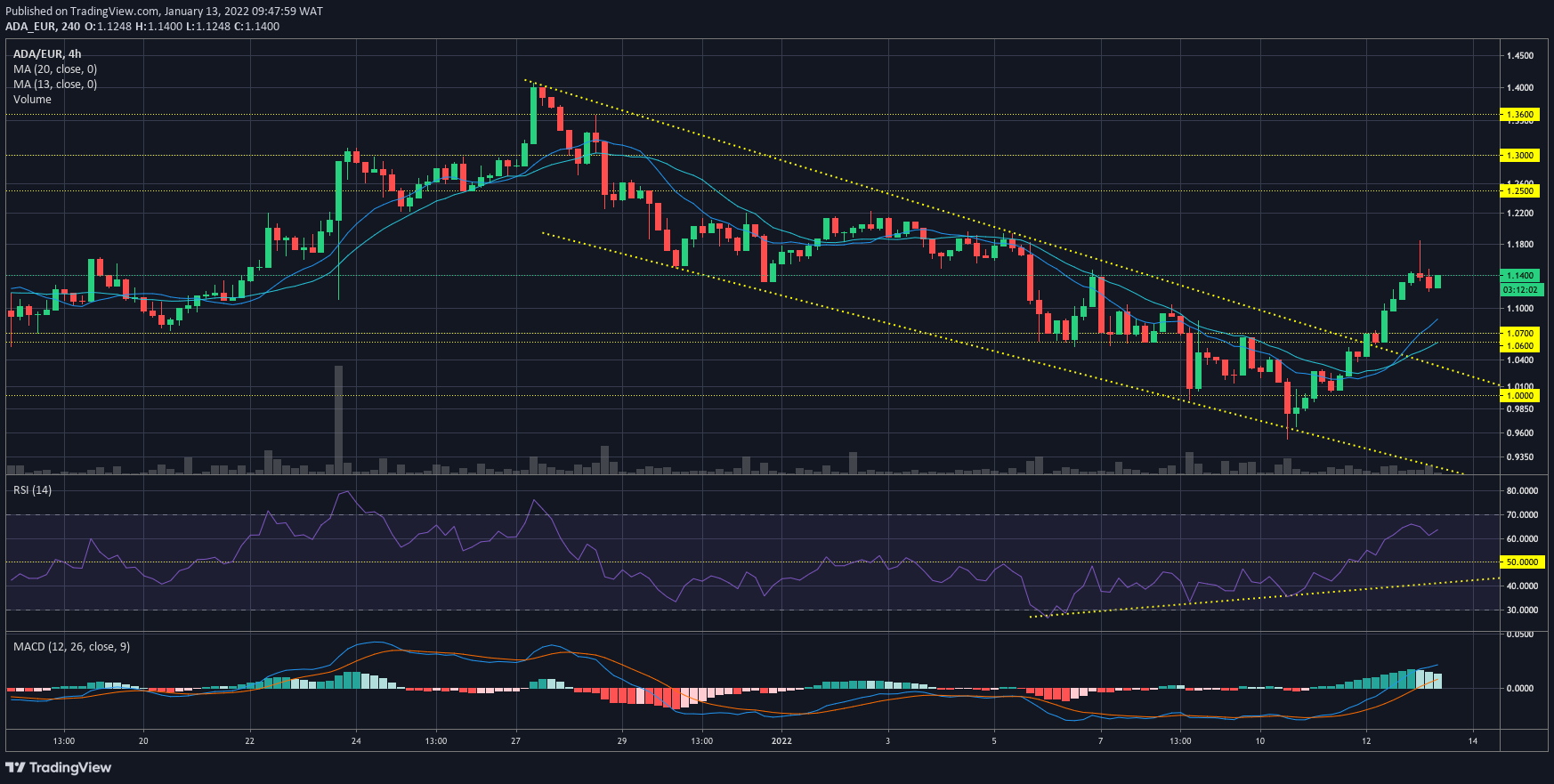 The crypto market is seeing an altcoins’ rebound rally recently, and Shiba Inu took part. During the past week, SHIB has seen its first positive trading days in almost a month.

Shiba Inu has gained approximately 20% of its value since December 10. The recovery is likely linked to the technical reversal of the market, which had been considered extremely oversold, and to the breakout from the descending triangle, which is considered a movement towards a bullish pattern. 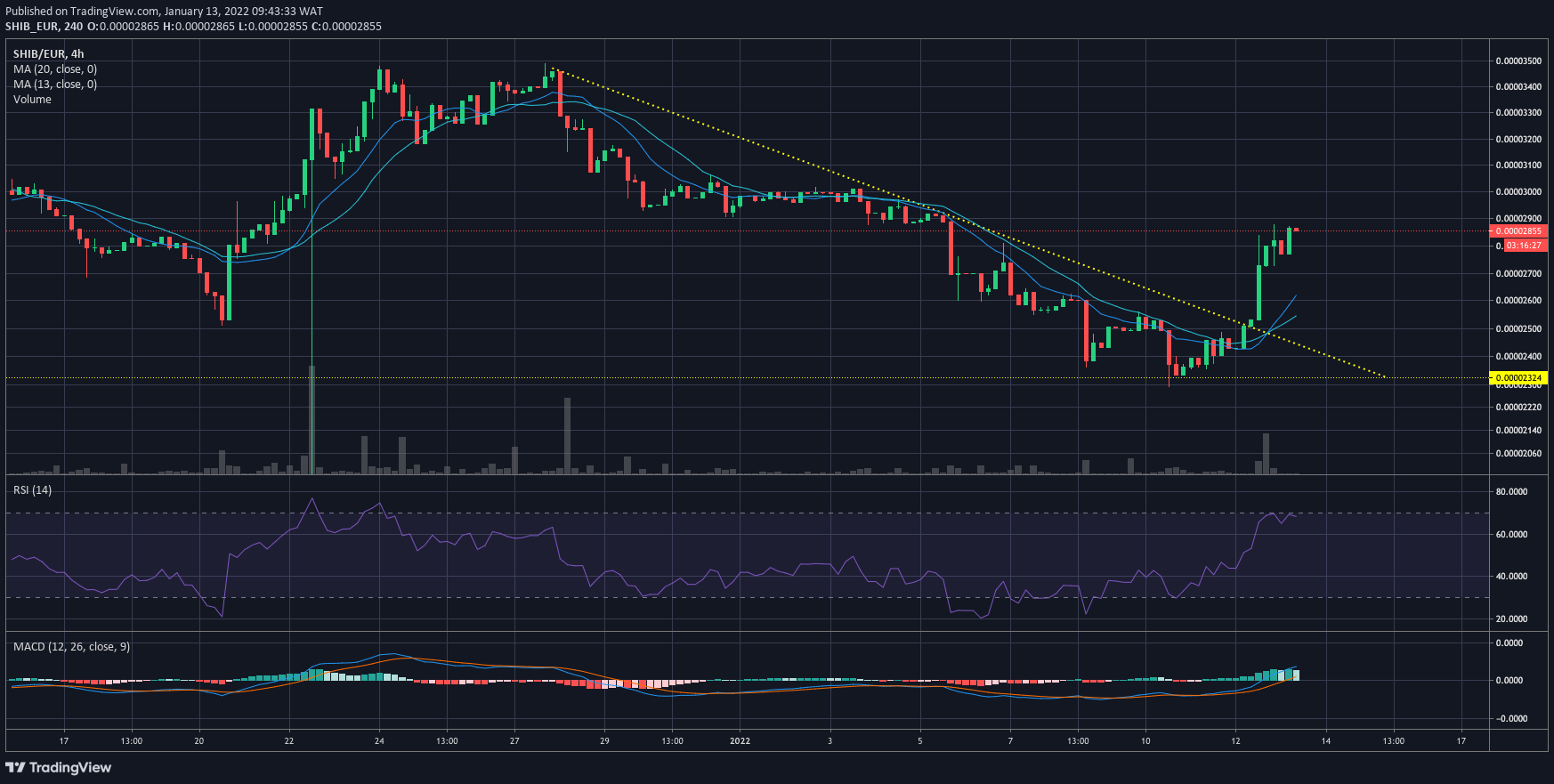 The memecoin DOGE is attempting to reverse from a bearish trend to a bullish one. DOGE’s price is on the verge of breaking out from the descending triangle, as buyers heavily bought the dip, pushing the price up some 20%. RSI is at 50 level, suggesting bullish momentum. 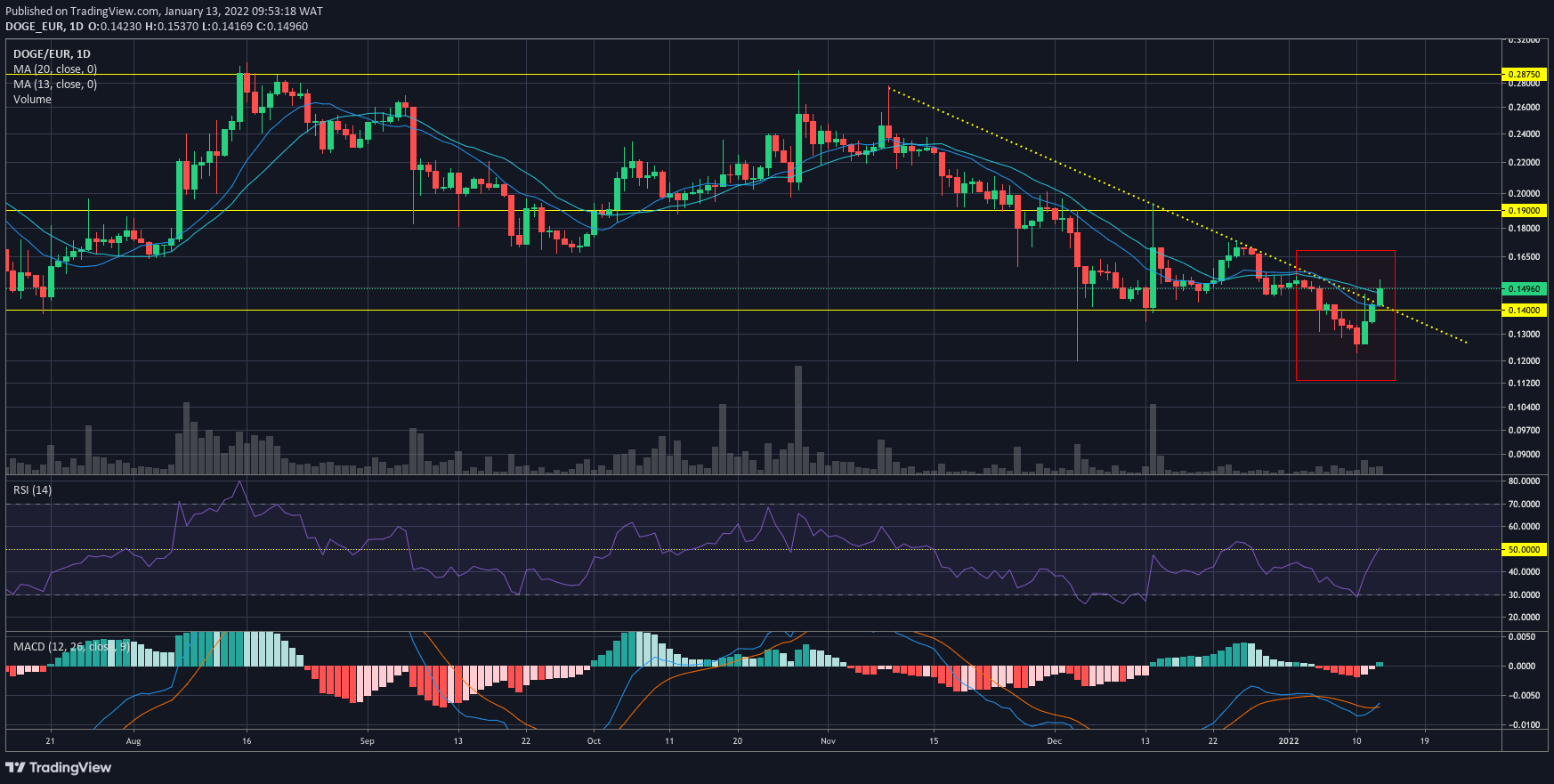 IOTA bulls are strongly defending the €0.9 support level, a recurring level for the token, considering that its price has gone back to this level several times in the past. IOTA is currently hovering just under the €1 mark, dropping from the €1.36 level after a recent sell-off. Both the momentum indicators RSI and MACD are showing positive movement and the potential for a long bullish run. 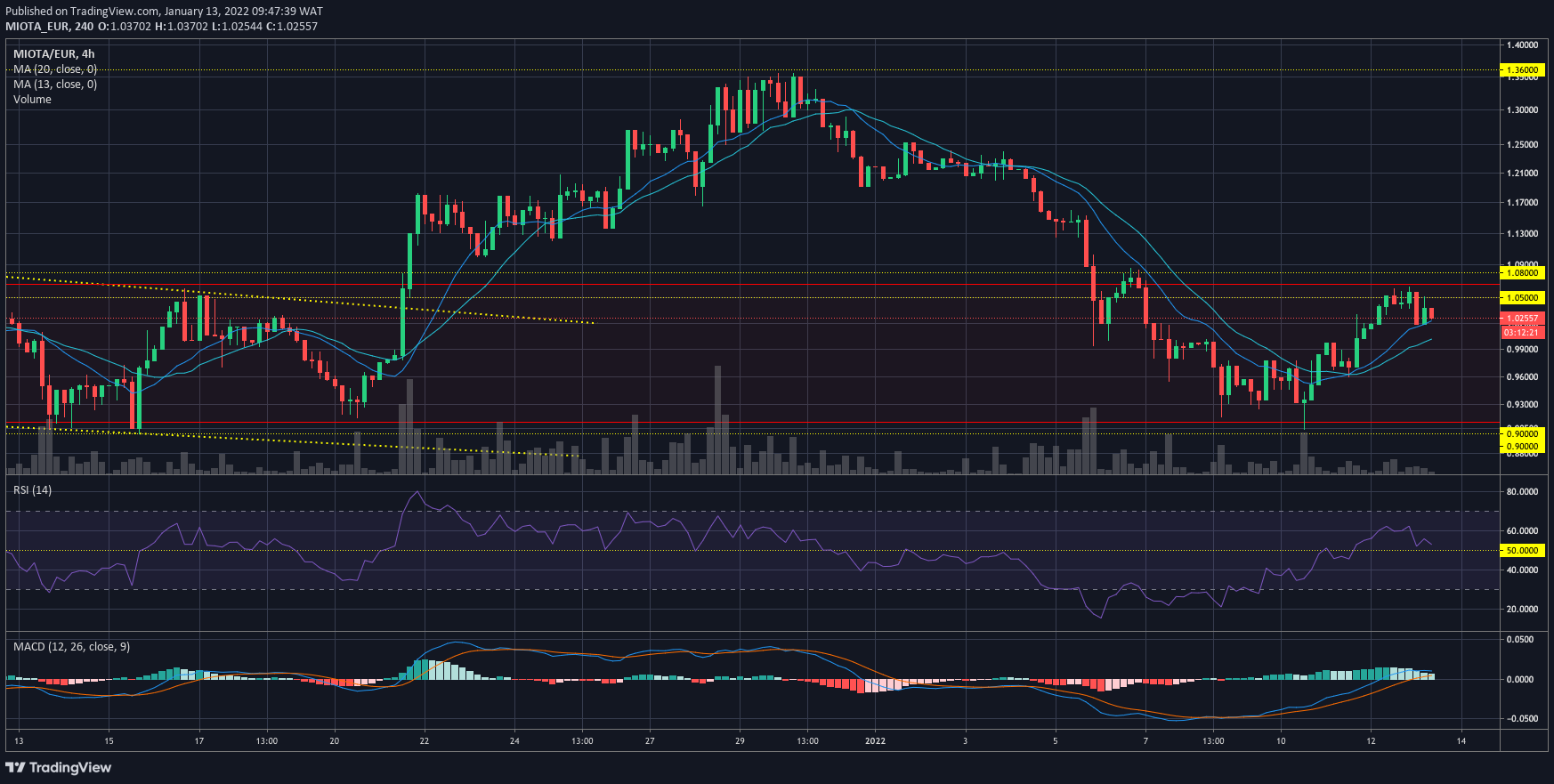 In Q2 of 2022, two new IOTA networks and their native coins, Shimmer (SMR) and Assembly (ASMB), are expected to be launched. Bitpanda has been allocating for IOTA holders on the platform and our cryptocurrency exchange Bitpanda Pro will also support the SMR & ASMB airdrops. You can find more information about how to participate in the SMR and ASMB airdrops in our blog post.