Another unfavourable week for the crypto market

The crypto market reported yet another negative week and saw a substantial drop over the weekend when many major cryptos suffered losses in double-digit percentages.

Trading sessions have been volatile lately, with the Crypto Fear & Greed Index still marking extreme fear levels at 20/100. The index reached its lowest level on January 8, when it recorded 10/100. Before the recent bearish reversal, the index hit 84/100 on November 9.

The crypto total market cap fell to €1.4B, a considerable drop from its all-time-high of €2.65B back in November, with Bitcoin dropping to a level lower than €30,000 for the first time since July 25.

The crypto total market cap is now at a six-month low having sunk to levels last seen in the summer. Since the beginning of 2022, the crypto market has plunged by around 26%. 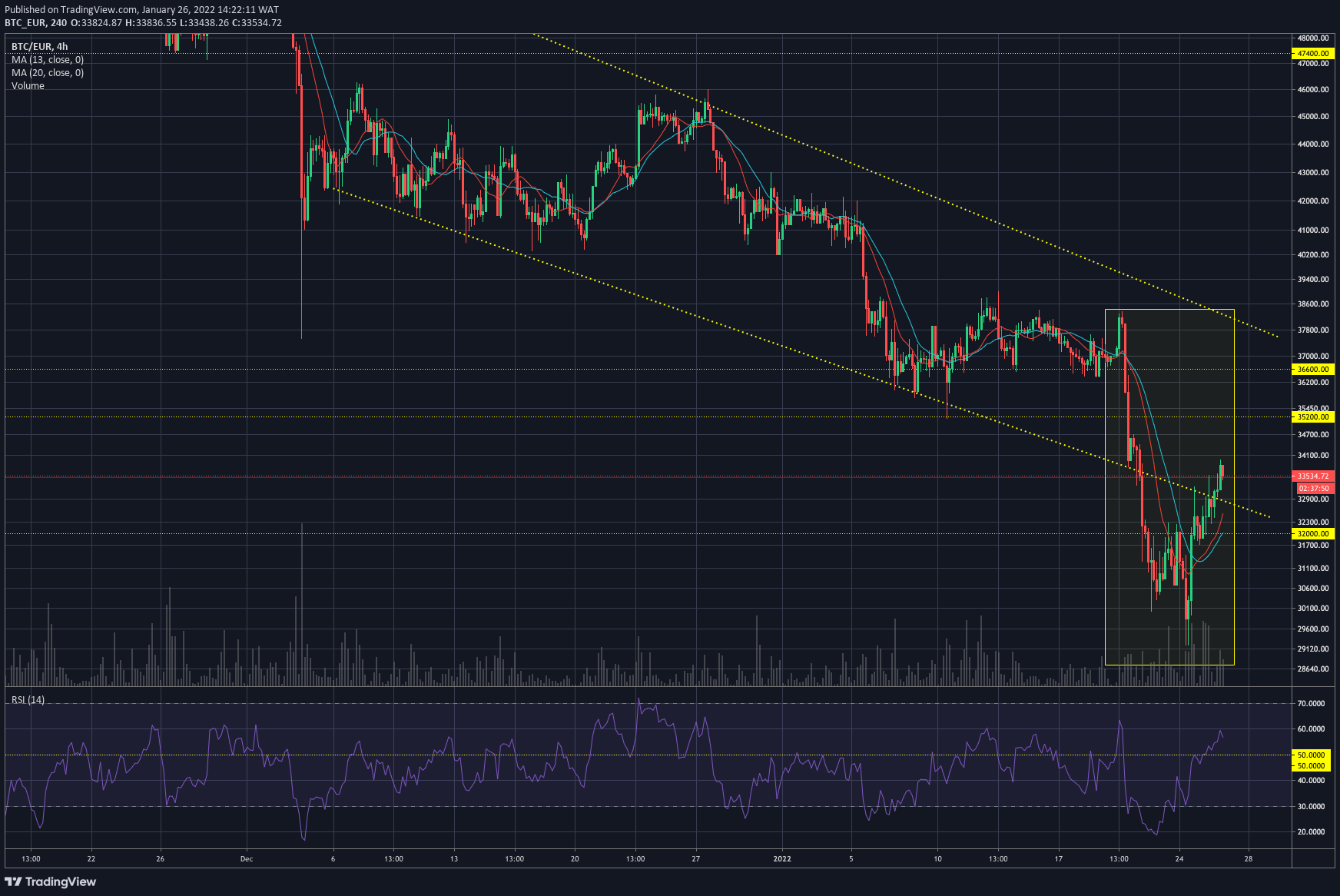 Bitcoin got caught up in the same spiral of global sell-offs that affected the stock market. However, while other major altcoins dropped significantly, such as Ethereum falling almost 25% in just a week, BTC lost less value in comparison.

On Monday, Bitcoin seemed to be heading down dramatically but instead, after touching a local low at the €29,000 level, it rebounded and managed to reverse from under the €30,000 level.

This is the third negative month in a row for the biggest crypto: Bitcoin is down over 45% from its November 2021 all-time-high, with a drop of 21% in January alone.

The daily chart shows that BTC’s price has created a long lower wick followed by a long upper wick. These two candles now offer support and resistance areas where buyers and sellers are placing most of their orders. 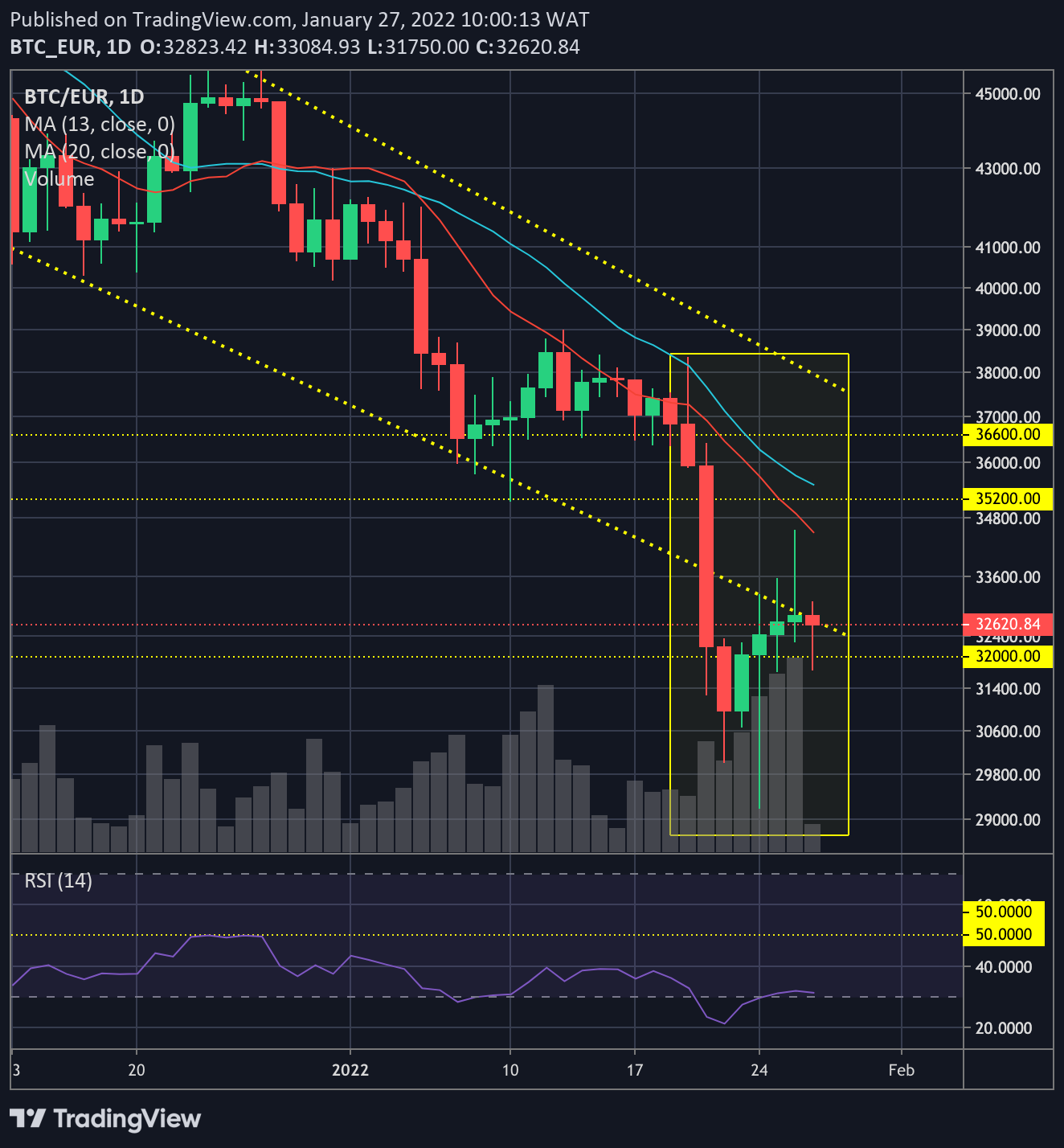 Both the crypto market and equity benchmarks tumbled down from the highs they reached, as the economy has been encountering some hardships. On top of the economic toll imposed by the pandemic, new monetary policies and inflation have also negatively affected the markets. Sociopolitical issues are also contributing to the bearish and generally pessimistic economic environment.

Currently, the tensions between Russia and Ukraine, the Middle Eastern conflicts and the uneasy US-China relationship are negatively affecting market sentiment. The FED’s monetary policy, regulatory discussions and activities also represent key drivers for market sentiment. Overall, the most prominent news on the topic has been the ban proposed by Russia’s central bank, which would ban using and mining cryptocurrencies.

Major altcoins have suffered significant losses since the start of 2022 and continued to do so over the past few days. Ethereum fell below €2,000 and touched the €1,900 support zone. ETH price is recovering along with the broader crypto market, but it’s still trading under important MA levels. Some are embracing an optimistic outlook on the market situation and believe these downtimes represent a good investment opportunity, especially for investors eager to expand their portfolios with top cryptos. 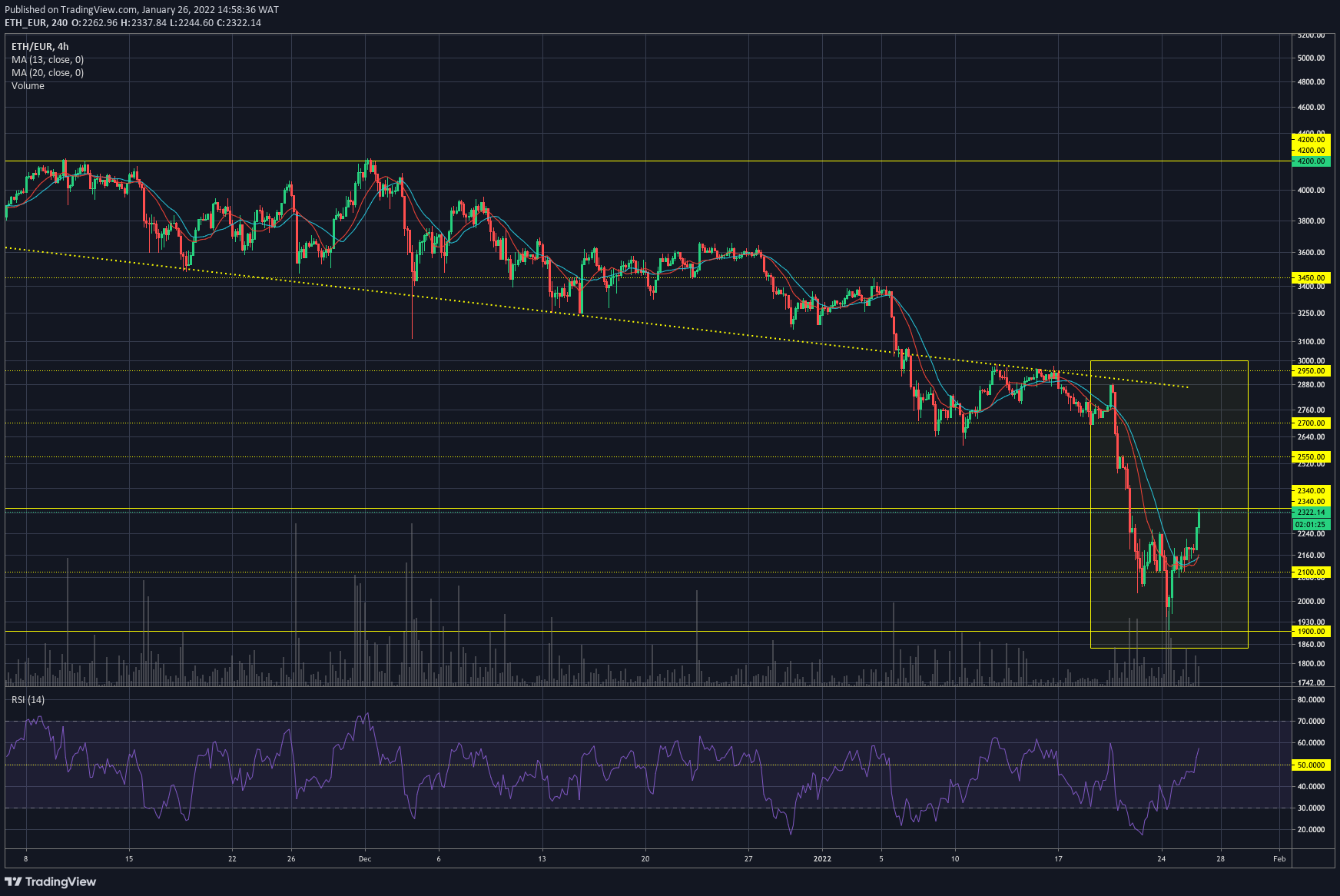 Most of the major altcoins are trading in tight ranges and forming a bottom. Altcoins seems to be following Bitcoin’s direction and it could take a few more days to see a new trend.

DOT’s price is hovering above support at €15.

DOT has been declining since early November 2021 after the hype around the first parachain auctions ended. With other parachains officially launching on Polkadot over the next few months, DOT has the potential to see a rise in both demand and token price as users look to get involved with the network. 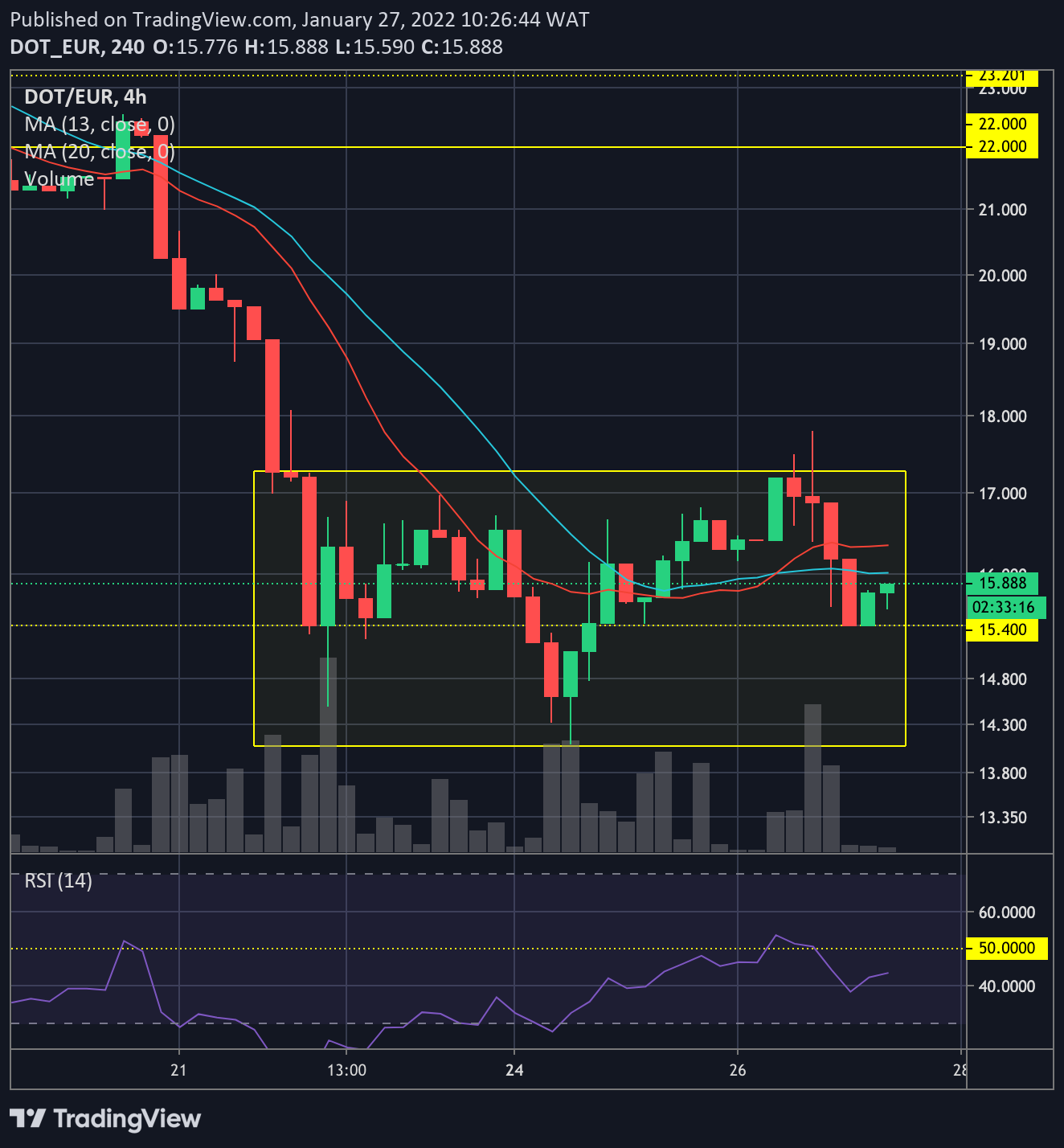 ADA found temporary support above €0.9 after a sharp decline. Long candlesticks suggest there are more buyers than sellers on these levels, but the price is still moving under 20 MA on the daily chart. 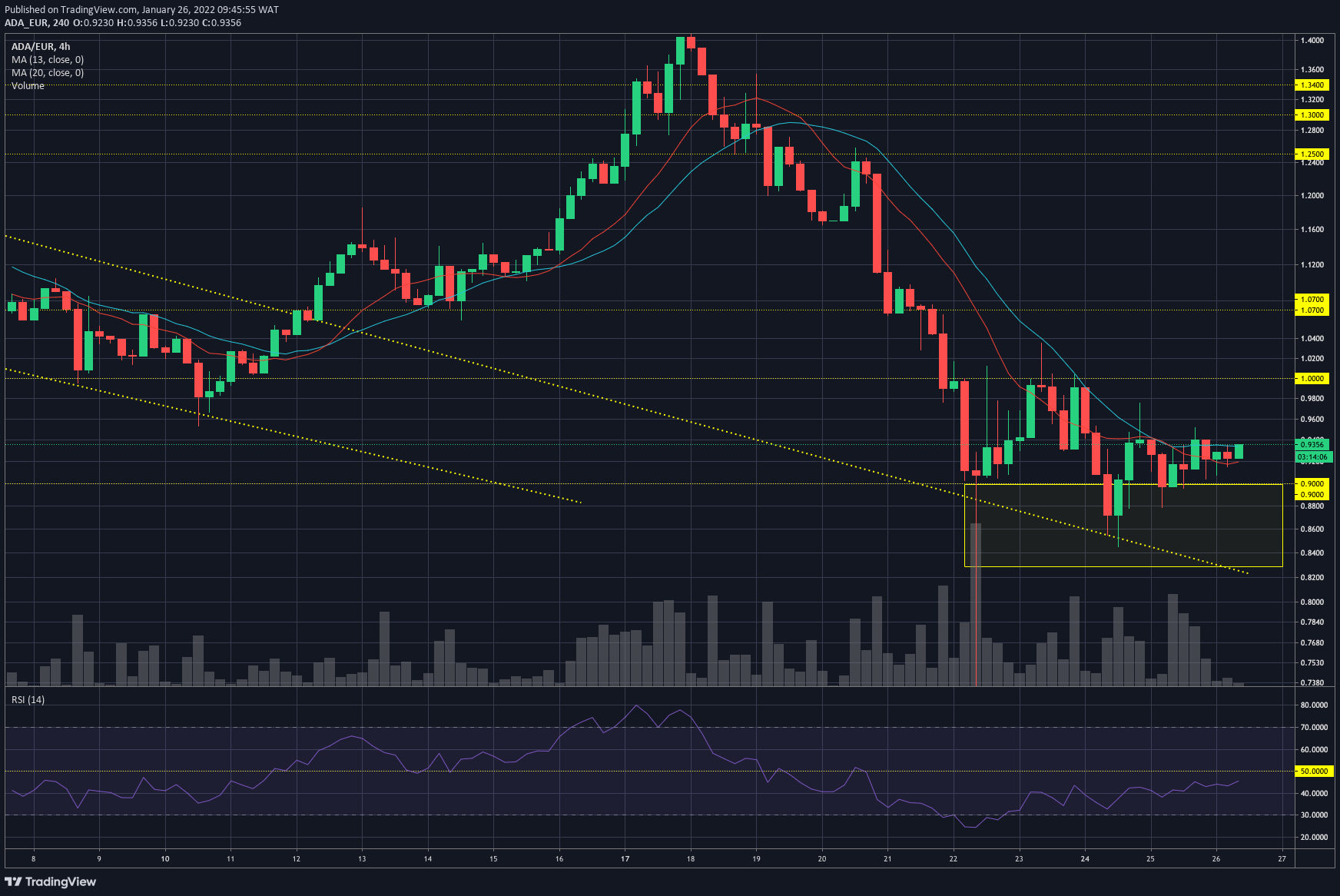 DOGE has surged some 10% intraday after the Twitter exchanges between Elon Musk and McDonald's escalated to the Tesla CEO offering to eat a happy meal on television if DOGE were to be offered as a valid payment method by the fast-food giant. DOGE’s price spiked but quickly lost momentum. 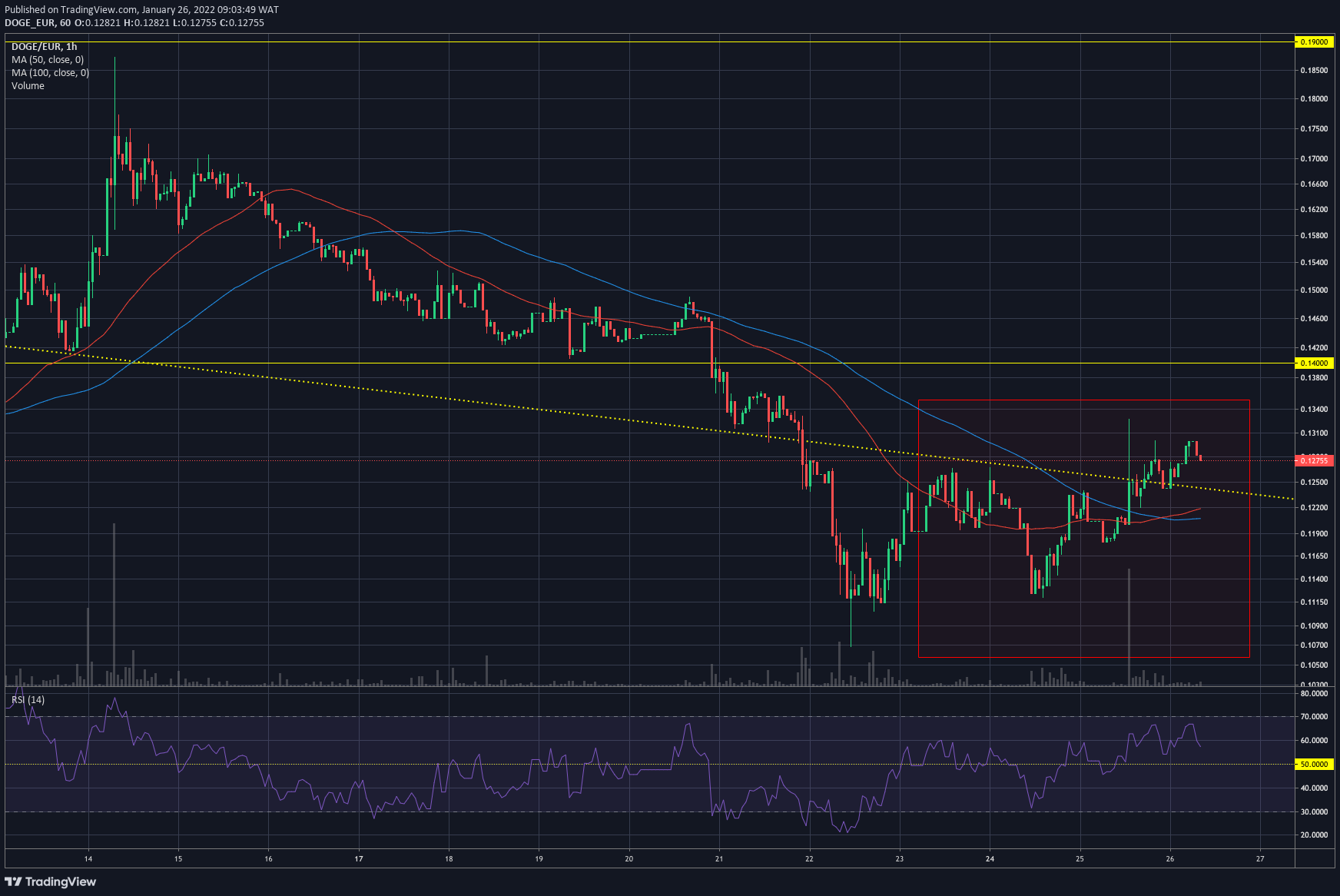 This content is for informational purposes only and not to be taken as financial advice. We highly recommend taking the time to do the necessary research before making any investment. Be aware that past performance is no indication of future results.