BTC sees its worst January since 2018

Bitcoin closed the first month of 2022 on a losing note, dropping about 20%, making this its worst January performance since 2018 when the price plunged 26.6%. Traders are hoping February will perform better, as the month has historically favoured the bulls. The only two negative monthly closes in February took place in 2014 and 2020.

In terms of volatility, the past week brought no major changes to the trend. The crypto market has been hovering with large daily swings and frequent intraday pullbacks. Bitcoin has been leading the way, moving in a falling wedge, with no break above the bullish trendline yet. However, it seems that long-term holders haven’t panicked despite the recent price declines. Long-term holders are net buyers such as institutions and so-called “whales”. 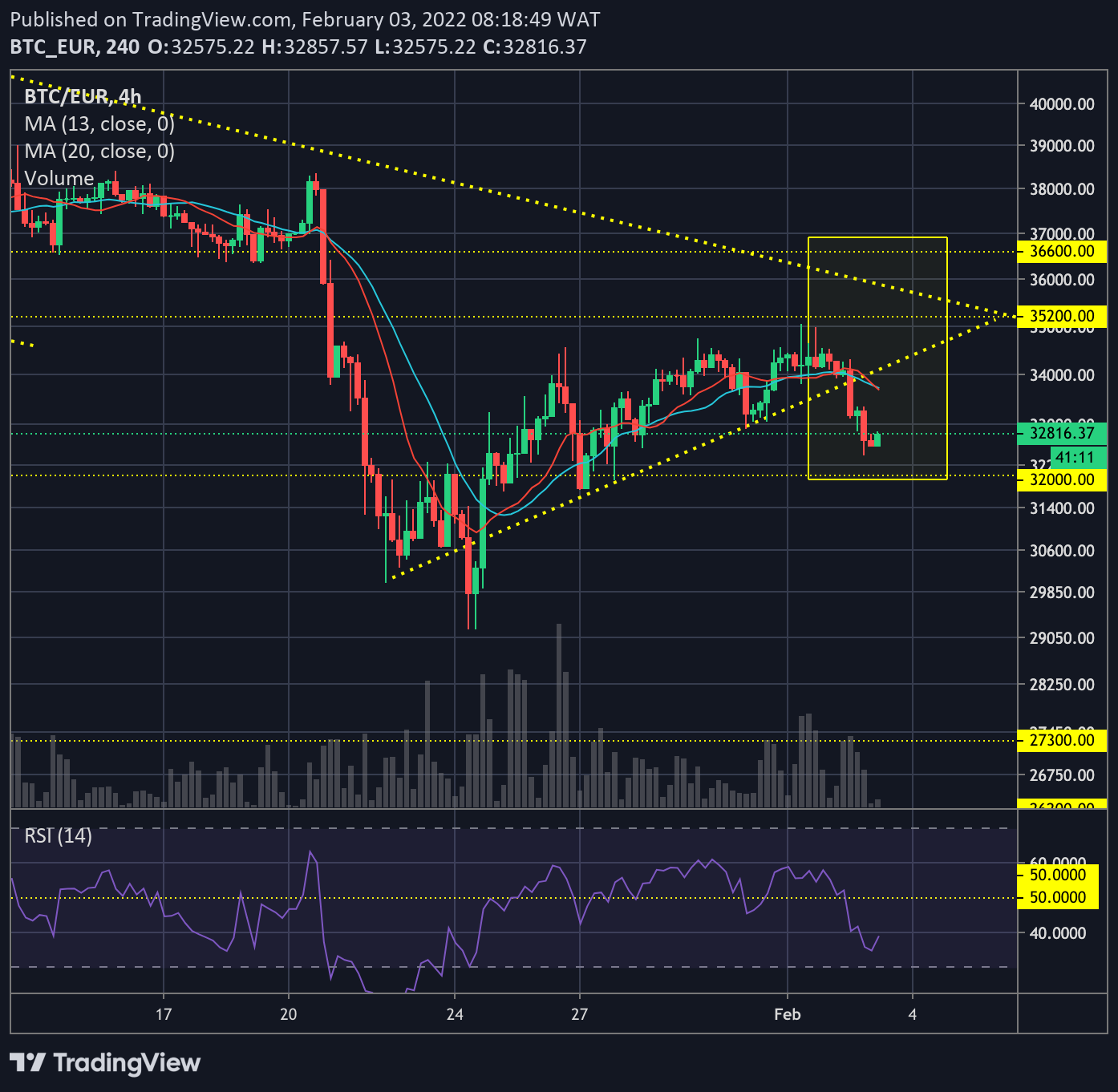 The previous BTC support level is now acting as a resistance level. Most of the candles closing over the €34,000 level have been marked by either small candle bodies or significant upper wicks, indicating a lack of bullish momentum in the price chart.

The Crypto Fear & Greed Index is moving up

The crypto market sentiment has slightly improved over the past few days, and the Fear & Greed Index reached 28/100. This result still indicates fear, but it’s a significant increase from the 12/100 of the previous week. This may indicate that the market has emerged from its lowest possible quadrant, which it has remained at for the past month. These 28 points on the scale add another week to the long-lasting correction that has been going on for the past 2.5 months.

Some investors look at the Crypto Fear & Greed Index to get an indication of when the market is supposedly “cheap”, i.e. when market sentiment is fearful. However, the Crypto Fear & Greed Index is not a timing indicator: it will not show the perfect timing for the bottom or top in a market. What it can give is an indication of when the bottoming process may be taking place, as sellers mostly leave the market in panic and fear.

The crypto market is struggling to recover as global financial markets continue to see increased volatility. BTC took a hit due to a wave of selling that pushed the price to €32,000, but BEST gained some value against the benchmark. The BEST/BTC pair is trading at 0.000024 BTC, up by around 7% from the beginning of the year and 70% since October 21, 2021. 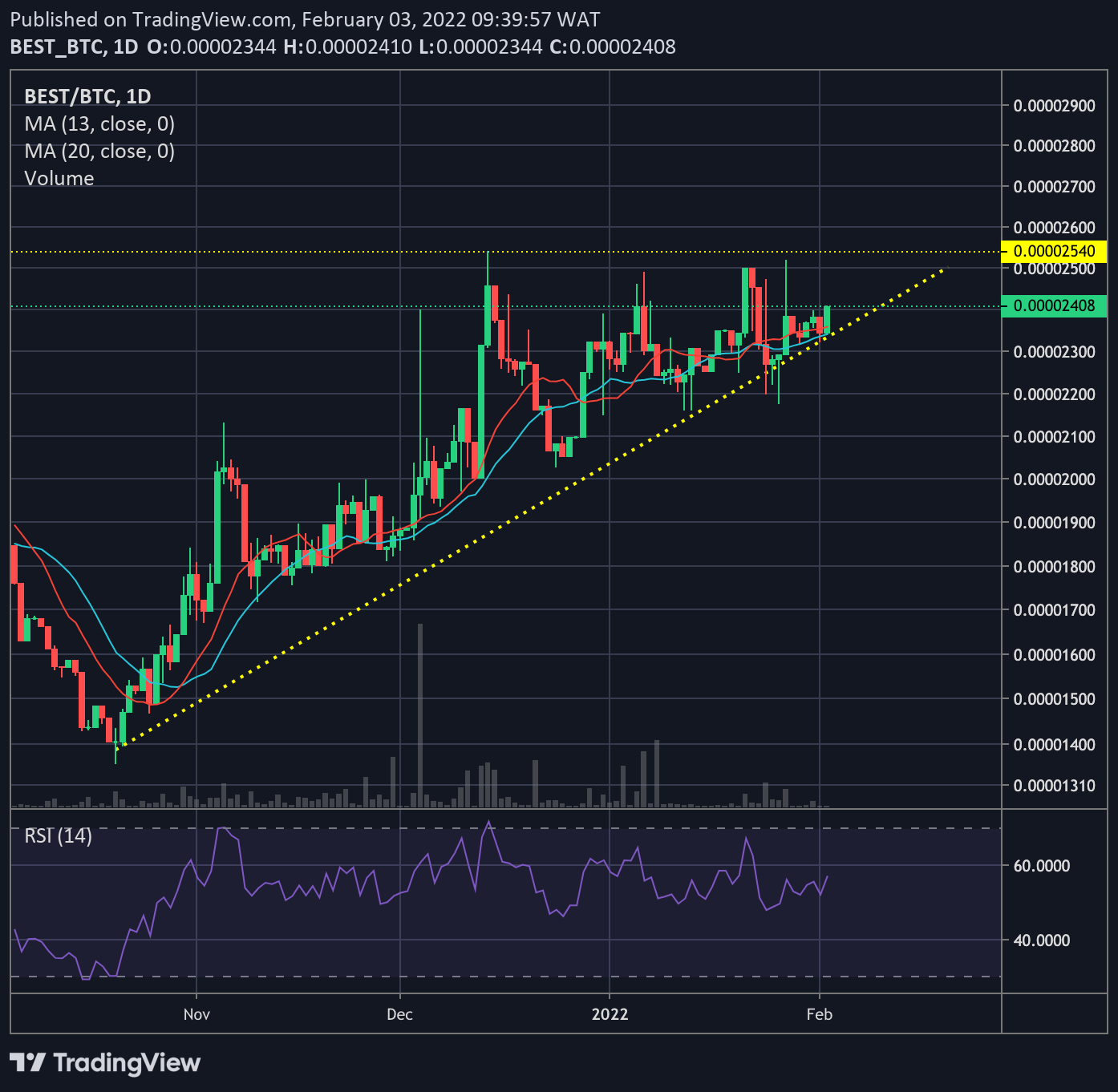 Some major altcoins are showing early signs of accumulation. LINK surged some 10% on Sunday and managed to break the €15 resistance level. However, it failed to flip resistance into support and dropped back to €13.85. LINK has generally been moving in this range since January 20. 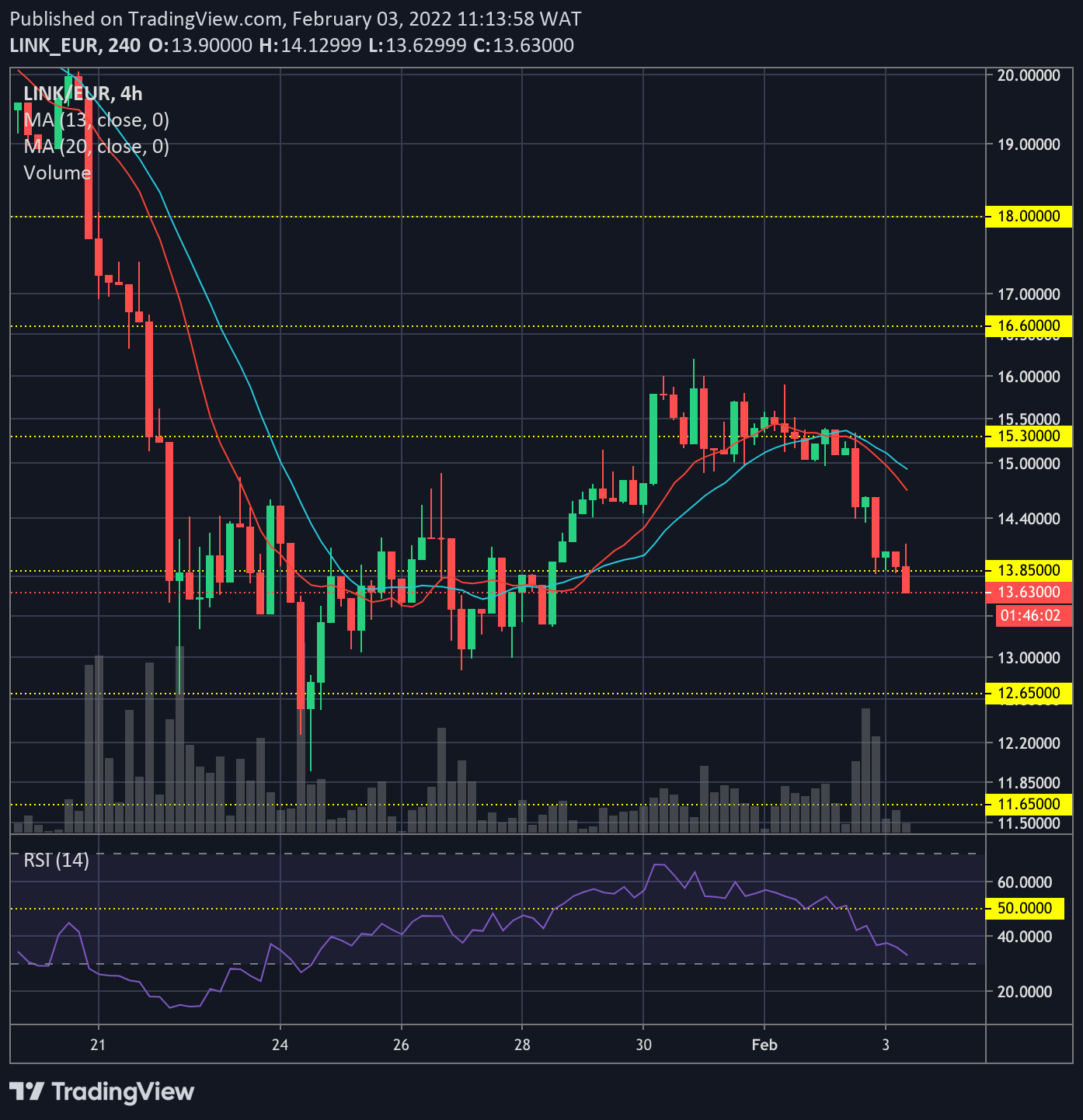 Similarly to Bitcoin and more major altcoins, Ethereum closed bearishly in the monthly chart. However, it closed the first day of February bullishly, with a long candlewick, suggesting it should keep building more upside pressure from this region. ETH’s price is moving slightly bullishly on a lower time frame but is still lacking extensive buying power. 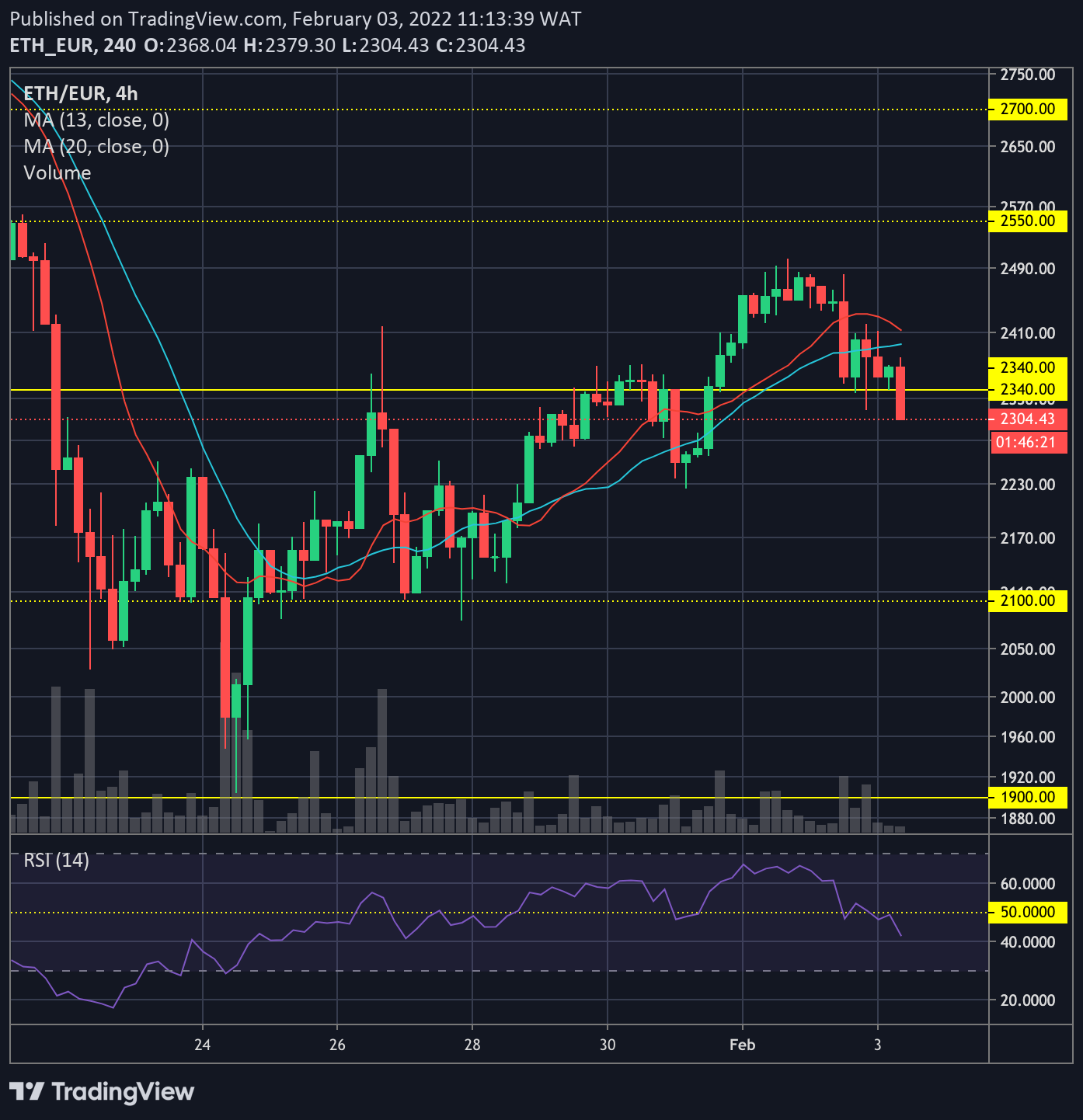 DOT’s price formed strong support above €15 and managed to surge up to €18 but failed to maintain the bullish momentum. In the past months, Polkadot has been auctioning its parachains and has just closed the ninth auction with a winning project called Centrifuge. 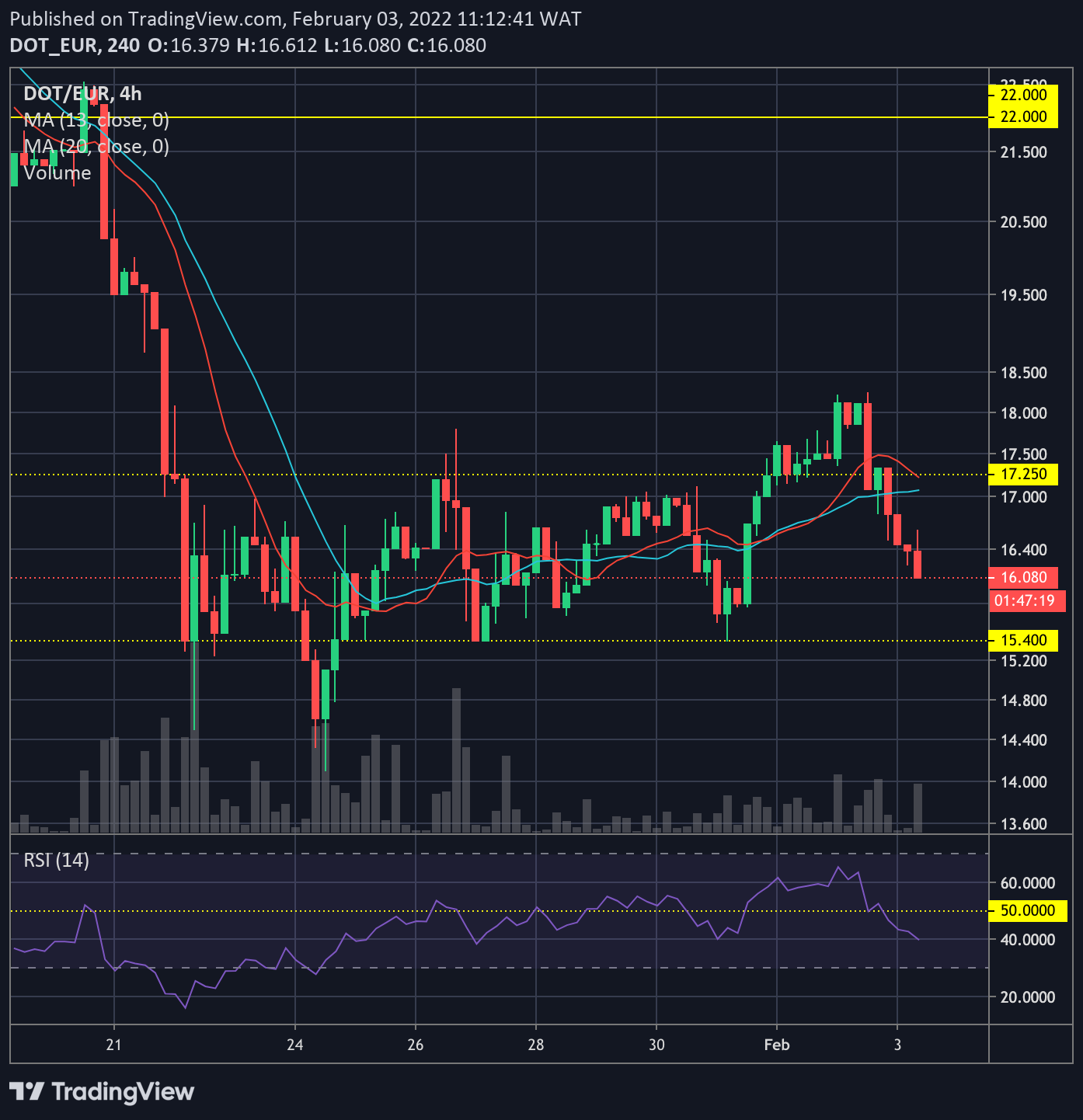 Centrifuge is a protocol that aims to create a system for tokenising traditional financial assets, such as real estate royalties and cash-advance invoices so that they can be exchanged on the blockchain.

The price of Cardano’s native token ADA managed to stabilise at just under €1. ADA has been trading flat for the past two weeks with long wicks on daily candles, suggesting buyers have strong bids above the €0.9 levels. The RSI is slowly picking up from the oversold position, but it is still moving below 50, indicating bearish momentum. 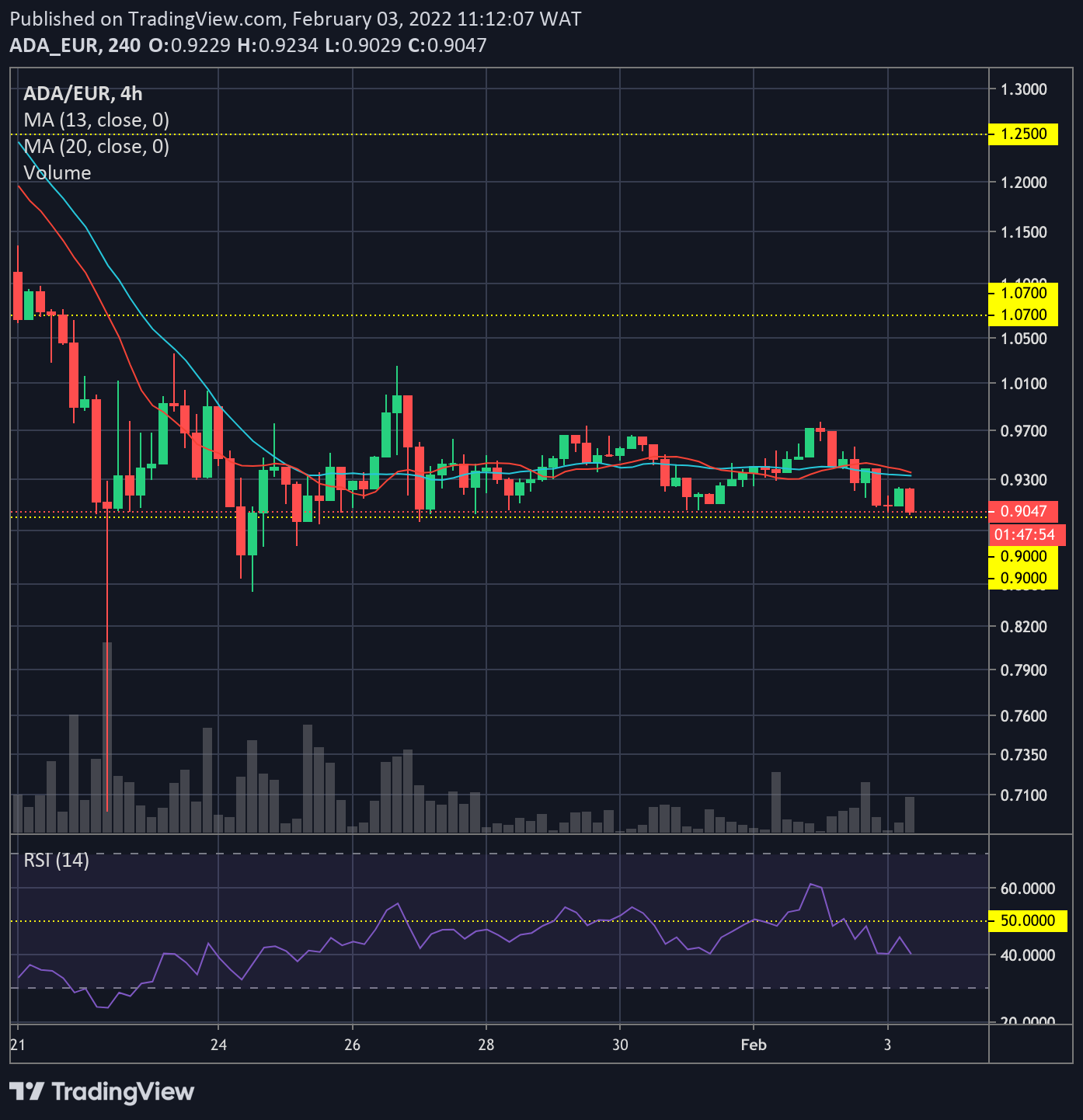 Cardano has entered the Basho era, the third stage of its roadmap. The new proposal focuses on the network’s performance and scalability. Input-Output, the developer team behind Cardano, is on track to increase the block size by a further 8KB, taking it from 72KB to 80KB. A bigger block size will enable the network to execute more transactions and reduce the incidence of issues associated with heavy traffic.