Mixed signals on the market

During the past week, Bitcoin has posted mixed candles and mostly moved in range. Last week’s Bitcoin candle closure was bearish and most altcoins closed on the lower end as well. Factors such as the current geopolitical tensions between Russia and Ukraine, rising inflation, interest rate speculation and the alleged correlation between BTC and the U.S. stock market are affecting Bitcoin’s price movements. For the past few weeks, each of these factors have promoted fear and risk-off selling. The Crypto Fear & Greed index is at 30 points out of 100, down from the 44 of the previous week, indicating the current market sentiment is in the fear zone.

Some fundamental data seems bullish as Bitcoin’s hashrate surged by over 31% over the weekend, reaching an all-time-high of 248.11 EH/s (exahashes per second). The hashrate refers to the amount of computational power used to verify transactions. 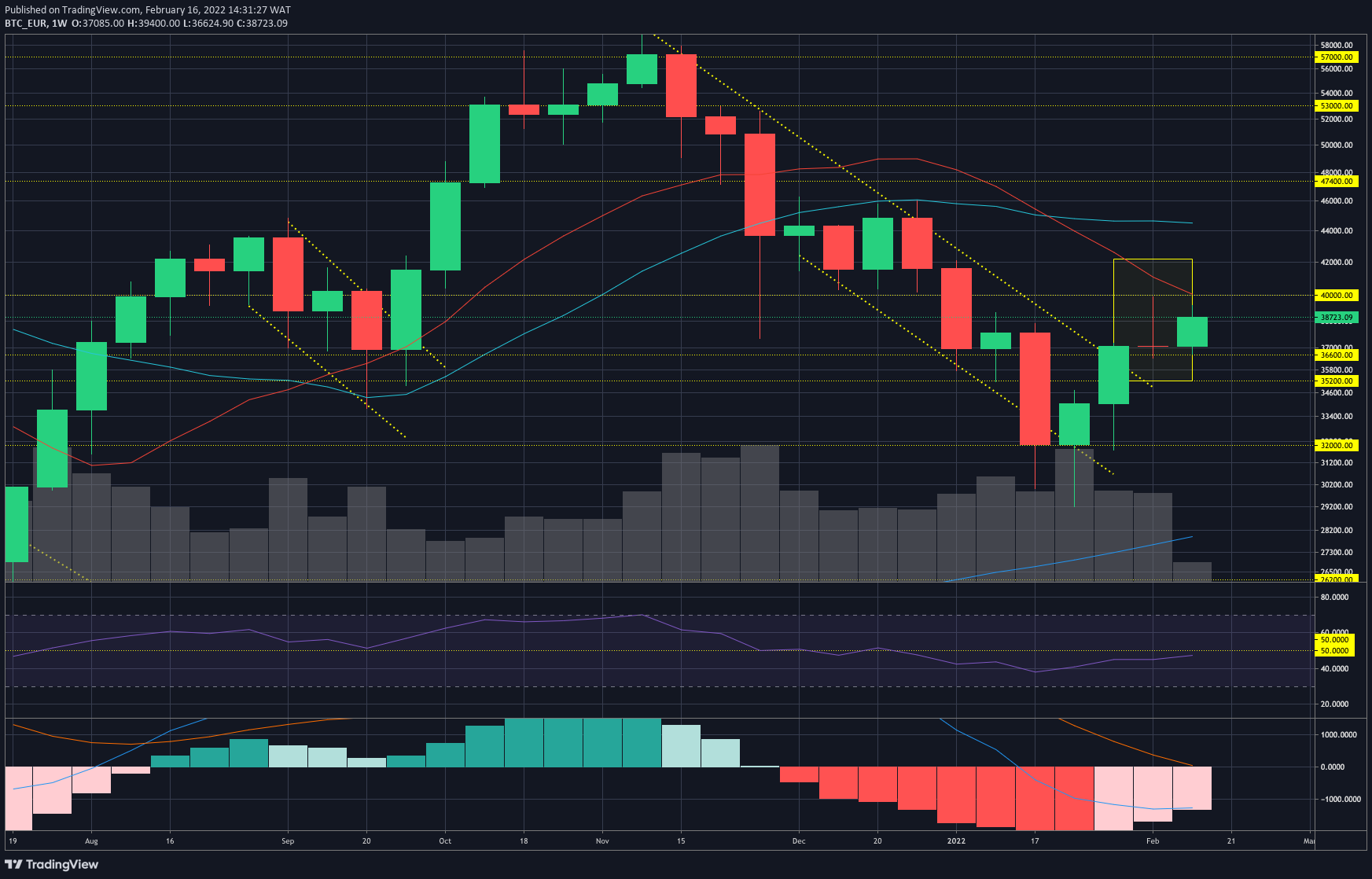 BTC weekly chart closed with a candlestick that could be interpreted as either a shooting star or a gravestone doji formation. The upper wick indicates the bearish pressure and rejection from the highs at the €40,000 resistance level.

The lower time frame chart shows that the prevailing trend hasn’t changed significantly in the past week, as Bitcoin is moving within the €35,200 and €40,000 range. The €40,000 level has been an important resistance area in the past and it represents an additional barrier to break through. 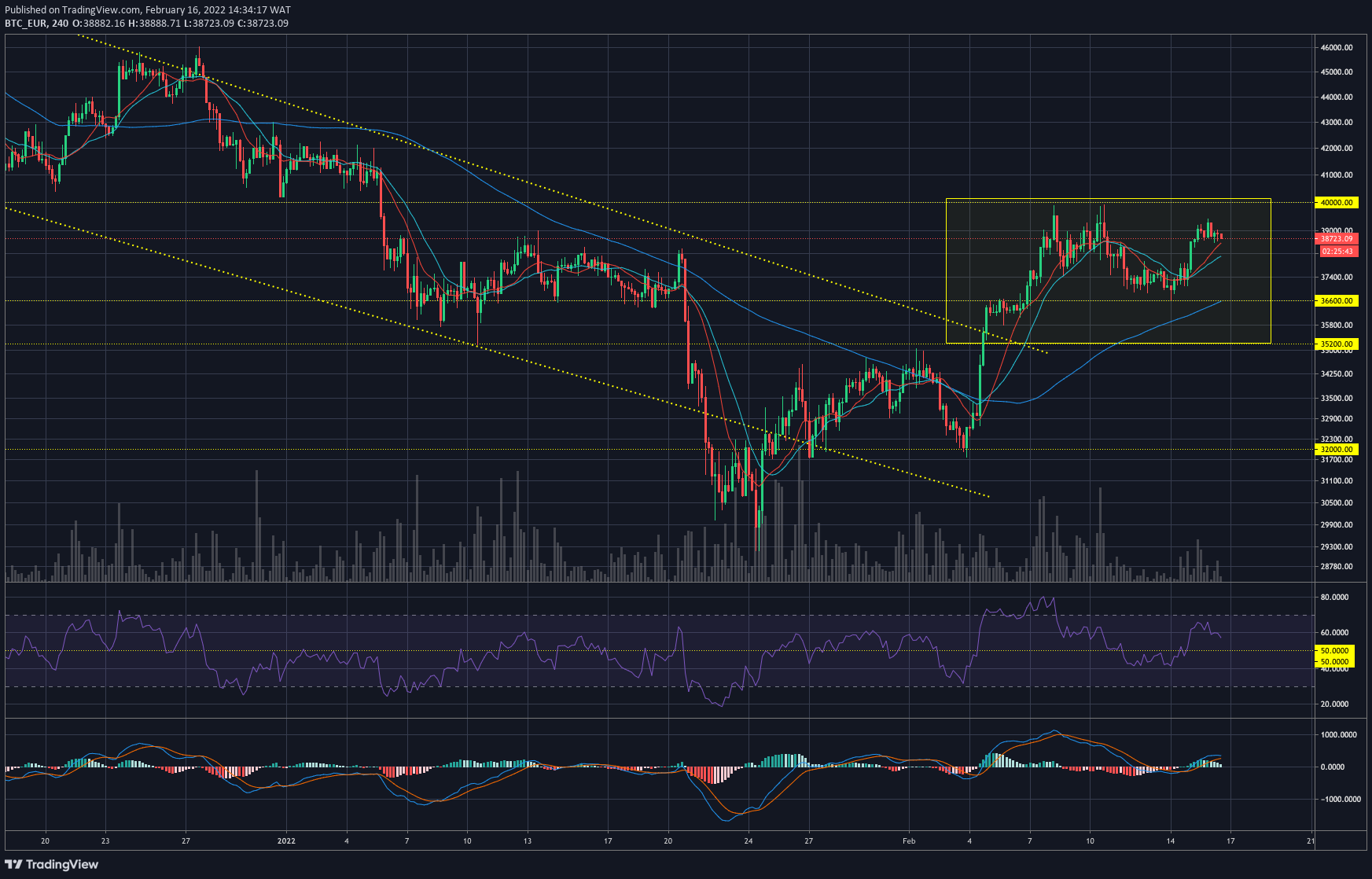 The overall cryptocurrency market cap now stands at around €1.7 trillion and Bitcoin’s dominance rate slightly increased over the week and is now at 42.5%. This value shows how much of the total crypto market cap consists of Bitcoin, suggesting that in these times of uncertainty, traders seem to prefer Bitcoin to altcoins.

Most altcoins are seeing choppy range movement as Bitcoin is consolidating with no clear direction. Ethereum closed bearishly in the weekly chart and settled below the trendline resistance level. ETH’s price is consolidating above the €2,500, but its moving range is relatively wide as the upper resistance is at the €2,700 level, while its support level is around €2,350. 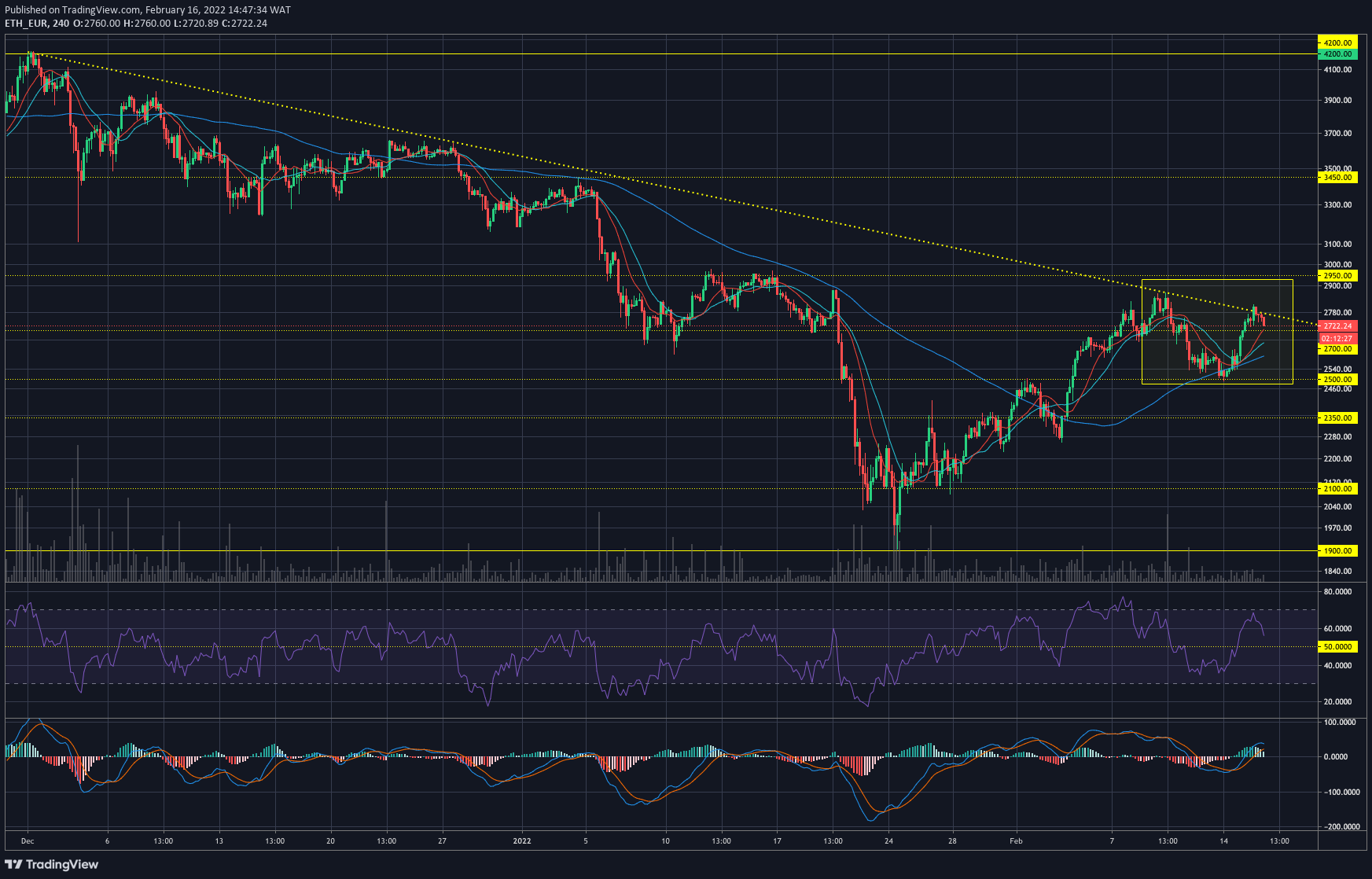 Consolidation (in technical analysis) refers to the fluctuation of an asset within a well-defined pattern of trading levels. It is generally interpreted as a sign of indecisiveness of the market, which ends when the asset's price moves above or below the trading pattern. The consolidation process also gives traders the opportunity to range trade and try to acquire short-term gains. Currently, major altcoins seem to be undergoing a consolidation process. 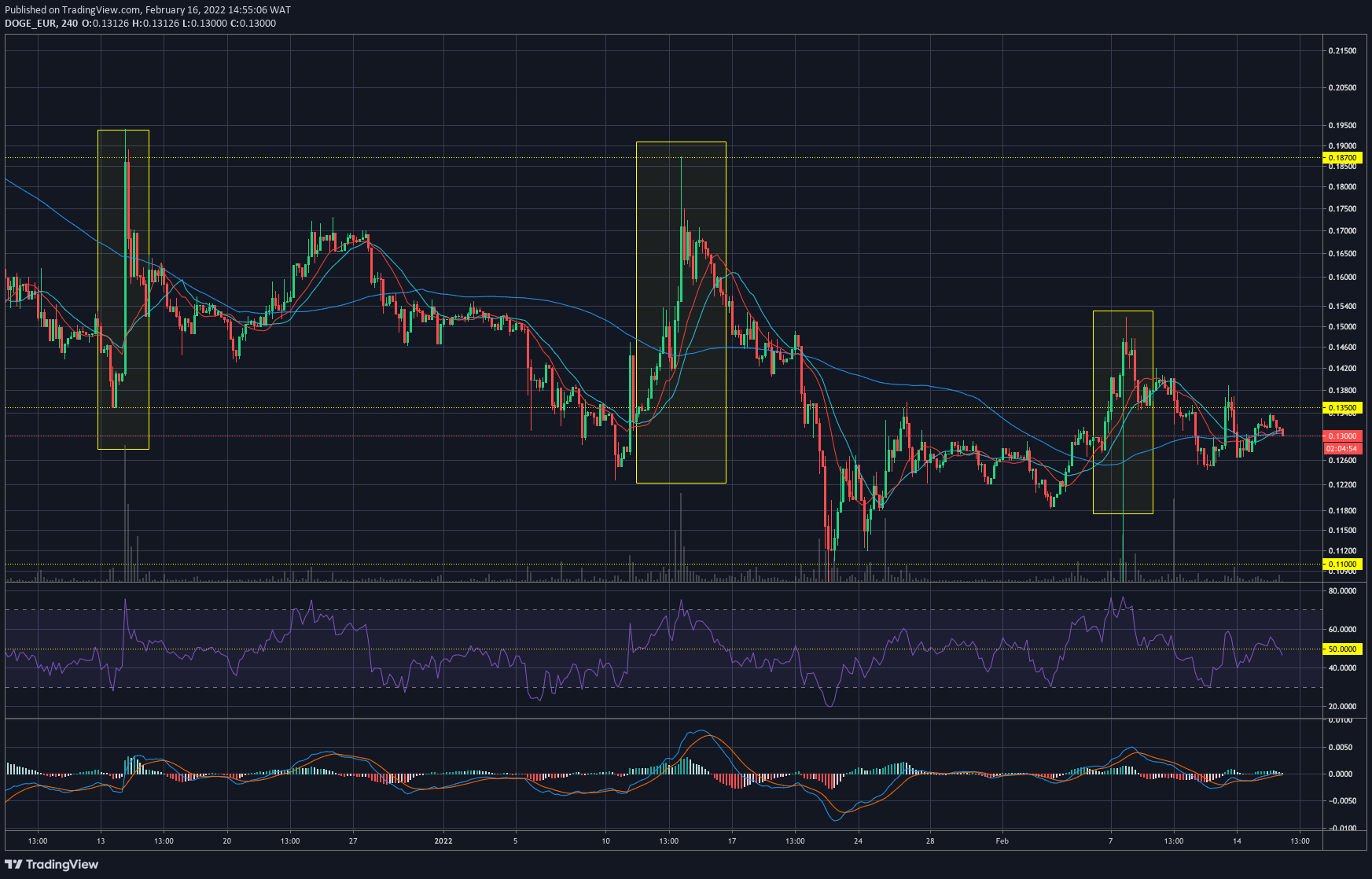 DOT turned away from the downtrend direction and is trading between support levels of €15.4 and €17.25 respectively. The RSI momentum indicator is in negative territory, suggesting that bears are in command. 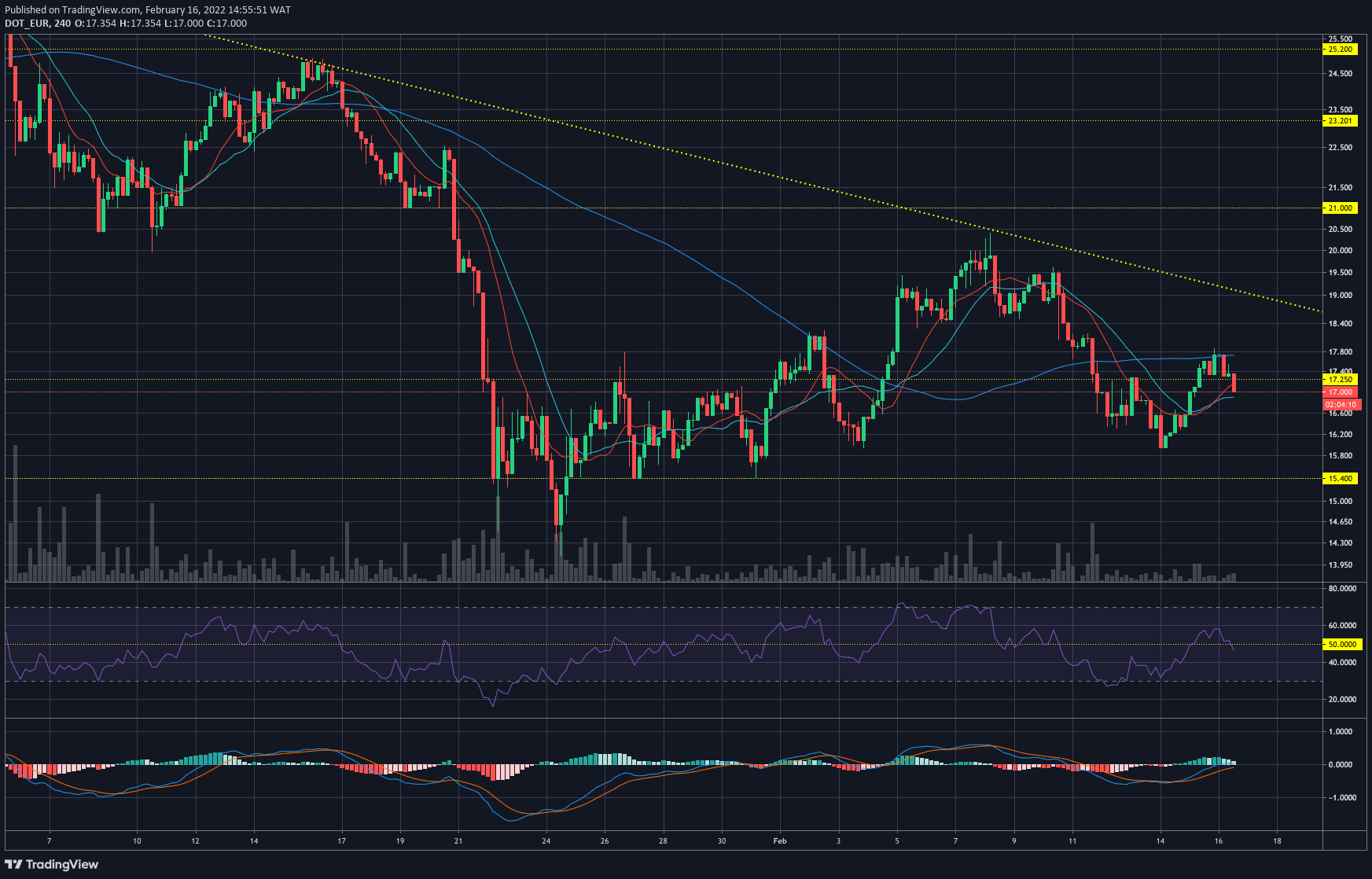 ADA’s price continues to bounce off the support level of €0.9. Generally, the periods of low volatility are followed by range expansions. Traders are waiting for a spark in momentum that could sustain a rally above the resistance level at €1.10. 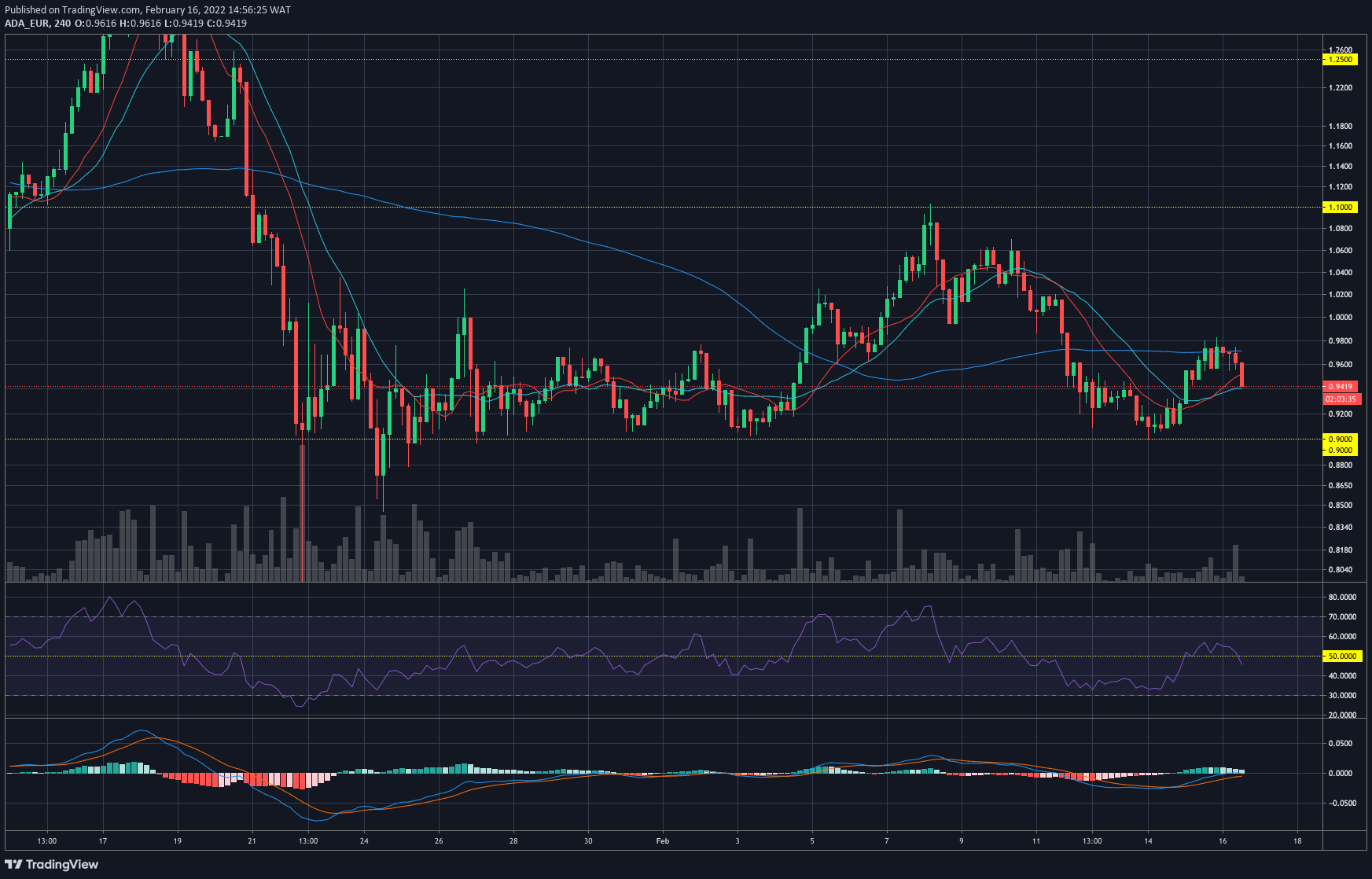 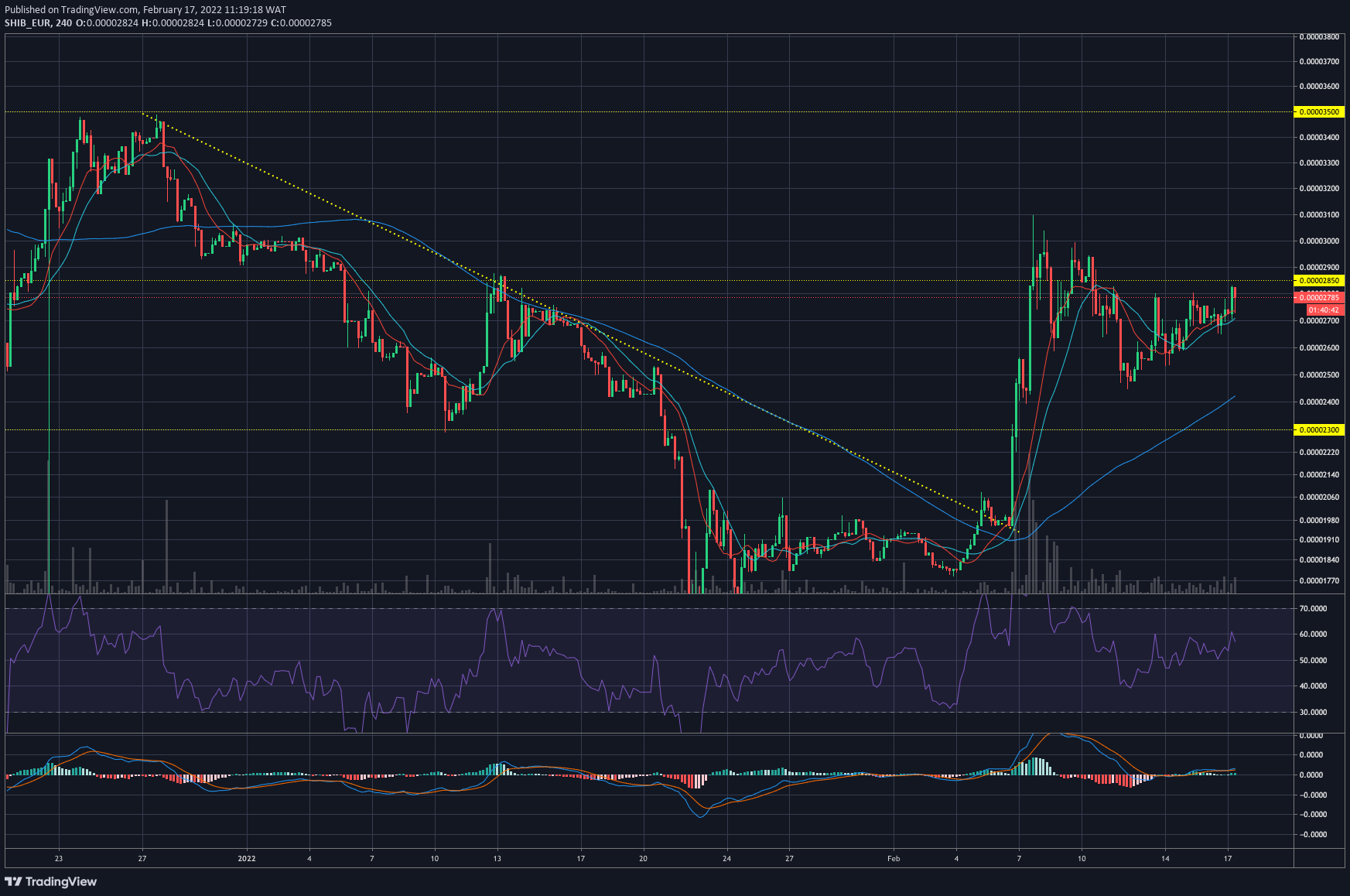 SHIB has maintained its place in the top 15 cryptocurrencies by market cap for a couple of months now. It has also gained several more holders as an increasing number of retail investors are entering the market and discovering the asset over SHIB’s vast users community.