The Russian invasion of Ukraine is causing turmoil in the markets

The past seven days were riddled with volatility, primarily caused by geopolitical turmoil. Decades after the last war on European ground, the conflict in Eastern Europe, where Russia has invaded Ukraine, is receiving worldwide attention. The war has brought shock and turmoil to the wider financial markets, including crypto. In the financial markets, steep indices sell-offs occured, while recoveries were only partial so far. Bitcoin plunged to a €30,750 low, before bouncing back to €40,000. All major altcoins followed the biggest crypto in volatile trading sessions, with double-digit percentages losses, followed by a rapid recovery at the beginning of the week. The stock markets bounced back after the European Union, the United States, and many other countries announced they will issue harsh sanctions on Russia.

Over the past few days, Bitcoin moved bullishly, together with other major altcoins and global stock indexes, and on Monday morning it printed its biggest daily candle in more than a year. Buyers pushed the price up by around €5,000, with BTC reaching €40,000. The current war could add more bullish pressure on Bitcoin. With the Russian ruble plummeting in light of the sanctions on Russia, crypto is attracting more buyers as a possible hedge against the failure of local currencies. On-chain data shows that the number of Bitcoin addresses reached a new all-time high, now with more than 40 million addresses, a sign that crypto adoption is rapidly on the rise. 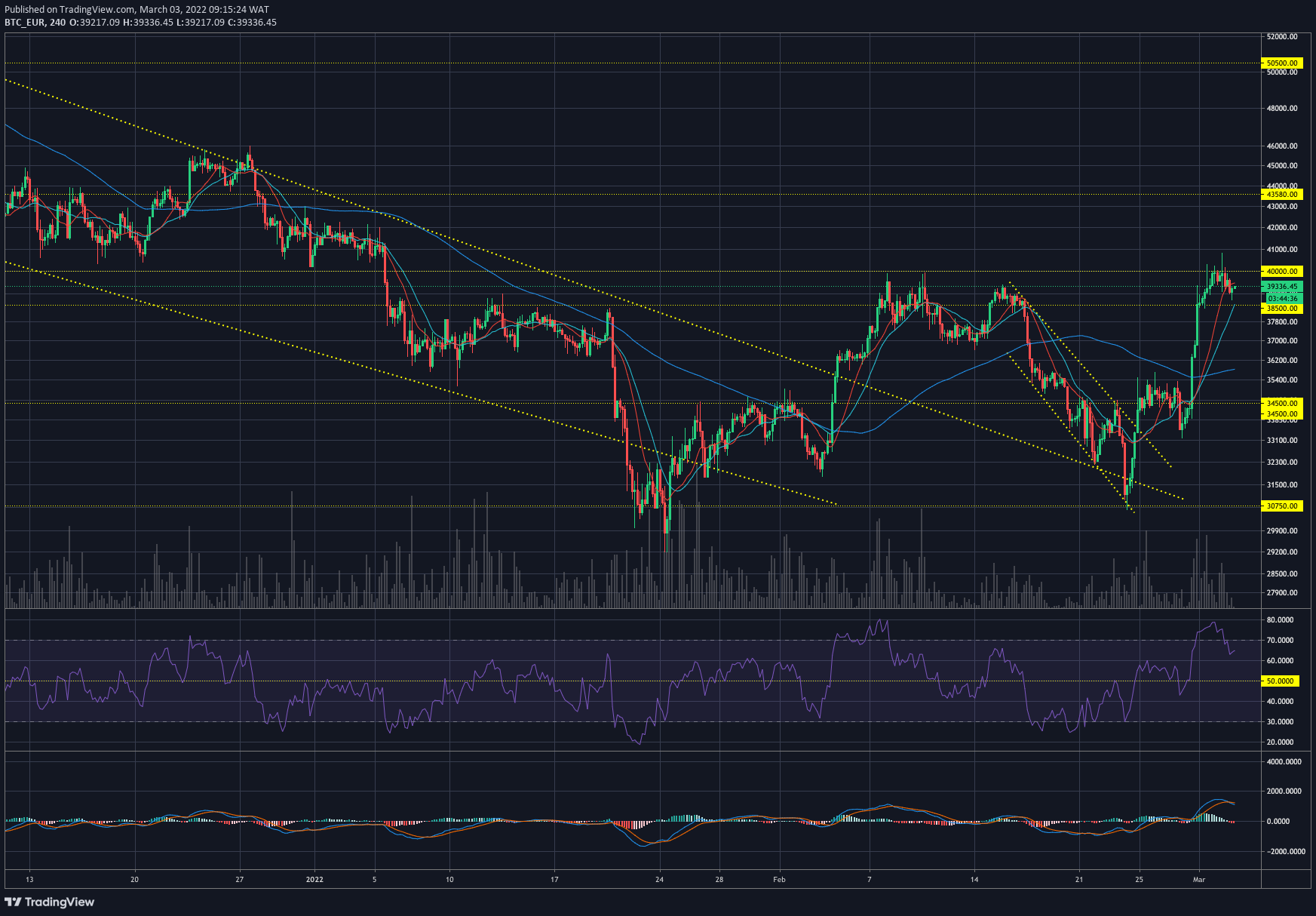 This week, Bitcoin’s price reached its highest value in almost 3 weeks, but some altcoins saw even higher gains. The market cap of the biggest crypto is currently hovering around €750B, while the total crypto market cap is currently around €1,7T. BTC’s movement could be leading the broader crypto market to a more volatile, “rollercoaster” trading trend.

Altcoins are mostly back in the green

Major altcoins have been trading in the green in the last seven days, with massive spikes caused by volatility on some days.

Ethereum bulls pushed the ETH price over the trendline resistance level to €2,700, its highest value in three weeks. ETH will likely follow Bitcoin’s price actions and fundamental developments. To avoid a “fakeout”, the daily candle closing should remain above the trendline support level.

Cardano followed in a bullish move and flipped the long term trendline resistance level, touching the local high of €0.9. A breakout above this level will put ADA in a bullish area. The long wick on March 1 suggests that many sellers lie in the €0.85-to-€0.9 level area. 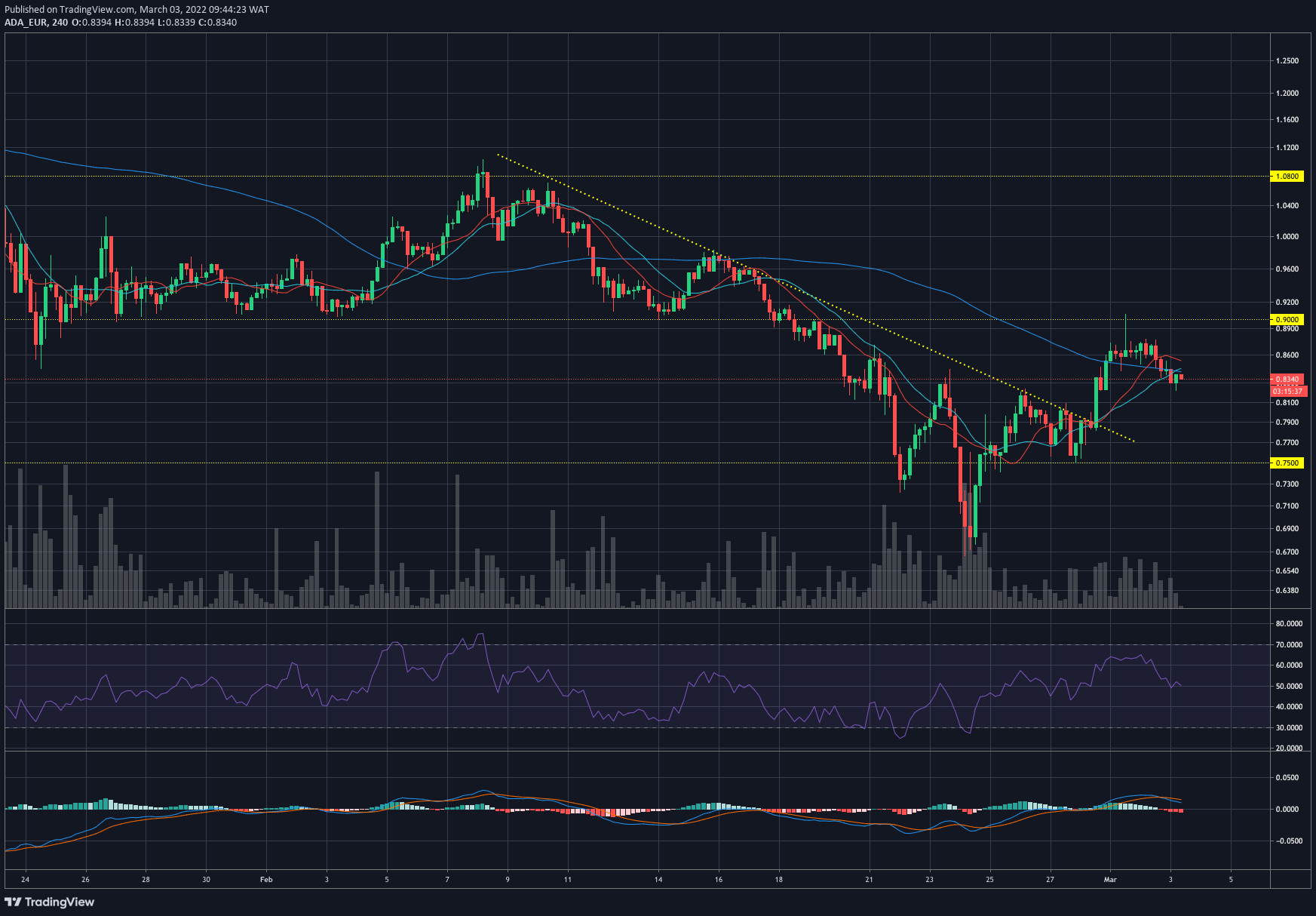 Ripple rose above the downtrend line on February 22. XRP’s price has turned down from the €0.72 resistance line but is still trading above the 13-day and 20-day moving averages (MA), signalling that short-term bullish momentum is still happening. The RSI momentum indicator is mostly flat, suggesting a balance between supply and demand which could shift in favour of the buyers if the XRP price manages to rise and stay above the trendline. 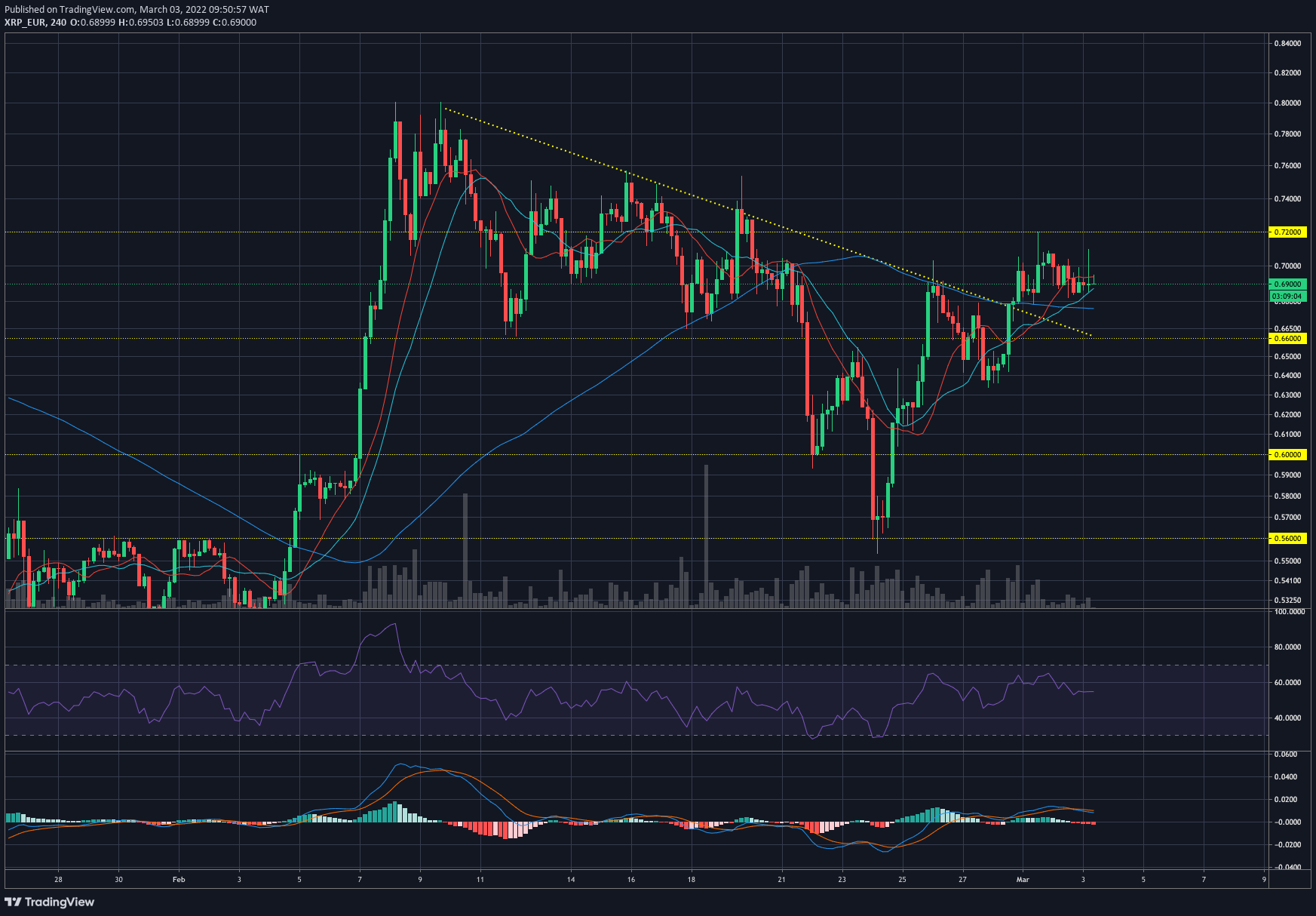 Polkadot also saw some impressive performance with bullish moves. DOT touched €17.65, up around 35% from its local bottom at €12.85. The altcoin now trades above the 13-day and 20-day moving averages, but long wicks are suggesting that the bears are still selling at higher levels. The RSI is just above the midpoint, indicating possible range-bound action in the near term. 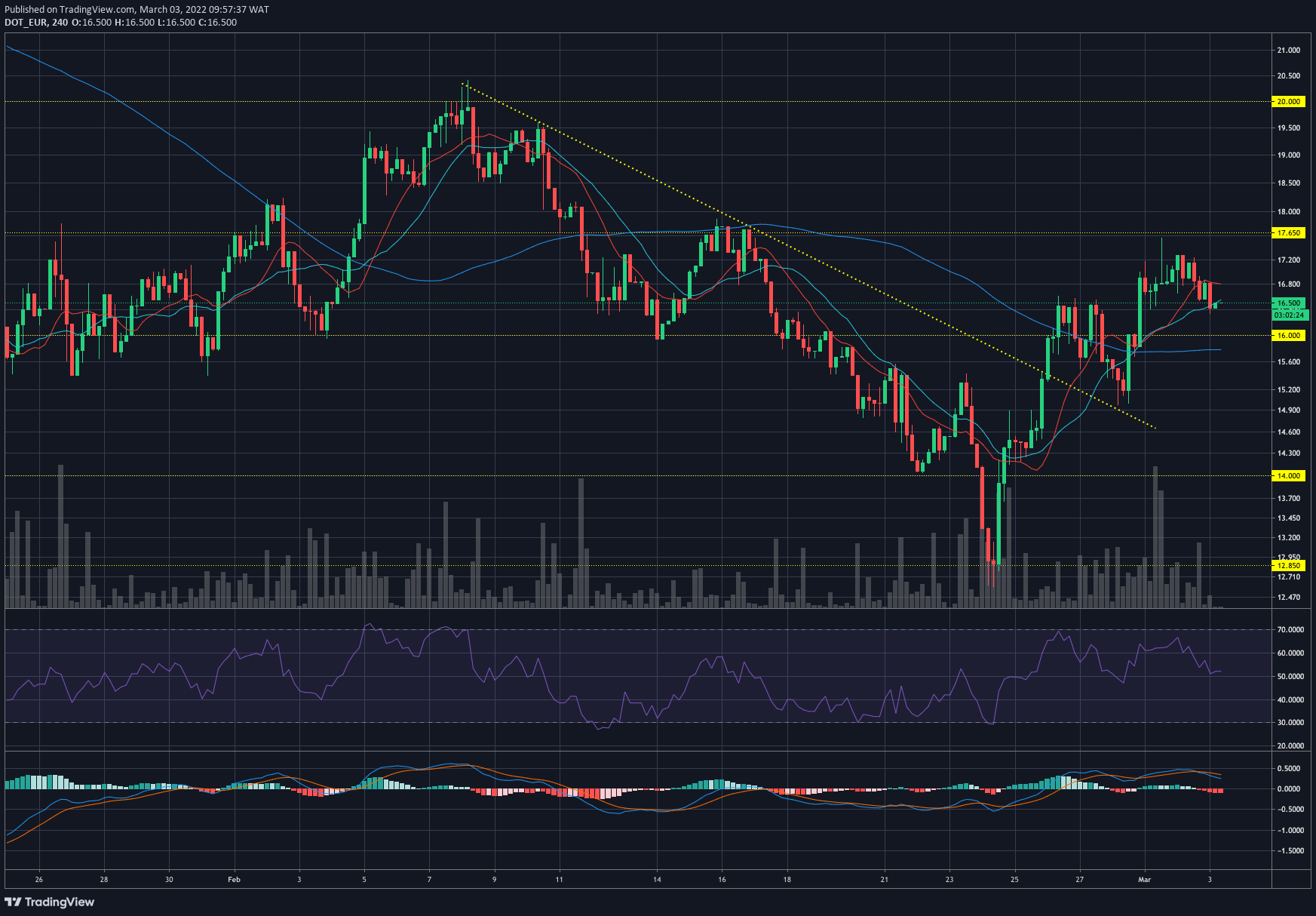 The Crypto Fear & Greed Index is back to neutral

Russia’s invasion of Ukraine has also been affecting market sentiment and the broad financial markets are subject to risks related to the war’s developments. However, given the circumstances, even comments and news reports could influence market sentiment.

Over the past week, the Crypto Fear & Greed index has risen from 23/100 to 33/100, reaching 39/100 on Thursday, shifting from a zone of extreme fear to a more neutral but still fearful area, as investors are hoping for an agreement between the countries.