During the first week of March, the crypto market was mostly range trading and Bitcoin closed with a bearish-looking candle. Major cryptocurrencies have been trying to find local bottoms, which would translate into reversal momentum after plunging at the beginning of the war in Ukraine. The global community is still closely following the conflict, looking forward to a resolution. The Russia-Ukraine war is bound to bring heavy economic consequences for the crypto market as well as for the broader financial market.

Most cryptos started the week on a bearish note, but surged on Wednesday after the remarks by the U.S. Treasury Secretary Janet Yellen were inadvertently published, revealing that President Joe Biden's impending crypto executive order would take a constructive approach towards regulating the industry.

After this bullish news, Bitcoin surged and the broader crypto market followed suit, with some altcoins reporting almost double-digit gains.

On the daily charts, Bitcoin is creating a higher low – higher high formation, indicating that (as long as this trend holds) the price could move even higher. The strong selling pressure formed a large candlewick at the €40,000 resistance level, which is an important level to watch. Momentum indicators are slowly moving towards bullish territory, but any change in the geopolitical situation could bring the trend down again.

The Crypto Fear & Greed Index shows that market sentiment remains pessimistic, hovering between fear and extreme fear. With the escalation of the Russia-Ukraine war, the crypto market sentiment has gone from 48/100 recorded last month to the current 22/100. Historically, times when retail investors have become pessimistic have proven to be good ones to buy. 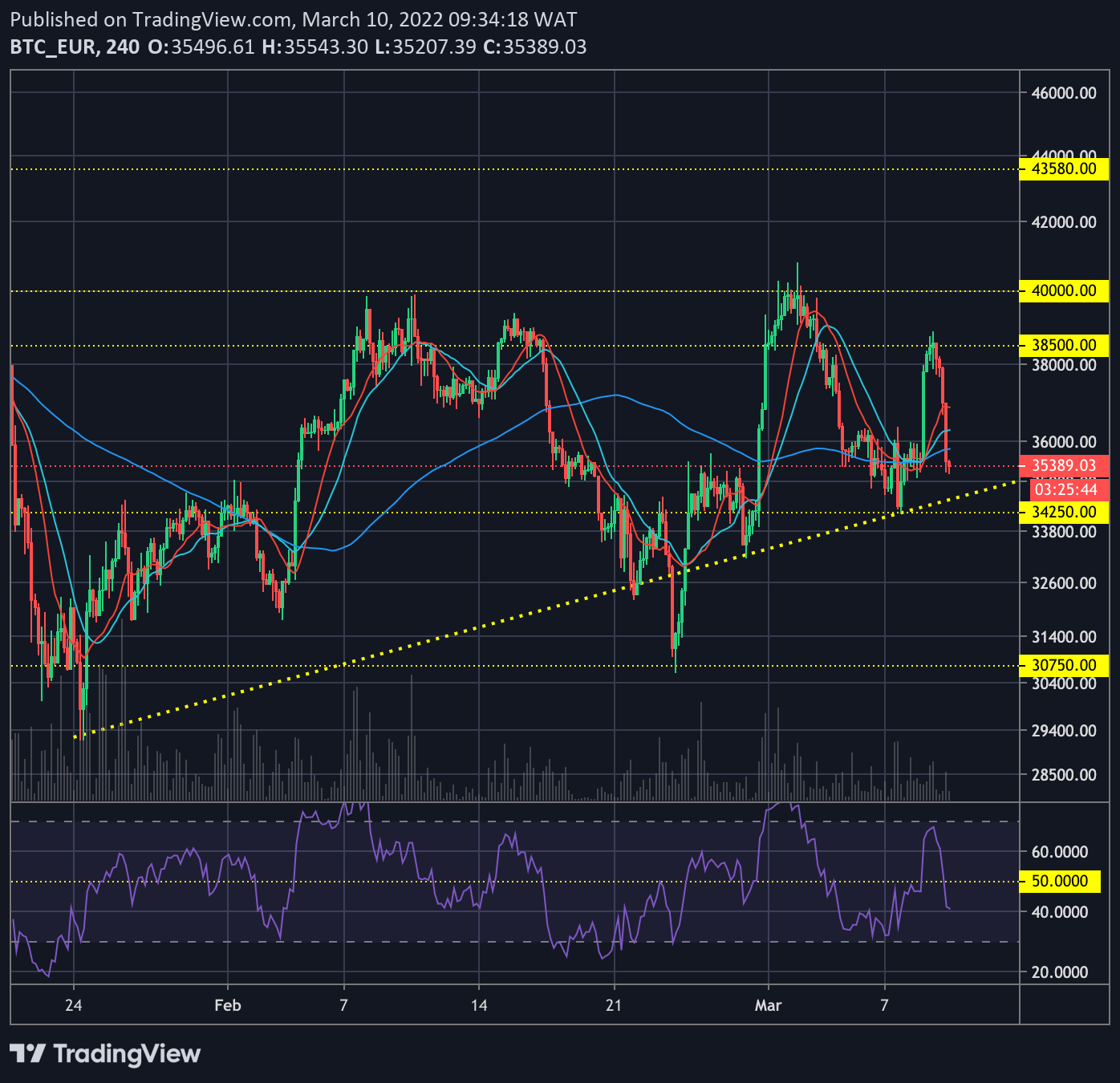 In the past week, the crypto and global markets remained volatile, though not as much as seen in previous weeks. Bitcoin’s rollercoaster-like price action had an effect on major altcoins which also saw similar price movements.

Ethereum failed to break the resistance trendline and remained in a bearish channel below the €2,500 resistance level. ETH is now trying to print a higher-low, which could turn the trend bullish. However, the most important support level is at €2,050, the lowest level since January. 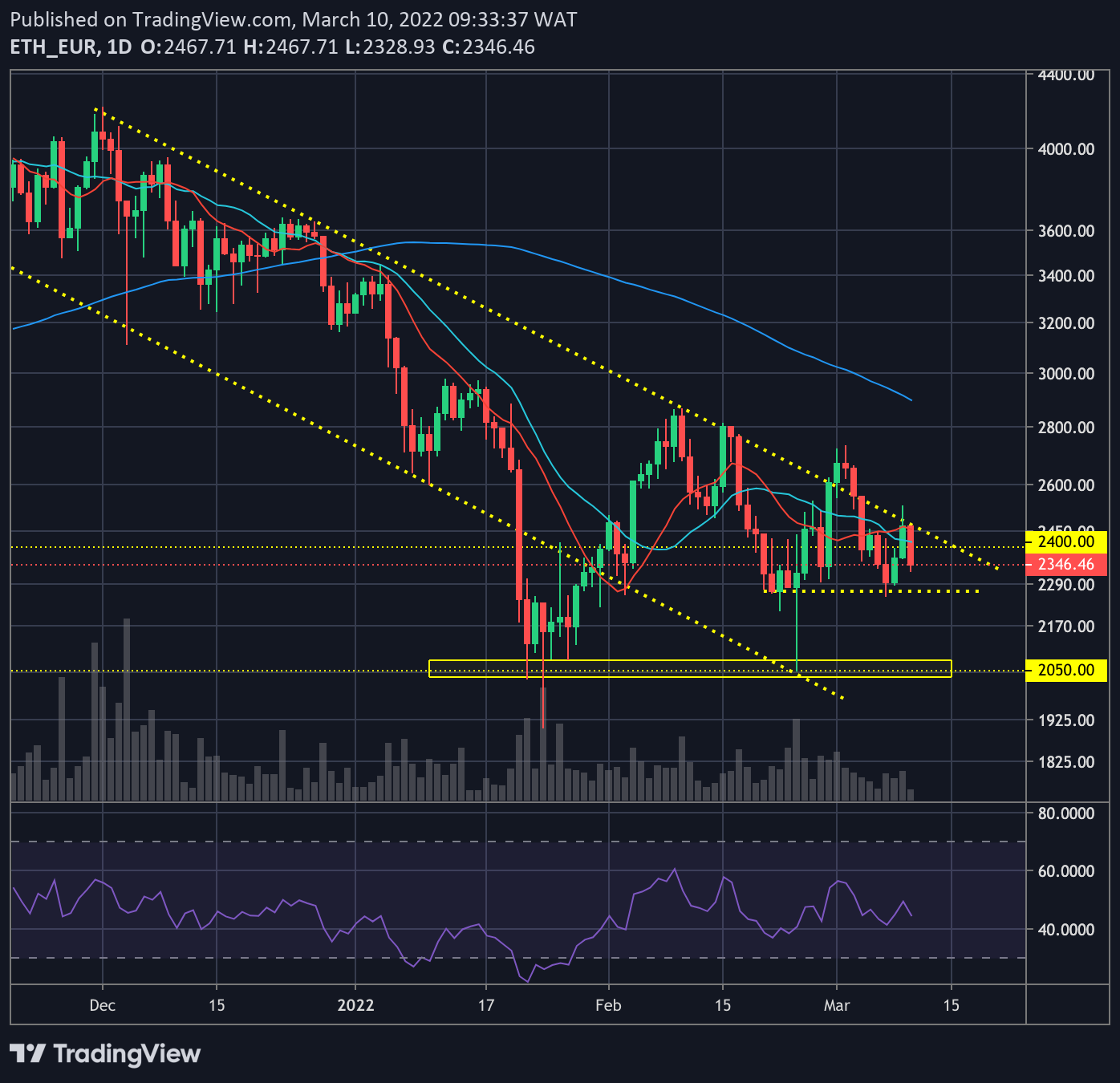 Buyers are trying to push ETH above the resistance trendline, which is the first obstacle to overcome in order to turn the trend from bearish to bullish.

The accumulation zone on a price chart is characterised by mostly sideways price action movements. Technical analysts see these movements as indicative of large investors buying - or accumulating - a large number of tokens over time.

The accumulation zone is important for investors to decide whether to buy or sell, aiming to see if a price has momentum and which direction it is going in. Ripple’s volume increased over the past 3 weeks, while in the past 7 days its price has been ranging between the resistance level at €0.72 and the support level at €0.63. Increased volume at a steady price is another typical feature of accumulation zones. A breakout from this range will likely be a high scale one. 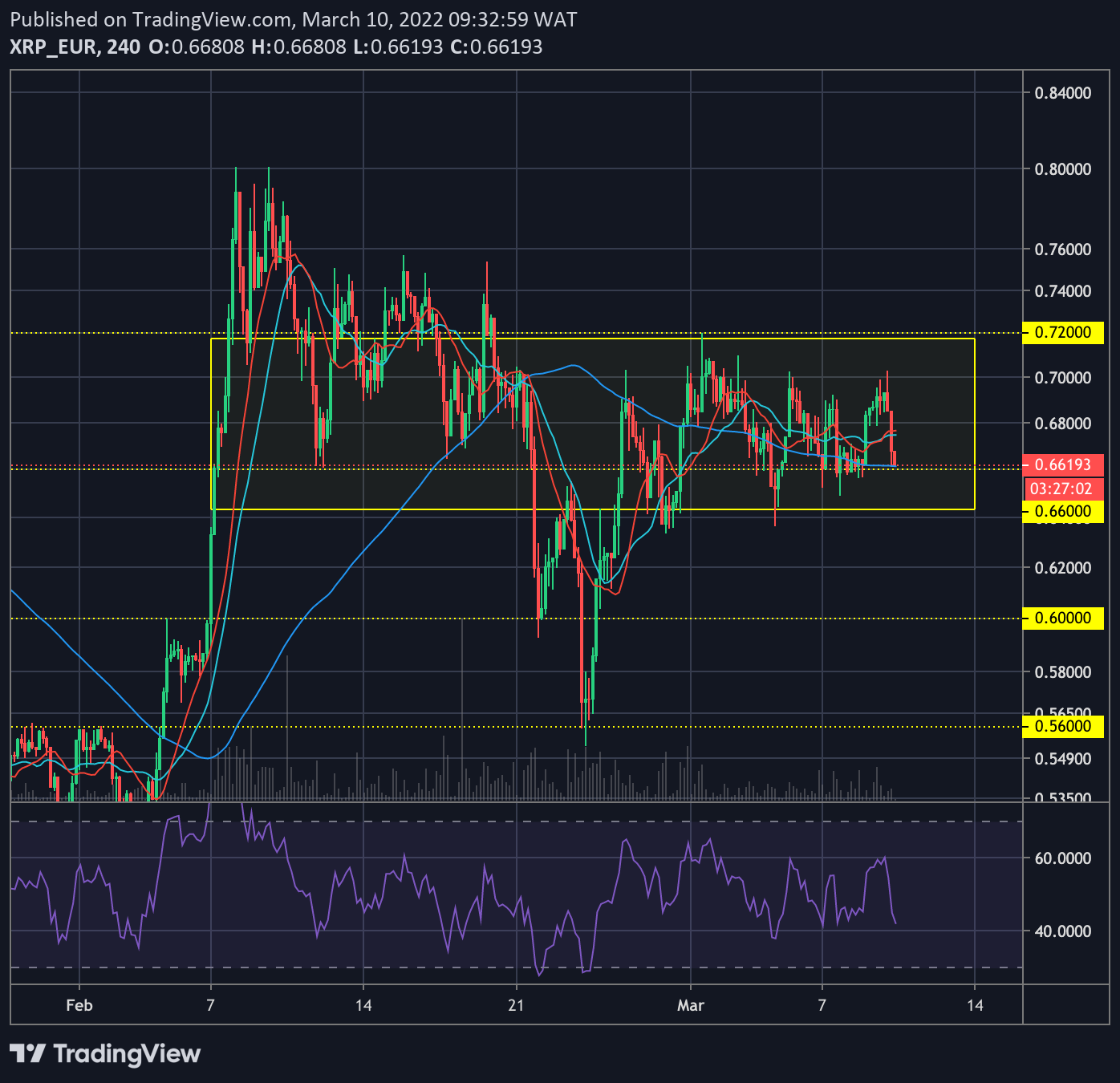 ADA surged along with the broader market, but the price is still under the moving averages and the RSI momentum indicator is in negative territory, indicating that bears are still retaining control. 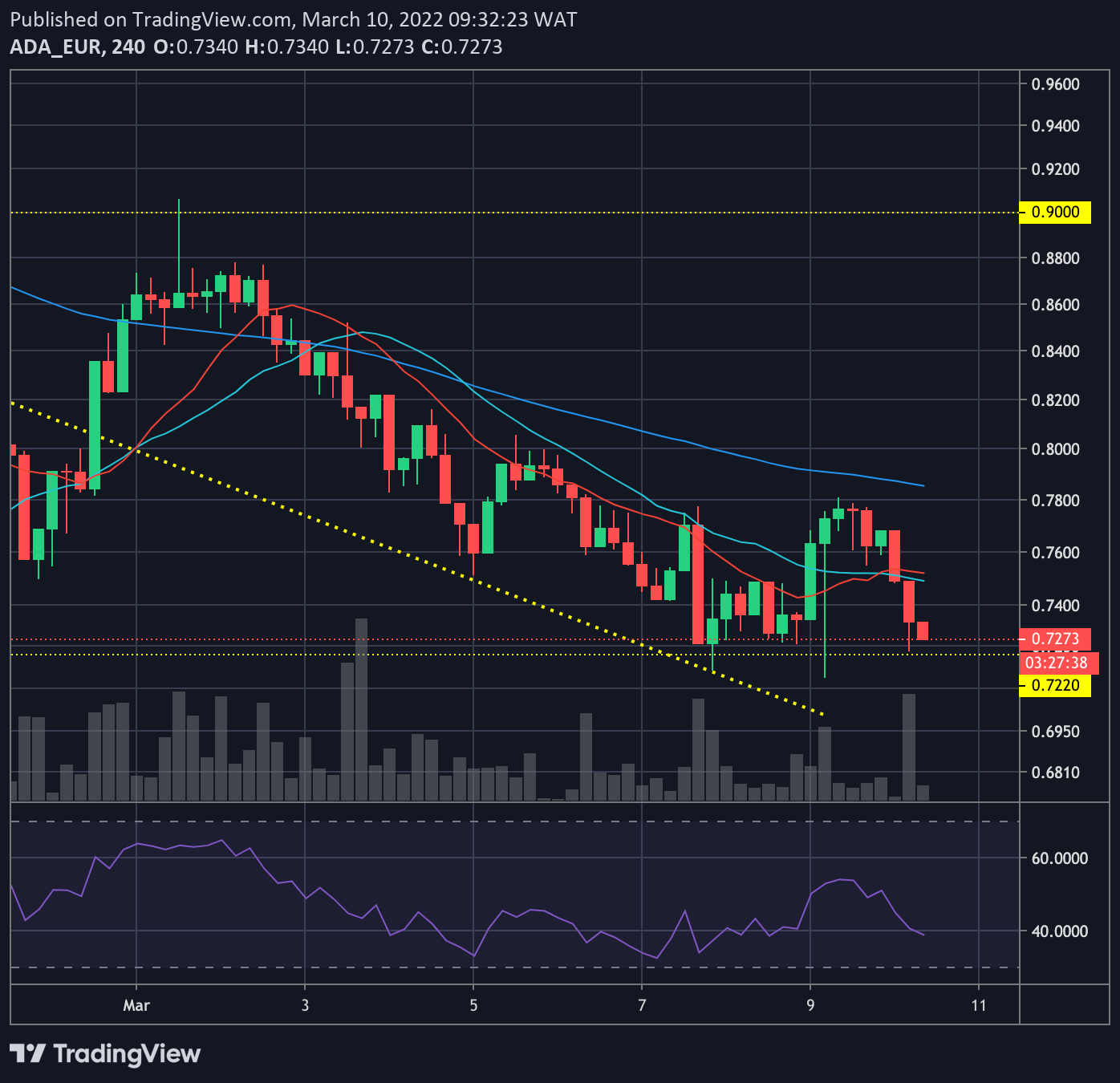 Cardano bulls would need to push ADA towards the breakdown level at €0.9. A break and close above this level could be the first sign that bulls are back in the game.

Along with Bitcoin surging, altcoin charts showed high gains. LINK broke from the descending trendline and surged to €13. However, bulls lost momentum at this level and the price fell back to €11. 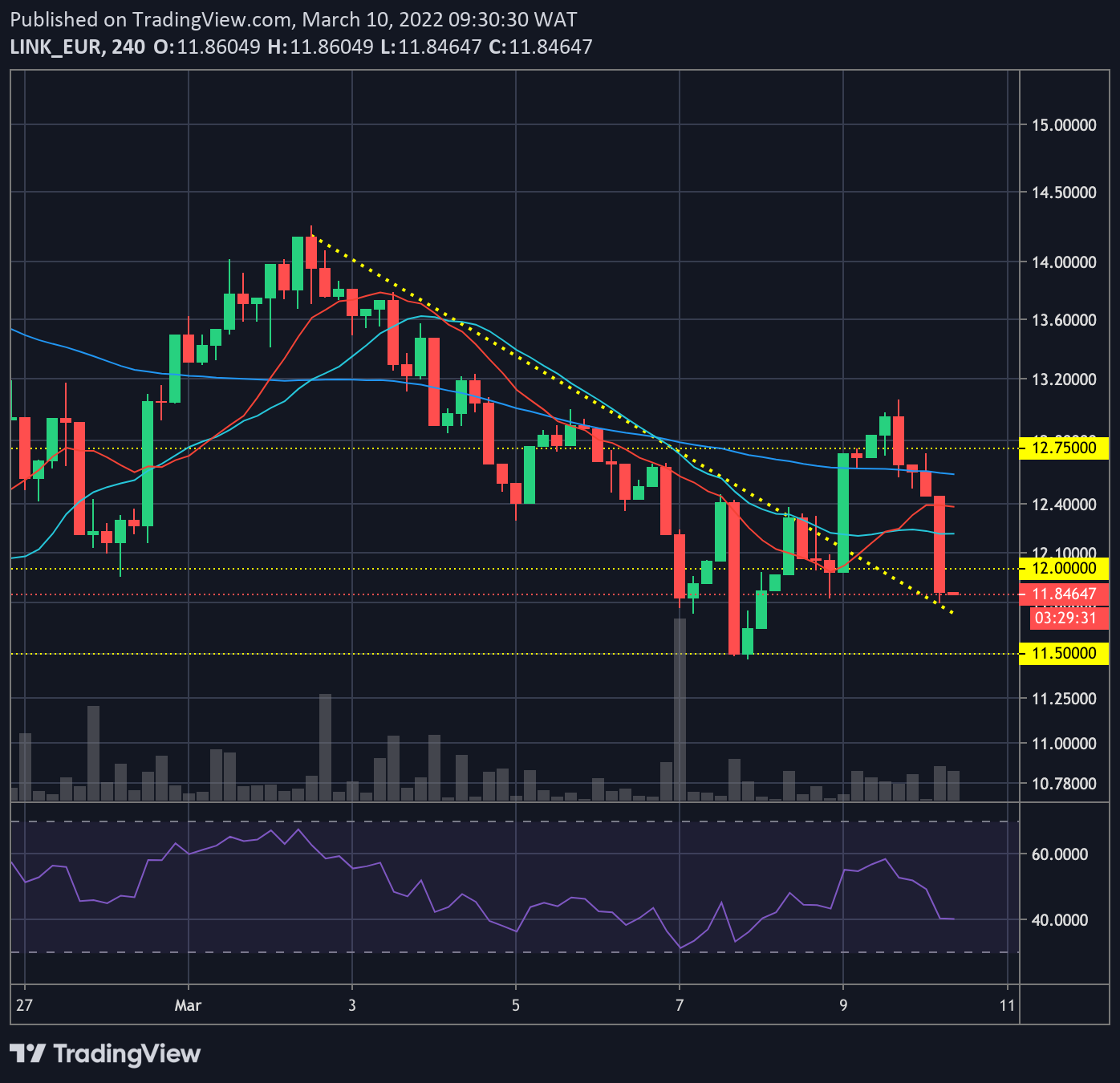 IOTA found temporary support at €0.63, but is still facing upper resistance from the descending triangle on a higher time frame. To flip the trend from bearish to bullish, bulls would need to drive the price above the resistance. 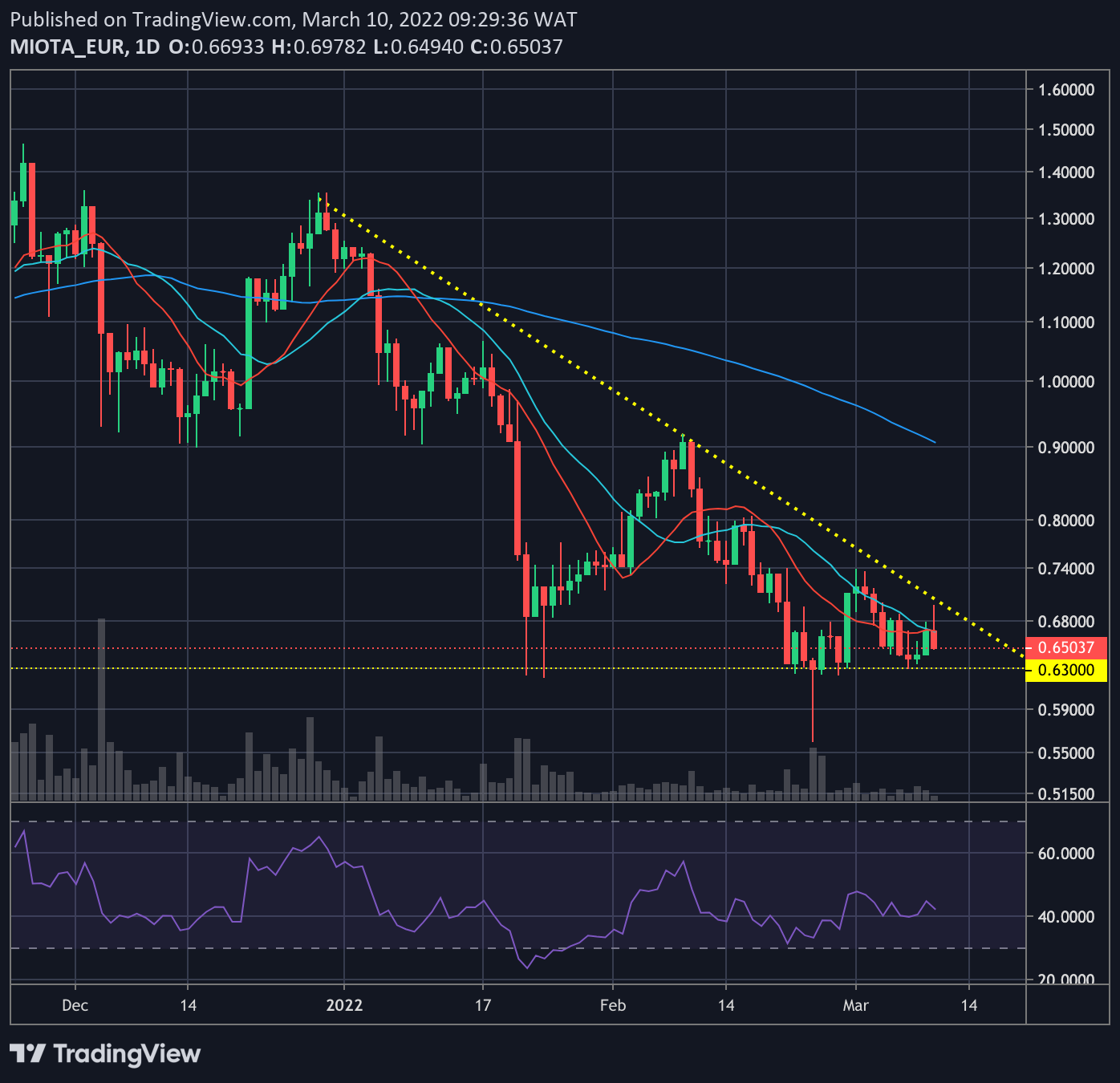 Overall, the crypto market has shown signs of improvement thanks to the bullish move in the middle of the week. However, the situation is still very fragile and uncertain, as multiple factors are in play. The war in Ukraine, inflation and the United States executive order on cryptocurrency are playing significant roles with regard to the developing price action.