The financial world is seeing the effects of the war in Ukraine, now at the end of its third week. The general sentiment is rather negative, and there’s speculation that war isn’t going to stop soon. Bitcoin and the broader market saw mostly sideways movements, with prices showing volatility due to both news and market sentiment changes.

In the past week, three news in the financial world took frontstage: Biden's executive order on cryptocurrency regulations, the U.S. Federal Reserve’s announcement on increasing interest rates, and the European Parliament’s Committee on Economic and Monetary Affairs vote against a potential ban on Proof of Work cryptocurrencies in the Markets in Crypto Assets, or MiCA, proposal. The latter news brings relief to the crypto industry, which was keeping a close eye on the proposal when a potential ban was brought to discussion, as it could have effectively banned PoW-based cryptocurrencies in the European Union.

On Wednesday, the FED announced it would raise the interest rate by 25 basis points: it is the first time since 2008 that the FED has raised the interest rate by this much. However, traders welcomed the decision as bullish, as they were expecting the rate hike to be way higher. Therefore, the news had a positive short-term effect on the stock market, on Bitcoin’s price and overall on the broader markets.

Bitcoin on an ascending trendline since January

Bitcoin has been on an ascending trendline since January 22. The line has been validated numerous times, but not yet broken. Technical indicators are mixed and are more or less in a neutral position, indicating predominantly range trading. Major altcoins have been moving in a similar pattern and are likely to be waiting for BTC to dictate the direction of the crypto market. 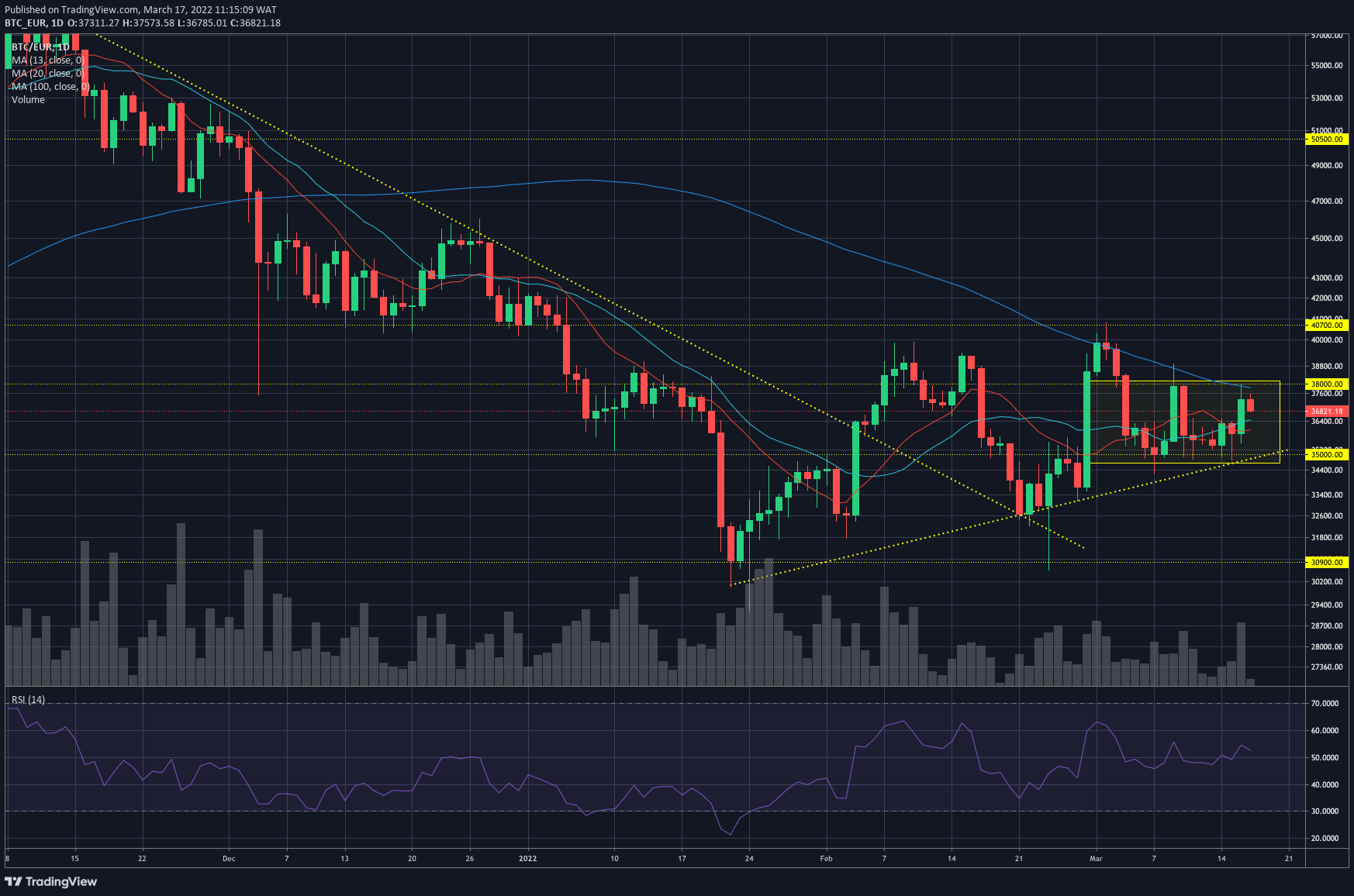 During the past seven days, the Crypto Fear & Greed index has been showing signs of extreme fear and is now at 25/100, still reporting a fearful market sentiment, but slightly improved compared to the 21/100 of Tuesday.

Investors don’t seem confident in the market, but the selling pressure has decreased, leaving space for a hold-oriented approach. Historically, buying during periods of extreme fear has generated positive returns, and better gains than selling in the same market conditions. The index is not a perfect timing indicator of when to buy or sell. Instead, it offers an outlook on when the price of Bitcoin is recognised as low or high.

The Russia-Ukraine war has surely contributed to the highly pessimistic sentiment in the crypto market and the rate hikes announcement by the FED has added to the bearish sentiment - even though investors were expecting worse news, thus the initial bullish acceptance, the higher interest rates ultimately worsened the overall market sentiment.

Most altcoins are following Bitcoin’s movements and are trading in narrow ranges.

XRP failed again to break the upper resistance level at €0.77 and is now sitting on major moving average support levels. The choppy action will most likely end with a breakout from these important levels. 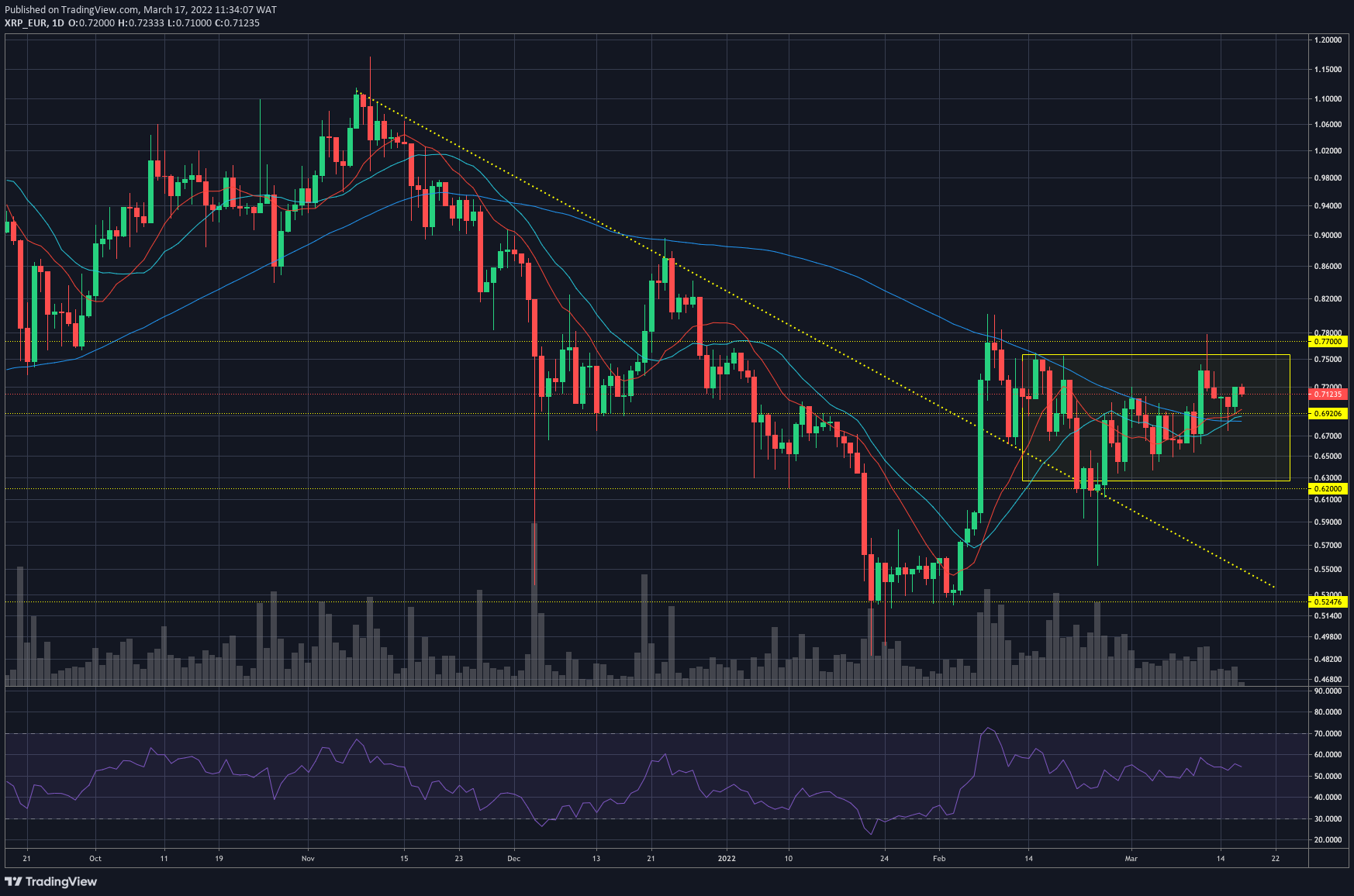 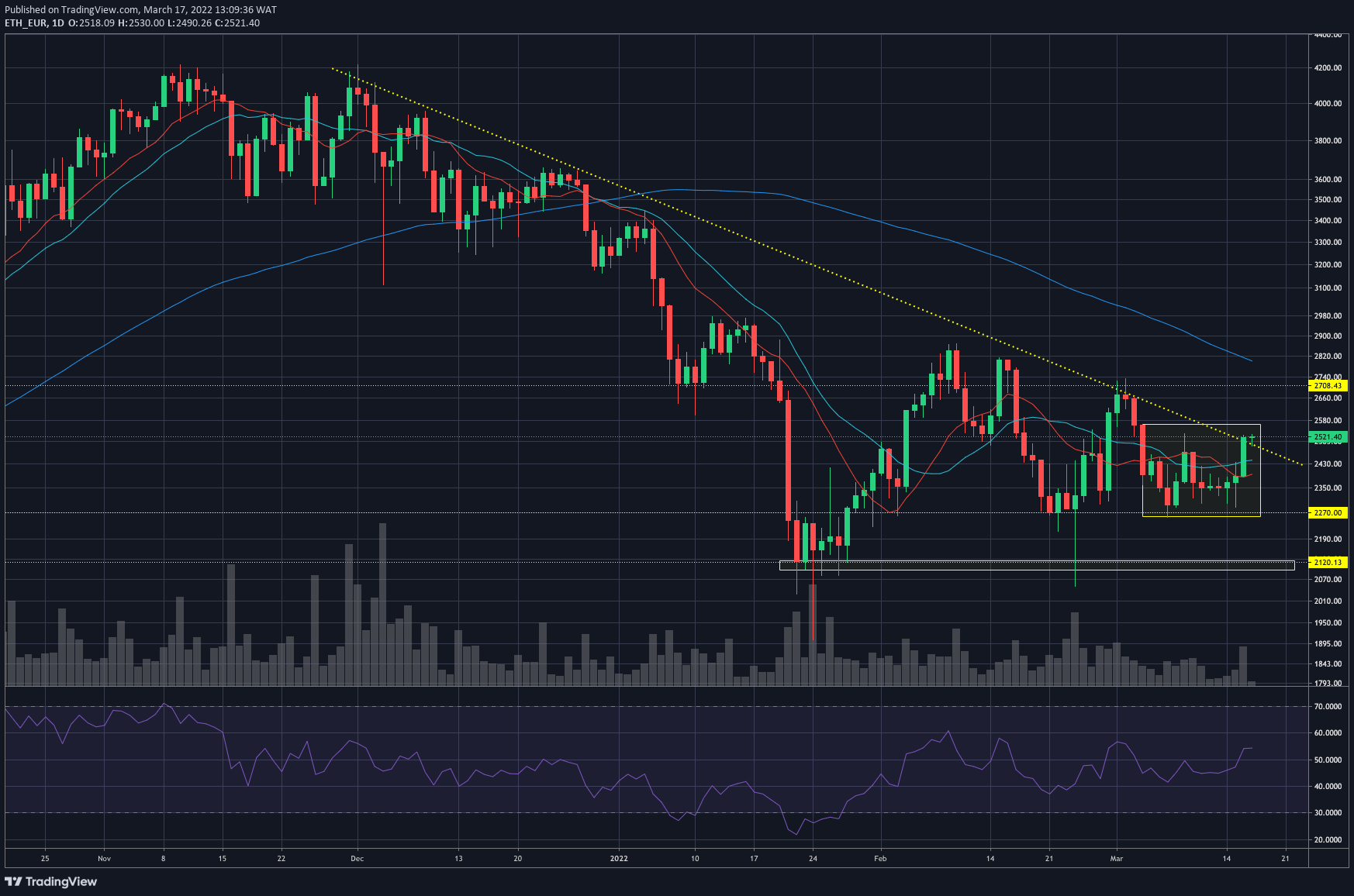 IOTA is moving just under the descending trendline and inside a triangle pattern on the daily chart. The price tested its support at €0.62 several times, but it was unable to turn the resistance trendline into a new support level. The RSI momentum indicator is slowly picking up, but it is still below 50.

LINK surged above its trendline resistance on the daily chart after a bullish action. The price moved above the 13- and 20-day moving averages, a sign of bullish momentum. 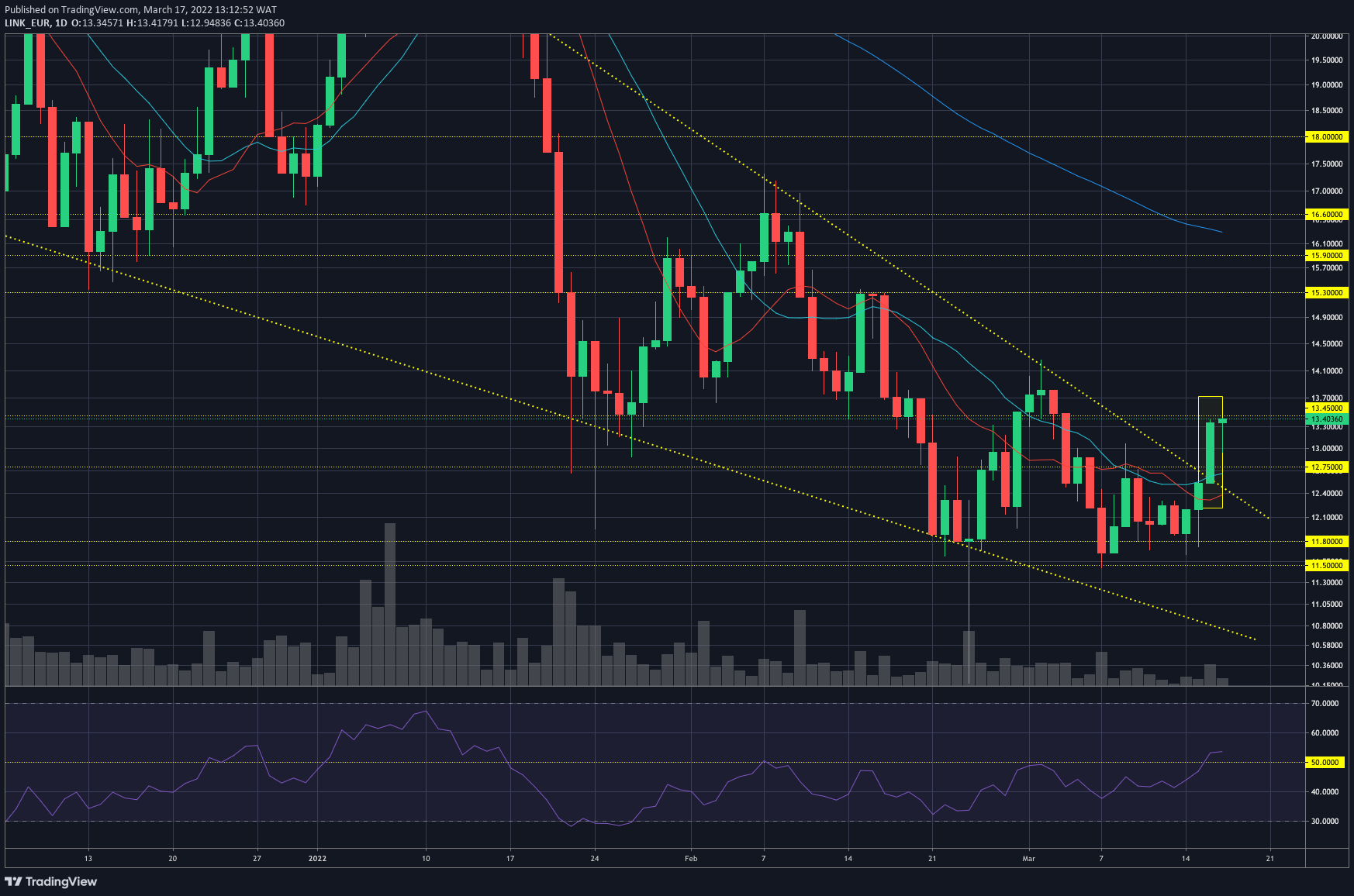 ADA is showing signs of bottoming out after several weeks of price decrease. Cardano bounced from the €0.72 support line and created large candle wicks, suggesting buyers are very active on this level. However, indicators are still in bearish territory. 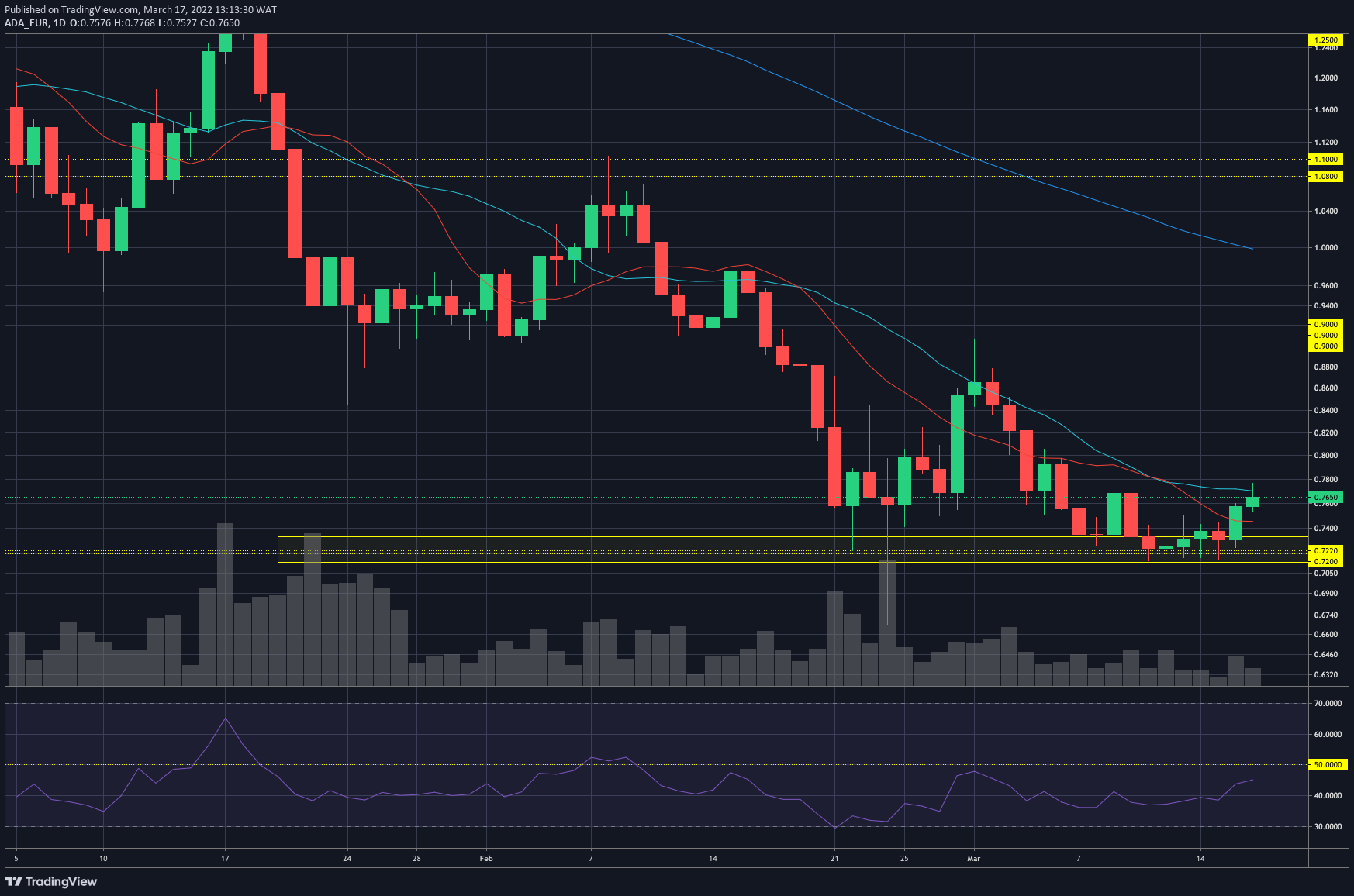 ADA’s price has been underperforming in recent weeks, but Cardano’s ecosystem continues to expand. Currently, over 517 projects are being built on Cardano, of which NFT collections are the biggest share (34.7%).

The total value locked in Cardano’s network has been surging, now standing at around €190 million. The Vasil hard fork, named after Cardano’s founder Charles Hoskinson’s late friend Vasil Dabov, is scheduled for launch in June and it sets out to bring a multitude of scaling improvements for DeFi, DEXs, and smart contracts on the network.