Bitcoin and most major altcoins started the week on a positive note, bouncing off their respective support levels as a macro picture stabilised. Bitcoin printed a bullish candle on the weekly charts and posted around 6% gains in the last seven days, while some major altcoins even posted double-digit gains. The current conditions seem to be favouring a more bullish perspective on shorter timeframes, as investors appear to be less fearful. This week, the Crypto Fear & Greed Index went from 26 on Tuesday to 47 on Friday. The market moved from pessimistic to neutral, slowly moving away from the extreme fear territory of a few weeks ago.

The situation isn’t unexpected, as fearful and extremely fearful market sentiment periods have historically brought reversals to the upside more often than not.

“Buying into the fear” has generated positive returns in the past, giving better results than selling in the same market conditions. The recent range trading is most likely representing part of the potential bottoming process, which strictly depends on the developments on the Russia-Ukraine war.

Bitcoin closed bullishly in the weekly chart and most altcoins followed the bullish moves. On the daily chart, BTC price is maintaining an ascending wedge, slowly approaching a major resistance level at €40,000. In its upward move, BTC even broke the €38,500 resistance level and settled above the 100 hourly simple moving average. 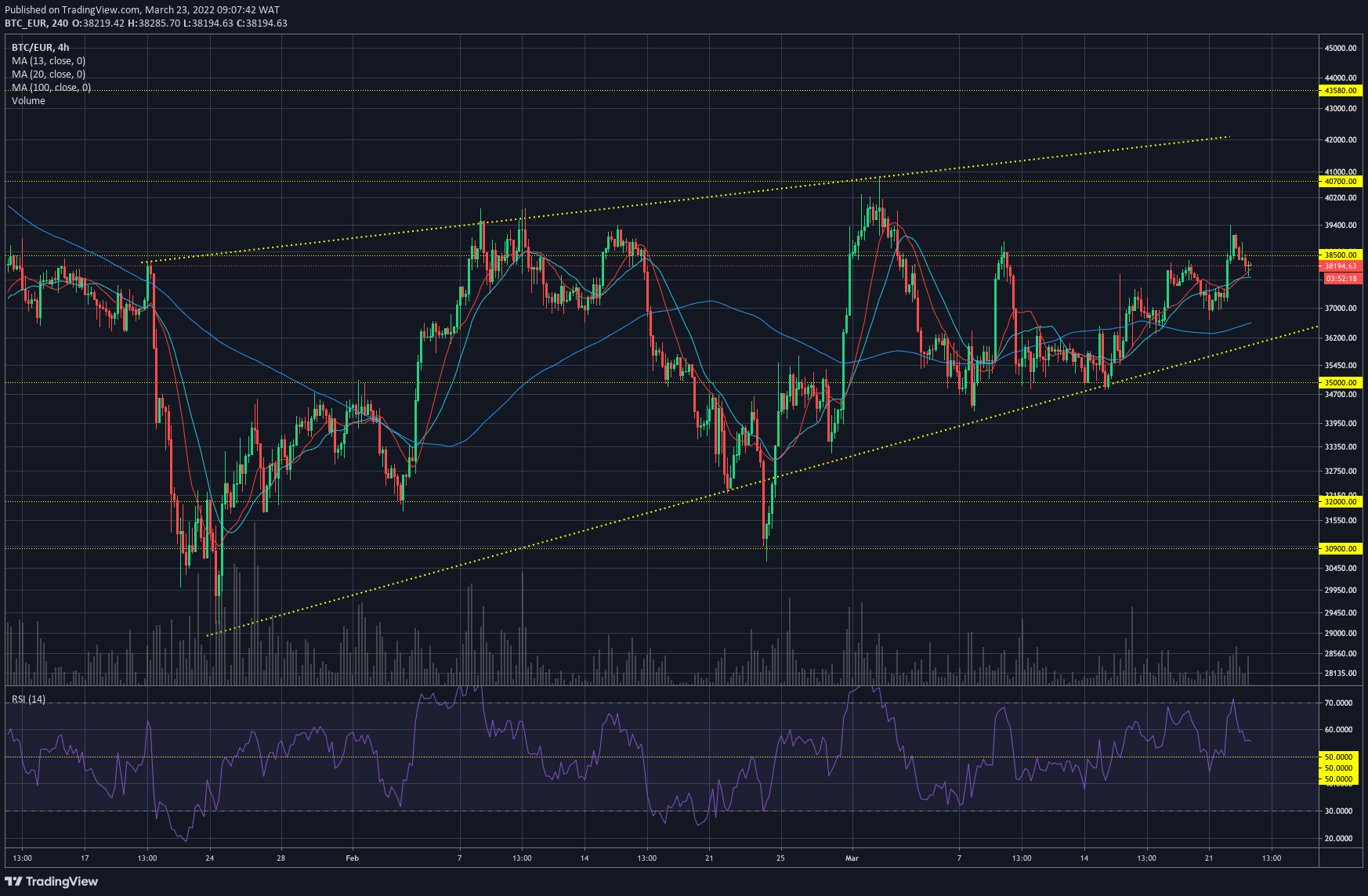 Over the past week, Ethereum doubled Bitcoin’s price growth by posting 12% gains in seven days. ETH surpassed €2,700 for the first time since mid-February and closed with a very bullish weekly candle. The RSI momentum indicator is close to 60 on the daily chart, indicating that bulls are in control of the price. 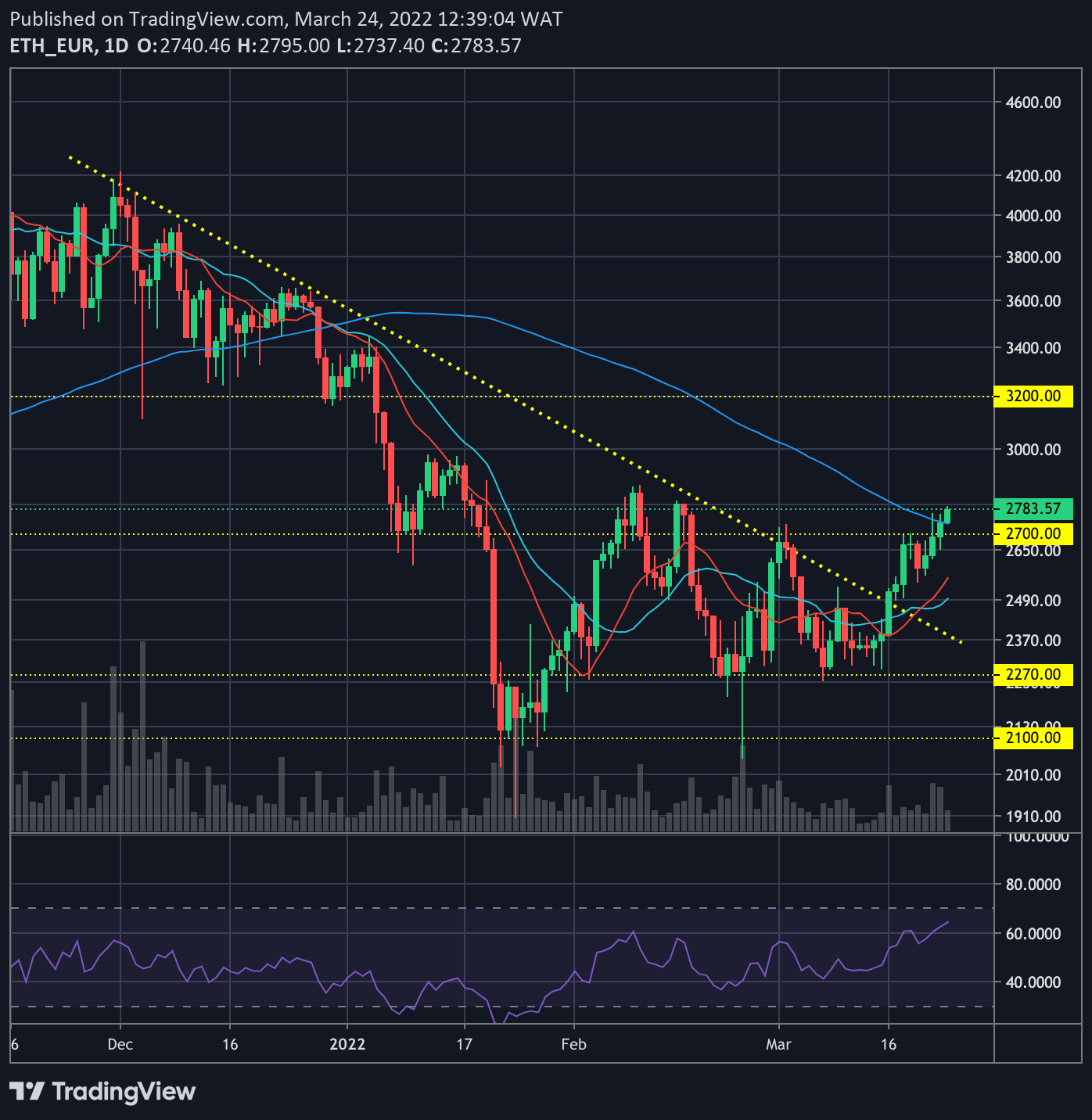 Network data shows that, since the introduction of EIP-1559, Ethereum has burnt over 2 million ETH, worth around €5B. The burning mechanism was introduced with the London hard fork in August 2021. The burning of ETH also opens the network to the possibility of becoming deflationary if enough ETH is burned on a daily basis and more tokens are burned than minted.

Ethereum’s market cap climbed to over €300B last week. The surge leaves Ethereum with a market dominance of approximately 19%, while Bitcoin’s is maintaining around 42.5%.

In the last seven days, major altcoins posted solid gains as investors regained some confidence and transferred funds from Bitcoin to mid and small-cap coins.

Polkadot (DOT) found support on a higher time frame and its price made a higher-high formation, the first bullish sign after a long downtrend period since DOT’s all-time high in December 2021. DOT started moving very bullishly since breaking out of the descending triangle pattern. The same pattern was created last year in July, when DOT bottomed out at €10. The RSI is picking up and is in a strong bullish zone on the daily chart. DOT is now above the 13- and 20- moving averages, showing that control is in the bulls’ hands. 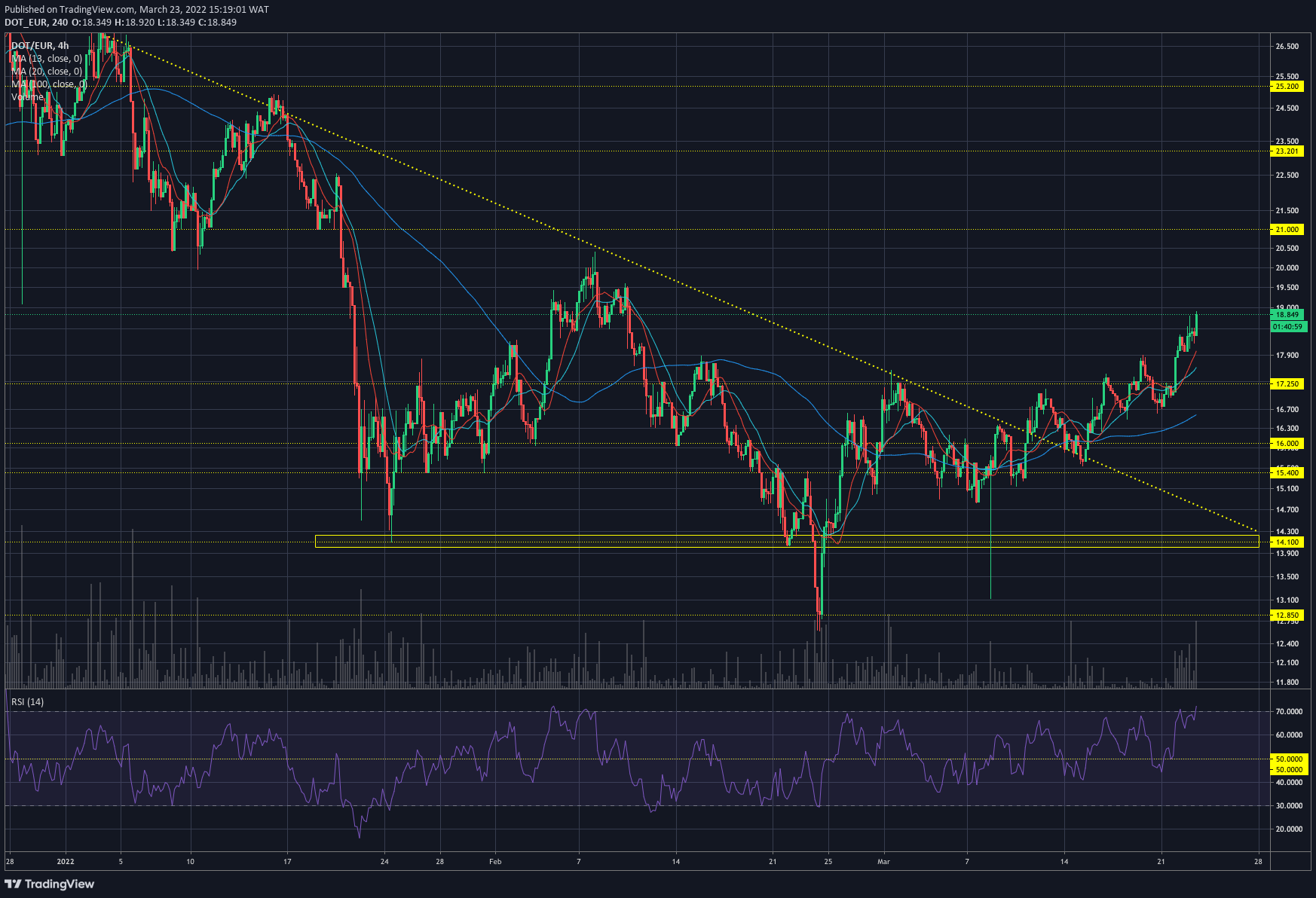 XRP bounced off of the 20-day exponential moving average (EMA), which acts as a support level in bullish movement. XRP’s moving averages have started to take an upside direction and the RSI is in positive territory, indicating that the path of least resistance is to the upside. 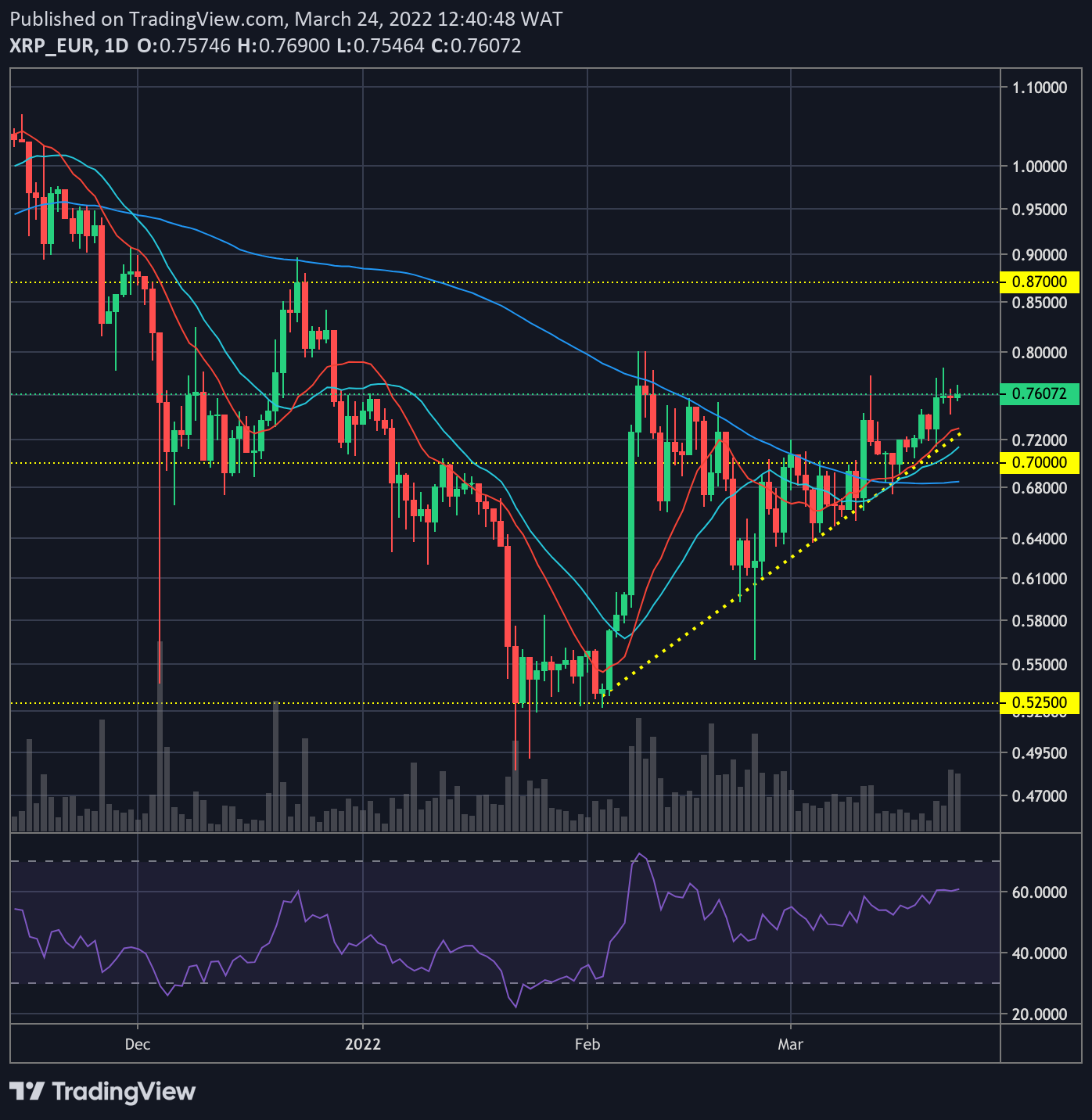 The Arab Monetary Fund (AMF), a sub-organisation of the Arab League, has mentioned the global payments network, RippleNet, as a possible alternative to the central bank digital currencies (CBDCs). 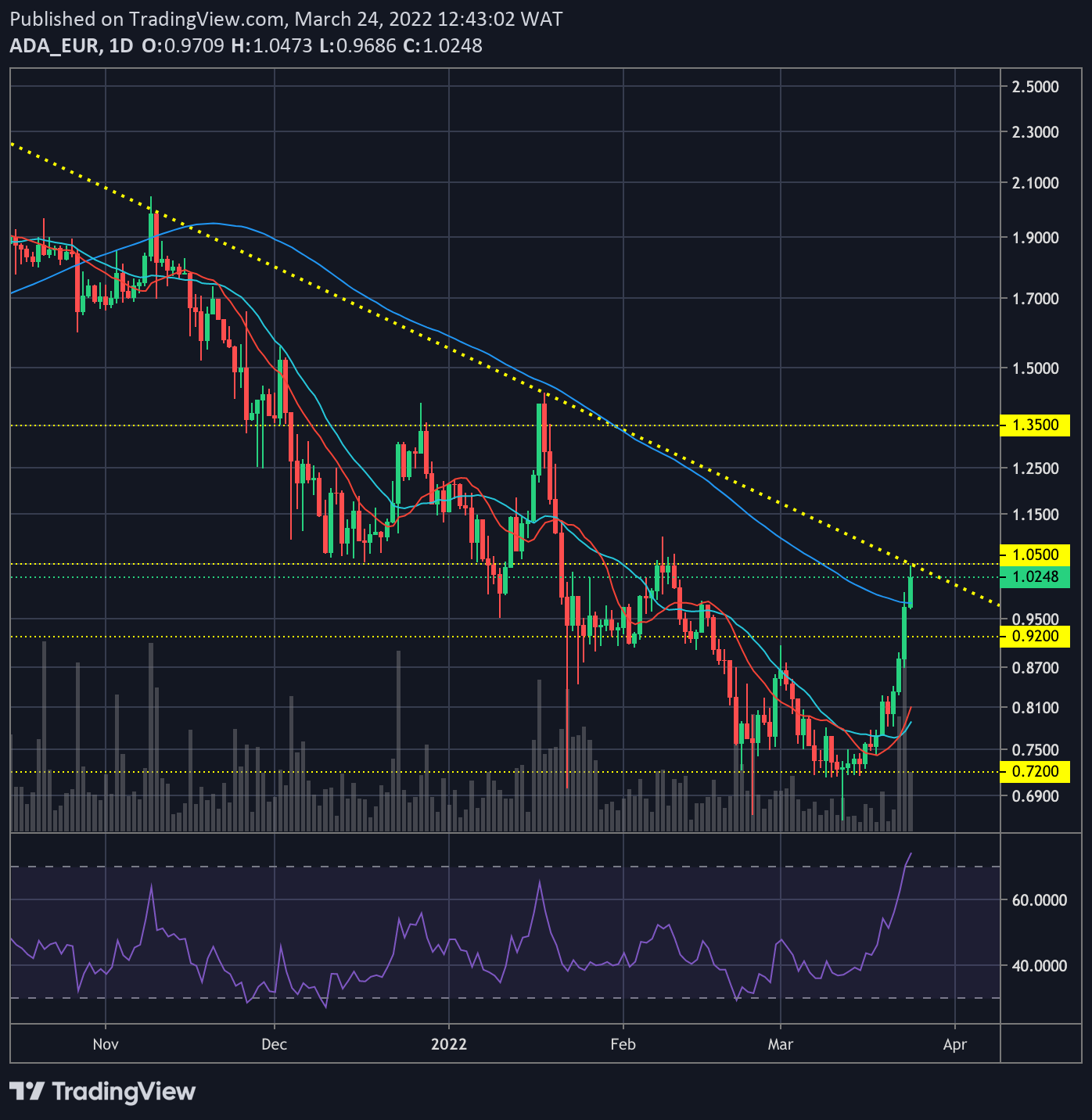 Both ADA and XRP have been gaining traction together with the rest of the market lately, both surging by more than 12% over the past week. The top 10 cryptos breached critical resistance areas and now look like they are headed for further gains - provided that market sentiment continues to improve.

Bitcoin of America, which boasts over 1,800 BTMs across 31 states, announced Dogecoin as the newest addition to its Bitcoin ATM machines. DOGE surged on the positive news, as well as thanks to technical factors. Due to the price gain, Dogecoin has risen to become the 12th largest cryptocurrency by market cap. 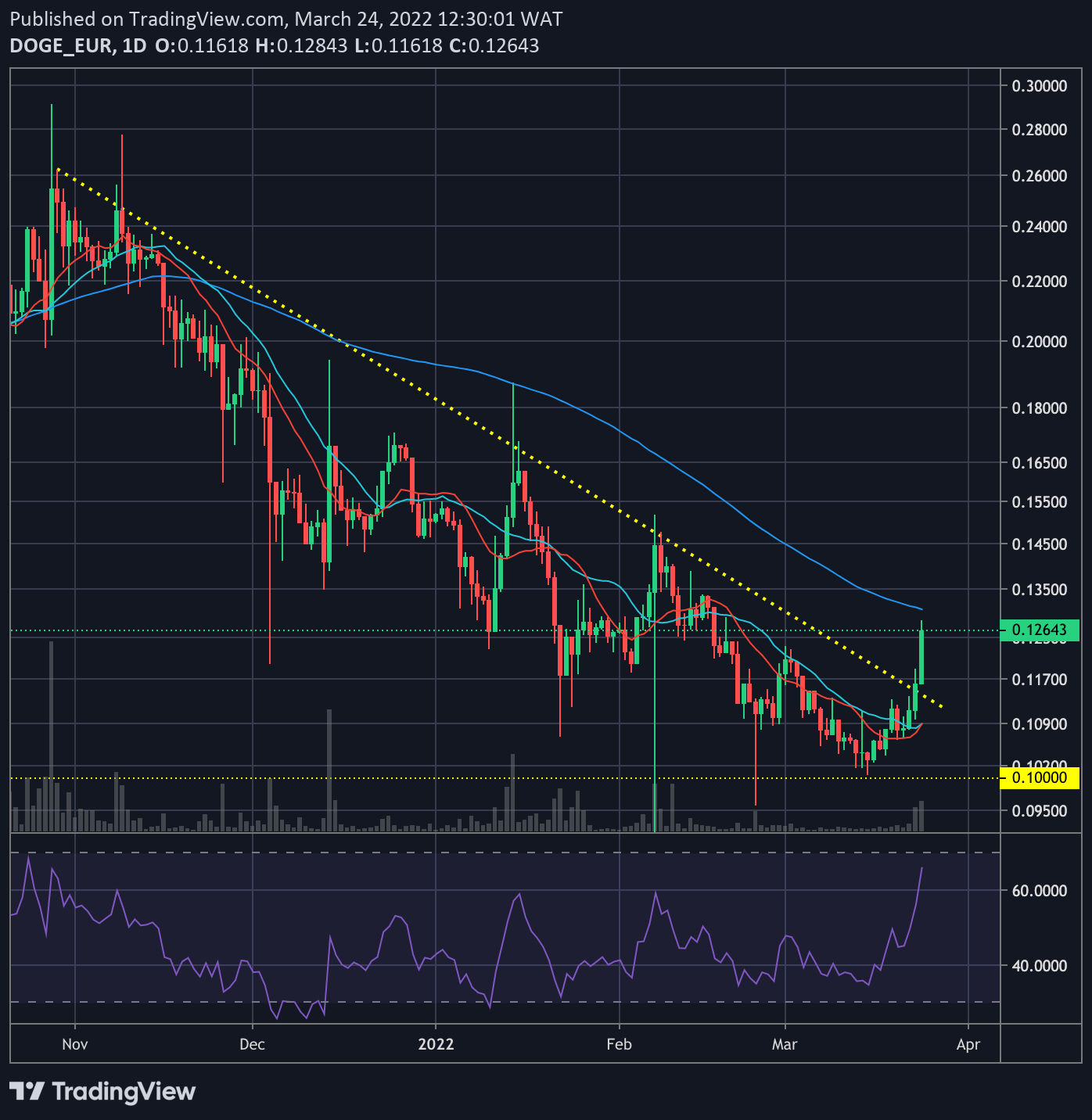